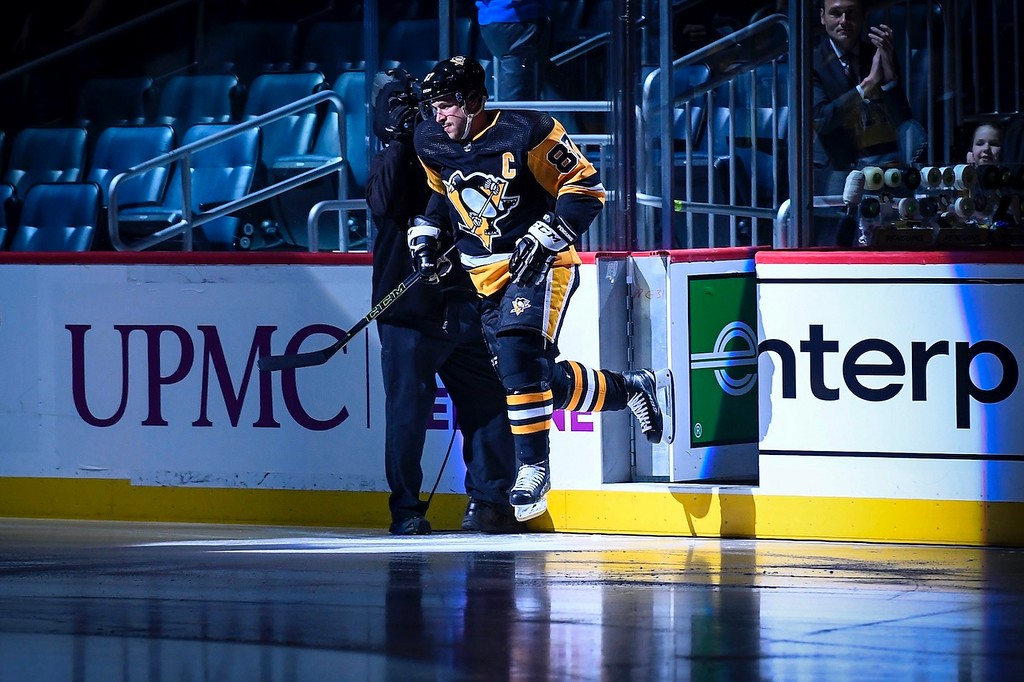 BOSTON -- It's entirely possible that, by the time the Zambonis complete their final laps here tonight at TD Garden, the most compelling quotes I could cull about the Penguins would come from the Bruins' locker room.

It's been kind of an undercurrent of late, in case you've missed it, all the high praise being heaped by opponents. And this from the past couple weeks alone:

"As objectively as I can look at it, they're probably the best coached team in the NHL," the Senators' veteran defenseman, Mark Borowiecki, piped up pretty much unsolicited Dec. 30 at PPG Paints Arena. "They look flashy sometimes, but they get those chances because their fundamentals are so solid. They put pucks behind the D, their gaps are great ... they just look really responsible. They kind of wear you down, you have breakdowns, and it turns into these fancy Grade-As."

It's come from his coaching peers, too.

"They're the hardest working team in the league," the Panthers' Joel Quenneville offered Jan. 5, also at PPG Paints Arena. "They're relentless in all areas. They have a lot of puck support. They have speed through the middle of the ice. They move in all the right areas. They have great sticks. They have good habits. They work well together. They all play the same way."

It's a much longer list I could compile here. And the Wild's Zach Parise might've topped them all Tuesday night after his team's 7-3 loss not so much with what he spoke but, rather, that he shook his head in apparent disbelief through each syllable of it.

“Their puck support all over the ice was … crazy," Parise would say. "It’s like they always had three guys on the puck, offensively and defensively. They make short little passes up the ice together, and they came at you 100 miles an hour. They made it really tough.”

One gets the point.

Now let's hope the Penguins get it, too.

Because the top takeaway from all of the above should be that the Penguins are, to borrow Sullivan's favorite phrase, "playing the right way." Meaning their way, a way that suits the stars and supporting cast alike. The speed, the skill, the stiffness on the boards, the multiple sticks clogging lanes, the constant communication between forwards and defensemen on pinches, the priority on puck possession ... all of that works, as we've witnessed, with whoever's in the lineup.

The lone variable becomes scoring, though less so, obviously, with Sidney Crosby back.

It's a shame that Jim Rutherford, more than anyone, lost sight of this in the summer of 2018, the victim of an acute case of Tom Wilson-itis. Rutherford didn't go as far in toughening up the roster as some portray, but the Ryan Reaves, Erik Gudbranson and other lesser moves in a similar vein didn't fit with the coach, nor with what worked and won in 2016 and 2017.

It's a credit to all concerned, Rutherford included, that they swung the pendulum back to possession. And it's no coincidence that credit's now coming from all over.

• Another credit to Rutherford: With Tom Fitzgerald's fresh promotion to interim GM in Newark, all three of the Penguins' assigned potential successors when Rutherford was hired are now peers, including Bill Guerin in St. Paul and Jason Botterill in Buffalo. That's amazing. They all made it, and J.R. himself will hold his position into eternity.

• Worth appreciating, too, that the Penguins are blessed with stability at Sullivan's position. Seven head coaches already have been fired in the NHL, including Gerard Gallant yesterday in Las Vegas, which is nuts even by this league's standards.

It's also counterproductive. For every Craig Berube -- or Sullivan, for that matter -- who comes along at midseason and carries his team to glory, I'll show you a dozen or more Gallants being fired in favor of some perennial retread like Peter DeBoer. And soon enough, that franchise will just lose its way again, only to fire the next guy at the next prolonged slump.

• Seriously, what were the Golden Knights thinking?

Eighteen months ago, Gallant conducted one of the great coaching performances in NHL history by guiding an expansion team to the Stanley Cup Final. They were right back in the playoffs last season and had a winning record this season, tied with the Jets for the eighth and final playoff spot in the West.

Yeah, they've lost four in a row, including to the Penguins last week despite dominating possession, but they'd been 8-2-1 just before that, good for first in the Pacific Division.

• Ron Francis shouldn't have needed more than six seconds to call Gallant for the Seattle job.

• Chief reason for all the retread hires this year, though no GM will admit it: After the Bill Peters fiasco in Calgary, no one has time to properly vet some newbie for prior indiscretions.

• Art Rooney II met with reporters, including our Dale Lolley, yesterday on the South Side, and the session wasn't super-newsworthy. So I found myself most struck by this single line in Rooney's advocacy for an upgraded running game: “In a place like Pittsburgh, running the ball, being able to, is a factor. It should be.”

It isn't, of course, and it doesn't take extreme football analytics to determine that. But man, I'm such a sap when it comes to franchises branding themselves with an iconic identity that I just loved the sound of it. It's Franco, Rocky and a 2.3-yard cloud of dust for all-time, baby.

Or should that be 32, for the number of years No. 31 had to wait for his Hall of Fame induction despite 51 career NFL interceptions:

The debate will endure forever as to whether the Steelers of the 1970s are represented appropriately, either too few or too many. But that's 10 now, and the only other name that could still reasonably floated is that of the late L.C. Greenwood, and it'll be a tough, if not impossible sell at this late stage.

Or wait, will it?

It's never easy to call attention to scouts, but the late Bill Nunn was the most influential of all those behind Chuck Noll's drafts and amateur acquisitions, with a hard focus on finding talent at predominantly African-American colleges, most of which were underserved in that era. Nunn, Noll and the Steelers were pioneers in that regard and, obviously, were rewarded handsomely with the results.

Read up on the man's legacy, beginning with being born and raised here in Homewood, to see why he'll have a real chance to join all those players.

• Honestly can't decide if it's more impressive that the Steelers of the 1970s had 10 Hall of Famers, or that half of those were part of their rookie class in 1974 alone. Lynn Swann, Jack Lambert, John Stallworth and Mike Webster were four of their first five choices -- greatest class of all time, any sport -- and Shell, of course, went undrafted.

• Pushing back into the present, the Steelers' nine-minute sights/sounds video capturing the 2019 season, released yesterday, is wonderful:

• Professional sports can continue dismissing or downplaying concussions, and elite talents like Luke Kuechly can keep calling it quits at age 28, further damaging the brand while rightly preserving their own health.

It's not just football, either, as I often point out. The stories the Pirates' Francisco Cervelli told me last summer, back when he'd initially expressed that he'd never catch again, were scary. I wouldn't wish those scenarios on anyone. But there he was, a week later, calling our conversation 'a misunderstanding' and, a couple months later, right back behind the plate with the Braves. Now, he's got a new deal with the Marlins.

Good for Kuechly. I'm happy for him. And I'll be happier still when Cervelli, a man I know and admire, makes a similar call.

• I'm all about the surging Titans, the latest classic case of the NFL team that steamrolls into the playoffs and never stops. And I'm that much more about them after how Mike Vrabel, once a spare part with the Steelers, humbly conducted himself yesterday in Nashville at the AFC Championship Game press conference.

"We can't change what we've done to get us in this position, to have this opportunity," Vrabel told reporters there. "On October the 15th, we were 2-4. I was a bad coach, and this was a bad team. We tried to believe in each other, we tried to improve, tried to prepare, trust each other, execute and that's what's gotten us here."

He also dumped Marcus Mariota in favor of Ryan Tannehill, but all above points stand.

• Yes, the Titans can win in Kansas City. No, the Chiefs really shouldn't lose. But yes, Andy Reid's still their coach.

• Nick Bosa and the 49ers' line will annihilate Aaron Rodgers.

• Neither the Astros nor the Red Sox lifted so much as a noble pinky finger through the firings of Jeff Luhnow and AJ Hinch in Houston, then Alex Cora in Boston. Rob Manfred and Major League Baseball knew there'd be no way for the cheaters to resume their jobs, so the nine-page report and the Houston suspensions simply set up the owners to look like semi-tough guys in cleaning their own slates.

Why should the owners have been handed such an opportunity?

Simple: The commissioner, as in all sports, is employed by the owners.

For all the praise Manfred's received, compared to the panning Roger Goodell received for the NFL's coddling of their own resident cheaters in Boston, Manfred's handling of the owners was virtually no different. He went after the GM, the managers, and no one above or below. If anything, the baseball owners got off lighter than Robert Kraft.

• Signing off now before anyone in this city reads this and tries to waterboard me with Dunkin'.

• Tomorrow's Grind will be all pucks, obviously. I'm here for the game.