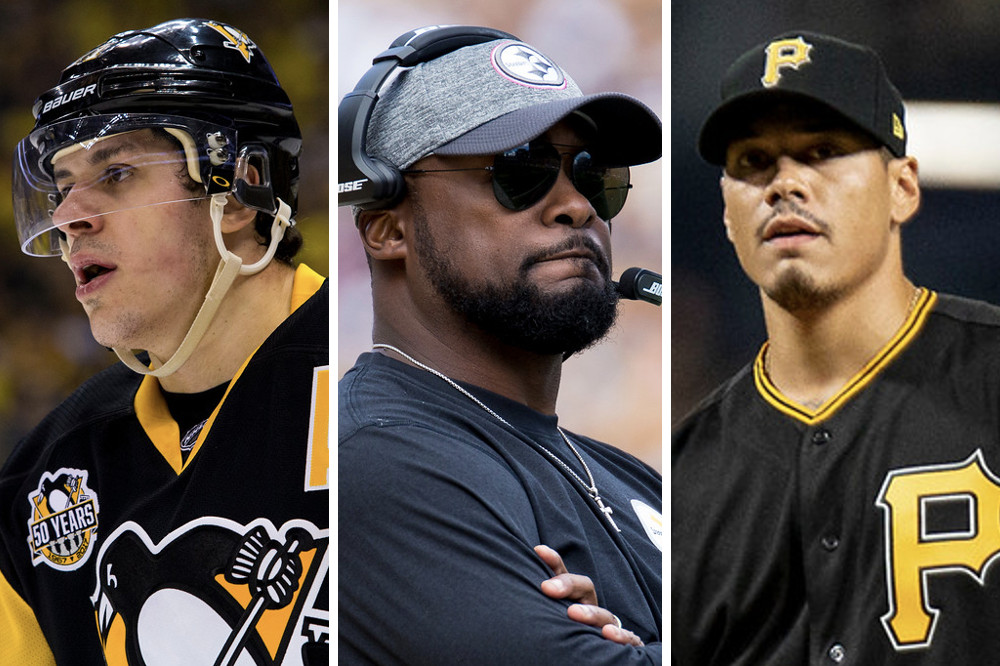 The past three guys to serve as Jim Rutherford's second-in-command -- Jason Botterill, Tom Fitzgerald and Bill Guerin -- are running NHL teams these days, and Rutherford believes they won't necessarily be the last of his proteges to move on to a general manager's job elsewhere.

Next up is Jason Karmanos, who worked with Rutherford in Carolina and who is his lone assistant since Guerin was hired as GM in Minnesota last summer.

"He certainly has the experience, 1) to do a terrific job but 2), to be considered as a guy who takes the next step," Rutherford said. "I'm not sure he gets enough recognition for a guy who can take the next step, but I believe he can."

Karmanos has a somewhat lower public profile than Botterill, Fitzgerald and Guerin, and his portfolio is a bit different from the ones those three maintained -- for example, he isn't GM of the Penguins' farm team in Wilkes-Barre, duties taken on there by coach Mike Vellucci -- but Rutherford said his fingerprints can be found on just about everything that happens in the Hockey Operations department.

"He handles all of his duties very well," Rutherford said. "There's proof of my answer, in that he's been with me so long. He's very, very good at what he does. Some of the duties have been spread. The general manager's role went to Mike Vellucci and Derek Clancey became the director of player personnel, (but) ...  Jason continues to expand his role. I'm careful saying that, because he pretty much did everything in the past."

And no one should be surprised, he said, if the day comes when Karmanos is doing that somewhere else, with assistants of his own.

• They are teammates now, but Jack Johnson and Evgeni Malkin have been opponents at various levels -- youth and professional, NHL and international -- throughout their careers. That gives Johnson a rather unique perspective on how Malkin has been performing this season, and explains why he seems confident that Malkin can continue to operate at a rarefied level, even though precedent says that Malkin's productivity tends to decline after Sidney Crosby rejoins the lineup following an extended absence. "I think the sky is the limit for him," Johnson said. "He's a phenomenal talent, a phenomenal hockey player. I've played against him the way back to under-18s, tournaments in Finland and Belarus, so I've seen plenty of him. He's capable of everything." -- Molinari

• The Penguins' amateur scouting staff will hold meetings in Florida next week, which will give those guys and their wives a chance to spend a few days in nicer weather than they generally have back home at this time of year. Members of the pro scouting staff didn't have it quite so good when they convened for a few days earlier this week -- those meetings were held here, which probably doesn't seem like the ideal mid-winter destination to some. There was a reason for that, though. "They have their meeting in Pittsburgh so they can get a little better feel for the team," Rutherford said, noting that most of his pro scouts only see the team occasionally on the road. The point of the meetings, he added, is to "get everybody together in one place, adjust the evaluations of all players throughout the league and throughout the minors and to take some direction as to what our projections are. Not only now, but a year from now, two years from now." He pointed out that the Penguins expanding their pro scouting staff "make it probably a little harder for Ryan Bowness, our head of pro scouting, to manage, but it certainly gives us more voices, and I really like this group." -- Molinari

• Gerard Gallant, who led Vegas to the Stanley Cup final in its first season in the NHL -- think about what a feat that was -- lost his job Wednesday, apparently because Golden Knights players had begun to tune him out and were, by most measures, underachieving in 2019-20. Gerard doesn't figure to be out of work for long, just as John Hynes and Pete DeBoer weren't after being fired in New Jersey and San Jose this winter, but Vegas management deciding that he had outlived his usefulness to the franchise underscores just how remarkable the buy-in that Mike Sullivan has gotten from his players this season is. In a league in which coaches tend to have have a shelf life approximating that of leaf lettuce, Sullivan has commanded the attention of his players from the earliest days of training camp, which has allowed them to overcome adversity no one could have envisioned going into the season. Sullivan routinely deflects credit for the Penguins' success so far to his players, which is perfectly reasonable and predictable, but without the direction he and his staff have provided -- and their ability to get the players to embrace what they've been shown -- the Penguins might not be competing for anything more than their spot in the draft lottery by now. -- Molinari

• If it sounds like the Steelers are a bit too enthusiastic about potentially being in the Hall of Fame Game, it's because it would probably get them out of appearing on "Hard Knocks." Looking back through the history of both, no team has ever appeared in the Hall of Fame Game and also been featured on "Hard Knocks." So, if the Steelers have their choice between one or the other -- and they won't -- they'll take the extra week of practice at training camp over having cameras keeping track of everything they do at training camp. Teams do have control over what's shown on "Hard Knocks," but it does seem intrusive into the process. And the Steelers aren't interested in opening themselves up to that at all. -- Dale Lolley at Rooney Complex

• Two Steelers, David DeCastro and Maurkice Pouncey, have already pulled out of the Pro Bowl, while another, Joe Haden, is going as a replacement for the Ravens' Marcus Peters, who also declined to play in the game. That leads to the usual cries of, "Just don't play the game." The NFL would be all for that. But the TV ratings for the game show that the fans still want it. Last year's Pro Bowl drew 8.9 million viewers and its market share was 8.6 in Pittsburgh, the second-highest in the country behind Kansas City. By comparison, that was more viewers than any single game of the Stanley Cup Finals last season, including Game 7, which drew 8.7 million viewers, the second-most watched Stanley Cup game in history behind a Game 7 in 1971 between Montreal and Chicago. And nobody is suggesting the NHL just "not play" the Stanley Cup Finals. Don't like the Pro Bowl, don't watch it. That will be the quickest way for the game to end. -- Lolley

• Look for Mike Tomlin to announce a new wide receivers coach sometime next week or soon thereafter. Tomlin will be at the Senior Bowl next week to not only scout the talent on the field, but to scout for a new receivers coach. Ray Sherman took over those duties following Darryl Drake's death during training camp, but Sherman would like to return to his retirement. And no, it does not appear Hines Ward will be a candidate. Ward ticked off some in the organization when he jumped in on the criticism of Ben Roethlisberger's leadership skills on the NFL Network during the Antonio Brown affair last year. Ward and Roethlisberger never saw eye to eye when they were playing. Remember, it was Ward who questioned Roethlisberger sitting out a game with a concussion in 2009. The two have always played nice within the scheme of things, but there was always an underlying unease between the two, even before Ward ripped Roethlisberger for not playing with a concussion. -- Lolley

• It makes sense why both the Pirates and all of their arbitration-eligible players decided to settle rather than go through the arbitration process. Ben Cherington and Derek Shelton have talked about establishing a player-centric environment and rebuilding the relationship between management and coaching and the players. The worst thing they could do is go through an ugly arbitration hearing and potentially burn a bridge with a player, especially since everyone involved, besides Keone Kela, is under team control through 2022. As for the players, their first arbitration year is the most important because their future salaries for the following two seasons are based on how much they made the year before. If they go to arbitration and lose, it could cost them millions of dollars in the future. Settling, even for a little less than their projected salary, is the far safer choice. With that in mind, it's no coincidence Kela, the lone player in his final year of arbitration control, was the only one to get more than his projected salary. -- Alex Stumpf

• It feels like there is a new development every day in the Astros' sign stealing scandal, but the fallout is unlikely to reach Pittsburgh and new bench coach Don Kelly. On Monday, commissioner Rob Manfred said he was operating on the assumption that "virtually all of the Astros’ players had some involvement or knowledge of the scheme," so it did not make sense for him to dole out individual punishments to players. That will almost certainly have to extend to the base coaches, who were not in the dugout when the signs were being stolen. Kelly coached first base with the Astros in 2019 and he was with the Tigers front office from 2017-2018, the other two years the Astros were found to have been stealing signs. -- Stumpf

• Ke'Bryan Hayes told me recently he had a hard time adjusting to the quality of fastballs and breaking pitches he saw at Triple-A last season, and while he has worked on his mechanical issues, he is also tweaking his approach a bit. He said he is going to be looking to drive the ball to the opposite-center field more next season, with the mindset that if he waits on the pitch a little longer, he will make better contact on offspeed pitches and still drive fastballs. He said he started using that strategy more in the later parts of 2019, and he hit .313 with 3 home runs, 15 RBI and an .806 OPS in August and September with the Indians. Josh Bell had a similar strategy going into his breakout campaign in 2019. -- Stumpf

• Everyone's pumped about five-star 2022 guard Jalen Hood-Schifino verbally committing to Pitt, and rightly so. While many feel he could be swayed to the Dukes/Kentuckys of the world by the time he graduates, I've previously reported that, so long as Jeff Capel is at Pitt, Hood-Schifino will be, too. Some fans still want it to happen now, and they're wondering if Hood-Schifino could reclassify for the class of 2021. Nope. A source close to Hood-Schifino tells me there is "100 percent no chance" of that happening. "He's staying with the class of 2022." -- Hunter