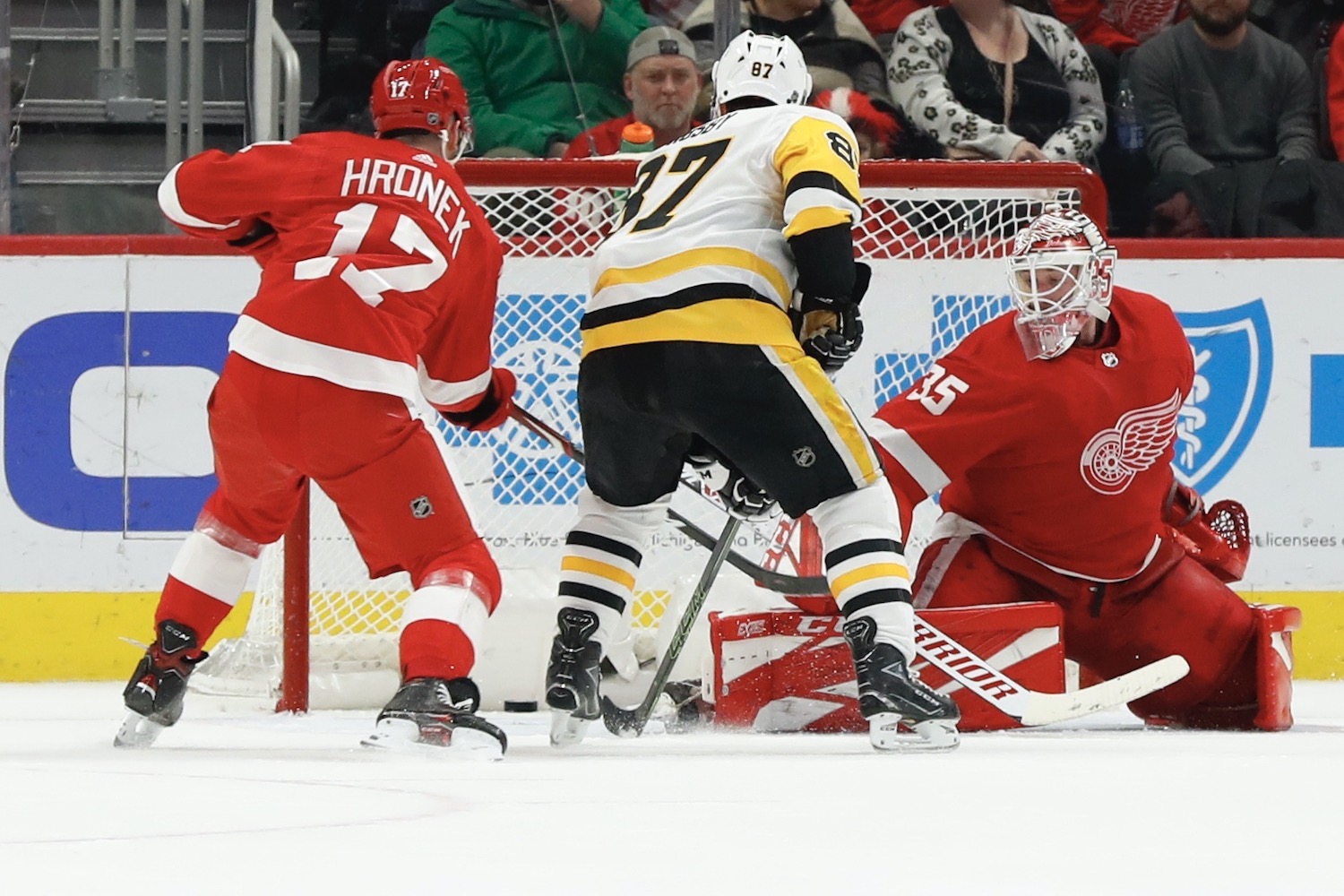 DETROIT -- The Red Wings entered Friday's game as the NHL's worst team by a 13-point margin, with the worst goal differential by a difference of 39 goals.

So through 40 minutes of the Red Wings' matchup with the Penguins on Friday, it was a bit surprising to see the home team holding onto a tight 1-0 lead, with Jimmy Howard, who was winless in 12 straight starts since Oct. 29, clinging onto a shutout.

After a slow start, a couple of the Penguins' usual suspects stepped up late to pull out a 2-1 overtime win.

The Penguins came out for the third period with more energy and jump in their step, and on an early power play chance after Darren Helm was called for tripping Sidney Crosby, Bryan Rust tied the game at 3:36 in the final frame of regulation:

The goal was Rust's 20th career goal, a new career-high in just his 34th game of the season.

"It's pretty cool," Rust smiled when talking about the 20-goal mark. "It's one of those milestone things that once you get closer and closer, you look at as somewhere where you want to be. I think over the past few years I've gotten close. Whether it be injuries or not being able to put a few more in the net, I haven't been able to do it. It's pretty special to be able to do it, and especially to do it here."

"Here" is Detroit, 45 minutes down I-75 from Rust's hometown of Pontiac, Mich.

"It's not easy to score 20 goals in this league," Mike Sullivan said of Rust's milestone. "Rusty's played extremely well for us. He's playing in all situations, penalty kill, on the top power play, and he's done a great job. I think his confidence is at an all-time high, as it should be. He's playing extremely well."

"I thought at the end of the second period we generated some good chances, I think we just kind of built off of that," Crosby said of the Penguins' late turnaround. "We just had to continue to push and create opportunities and trust that we'd get one. Rusty got a big one to get us going. ... We did a pretty good job in the third of sticking with it and competing. They played hard, there wasn't a lot of room."

At 1:12 of overtime, Luke Glendening interfered with Jared McCann, leading to a 4-on-3 power play for the Penguins. At the 21-second mark of the power play, Rust sent a cross-ice pass to Evgeni Malkin, who took a shot at the net. Crosby redirected the puck into the net for the win:

The overtime winner extended Crosby's goal streak to three, one in each of the games since he returned from core muscle surgery.

"It's very impressive," Sullivan said of Crosby's continued production. "It's hard for guys come back off injuries. Usually there's an adjustment process, getting used to the timing and intensity of games. Sid missed an extended amount of time. But once again, if you're asking if it surprises me, I say 'No,' because I watch his work ethic every day, and how he prepares himself to get ready to get back into the lineup. ... I just think the fact that he's been able to have the impact that he's had in the first few games is amazing."