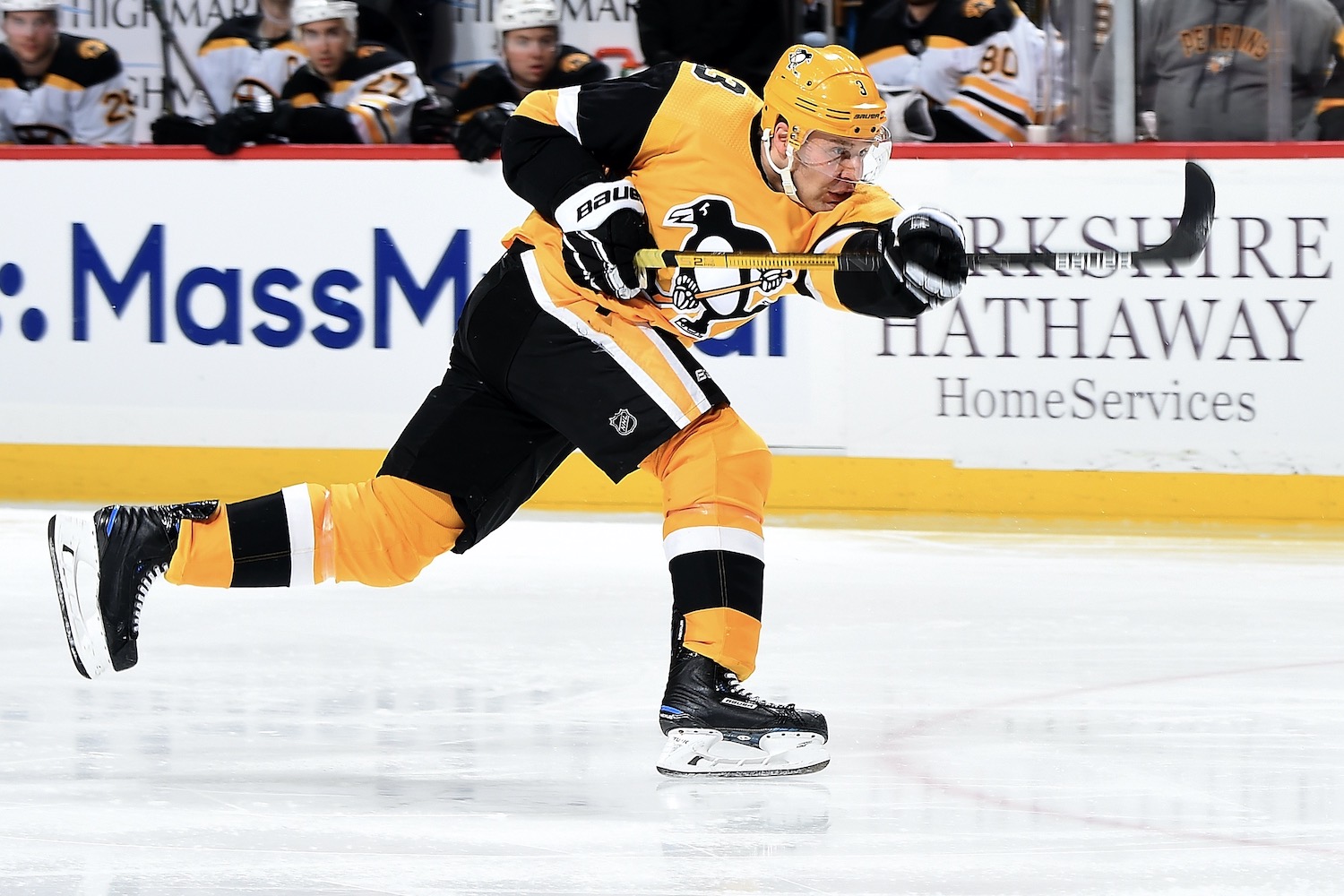 A month ago, Jack Johnson was getting some good-natured grief from good buddy Drew Doughty. Something about barely having any goals over the past, oh, decade or so.

"What happened to you, man?" Doughty jabbed, per Johnson's recollection. "You used to score!"

He actually did. When both were kids with the Kings, both were seen as that sort of defenseman, though only Doughty, of course, would blossom with the offense.

"Ever since I got here, I just focus on the defense, " he'd say to Doughty. "And I'm good with that."

I'm retelling this tale, primarily, for the obvious reason: Johnson blasted a huge short-handed goal in the Penguins' 4-3 rally over the Bruins on this Sunday afternoon at PPG Paints Arena:

Ripped it right by the big blocker of Jaroslav Halak. Brought a 3-3 tie after spotting Boston the first three. Might as well have brought the roof down, too.

Can't be a better feeling in this beautiful sport. Just can't.

Not that Johnson would own up to that.

That's what he should've told Doughty.

Because this guy, though grossly overpaid by Jim Rutherford and still prone to a gaffe or botched assignment, has raised his overall performance year over year to 10 points, a plus-9 rating and a 48.52 Corsi For percentage at five-on-five. All are modest upgrades over 2018-19. In addition, he's raised his dedication to defending beyond any doubt. And for emphasis, I'm referring to the dedication above all.

It even involved the goal up there, believe it or not.

Once the cameras and microphones cleared out, I asked Johnson why he chose the short side on Halak, if maybe he'd spotted a hole. And his answer was ... let's just say there's not a lot I hear in hockey that surprises me, and this one stunned me.

"Honestly, what's going through my head there is that, if I don't beat him short side, at least I'll put it on net or miss to the left, in which case it just kind of ricochets behind the net," he explained. "But if I miss far side ..."

Then he commits the Alexei Kovalev thing. I've always called it that when anyone rips a shot that wraps all the way around the boards and pings back the other way. Kovalev used to drive everyone nuts with that.

"If that puck goes off the far boards and bounces back past our guys," Johnson continued, "Boston had three guys trapped behind me, so we're sticking Tanger with a three-on-one. I can't risk that."

So he scores a huge goal, first and foremost, by taking care of the back end and his partner, Kris Letang.

That's what he should've told Doughty.

Let's take a longer look to appreciate it further:

What stands out in that clip is what Johnson referenced about three Boston guys being trapped. All three are below the Pittsburgh goal line, with two of them tangled up. That's what gives Johnson the green light to take off.

From there, Brandon Tanev skates tall into the Boston zone, pulls up and hits Johnson as the trailer. Meanwhile, Teddy Blueger drives to the net and, in the process, clips the stick of the Bruins' Patrice Bergeron, a brilliant defensive forward but still out of his element as a defenseman.

"Those guys did all the work," Johnson would say of Tanev and Blueger.

Want to know who didn't do any work?

Oh, you betcha. That's No. 63 in your program, No. 1 on the Penguins' personal peeve list, Brad Marchand, and he's barely breaking a bead of sweat in getting back. He actually had a step on Johnson at the very outset of the sequence, but Johnson just cared a whole lot more.