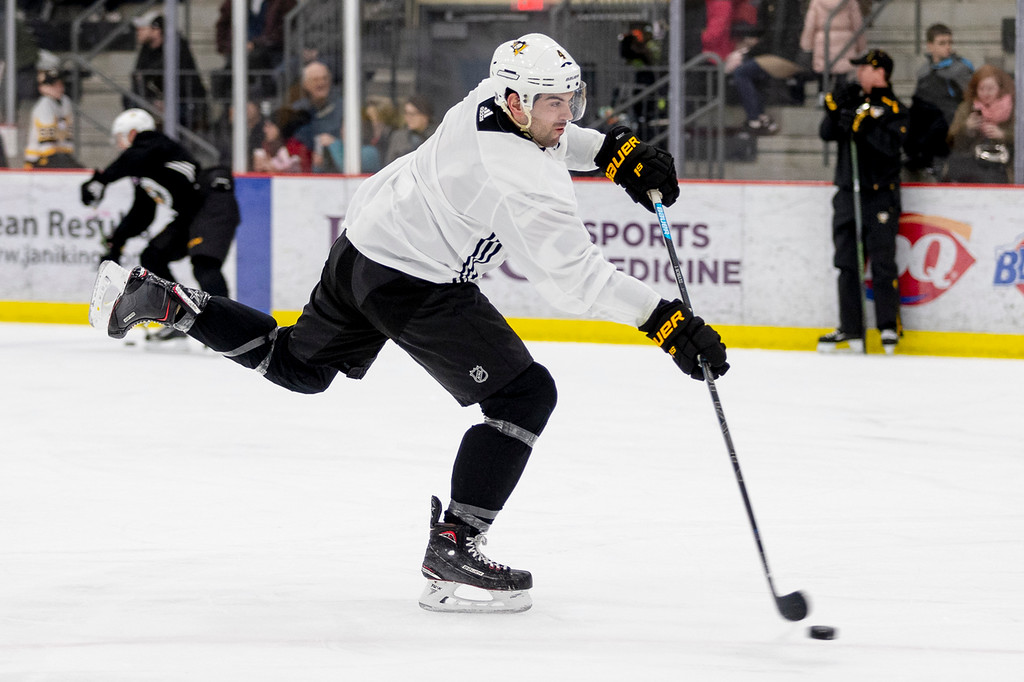 CRANBERRY, Pa. -- Justin Schultz is pretty certain he'll be returning to the Penguins' lineup for a game against Philadelphia.

He just isn't sure which one.

Could be the one that will be played Tuesday at 7:38 p.m. at Wells Fargo Center, on the far side of the Commonwealth.

Or maybe it will be the one on Jan. 31 at PPG Paints Arena.

Schultz, who joined his teammates in practice for a full workout Monday for the first time since being injured during a 4-1 victory in Calgary Dec. 17, is sure he'll be back in one of those games, mostly because -- thanks to the NHL's all-star break and the Penguins' subsequent "bye week" -- there aren't any between them.

"Obviously, I'm hoping for the sooner one (of the two Flyers games)," he said. "But you have to make sure you're 100 percent.

"I was full-out today, but we'll see. Obviously, I want to play, but it's about being smart, too."

While Schultz' status for the game Tuesday remains uncertain, the Penguins know they will be without top-six forward Dominik Kahun, who Mike Sullivan said was diagnosed with a concussion after leaving the Penguins' 4-3 victory against Boston Sunday in the second period.

They do, however, expect to have forward Dominik Simon, who left the Bruins game with an unspecified lower-body injury. Simon practiced with no apparent problem Monday and pronounced himself likely to play, an assessment Sullivan echoed.

"I feel way better," Simon said. "It's going to depend on how it feels tomorrow, too, but it feels good right now, so I'm hoping to play tomorrow."

Schultz, who has missed the past 15 games and will be an unrestricted free agent this summer, has two goals and six assists in 27 games. Those are modest numbers, but his offensive talents are invaluable, especially since he's a right-handed shot.

"He's a real good player," Sullivan said. "He's played a lot of good minutes for us. When we do get him back, it's going to be a big boost."

A determination on whether to bring Schultz back Tuesday will hinge out on what comes out of a discussion between him, Sullivan and members of the medical staff.

If there is any indication of a problem, Schultz presumably will be held out until after the upcoming break, although he seems cautiously optimistic that he'll be able to get clearance for the game Tuesday.

"(The recovery) was a little slower than I wanted at the start, but once I got on the ice every day, it felt better," Schultz said. "And it's feeling pretty good right now."

With Schultz and Brian Dumoulin sidelined, Chad Ruhwedel and Jusso Riikola have been pressed into steady work on defense and have responded well. Which is pretty much the case with forwards who have been compelled to take on bigger-than-expected roles because of injuries, too.

The Penguins already have lost 204 man-games because of injuries and illness, but that hasn't prevented them from climbing to fourth place in the overall standings, just four points behind first-place Washington.

"Obviously, we look forward to the time when we have a healthy lineup," Sullivan said. "But in the meantime, these guys who are playing every night have done a great job for us."

Share
Tweet
Email
Guarantees key to getting Dupree deal
Hall of Fame forecast: Who gets in tonight?