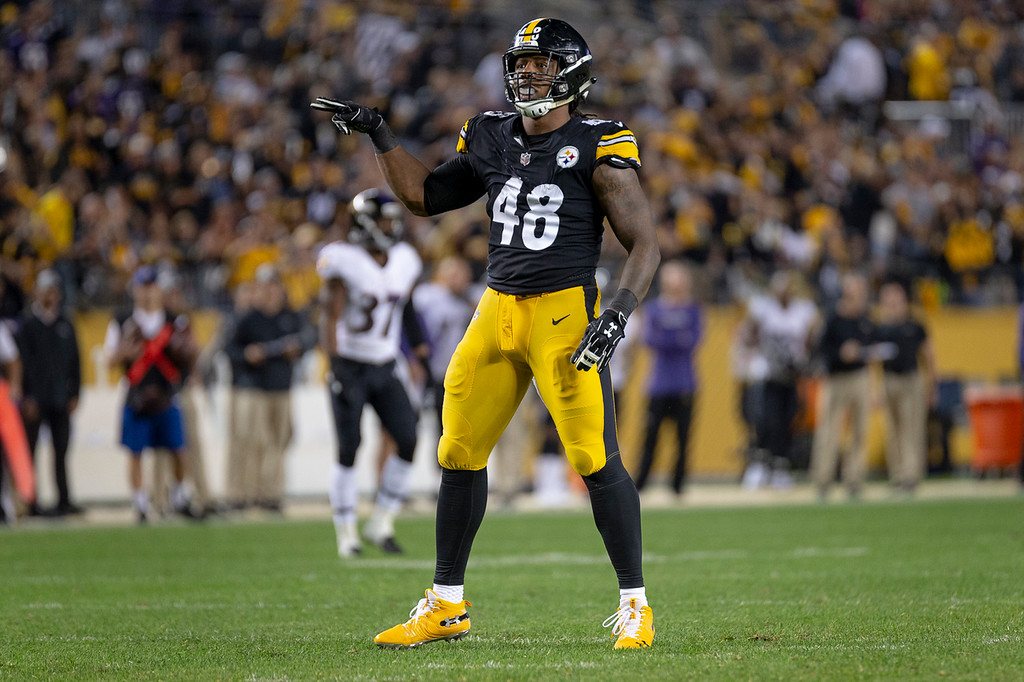 Looking back over the past three decades of Steelers football, when the team has had two great outside edge rushers, the defense has been stellar.

Since 1992, the Steelers have finished in the top five in both points and yards allowed 10 times. Nine of those dual rankings occurred between 1994 and 2011.

The 10th? That happened in 2019. And that is why the Steelers aren't so keen on the idea of allowing outside linebacker Bud Dupree to leave in free agency.

The common theme among all of the team's stellar defensive efforts over the years has been a consistent presence of dual pass rushing threats from the outside linebacker position.

Kevin Greene and Greg Lloyd led the Steelers to a second-place finish in points and yards allowed in 1994 by combining for 25 sacks.

The only outlier among those highly rated defenses was in 2007, when the Steelers finished second in points allowed and first in yards when Harrison and Haggans combined for just 12.5 sacks. But Woodley added four sacks in a reserve role as a rookie that season, giving the team sufficient pass rush from the edge.

All told, when the Steelers have had a dominant defense, they've gotten an average of 21.3 sacks out of their primary edge rushers.

"I wouldn’t disagree with that," Rooney said.

Thus far, much of the speculation has centered on the Steelers using the franchise or transition tag on Dupree. The franchise tag would likely cost the salary cap-strapped Steelers more than $16 million.

As pointed out here recently, the team can create the cap space necessary to make that move. But what might a long-term deal look like for Dupree, who turns 27 on Feb. 12?

According to Spotrac.com a market value contract for Dupree would be five years at $83 million, an average of $16.6 million per year.

That might sound outrageous to some, but it's the going rate for edge rushers. The key will be in the guarantees.

The Steelers have balked in previous years at handing out big guarantees, but that changed last offseason with the deals given to Ben Roethlisberger and Joe Haden.

Dupree made $9.2 million in 2019 after the Steelers picked up the fifth-year option on his rookie contract.

Much will depend on whether the NFL and NFLPA agree on a new CBA, something the current leadership on both sides would like to have done before free agency begins in March.

That's important because of what has been dubbed the "30 percent rule." That rule, written into the current CBA, says that "no player contract extending beyond the Final League Year" -- in this case, 2020 -- "may provide for an annual increase in salary ... of more than 30 percent of the salary provided for in the Final League Year, per year, either in the season after the Final League Year or in any subsequent season covered by the Player Contract."

So the Steelers, who have traditionally shunned big signing bonuses in the past, would have to build in a big signing bonus for Dupree to keep his base salaries from jumping or falling more than 30 percent in future seasons.

In previous seasons, the Steelers would sign players to extensions that included a low base salary in the first season, since the player was already getting a signing bonus to go along with the extension. And the base salary would go up considerably after that.

But under the "30 percent rule," that won't be permitted. So, if the Steelers want to get Dupree signed to a long-term deal before and if the new CBA is ratified, they would have to get creative.

For a blueprint, they could look at how the 49ers did Patrick Willis' contract in 2010.

The 49ers stayed within that by working a number of creative roster bonuses into the contract that allowed him to sign a five-year, $50-million contract extension with more than half -- $29 million -- in guarantees. And that was in a time when the salary cap was around $120 million.

It might not be the way the Steelers have done business in the past. But they've shown the ability to adjust.

Their largest payout in guaranteed money went to Roethlisberger just last year in a deal that fits into the CBA rules.

Soon after, Haden was given a two-year contract extension worth $22.4 million in which half of that amount came in the form of bonus money, with $16.8 million of that deal guaranteed.

That means a new contract for Dupree, if in that $83-million range, would likely have to include some $40 million or more in guarantees.

Argue all you want about whether he's worth that much money, but that's the going rate. And given that it took the Steelers the better part of a decade to get their defense back to finishing in the top five in both points and yards allowed, it's a price they sound mighty willing to pay.

Remember, Roethlisberger's contract comes off the books in 2022 -- assuming they don't sign him to another extension -- and their cap opens up considerably in 2021, anyway, with the team estimated to have $90 million in cap space for that season with a number of expiring deals on the books.

That will create some new issues, but the cap could increase substantially in 2021 if the players approve a 17-game schedule and/or an increase in teams that make the postseason.