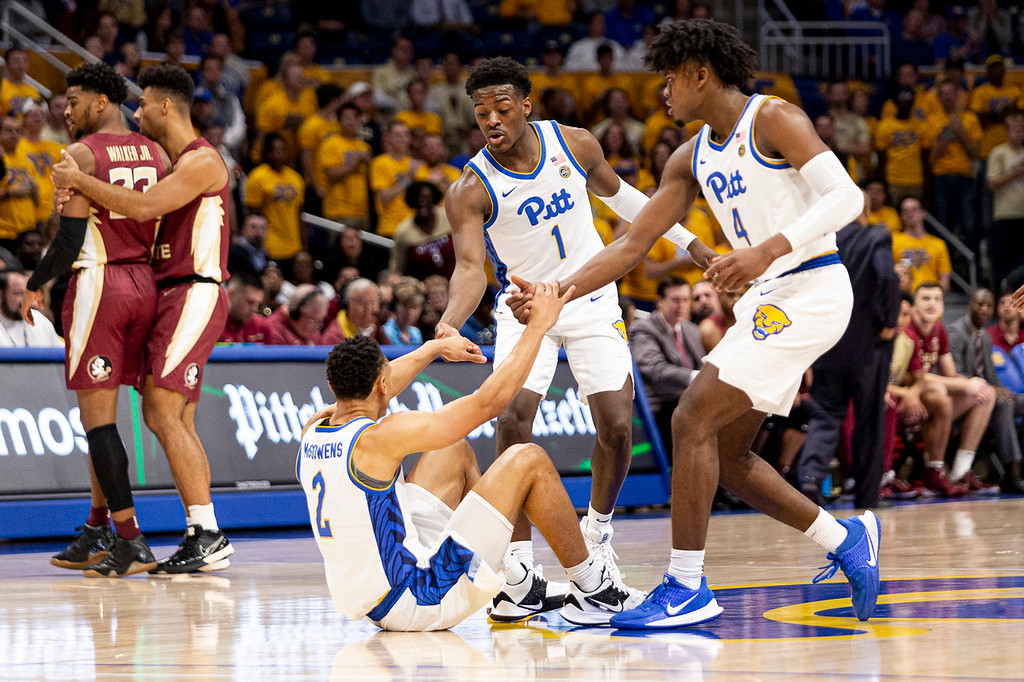 Numbers can be misleading — and that's certainly the case for Pitt sophomores Xavier Johnson and Trey McGowens.

Last season, Johnson and McGowens emerged out of high school and led the way for the Panthers in Jeff Capel's first year as head coach, finishing first (15.5 points per game) and third (11.6 points per game) on the team in scoring, respectively. Senior Jared Wilson-Frame was sandwiched between them at 12.7 points per game.

Their impact didn't stop there, though. Johnson led the team — by far — with 4.5 assists per game, outpacing Sidy Ndir's second-place clip of 1.9 per contest. McGowens (1.9) and Johnson (1.3) also went one-two in steals per game.

All this created some serious expectations for the duo as they entered their sophomore campaigns. And ... the numbers haven't panned out.

Compared to their first 18 games last season, McGowens and Johnson are being out-paced by their younger selves.

It's not what you want to see from them — until you keep digging.

Let's start with this: McGowens and Johnson were freshmen last season, and teams had little tape to work with. Nobody knew what to expect from them. Nobody knew their tendencies. Now, that's all well known in the ACC and beyond.

“Specifically when you defend Pitt, it’s been our opinion you have to try to keep McGowens and Xavier Johnson from getting in the lane,” Louisville head coach Chris Mack was saying after his Cardinals wiped out the Panthers in overtime at Petersen Events Center.

Mack's not alone in that thinking, either. It's evident watching the games that the Panthers offense runs through those two at all times. It's no secret.

"Those are two guys that can create offense for us off the bounce," Capel said Monday during a phone conference. "We really don't have anyone else that can do that."

And despite the fact that the offense completely hinges on those two ...

Both McGowens and Johnson have boosted their assists per game this year while maintaining the same amount of combined turnovers. This year, both have a positive assists-to-turnovers ratio, something McGowens couldn't claim last year.

"For Trey, I think the game has slowed down a little bit for him," Capel said when I asked him what signs of growth he's seen from the duo in ACC play. "At this point, I think he has more assists now than he did all of last year. And right now, at the moment, in the present, he has more assists than turnovers. I'm not sure he was ever at that point last year. So I just think they're able to see things a little bit better. I think they're able to understand things a little bit better."

That's crucial as the team continues to claw its way through ACC play. So while it's easy to lock onto the points and the shooting splits, the bigger story has to include assists and turnovers, too. Because this year, it's not all about McGowens and Johnson.

Justin Champagnie (11.1) and Ryan Murphy (10.7) are averaging double digits. Last season, Au'Diese Toney was fourth in scoring, putting up 7.5 per contest, and he's maintained that vital role as an all-around stat-sheet stuffer, putting up 6.8 points, 4.9 rebounds and a steal per game in 2019-20.

"I don't think it's just them [Johnson and McGowens]," Capel said. "I think it's everyone. Obviously those two guys have the ball in their hands a lot for us. But it's all the way around. Guys have to trust them to be able to create for everyone else ... I think we've gotten better at that. It's still not where it needs to be, but it's something that we're still working on and trying to grow every day."

And at this same point last season, Pitt was 12-6 and 2-3 in the ACC. This year, they're 12-6 and 3-4 in conference play. Much like the stats with McGowens and Johnson, it's not a massive bump — but it's an improvement nonetheless. The key now, both as a team and as individuals, is finding some sort of consistency within that growth.

"We won a big game and now we need to put back-to-back [games together]," Capel said. "What we've done this year, especially in conference, is that you win a game and the next game we're not as good. And that's been, unfortunately, the thing we've been consistent at so far this year.

Pitt went 3-15 in ACC play last year, so jumping out to that 3-4 start this season is huge. It gives them the chance to not just improve but to shatter what they did last year. It'll start with Johnson and McGowens, of course, and Capel sees them as a reflection of the program as a whole: Improving, with no ceiling yet in sight.

"They still have a lot of room to grow," Capel said. "And we're excited to help them, to help teach them."

The process is slow and steady, and the stats don't currently jump off the page. The duo will still frustrate late in games (see the losses to Wake Forest and Louisville at home for particularly striking examples).

But that's how growth works at this level. They'll take their hits and they'll force up some bad shots. This year, though, they'll recognize it, and they'll immediately look to improve upon it.

“I made a dumb decision at the end of the game," Johnson was telling me of his shot selection in the Wake Forest loss. "I know I did. That’s one thing that I gotta move on [from]. Because I got more games left.”

Then, there was McGowens acknowledging an unnecessary three-point attempt in real-time:

Now toss in the duo's improved assists-to-turnovers ratios and consider where this Panthers team sits in the ACC standings — right near the middle, with an immediate and realistic opportunity to climb. Add it all up, and there's undeniable growth with McGowens and Johnson in Year 2.

You just gotta squint a little more than expected to see it.