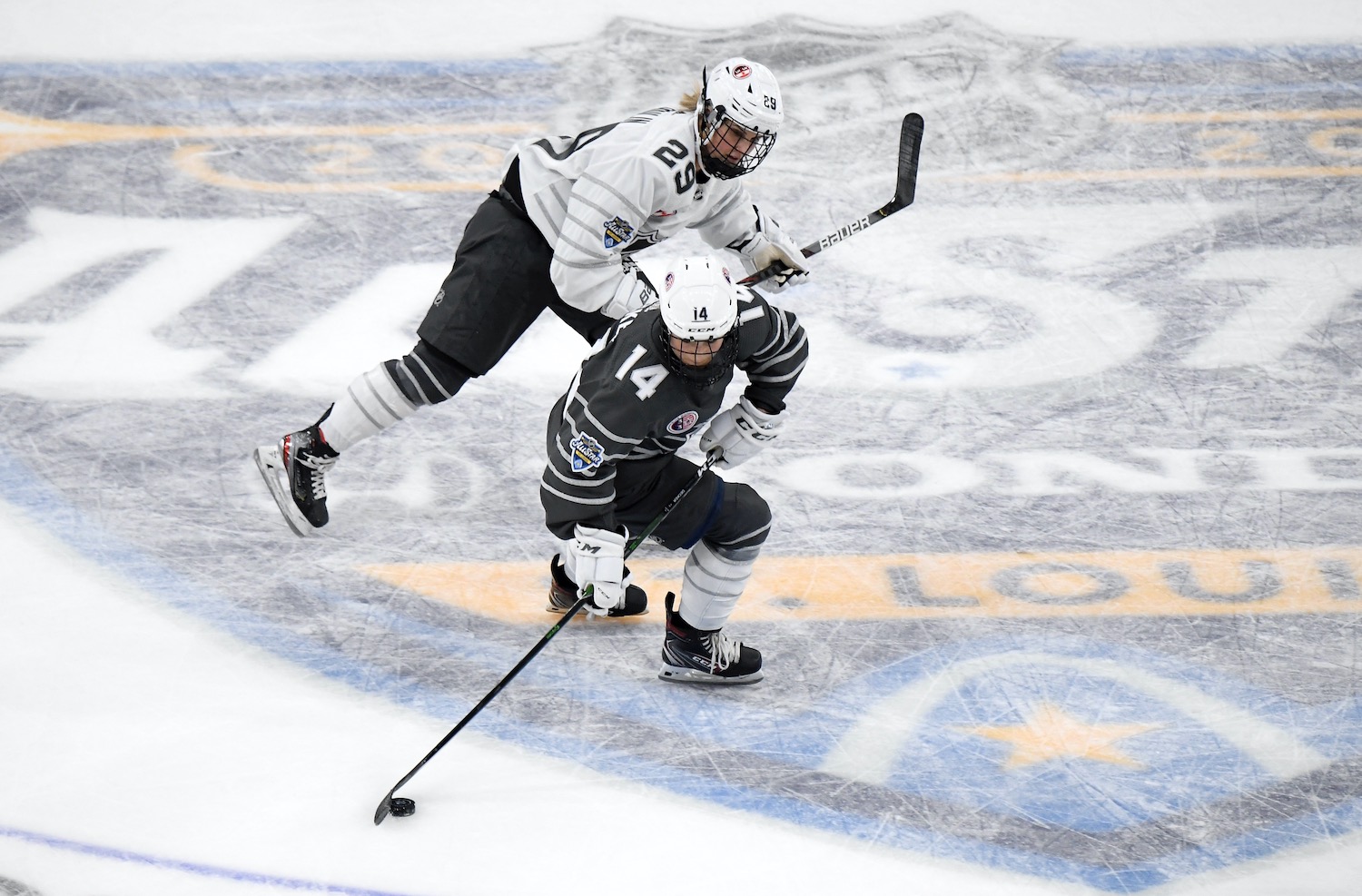 ST. LOUIS -- For the third consecutive year, the NHL incorporated some of the top players in the women's game into its All-Star weekend, and the women did not disappoint.

The NHL debuted the Elite Women's 3-on-3 game during Friday's skills competition, a 20-minute game between some of the top players from the U.S. and Canadian women's national teams.

The fast-paced, intense game ended in a 2-1 win for Canada on the scoreboard, but the event was a win for all of women's hockey.

"It was just a phenomenal 20 minutes," Kendall Coyne Schofield said after the game. "It was so much fun to be a part of. ... It's something that you dream about, the day that there's routinely that many people watching women's hockey, and there are sold-out buildings. To have that here tonight for three-on-three alongside the NHL's best is just incredible."

"We made history here," Hilary Knight said. "To have (Hall of Fame players) Cammi Granato and Jayna Hefford involved, the NHL's support, we're doing big things. The time will come when women's hockey is going to be on the same platform one day."

Canada forward Rebecca Johnston opened the scoring with a breakaway goal less than a minute into the game:

Two minutes later, Hilary Knight answered with a breakaway goal while being chased down by Canadian captain Marie-Philip Poulin to bring the U.S. women back within one goal:

Canadian goalie Ann-Renee Desbiens was easily the No. 1 star of the game with 15 saves:

Desbiens made a huge save on an Amanda Kessel shot in the final second to secure the 2-1 win for Canada:

The goaltending was outstanding on both sides, with U.S. goaltender Alex Cavallini stepping up with 14 saves to keep the game close:

"Both goaltenders, how phenomenal were they?" Coyne Schofield raved. "Oh my goodness."

"The goalies are amazing," Canada's Natalie Spooner told me. "They always are. If you look at the women's game, the goalies are stellar. That's why the games are always so close between the Canada and the U.S., they both stand on their heads."

"They were amazing," Poulin said. "They shut the door many times, many places. They stepped up for both teams."

I thought the three-on-three format was great for showcasing the exceptional speed and skill of the women's game. Watching how well they handled it, you wouldn't have known that it's a new format for these women. Up until this year, overtime in women's international play was four-on-four. We've seen women play three-on-three in the women's U18 World Junior Championship this season, but the women on the senior national teams haven't had the opportunity yet and had to adjust to the format in this game.

"It's definitely really different," said Spooner. "It's fun out there. There's so much space in that game, breakaways, it was fast back-and-forth. We were feeling it after the first few minutes even. We were like, 'Okay, this is going!'"

"There was a lot of ice out there," Coyne Schofield said. "It took a little bit to get the legs going and get used to the rhythm of three-on-three. We're definitely used to four-on-four, I think you could see that at the end when we pulled our goalie and moved the puck a little bit more."

Yes, this was an exhibition game, and no, the players weren't wearing their national team jerseys. But this was still a classic tight rivalry game between U.S. and Canada. Just as with the joint women's camp in Cranberry, it's never "just exhibition" when these two teams match up.

"We face off against each other in a week and a half in Vancouver, Victoria, and Anaheim," Canada's Sarah Nurse told me, referring to the upcoming Rivalry Series. "This was setting the stage, setting the table and setting the tone for that series."

"As soon as the puck drops, it clicks back to that, 'Wow, we're playing against the U.S.,'" Spooner said. "You never want to lose to them. You bring it as soon as you step on the ice with them."

The two teams actually shared a locker room before the game, a bit of a weird situation for the two rivals.

"Oh, that was a little strange," Nurse laughed. "After the game we wanted to celebrate a little bit, we were looking across the room like, 'Sorry, guys!'"

"It was tough," Knight laughed.

When the games are over though, the women on both sides are united for the same cause.

"At the end of the day, we're all trying to do the same things and fight for the same things," Knight said. "To be able to make history tonight and have a lot of fun doing it is a dream come true."

"For us it wasn't about the Canada-U.S. rivalry, it was about women's hockey and we want the growth," Poulin said. "To show a good product is huge for us."

The women's players were grateful to the NHL for providing them with this platform to showcase their talents this weekend. It's not always easy to be able to see these women from the Professional Women's Hockey Players Association during the year, and this stage allowed the women to reach new fans who may not have been able to see the women play otherwise.

"For the NHL to allow us to have this platform to play the game we know how we can play in front of so many people, it really shows the strides that this game is making," Coyne Schofield said. "We're making it together, collectively. That's really special."

"I think we opened a lot of eyes tonight," Poulin said. "We just have to keep going. We have to be patient, but we have to use the visibility that happened this weekend. Not only for the 20 players that were here, but for many that we represented that should be here."

These All-Star Games are always geared more toward children, and to give young girls and boys the opportunity to see women playing hockey at a high level at an event like this was incredibly important. Kris Letang made sure to get a picture of his son Alex with Poulin after the game:

Kris Letang asked Marie-Philip Poulin to take a photo with his son and it was adorable.#NHLAllStar pic.twitter.com/2267NCgIq4

"You see around, the little girls and little boys, they wanted to cheer for us," Poulin said. "It was really special."

"For that young girl who is looking at the TV, she can see a women's hockey player and aspire to be that," Knight said. "That's what we're going to continue to do is raise the visibility and increase the programming. If she can see it, she'll be it."

In his "State of the NHL" address earlier in the day, Gary Bettman wouldn't commit to an answer when asked if we can expect to see women involved in the All-Star Game in the coming years. But especially after this year's showing, it's hard to imagine that this won't become a regular thing in the future.

"I would love to be invited back," said Spooner. "We don't really know what next year is going to look like, but we're thankful and working toward that."

"I think every time we've come, we've proven ourselves," Coyne Schofield said. "We've put on a good show. It's a tremendous honor to be here."

"When we've showed up, we've killed it," Knight added. "With what Kendall did last year, it was phenomenal for our sport and raised the visibility more so. There's a lot of people who say the women aren't fast enough. But when you add a metric like that, well, we're pretty fast."

Beyond All-Star Games, it's not clear if the NHL will ever step up and be the answer for creating a viable, sustainable professional women's league. Some women are hoping that is the case, though.

"We think the NHL does have the infrastructure and the buildings and the fanbase that we could have a model like the WNBA," Spooner said. "I think that's something we would love to model ourselves after. They had to start somewhere, and look at where (the WNBA) is now, signing that new CBA. So many amazing things happening in that league, I think that's our hope down the road."

Knight was asked if she thought a partnership with the NHL is on the horizon.

"Time will tell," she said. "The NHL has always been a strong supporter of women's hockey. I think events today demonstrate that support. It's only a small piece and a small step forward, but we continue to make those steps together."