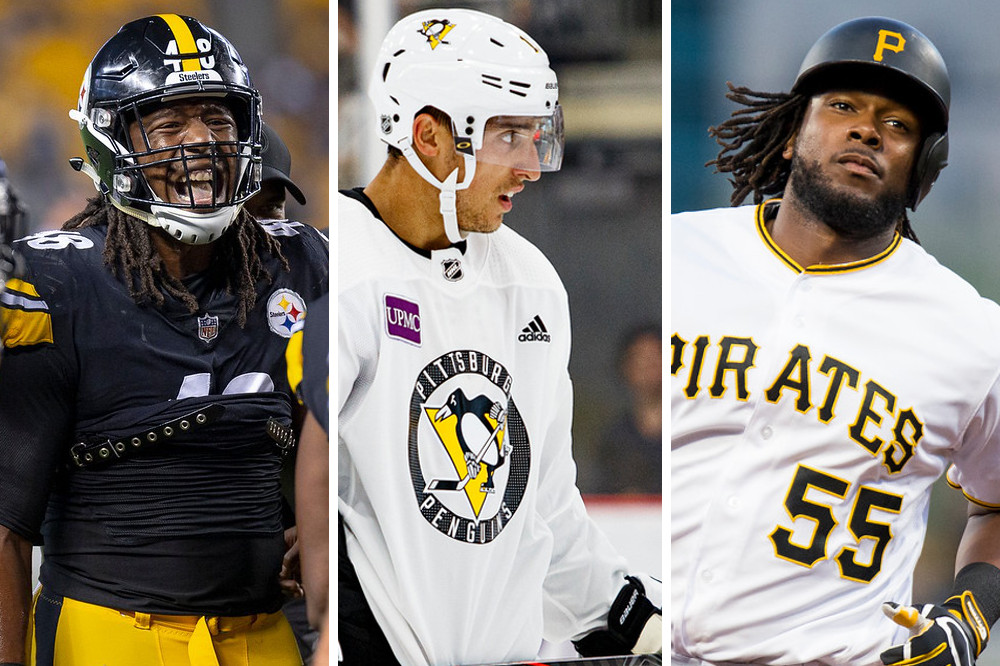 MIAMI -- If there's one thing that stands out about this year's Super Bowl, it's that the two teams involved, the Chiefs and 49ers, were involved in the edge rusher musical chairs that took place last offseason.

Clark and Ford both got contract extensions from their new teams, who ironically meet in Sunday's Super Bowl, while Clowney will now be a free agent after the Seahawks agreed not to place the franchise tag on him again prior to making the deal with the Texans to acquire him.

"No, that wasn't the conversation," Clark told me this week when I asked him if he knew he would be traded once the Seahawks used the tag on him.

"I understand the game. I played my four years. I did my time. Things could change. I understood once I got that franchise tag, that was a possibility. I knew they wanted to maximize what they could get in value. If you wait, if I played on the franchise tag, I'd be up again the next year."

Could the Steelers look to do the same thing this year with pending free agent edge rusher Bud Dupree?

The Steelers are certainly looking at placing the franchise tag on Dupree, who had a career-high 11.5 sacks in 2019. And they don't have a first-round draft pick after trading that to the Dolphins in the deal to acquire safety Minkah Fitzpatrick.

But the Steelers also have expressed an interest in having Dupree back in 2020, with both Mike Tomlin and team president Art Rooney II calling him a priority.

That could be because the Steelers don't have a player on the roster capable of replacing Dupree. But, acquiring a first-round pick for the edge rusher could help change that.

So, it seems unlikely the Steelers would get a first-round pick for Dupree, their top pick in the 2015 draft. But they could, perhaps, get a second-round selection. And it could come this year instead of waiting for a possible compensatory selection in 2022 if he leaves in free agency after the 2020 season.

Of course, the Steelers also don't have a replacement ready to move into the starting lineup for Dupree across from T.J. Watt, which might be the fly in the ointment, though they could certainly draft one and hope he's ready to play.

The possibility of a tag and trade would make things interesting. It certainly did for Clark.

"It was wild, the offseason with the free-agent stuff," Clark told me.

• Matt Moore is a backup quarterback for the Chiefs. But he'll always be remembered in Pittsburgh for being on the receiving end of one of the biggest hits in recent Steelers history. That came when Moore was playing for the Dolphins in a Jan. 8, 2017 playoff game at Heinz Field. Moore rolled to his right to attempt a pass in the second half of that game, a 30-12 win by the Steelers, and Dupree closed on him quickly, hitting him so hard even Steelers fans were concerned for Moore's well being. I asked Moore this week what he remembers from that game. "Obviously the big hit. That’s the first thing. We got down quick. I think Antonio Brown made two big plays. Le’Veon (Bell) was going off early. So as an offense, we were chasing points early," Moore said. "I remember being as cold as cold could be and then obviously the hit. I had been in a playoff game before, but I hadn’t played, so it was my first experience playing in a playoff game. They’re all meaningful, but those have more meaning." Moore quickly returned to the field after the big hit, causing some to question whether he had been rushed back. Moore said that was not the case. "It looked worse, it sounded worse (than it was)," Moore said. "People made it into more than it was because it ended up going everywhere. I got hit hard, no doubt about it. But I passed every test with flying colors. I’m a father of three. I wouldn’t have gone back in if I wasn’t OK. It looked awful. And he got me. He did. I promise you that. I was ready to go back in." -- Lolley

• Brandon Tanev has lived up to most expectations during his first season with the Penguins, and exceeded the rest. It's no surprise then, that any skepticism that accompanied his signing as an unrestricted free agent last July has melted away. Still, it is premature to fully assess the merits of the six-year, $21 million deal that got him here. The issue always has been the length of the contract, not simply adding Tanev to the roster. Whether concerns about how much he'll be capable of contributing during the final few years of the deal were well-founded won't be known until, well, the final few years of the deal. If Tanev is still performing in Years 5 and 6 the way he is now, tying him up for six years will be one of Jim Rutherford's most shrewd moves as GM here -- and he's made a few. But if Tanev's high-energy style and playing bigger than he is begins to wear him down and limit his effectiveness after three or four years, the final seasons of his contract could become something of a salary-cap millstone around the neck of the franchise. -- Dave Molinari

• The most celebrated regular-season event in college hockey begins Monday, when Harvard faces Northeastern, and Boston University and Boston College collide in the opening round of the Beanpot tournament at TD Garden in Boston. Every school that's involved has a representative on the Penguins' payroll -- Mike Sullivan (BU), Brian Dumoulin (BC), Zach Aston-Reese (Northeastern) and John Marino (Harvard) -- and more than mere bragging rights figure to be at stake when they interact in coming days. "There, for sure, are going to be some bets going on," Aston-Reese said. The Beanpot will be televised nationally on NHL Network this year, which means the rest of the U.S. will get to witness something that has been wildly popular in New England for decades. "The Beanpot is definitely pretty big," Marino said. "Growing up, I would always go to the Beanpot. We would always talk about it. The big rivalry was always B.U.-B.C. Harvard and Northeastern have pretty good programs now, and I'd say it's really competitive between all four teams. It's definitely a big deal." Harvard won it when Marino was a freshman, and while Northeastern never claimed the top spot during Aston-Reese's time on campus, he likes to think that he and his classmates helped to lay the foundation of a program that has finished first in each of the past two Beanpots. "Unfortunately, I didn't get to win one, but after we left ...  I hope the mark we left on the school, that's the reason they won a couple after we left," Aston-Reese said. "It's a pretty special tournament. To be able to play in it is pretty incredible." -- Molinari

• With the Feb. 24 NHL trade deadline coming into view, Rutherford can expect to field some trade proposals that would involve parting with draft choices. (The Penguins already have traded away their second- and seventh-rounders in this year's draft.) But because draft choices often are the currency of choice for teams that are sellers at the deadline, Rutherford realizes that giving them up for short-term gains often is the cost of doing business. He said his amateur scouts -- the guys who spend the winter evaluating players worthy of being selected -- understand that, too, even though they don't necessarily like that it must be done sometimes. "Over the years, I make it a little more difficult for the amateur staff because I trade draft picks and they don't get as many shots at (selecting players) as some of the other teams," Rutherford said. "But they understand the reasons why we do it." -- Molinari

• Josh Bell has been working on throwing sidearm this season. His short arm stroke was a product of him trying to learn first base, but he has been working on changing his arm slot this winter to improve his accuracy. "Now, as I’ve gotten older, I’m starting to understand when my arm needs to be up and why I need to stride a little bit longer toward the target that I’m throwing at," he said. -- Alex Stumpf

• That $43-million payroll figure for the Pirates that has been bouncing around the Internet is not correct. That is the figure for the guaranteed contracts, arbitration agreements and the $1.5 million going to the Diamondbacks in the Starling Marte trade. So unless the Pirates decide to field a 12 man roster this year, it will be about $50 million, assuming they fill the remaining spots with pre-arb players. -- Stumpf

• Cody Ponce had a gut feeling he was getting moved last year. "I had a conversation with my dad before the year started, and I said I feel like I'm gonna get traded this year. And wouldn't you know that I got traded," he said. The Brewers transitioned Ponce from a starter to a full-time reliever in 2019, and he felt that made him a better Rule 5 candidate. Rather than risk losing him in the draft, the Brewers traded him to the Pirates for Jordan Lyles at the July deadline, and the Pirates added him to the 40-man roster to protect him from the Rule 5 draft. Since he is on the roster, there is a very good chance he will make his MLB debut sometime this season. -- Stumpf

• At a recent Pitt road game, I had the pleasure of speaking with an NBA scout for one of the league's most lauded franchises. The scout works along the East Coast, so of course, I had to ask him if he was keeping his eye on anybody in particular for Pitt. He said when he watches games, he doesn't go in with an "agenda," so to speak. He just observes, and if somebody impresses him, he'll make notes and be sure to track them. He told me Xavier Johnson and Trey McGowens were the two he heard the most about — but it was freshman Justin Champagnie who actually caught his eye. He was impressed by Champagnie's versatility and athleticism and was extremely interested as we discussed his impressive season as a whole. He even made notes to check in on Justin's twin brother Julian, who plays at St. John's. -- Hunter Homistek