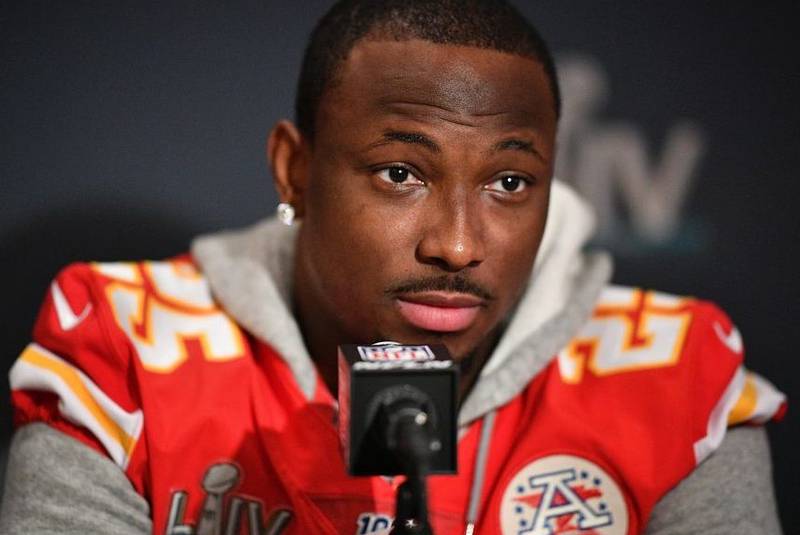 MIAMI -- LeSean McCoy has accomplished a lot on the football field.

He's led the league in rushing. He's been a first-team All-Pro. He's topped 11,000 rushing yards in his 11-year career, averaging 1,000 yards per season in a career that might end up one day in the Pro Football Hall of Fame.

One thing he had never done -- at least until three weeks ago -- was take part in a playoff win by his team.

McCoy didn't get to play a lot -- participating in just one offensive snap in the Chiefs' 51-31 win over the Texans while dealing with an illness that kept him out of the team's AFC Championship win over the Titans -- but after four previous losses in playoff games with the Eagles and then Bills, he'll take it.

"It’s been 11 years. I’ve played well enough, but I’d never won a playoff game before," the former Pitt star said. "It just shows how hard it really is. I’m just enjoying the moment and embracing it with open arms."

The moment McCoy is embracing is the Super Bowl, where the Chiefs will take on the 49ers Sunday here at Hard Rock Stadium.

McCoy's role with the Chiefs hasn't been one in which he is accustomed. He's been part of a backfield-by-committee. But the 31-year-old has enjoyed the ride after being released by the Bills in August in a cost-cutting move.

He was out of work for all of two days, signing a one-year, $4-million deal with the Chiefs. The move reunited McCoy with Andy Reid, who was head coach with the Eagles when Philadelphia selected McCoy with the 53rd pick in the 2009 draft.

"I had all the different teams calling me. I talked it him and it was a different-type conversation. It was more like a father to son, uncle to nephew," McCoy said. "We just talked and had a good time. It felt like home again. He told me to come back home again, I miss you. That’s what it was. For me to be back with him is really special."

McCoy started just nine games this season, but was used as a change-of-pace along with Damien Williams and Darrel Williams. His 465 yards on 101 carries were all career lows, though he did also catch 28 passes for 181 yards, scoring five combined touchdowns.

Still, there were games this season in which he was a healthy scratch -- largely because he doesn't play special teams -- but it hasn't diminished his enthusiasm about this season.

Retirement isn't in his plans.

"I said that I would only talk about when I can’t play as well. Then I’ll start talking about retiring," McCoy said. "I can still play. I still love the game. The winning brings a lot of joy to playing. When you lose, I’ve got three contracts. Why would you play? I was talking to (veteran defensive end Terrell) Suggs about it. When you’re having fun and you’re winning, you can play forever, or at least as long as your body allows."

McCoy, who said he's over the illness that sidelined him in the playoffs, will be the latest in a long line of former Pitt running backs to play in the Super Bowl, joining the likes of Tony Dorsett, Curtis Martin and Dion Lewis.

Getting a ring for a Super Bowl win would be a big deal among that group. Dorsett has one. So does Lewis. Martin, however, lost in his only Super Bowl appearance in his Hall of Fame career.

But more so than just winning a Super Bowl for himself, McCoy wants to win one for Reid, who has more wins than any coach in NFL history without winning a championship.

"That would mean the world me. We know how hard he works at this," McCoy said. "I remember when I was in Philly, it was the first time I saw a coach spend the night at the office. I thought that was crazy. He had a blow-up bed. He could sleep and then get up. He’s always been like a father figure for players.

"The last two weeks, there have been so many former players and even coaches from other teams who have been like, ‘Dang, we want Andy to get a ring. He deserves it. And we feel that."