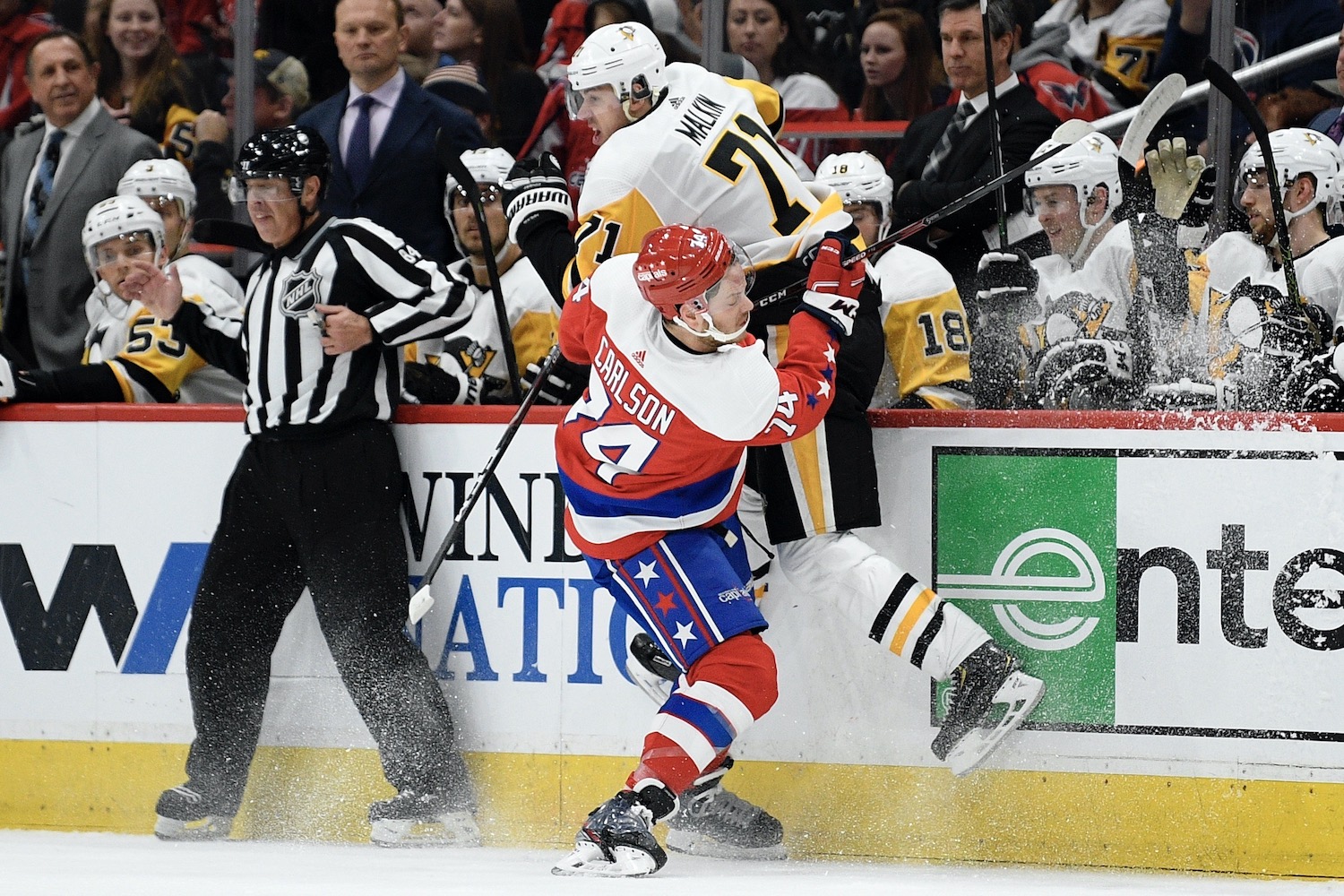 WASHINGTON -- It had been a long time since the Penguins and Capitals met. Before Sunday afternoon, the two teams hadn't faced off since March 12, 2019.

Almost a full year ago.

It didn't take very long for the rivalry to be renewed, though. This was a chippy, fast and physical game.

"This is the kind of game we're going to see from here on in with the intensity, emotion and playoff kind of mentality," Sidney Crosby said after the game. "We've got to earn every point we can get."

The Capitals outhit the Penguins in each period: 16-10 in the first, 9-3 in the second, and 22-11 in the third. The Capitals finished with 47 hits to the Penguins' 24. That effort was led by Tom Wilson, who recorded 13 hits, a new career high. Nine of those came in the third period alone. Some of Wilson's hits were massive, like this one on Brandon Tanev:

Anthony Angello played in his second NHL game and saw 5:49 of ice time, about a minute and a half more than he got in his debut last game. He recorded two hits in this game, and told me afterward that he felt more comfortable in this game -- partly because the nerves were gone, and partly because this is the kind of game he likes to be in.

"Playing this physical style of hockey, support, chipping it in, that's my style of hockey," Angello told me. "It's a great rivalry. I'm looking forward to the next time we play them."

Things got heated a few times. In the first period, Lars Eller hit Patric Hornqvist from behind (with a little help from a Dmitry Orlov shove), leading to a scrum:

In the second period, Crosby got hit with an interference penalty from the bench for grabbing T.J. Oshie's stick after Oshie was hit by Angello:

“I think it was Oshie,” Crosby explained. “I think he knew what he was doing with his stick coming by the bench there. I think you can probably watch it and see what happened.”

Guys were doing what they could to get any edge. There was one moment where Evgeny Kuznetsov tried to get over onto the Penguins bench to avoid a too many men call. He was denied entry and the Capitals still got hit with the call:

To try and avoid a too many men on the ice penalty, Evgeny Kuznetsov tried to hide in the Penguin bench. 😂😂😂 pic.twitter.com/FQneyyKPBW

"Smart play," Crosby laughed of the move. "Give him credit. If you can't get to your own, you might as well try that."

With the NHL waiting until February to schedule these two teams' first meeting of the season, they're going to see each other a lot in a short period of time. They'll play again in three weeks in Washington, then two weeks later in Pittsburgh, with the final regular season meeting coming after another two weeks.

After the way this game went, the intensity will likely only increase with each quick turnaround.

"There are some heated guys ready to respond next game," Wilson said.

• Sam Lafferty played in his first game since being recalled on Saturday and scored the Penguins' first goal of the game. He replaced Andrew Agozzino in the lineup and centered Alex Galchenyuk and Anthony Angello.

Lafferty's AHL stint allowed him to get some much-needed regular playing time, and he played well, scoring twice in his last three games. The whole experience was good for his confidence.

"I think being able to play more minutes, you just get back to the basics and figure some stuff out," he said. "It's definitely helpful, it's good. I feel a lot more confident now."

• Lafferty (Brown) and Angello (Cornell) both went to Ivy League schools, and played against each other often in college over three seasons. Last season in Wilkes-Barre/Scranton, the two were usually on a line together, and showed great chemistry. At the time, Angello described their chemistry almost like it was a sixth sense

“It’s almost kind of weird," Angello told me last season. "It’s like I know where he is on the ice at all times, and where he’s going to be and how he plays.”

The two were happy to be reunited here at the NHL level.

"He was my roommate last year, and he's my roommate this year on the road now," Angello told me of Lafferty on Sunday. "I spend a lot of time with him, I love playing with him."

"We played a lot together last year in Wilkes," Lafferty added. "We like to play the same way. We're on the same page out there, we know what to do. It's good, a familiar face."

• While the Capitals were killing a Jonas Siegenthaler penalty in the second period, goaltender Ilya Samsonov ripped off his mask and threw it, causing a stoppage, but no delay of game penalty. Sometimes goaltenders will do that if they feel a strap loose and want to fix it, but regardless of the reason he removed the helmet, it should have been a penalty. This is what the rule book says:

When the opposing team has control of the puck, play shall only be stopped if there is no immediate and impending scoring opportunity. This stoppage of play must be made by the Referee. When play is stopped because the goalkeeper has lost his helmet and/or face mask, the ensuing face-off shall take place at one of the defending team’s end zone face-off spots.

• The Capital One Center underwent about $55 million in renovations this summer, and the results are nice. The videoboard is four tiers, with the biggest one showing the game video, and the tier under it showing stats -- shots on goal, the faceoff numbers, hits, blocks, takeaways, power play stats, and timeouts remaining. The corners of the videoboard list all goals scored in the game, including who scored them, how many goals that player has this season, and who recorded the assists.

The corners of the arena also have dual-sided video screens. The side that faces the stands has the game feed, and the side that faces out shows the names and headshots of players currently on the ice for both teams, and their live time on ice numbers for that game.

Also, the press box has wheely chairs now. They used to be folding chairs. Nice.

• As is tradition, the local Penguins fans celebrated the win on the steps of the National Portrait Gallery across the street, and as is tradition, Capitals fans got rattled over it. Here are those videos.

• Jake Guentzel, Nick Bjugstad, and Brian Dumoulin are all on this trip. The team is heading straight to Tampa Bay, where they'll have a practice day, an off day, and another practice day before Thursday's game against the Lightning.

• The Capital One Arena visiting locker room has to be one of the smallest, if not the smallest in the league. There's also no separate room for their postgame workouts and stretching, so guys were just crammed into the hallway after, trying not to knock anyone out with their 40-pound dumbbells.

It's not surprising that earlier this season an ESPN survey of players around the league concluded that the Capital One Arena visiting room is the worst in the league. One player in that survey said the visiting showers are like "a prison shower."

• Evgeni Malkin's secondary assist on Hornqvist's goal gives him 45 assists in 45 career games against the Capitals. He has 19 goals in those games.

• Jared McCann's secondary assist on Dominik Simon's goal gives him seven career points (three goals, four assists) in nine games against the Capitals. His career average of .78 points per game against the Capitals is his highest against any one team.

• Johnson on Murray: “He was spectacular. Spectacular.”

• Mike Sullivan, on holding Alex Ovechkin scoreless: “He’s not easy to contain. It was a team effort.”

• Forward Lars Eller: "Two of their three (sic) goals are coming off of mistakes of ours, that we put ourself in a bad spot by not executing a pass or a a breakout. We paid for that."

• Forward Evgeny Kuznetsov: "I think overall we can learn a lot and take a lot of positives from this game."

• Forward Tom Wilson on what led to the Capitals' third-period resurgence: "We got fed up a little bit."