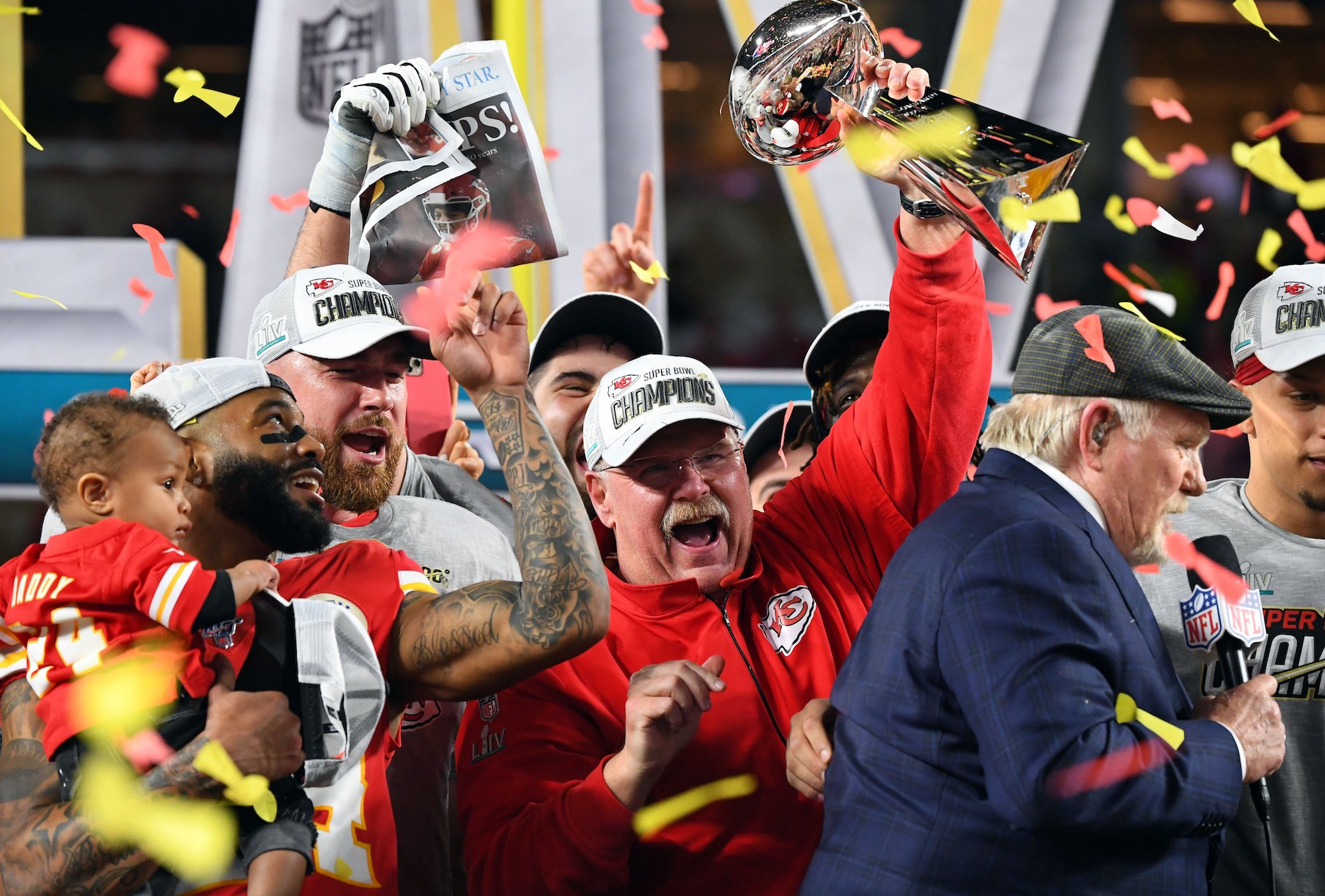 For their long-suffering fans, who had gone 50 years without a championship despite being one of the better teams in the NFL for long stretches over that period.

And for Andy Reid, their head coach, who prior to this game had the most wins in NFL history without winning a championship.

Both of those streaks are over. Super Bowl MVP Patrick Mahomes rallied the Chiefs from a 10-point deficit in the fourth quarter as Kansas City stunned the 49ers, 31-20, to win Super Bowl LIV.

"I'm happy for the Hunt family most of all to have this back in their hands. It's been too long," said Reid of the longtime owners of the Chiefs, who last won a Super Bowl in 1970. "I'm really happy. You win one, you want to go win another one."

The comeback continued a trend for the Chiefs, who overcame double-digit leads in all three of their postseason games, including a 24-0 deficit to the Texans in the Divisional Round.

"It's just team," said Mahomes of the Chiefs' ability to come from behind. "We have heart. That's just from Day 1, (Reid) pushes us to be the best we can be and never give up."

Mahomes threw for 286 yards with two touchdowns and two interceptions in an uneven performance. But he came through when it counted, pulling out his third comeback in the postseason by throwing a 1-yard touchdown pass to tight end Travis Kelce to pull the Chiefs within one score, then hitting Sammy Watkins for a 38-yard play down the sideline to set up the go-ahead score.

Damien Williams took over from there as it was the running game of the Chiefs -- not the 49ers, as expected, that was the deciding factor. Williams, who played the first four years of his career here in Miami for the Dolphins, rushed for 104 yards and two touchdowns.

The first came on a 5-yard, third-down pass from Mahomes in which Williams just got the ball over the pylon as he was being forced out of bounds by 49ers cornerback Richard Sherman, who was beaten by Watkins badly on the 38-yard catch that set up the score.

Then, after the 49ers turned the ball over on downs when the Chiefs recorded their first sack of Jimmy Garappolo in the game, Williams burst around left end and tip-toed down the sideline for a 38-yard score that put the game out of reach with 1:12 remaining in the game.

It capped off a furious comeback that saw the Chiefs trailing, 20-10, with 12:05 remaining in the fourth quarter when Mahomes was intercepted for the second time on a pass that tipped off the hands of Tyreek Hill and into the waiting arms of defensive back Tarvarious Moore.

At that point, it looked like the suffering of the Chiefs and Reid would continue. Instead, it was 49ers head coach Kyle Shanahan who would be part of a memorable blown lead in a Super Bowl.

Shanahan was offensive coordinator of the Falcons in Super Bowl LI in 2017 when they blew a 28-3 second-half lead to the Patriots. The Falcons still head a 28-12 lead with just under 10 minutes remaining to play in that game before losing, 34-28 in overtime.

In this one, the 49ers still held a 10-point lead when they punted the ball back to the Chiefs with 8:53 remaining.

"Doesn't matter what the score is," said Kelce. "We've got Pat Mahomes. We've got an unbelievable defense and they put their foot in the ground against anybody and say enough is enough. That's what they did."

Garoppolo, who had thrown just 27 combined passes in the 49ers' previous two games, was forced to throw it 31 times in this game. He completed 20 of those for 219 yards and a touchdown, but was intercepted twice.

San Francisco's rushing attack, which had been so vital to the team's success all season, gained 141 yards, but 53 of those came on end arounds by wide receiver Deebo Samuel. The 49ers' running backs gained 86 yards on 17 carries.

Kansas City jumped ahead 10-3 in the first half, but blew an opportunity to take a lead at the half.

After tying the game on a 15-yard pass from Garoppolo to fullback Kyle Juszczyk with 5:05 remaining in the second quarter, the 49ers forced a punt, getting the ball back with 59 seconds and all three timeouts remaining.

But instead of attacking right away from their own 20, the 49ers ran the ball twice, with the Chiefs calling a timeout after the second run and San Francisco facing third-and-5.

"They had three timeouts and it was 10-10," Shanahan said. "The last thing we're going to do there is allow them to get the ball with three timeouts left."

Garoppolo connected with running back Jeff Wilson on a wheel route for a 20-yard gain to the 45. But only 14 seconds remained in the half.

Garoppolo found tight end George Kittle down the sideline for a 42-yard gain, but Kittle was called for offensive pass interference for pushing off to create room for the catch.

"Ref made the call, I've got to live with it," Kittle said. "Our defense put us into position to win the game multiple times. We just didn't get it done."

San Francisco regained the lead at 13-10 on a field goal on the opening drive of the second half, eschewing a fourth-and-two try from the Kansas City 24. And Mahomes was intercepted by linebacker Fred Warner on the Chiefs' next possession, setting the 49ers up with great field position that they turned into a 1-yard Raheem Mostert touchdown run and 20-10 lead.

But it was not meant to be.

Fate was on the side of Reid and the Chiefs on this day.

"This is a dream," said Chiefs offensive tackle Eric Fisher. "From the first time you put on shoulder pads, this is what you dream of and we just accomplished that. I'm so happy for Coach Reid. He, hands down, deserved this more than anybody."