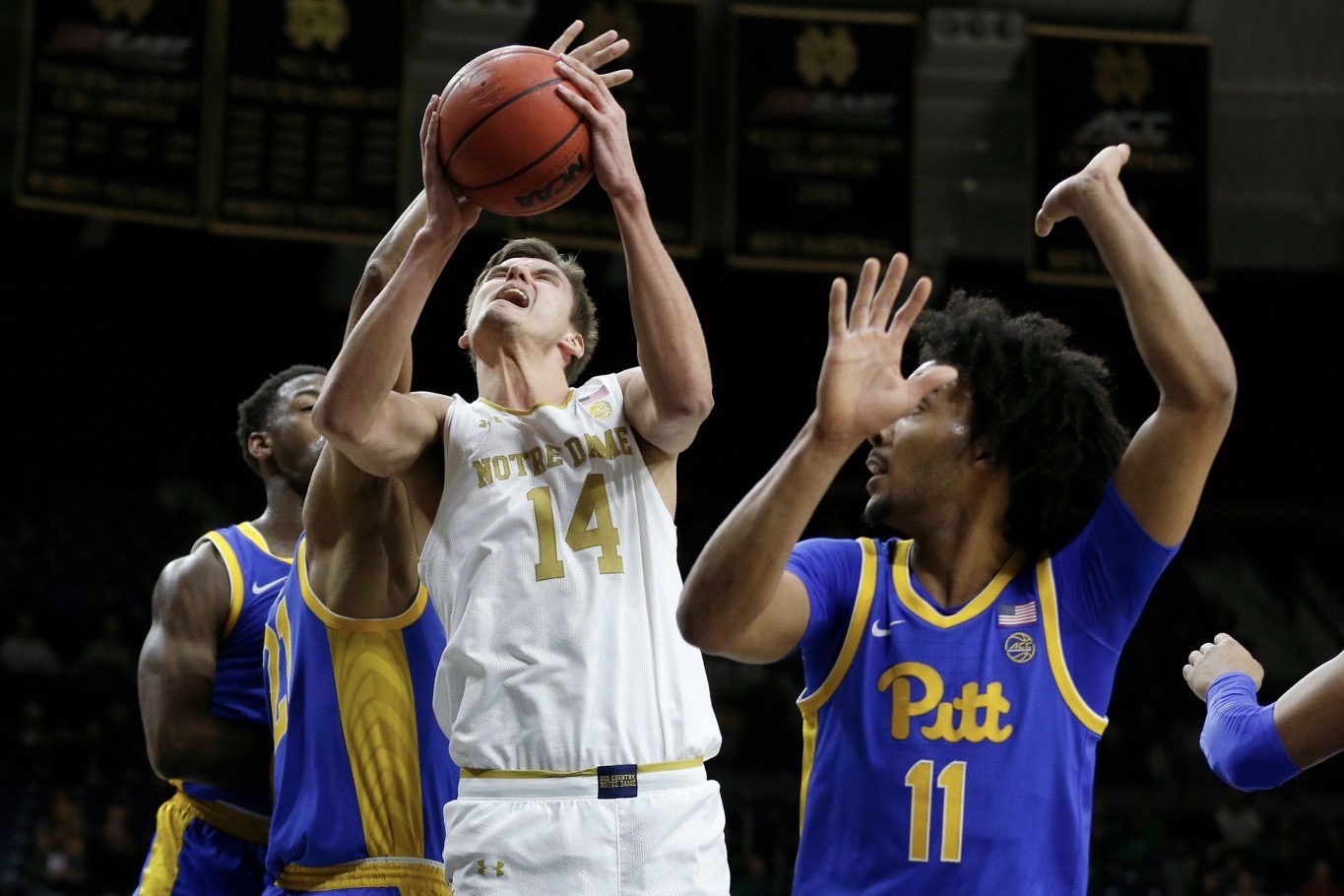 Look, I literally switched my major as a junior in college from pre-chem to journalism because I hated science and math (bye, Calc IV!) course work. That said, I'm pretty sure five is indeed greater than two.

And I'm also pretty sure Notre Dame stamped that fact all over these Pitt Panthers throughout the Fighting Irish's 80-72 victory Wednesday night at Purcell Pavillon inside the Joyce Center.

That's John Mooney finishing off a pretty spin move in the lane to kick off the gif. Then there's T.J. Gibbs knocking down a three, Prentiss Hubb drilling a triple at the first-half buzzer and Rex Pflueger connecting with Juwan Durham on an alley-oop to ice the win.

It was a total team effort, the kind of thing Jeff Capel often references when he explains what did — or didn't — go right for his own squad.

Tonight, it was more of that "didn't" stuff.

Notre Dame shot 54 percent (7 for 13) from deep in the first half, getting out to a nine-point halftime lead, while Pitt floundered throughout, shooting just 42 percent from the field — a number inflated after Pitt finished 8 for 11 from the field in garbage time.

"They backed off of us," Capel was saying after this one. "They dared us to shoot."

You know who doesn't dare you to shoot? A team that respects your shooting ability.

"And so we got good, clean looks, and in the second half we were able to knock some threes down."

What came next from Capel, though, was crucial. After talking about knocking "some threes down," which they did, going 4 for 10 in the final 20 minutes, Capel immediately reversed course and focused his attention on the opponent. Because Wednesday night, it was all about the home team.

"So this one was different, especially when they put [Nate Laszweski], when they put [number] 14 at the five. It made it even [harder] — and same with Mooney. When they go with that lineup, they’re a little bit difficult to defend and your communication really has to be high, very high. And we didn’t do a good job of that.”

It's all right there. Capel singled out Laszewski because he scored 23 points on 6 for 9 from three last year against the Panthers and he chipped in with 11 again tonight. But Notre Dame went five-plus deep, and Pitt showed up in glimpses only, with Justin Champagnie leading the way with 20 points and 11 rebounds (this, despite a four-point first half) and Xavier Johnson contributing 17 points, five rebounds and four assists in perhaps his most efficient front-to-back performance of the year.

And yet ... It wasn't enough. Not even close — because five is greater than two.

I had to ask Gibbs about all those clean looks from deep after this one — his team attempted 27 triples in all — to help find some answers:

"Just letting my teammates do the work for me," Gibbs was saying. "I think that's the beauty about our offense is that it's a constant, moving offense. Everybody's going to get a shot. Everybody's going to get a look. And just be ready to step in and knock it down. That's something that Coach has always preached since I've been here. And just sticking to that and just kind of letting everybody else do the work."

It might not be verbatim, but could that any more closely echo what Capel said?

Notre Dame has a foundation, a history, a level of experience and trust in place, and it all played out beautifully throughout these 40 minutes. Their starting five tonight: Graduate student, senior, sophomore, senior, senior.

From Notre Dame's threes to the work on the offensive glass — where they collected 15 of their 40 boards — to those late alley-oops, the Fighting Irish showcased everything that makes a team complete, that chemistry born through experience that adds up to crucial wins in ACC play.

"It's just hard, even their five man, Mooney, when he plays the five, he can shoot threes, so it was like we really couldn't sag off [anybody]," Champagnie was saying.

Kinda fitting that he was reference their five man, eh?

Share
Tweet
Email
Pirates reveal changes in development staff
Drive to the Net: Murray not living up to expectations