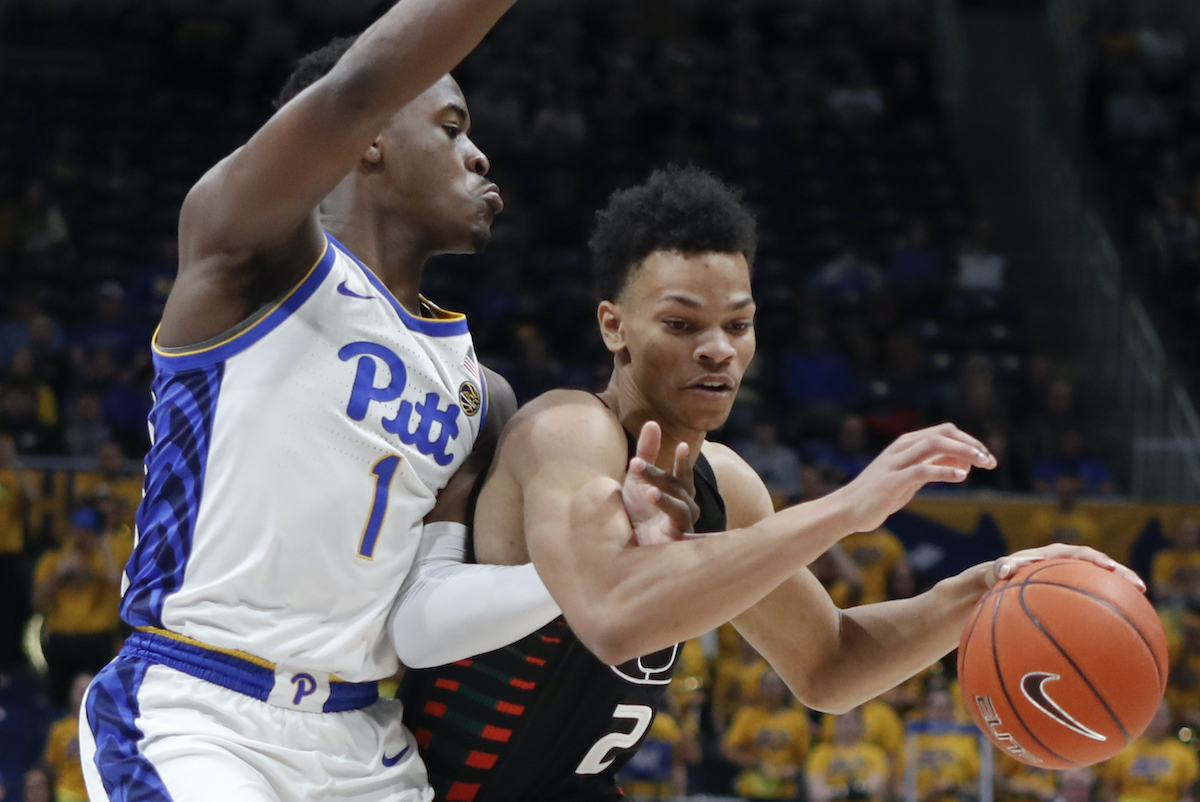 It's time to talk about Xavier Johnson.

I typed that sentence midway through the second half of this 62-57 Pitt victory over Miami Sunday at Petersen Events Center, fully expecting it to lead this story and to set the tone for the rest of the piece. Pitt was in the midst of squandering a nine-point halftime lead and letting the Miami Hurricanes storm back here at Petersen Events Center. Johnson, for his part, was missing shots. And forcing the issue. And turning the ball over.

“After I shot the shot and I air-balled it — [the] double-clutch — coach told me, he said, ‘Shoot the ball,'" Johnson was saying at the podium after this one, addressing his struggles . "He yelled at me, and I said, ‘Alright, Coach.’ And the next thing you know …"

Yeah, Mr. Johnson. What did happen next?

Yep. Same lede, different angle this time, my friends. Because it is time to talk about Johnson — and how he willed his Panthers to victory on a sun-soaked Sunday here in the Steel City. Pitt lost the lead, Miami going up by two, 53-51, after an Isaiah Wong layup with 2:41 to go. That three up there from Johnson immediately turned the tables, and Pitt never let go from there, sealing it with seven points in all from Johnson in a minute-and-a-half span, then icing the victory cake with four clutch free throws from Trey McGowens.

“Xavier’s three, the layup going through contact — but he was decisive. And it wasn’t hesitant," Jeff Capel was saying after the victory. "Those are big-time plays any time, but especially when you’ve had the afternoon like he was having. For him in that moment to forget everything and to be who he is and to do that [is huge].”

Let's rewind to that three from Johnson, though. Game on the line. His team had just coughed up the lead after outpacing Miami all day, and he had just missed a jumper, falling to 3 for 15 (20 percent) shooting on the day, including an 0-for-6 showing from beyond the arc.

But there was an interesting wrinkle in that poor shooting performance. Johnson was getting plenty of clean looks. He forced a few, no doubt, but overall, he took shots he should be taking. And that makes all the difference.

“Look, we tell all of our guys, this is the way I coach: If they’re good shots, I’m OK with them. I’ll tell you if it’s a bad shot. And what I consider a bad shot may not be what someone else considers," Capel said. "But I’m the one that matters. So I want my guys to have confidence in shooting the basketball. I don’t want them to be hesitant. And when they are, we tell them about it. It happens in practice with us where guys will miss a shot or miss a couple and all of a sudden they start passing up shots and I’ll stop the practice and tell them to shoot the damn ball. And so I want our guys to have confidence in themselves like I have in them when it’s a good shot.”

Now, back to Johnson and to that vital sequence. Here's what happened directly before that three in the first gif up there that gave Pitt the lead, same possession:

Johnson on the offensive glass, dribbles, penetrates ... and finds Justin Champagnie along the baseline. From there, Champagnie got stonewalled by DJ Vasiljevic providing some far-side help, so he kicked it back out to Johnson, who drilled the shot.

Everyone will point to the made shots for Johnson down the stretch — and they were huge — but that right up there is everything. Watch the composure. He secures a crucial offensive rebound, keeps his head up, surveys the scene and makes the smart play. Yep, italics for that one. Because in the loss to Wake Forest and in the loss to Louisville and, and, and throughout this season, Johnson did the opposite. He'd barrel into the lane, channeling a "me against the world" mentality in an attempt to lift his Pitt Panthers over the opposition.

On Sunday though? Go ahead and watch the gif again.

That's composure. And confidence. And then the looks followed, and Johnson drained them in the flow of the offense.

Funny how that works.

Share
Tweet
Email
Defensive ‘anticipation’ made Polamalu a must
Sullivan: ‘We have a real strong goalie tandem’