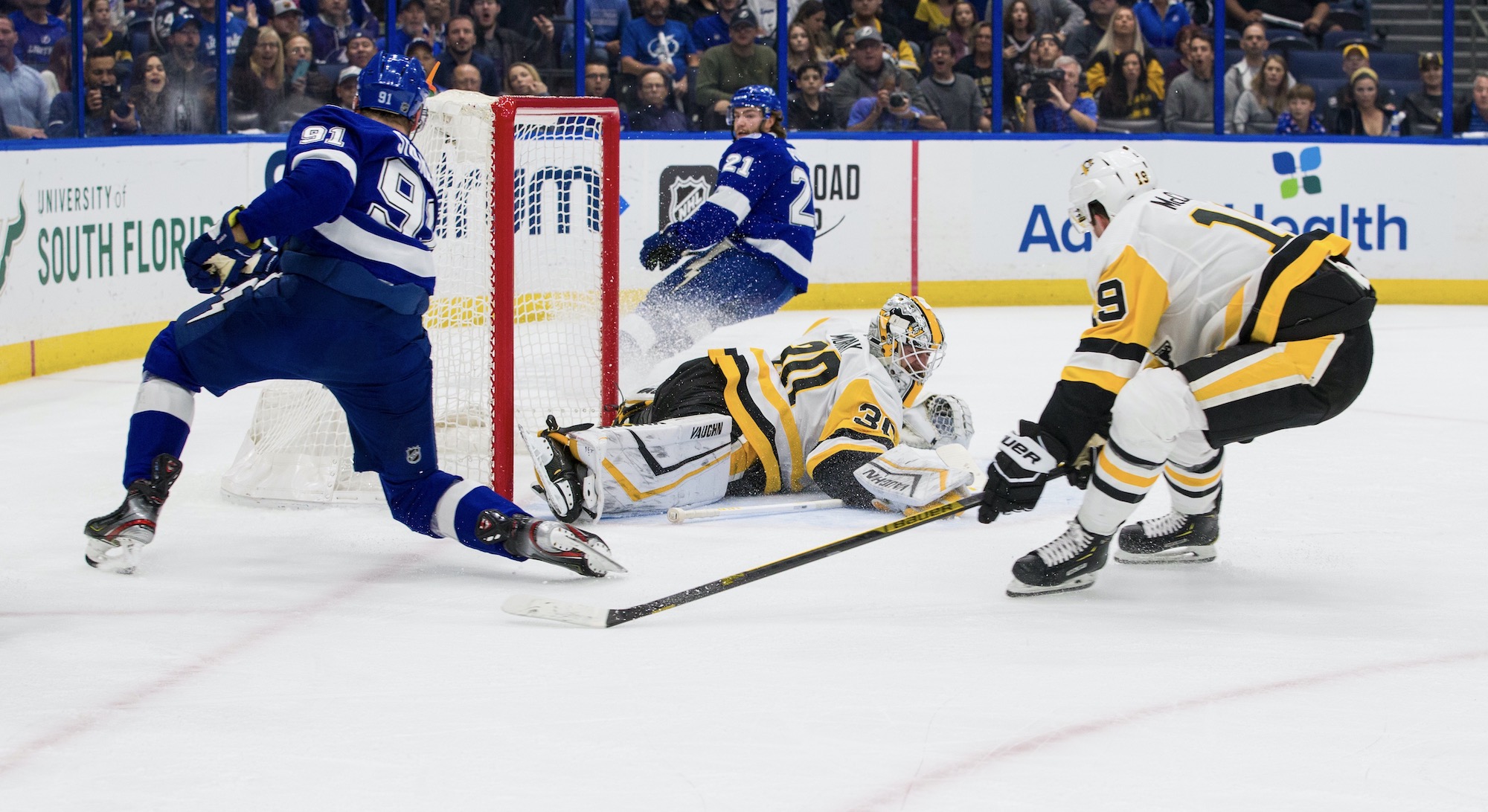 TAMPA, Fla. -- There are no automatics in this game, no guarantees that anything will play out as expected.

Still, one could be forgiven for believing that giving the Penguins -- with all of the world-class talent on their payroll -- an extended 5-on-3 power play is likely to produce a goal most of the time.

And totally inaccurate, as was proven again midway through the third period of their 4-2 loss to Tampa Bay at Amalie Arena Thursday night.

The Penguins were trailing the Lightning, 3-2, when defenseman Mikhail Sergachev was penalized for high-sticking Patric Hornqvist at 10:55.
That gave the Penguins -- who were 0-for-9 with the extra man during the previous five-plus periods -- a pretty nice opportunity salvage at least one point by getting the goal that could have put the game into overtime.

And when Lightning forward Alex Killorn sailed a puck over the glass just 26 seconds later, the Penguins had been gifted a 94-second, two-man advantage.

Under the circumstances, it had to be Tampa Bay coach Jon Cooper's worst nightmare. As he would joke later, "That's a tough group to look at. Sometimes you just have to look the other way."

Of course, given Mike Sullivan's knowledge of how his team has fared during 5-on-3s during the past two seasons, it might have been his worst nightmare, too.

If so, give the nod to Sullivan, which would make it the only decision that went to the Penguins on this night.

For during those 94 seconds, they were credited with one -- count it, one -- shot on goal and never were particularly menacing until a flurry around Andrei Vasilevskiy's crease as Sergechev's minor was winding down.

Oh, sure, Bryan Rust put a shot off the right goalpost -- "If that's an inch (to the left), it's a goal and the whole game is different," he said -- during that sequence, but for most of their time with two extra man, actually getting a puck past Vasilevskiy seemed like a secondary concern, at best.

Too bad for the Penguins that they couldn't get a tangible reward for passing the puck around as if they were trying to set up a three-point jump shot.

"I think we get a little bit stagnant," Sullivan said. "If you'd ask me if there's one thing I think we can get better at, it's just creating a little more movement, a little bit more deception."

There's nothing new about the Penguins overpassing -- that's been a franchise specialty for most of the past few decades -- but it certainly helps to explain why they have converted on just two of 12 two-man advantages since the start of the 2018-19 season, a span of 135 games.

That's a success rate of 16.7 percent when they have two more skaters than their opponent; when they have a conventional 5-on-4 power play during that same span, the Penguins are 78-for-359, which works out to 21.7 percent.

Their consistent failure to exploit two-man advantages is always exasperating, but it also was conspicuously costly in this game, because a goal when they were up two men could have had a profound impact on the outcome.

Instead, that 5-on-3 just became the latest entry in their log book of squandered two-man advantages.

"We have to learn to capitalize on those a little better," Rust said.

While that 5-on-3 -- as well as the Penguins' 0-for-3 showing on regular power plays -- might have cost Sullivan and his assistants some sleep, their night likely would have been even more restless if they hadn't gotten encouraging news on defenseman John Marino, who apparently was not badly injured after a Steven Stamkos shot struck him on the left side of the face late in regulation.

Marino went to the locker room and did not return, but Sullivan said "we think he's going to be OK" and a source subsequently said that an unspecified number of stitches were the only treatment his injury required.

Marino, coincidentally enough, had sliced Tampa Bay's lead to 3-2 earlier in the third period, as he took a feed from Evgeni Malkin and beat Vasilevskiy from the inner edge of the right circle for his fifth of the season:

That was as close as the Penguins got after Sergachev and Stamkos had staked Tampa Bay to a 2-0 lead in the opening period, aside from a 32-second stretch during the second period. That was after Malkin had made it 2-1:

... and before Anthony Cirelli scored what proved to be the game-winner to put the Lightning back up by two:

While the squandered 5-on-3 probably cost the Penguins at least one point, the Lightning's victory actually had its roots in the first period, when Tampa Bay controlled play for most of the final 10 or so minutes.

"We were on our heels a little bit," Sidney Crosby said. "They play a fast game. We gave them some time and space, and they took advantage of it."

The Lightning also benefited from a bit of luck, as Sergachev's shot probably wouldn't have eluded Matt Murray if it hadn't glanced off the shaft of Sam Lafferty's stick and dropped so that it bounced between Murray's legs.

"It's just one of those bounces that happens sometimes," Murray said. "I have to do a better job of trying to make a save there."

Goaltending did not cost the Penguins this game, however. Murray was victimized on a deftly executed 2-on-1 that culminated in Stamkos' goal and was beaten on the short side by Cirelli on another odd-man break, but he rejected a breakaway by Braydon Coburn and thwarted several other rushes during which Tampa Bay had an edge in manpower.

Those could have gone down as game-savers if the Penguins had been able to turn that extended two-man advantage into their third goal.

Instead, as has so often been the case since the start of the 2018-19 season, they got nothing out of their latest 5-on-3 except frustration.

"They're important times in games, usually," Crosby said. "They're the difference between winning and losing games, very often."

It certainly seemed to be Thursday.