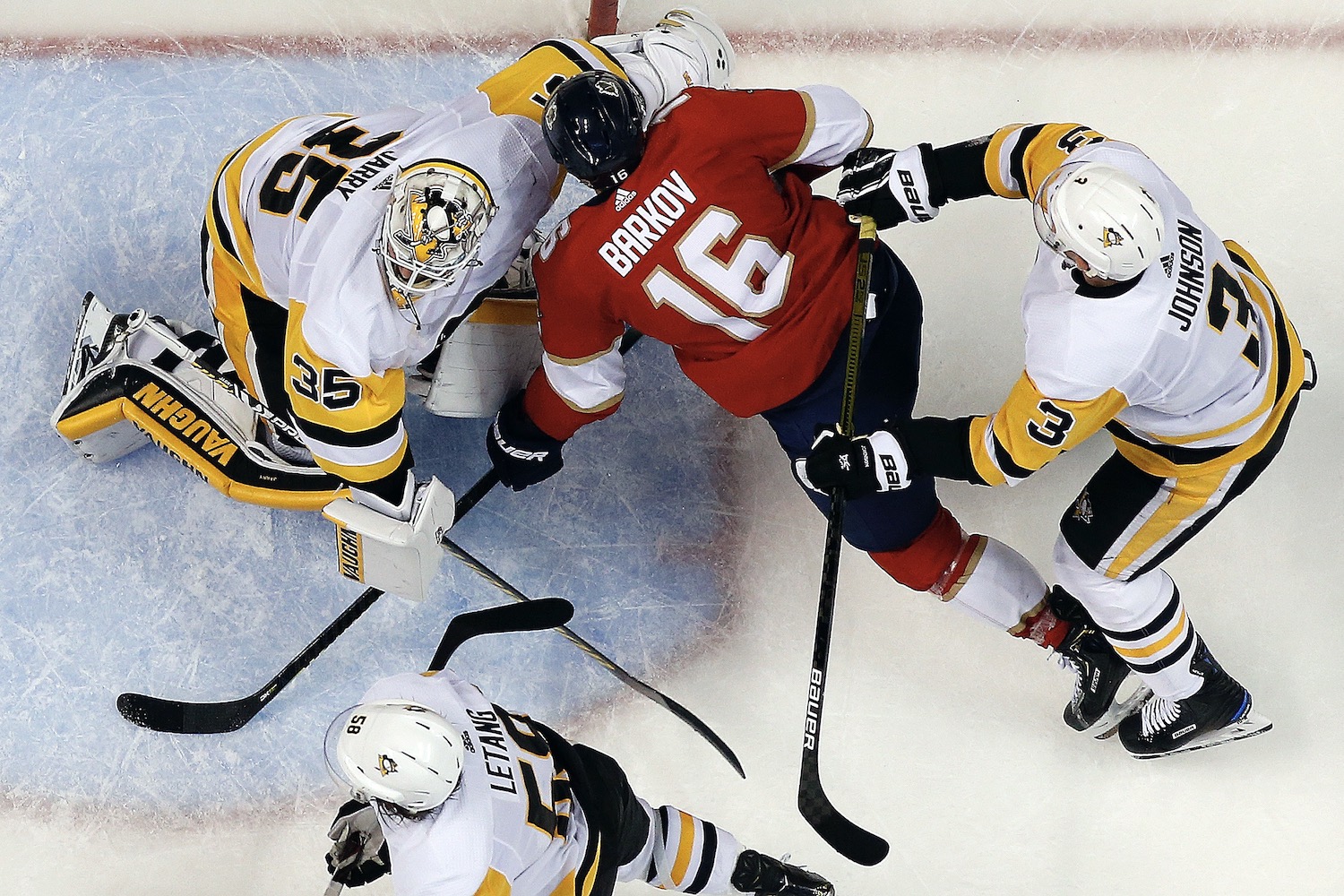 SUNRISE, Fla. -- "We did a lot of things right. You win the vast majority of these games.”

If one would've witnessed a minute -- maybe even scant seconds -- of the Penguins' 3-2 sickly, survival-mode victory over the Panthers on this Saturday night at BB&T Center, it'd have been clear that quote couldn't have come from the Pittsburgh perspective.

Which it didn't. It was spoken afterward by Joel Quenneville, Florida's coach.

No, almost all of the good things:

It was ridiculous. And yeah, it was more of the recent recurring theme that the Penguins, the NHL's tightest defensive team until a month ago, just keep regressing in that regard.

That's worrisome. If not now, when the results are still mostly right -- they're 5-3 in these eight games since this decline began, including two of three on this tough trip through D.C. and Florida -- then it'll be that way very soon.

Because this, my friends, isn't anyone's sustainable formula for success:

Tristan Jarry would be formally credited 33 saves, 10 of which came on high-danger chances, but that sequence above clearly shows four saves all by itself, even though Florida's crack stats crew somehow counted only one. (And listed it as occurring on an Aleksander Barkov 'slap shot,' even though that's Barkov right there whacking away on the backhand from the crease.)

Suffice it to say, Jarry was "terrific," as Mike Sullivan termed it.

"He did a great job making some key saves," Sidney Crosby would say, "and allowing us to hold them off."

Yep. Did it all without a visible bead of sweat, too, based on how he handled this softball I tossed his way:

The kid never stops impressing. On and off the ice, but especially on: 2.15 goals-against, .929 save percentage, both within a tick of the NHL lead.

Again, though, that's no formula. Not relying on Jarry to this extreme. Not relying on a resurgent Matt Murray, either. It's asking far too much now, and it's got zero chance of cutting it in the Stanley Cup playoffs.

Sullivan attempted to accentuate the positive, and that's understandable since coaches that routinely cut up their players after Ws soon start doing so after Ls. But he and I had a healthy exchange on this team's play of late afterward that might've been more telling about the reality.

"Well, I thought in the third period, we did a pretty good job of limiting their scoring chances," he began, and he was correct. Chances were four apiece until Sergei Bobrovsky was pulled for the extra attacker. "I thought we defended hard. You know, you've got to give their team credit. They've got some good players. They're going to get some chances."

The Panthers have some excellent players, and they've attacked the Penguins through the neutral zone as mercilessly as any opponent all winter. It's odd that they're currently out of the playoff picture.

I then asked Sullivan if he'd made any tactical emphasis or adjustment in the second intermission.

"No, it was just ... I think it's a mindset more than anything. That's what I said to the guys after the game. We've got ... you know, we've got to play. We've got to work to get the next goal. We can't sit back and and try to defend the lead. From a mindset standpoint, the minute you stop trying to score, it's amazing how it changes momentum. And I think it starts with a mindset. You've got to make sure you stay on your toes. Our calculation of risk will change a little bit when playing with a one-goal lead or two-goal lead, but we can still put pucks deep put pucks below the goal line and force teams to go 200 feet and go through five of us."

"But we're still going to try to score. And that's that I think is the important takeaway."

I've written myself the past couple weeks that the defense itself -- meaning the defensemen -- hasn't been anywhere near as much a sore spot as the forwards lagging back or missing assignments. The latter, in fact, had been the team's greatest strength through Christmas, so it's stark now that it's faded. But part of that, as I've also lamented, is that the forwards haven't generated much attack-zone time aside from the Teddy Blueger line.

Put bluntly, the Penguins' lineup, even when it's defending well, isn't necessarily built to defend. It's built to keep the puck at the far end.

This game, at the risk of oversimplification, felt like the bottoming out of all of the above. There wasn't much pressure, there was precious little being done to take over the neutral zone and, by the time the Panthers were on the attack, everyone was locked into a low gear.

How to change it?

The most obvious way would be to find forwards who are a better fit. Sullivan's barely touching his fourth line of Sam Lafferty, Anthony Angello and wow-he's-still-around Alex Galchenyuk. They logged less than five minutes both here and in Tampa. And in the third period of this one, you and I took as many shifts as they did.

It's well past time Jim Rutherford takes the hint. Fifteen days remain until the NHL trade deadline, but that's not preventing him from making immediate moves involving Wilkes-Barre. That needs to happen before the next game, again against the Lightning, Wednesday at PPG Paints Arena.

Beyond that, to repeat, Rutherford needs to add a bona fide top-six winger to replace Jake Guentzel, or this engine will stall hard before April.

Another way Sullivan can change the behavior is to change lines. Which he did in the second intermission, flipping Jared McCann and Patric Hornqvist. It worked, too, for whatever that's worth in a small sample, as both Crosby's line and Evgeni Malkin's line had their most productive five-on-five shifts.

There's also simple singling out of strategies. McCann told me Sullivan and the staff "really made sure" the high forward held to his responsibilities in the third, and that was evident in the fine work of both McCann and Dominik Simon that period.

"We got the two points," McCann added. "That's all that matters."

Can't argue that. Still feels like small stuff, though. More is needed.

• So it might be fitting that the final few seconds of this game went this way:

The Penguins had just cleared their zone, the Panthers had to cycle all the way back to their blue line, and Keith Yandle was somehow permitted to spring Evgenii Dadonov for a part-the-sea breakaway. If Jack Johnson hadn't lunged back to get a piece of Dadonov, he doesn't shoot wide, and maybe this one ends the way it should've ended.

Sullivan did not mince words on this.

"One pass beat all of us," Johnson essentially echoed. "It was pretty poor execution on our part. As one of the D out there, we have to protect the middle better than that."

• The Panthers lingered on the ice after the game, barking at referees Francis Charron and Frederick L'Ecuyer that Johnson should've been penalized and, thus, Dadonov should've been awarded a penalty shot.

I could see a minor. Maybe. If only because it's inconclusive from all replays whether Johnson got Dadonov's shaft or his hands. (Johnson, naturally, wouldn't say when I asked, other than to offer, "I was going for his stick.") But what's plainly evident is that Johnson had one hand on his own stick and reached forward with it in more of a poking motion, so it'd have been weird for Charron or L'Ecuyer to find a penalty-shot-level infraction within that.

• A few Panthers barked about it in the locker room, too, but all Quenneville would say was that the lack of a call was "interesting," and that neither ref gave him an explanation for it. (Nor are they required to.)

• Dadonov was flying all night, but his hands weren't keeping up with his feet. He registered four fairly unambitious shots on Jarry, had another blocked, then whiffed with the game on the line. Rather than blaming Johnson or the refs, he'd have been a lot better off just letting one rip.

• Same crack stats crew did credit Jarry with a save there, I feel obligated to point out. There was no save.

"Try to get in front of it and be as big as I could," Jarry explained of his approach to Dadonov. "And he missed the net."

• Oh, the Penguins did score three times on the evening, if anyone's interested in that ...

... by Kris Letang, Blueger and Crosby, with the first of those coming on Letang's patented shootout move, leg lift and all. Sergei Bobrovsky bit to his left ever so slightly.

• The first two goals came on bad bounces for Florida, the first by Letang after a friendly pass hopped over Aaron Ekblad's blade and Letang just emerged from the penalty box, the other when Johnson's aerial flick toward Blueger sneaked through MacKenzie Weegar for the 2-0 lead.

• Crosby's not skating like himself at times, and I've seen him getting what appears to be extra treatment on this trip. But that goal up there -- and I purposely left in his whole buzzsaw of a shift -- isn't scored by someone with a serious injury.

• This was all Sullivan would say of Marino's status when asked before the game: “John will not play tonight. He’ll be held out for precautionary reasons. He’ll be evaluated further on Monday when we're back in Pittsburgh.”

I'm told the team was displeased that the specifics of Marino's injury -- three breaks in his cheekbone that'll require surgery -- were learned by our outlet Friday, but I can't know if that contributed to this vague update. Regardless, it sounds like there'll be another update Monday.

• I saw Marino outside locker room after the game. He's got a shiner and a half around the left eye. Swollen and dark. Which is why, I'm guessing, doctors wouldn't perform any kind of procedure on it right away. It also might explain why he didn't fly home early. Longtime followers of the team will recall that Ben Lovejoy's face once ballooned beyond recognition on a flight that followed being similarly struck in the face by a puck.

• Hoffman's an unrestricted free agent this summer, so, theoretically, an available rental. He'd be right alongside Chris Kreider atop my wish list if I'm Rutherford. Fatal release from anywhere on the rink, as he showed by cleanly beating Jarry to the blocker side from the right dot on this night.

• I'm not one to name-drop, and I'm definitely not one to get starstruck, but I had the privilege of meeting Bobby Orr, thanks to the kind introduction from his old keeper, Eddie Johnston. We had a great talk. I won't forget it.

• Speaking of meeting people: Thanks to everyone who made it over to our subscriber meetup at the first intermission ... 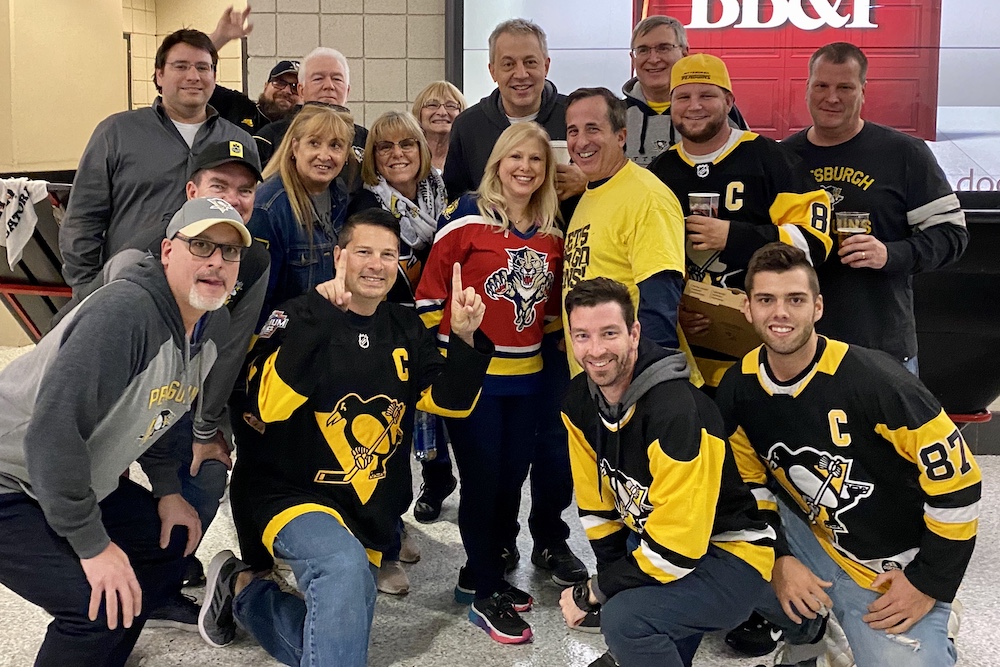 ... and that goes for everyone who came before or after this was snapped by a kind passerby!

• I'm headed back across Alligator Alley now for Bradenton, where Alex Stumpf and I will team up to cover the opening of the Pirates' spring training beginning Monday morning.

The Penguins were scheduled to fly home Sunday, after which they'll have the day off. They resume practicing practice Monday, 11 a.m., in Cranberry.