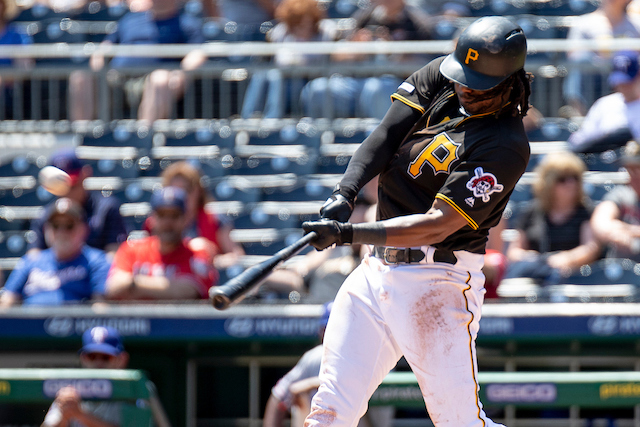 BRADENTON, Fla. -- What will the Pirates' opening day lineup look like?

No, seriously. I'm asking. What will it look like?

Derek Shelton has not given many clues on who is playing where, where they are batting or which players are in position battles as the team gets ready to head to Bradenton in a couple days.

“I’m going to go out on a limb here and say Josh Bell is probably going to play first base a lot,” Shelton jokingly said during PiratesFest.

Not exactly a bold prediction, but Shelton, Ben Cherington and most of the coaching staff have not seen most of these Pirates players in action yet. Until he does, he does not want to commit on roster spots, jobs or identifying holes on the team.

"We're just watching guys on video, we're just talking to people about them," Shelton said. "So that's why spring training's so important to us. And I think I said it [during the winter meetings] in San Diego, we're different than most clubs because of the fact that we need to put eyes on our guys. We need to see people on the field and what they're doing and how they're doing it and how they react... Until we get into that, it's probably a better March 15th, March 17th question than it is January 24th."

Until then, I can offer at least my humble opinion right now on what I think the first lineup could look like.

Just to clarify, this lineup is made solely out of players either on the roster or invitees to spring training. I'm not going to forecast them making a trade or signing and putting that player in the lineup. Your favorite free agent outfielder isn't going to be listed.

So if the regular season started today, what would the lineup look like?

An uncontroversial pick if there ever was one.

Newman is a natural choice to lead-off. He's comfortable in that role, has a high on-base percentage and has the speed to take extra bases when the opportunity presents itself.

New first base coach Tarrik Brock is a very well respected base running coach and has gotten great results at every stop he's made. Perhaps he can help Newman up his stolen base total in 2020.

Frazier's a tough hitter to find a spot for. He was a very streaky, but overall fairly average, hitter in 2019. There's a strong case to be made that a team's best hitter should bat in the No. 2 hole, and while Frazier can go on tears and be the best hitter for a week or so, Bryan Reynolds and Bell are better overall.

For now, we'll set this as a more traditional lineup: Players with good OBPs in the 1-2 spots to put people on base for the big bats in the order.

While this could change depending on if the Pirates sign a center fielder, for now, Reynolds will take over Starling Marte's spot in the field and the lineup.

Reynolds had one of the best rookie seasons in Pirates history, recording 57 extra-base hits, a 131 OPS+ and 3.9 WAR in 2019. He's a legitimate threat worthy of the three spot in just about any lineup.

Every second year player needs to face the boogeyman known as the "sophomore slump." Reynolds remarkable consistency, both in results and approach, makes that slump seem unlikely.

How will Bell follow up his breakout, All-Star worthy campaign?

Bell had a legendary month of May, but slowed down in June and July. He got a couple days off to recharge his batteries in August, and finished with a .941 OPS after his break.

With that in mind, he has two main goals for 2020: Repeat what he did at the plate and be healthy.

"I think that 155, 160 games is obtainable if I'm just ready to play everyday," Bell said during PiratesFest.

And since the Pirates are starting the season on the road against an American League team- that's the third time that has happened over the last four years- they get to use the designated hitter for their first series. Bell gets to just hit opening day.

It's hard to overstate exactly how important Polanco is to this offense. Assuming Reynolds and Newman are batting ahead of Bell because of their high on-base percentages, Polanco is the only person on the roster who could legitimately protect Bell in the lineup.

Cherington said during PiratesFest Polanco is “at 100% right now from a basic health perspective.” They're going to monitor his workload to make sure he is not rushed back like last year.

The other beneficiary of starting the season playing in an American League park.

Osuna could have a variety of roles in 2020. Backup first baseman, starting outfielder, pinch-hitter, platoon player at third base. For now, let's say he does a little bit of everything, including getting an opening day nod at his natural position.

2020 is a critical year for Moran. He had good RBI numbers last year, but his 97 OPS+ and -0.3 WAR left a lot to be desired, especially for someone who used primarily as a platoon player.

Ke'Bryan Hayes is waiting in the wings and almost certainly will break into the majors in 2020. This may be Moran's last chance to stick with the Pirates.

Heredia is penciled in at left field at the moment, but that could change if the Pirates sign an outfielder.

He is probably best utilized as a fourth outfielder or as a potential platoon player, recording a .795 OPS against southpaws in 2019. Without the other half of the platoon, he is the de facto starter.

The Pirates are prioritizing defense from the catcher position, willing to trade offense to help their pitchers. Stallings may not be much of a hitter, but his elite defense justifies a spot on the roster and him taking over as the starting catcher last year.

C Luke Maile: The backup catcher job is between him and John Ryan Murphy at the moment. Since Maile is already on the roster and worked with Shelton in Toronto and Tampa Bay, he seems like the likelier pick to stick.

INF Erik Gonzalez: It doesn't make sense to keep Cole Tucker on the bench in the majors when he could be getting reps in triple-A. This is Gonzalez's job for the time being.

OF Socrates Brito: My "bold" prediction of the spring, at least for the time being. Brito was the Blue Jays' triple-A MVP a year ago and tore up the Dominican winter league this offseason. If the Pirates do not sign another outfielder, there is an opportunity for Brito or fellow non-roster invitee Charlie Tilson to capture the fourth outfielder job.

UTL J.T. Riddle: Again, this spot is in flux depending on if the Pirates sign another player. At the moment, I'd say the final bench spot is a toss-up between Riddle and Kevin Kramer, and Kramer still has minor-league options remaining. Riddle does not, meaning he needs to make the team or be designated for assignment. Point goes to Riddle making the big club.