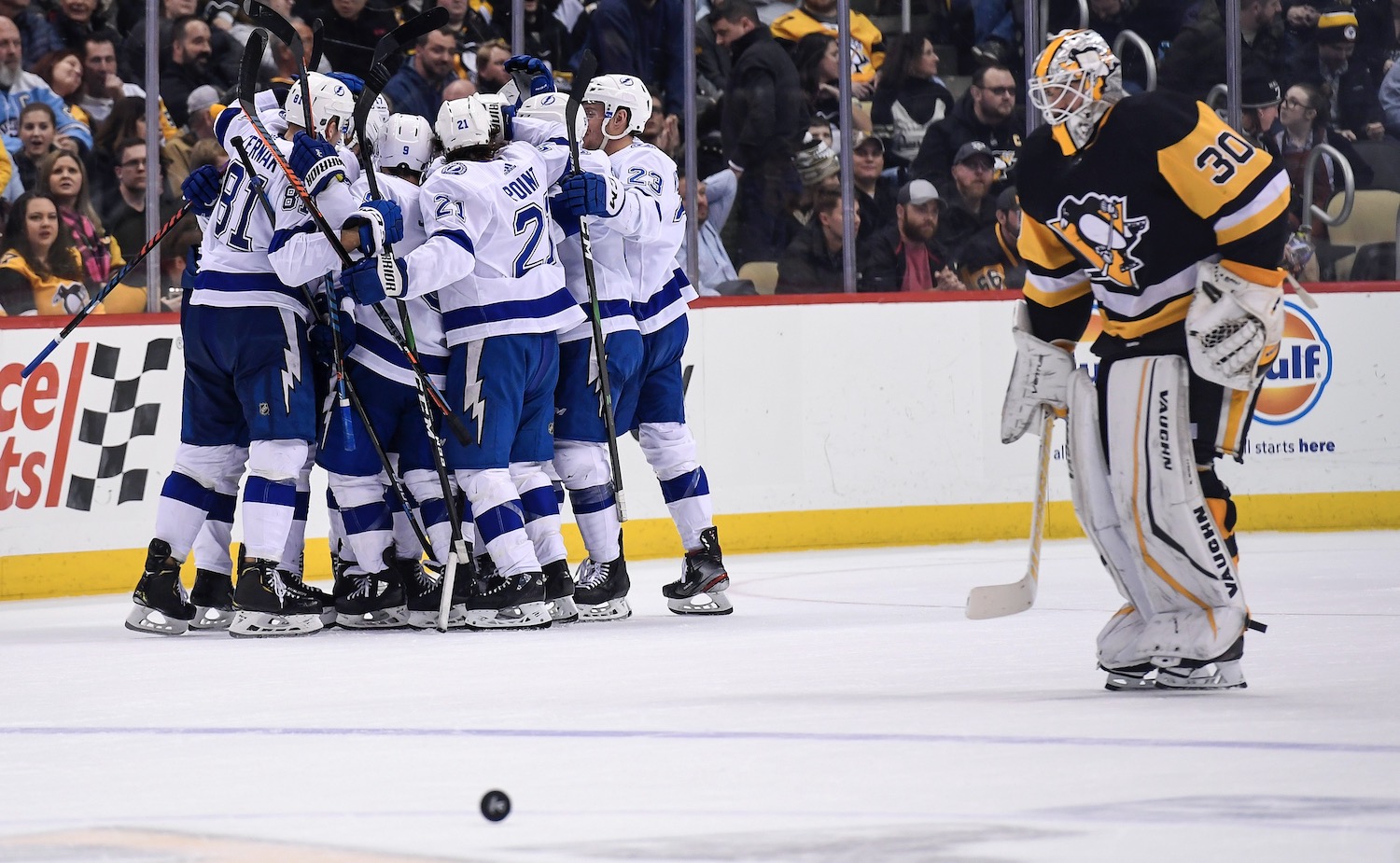 Both on the road.

Both against highly motivated opponents.

The difference Tuesday night was that by the time the third period arrived, Tampa Bay not only was running low on energy, but was down to 10 forwards because of injuries to Anthony Cirelli and Nikita Kucherov.

Hardly ideal, considering that the Lightning was tied with the Penguins, 1-1, at that point.

Under the circumstances, it was perfectly understandable that the Penguins controlled play for much of the final 20 minutes of regulation. That they ran up a 16-9 advantage in shots then. That they were awarded the only two power plays of the period.

The only real surprise was that none of that was reflected in the final score.

For Tampa Bay -- which has earned a reputation for hacking up hairballs in high-stress situations during the playoffs in recent years -- managed to hang on long enough for Yanni Gourde to stick a shot under the crossbar behind Matt Murray at 2:45 of overtime to claim a 2-1 victory at PPG Paints Arena.

"That was definitely a MASH unit tonight," Cooper said. "This is a tough league to win in, especially against a team as talented as that. That was one of the guttier (victories) I've seen."

Although Gourde authored the game-winning goal -- the first time he scored in 36 games -- he was not the guy most responsible for Tampa Bay's victory.

That would be goalie Andrei Vasilevskiy, who turned aside all but one of the 36 shots the Penguins threw at him.

On a night when Murray, who made 36 saves, was very good, Vasilevskiy was even better.

Of Vasilevskiy's 35 saves, none was more striking than his stop on Bryan Rust during a 2-on-1 break with Jared McCann at 6:20 of the second period.

Rust launched a shot from inside the left circle that Vasilevskiy managed to get his blocker on, sending the puck off the crossbar and ultimately, down onto Vasilevskiy's back before play was stopped.

"I don't think there's ever been a time in my career when I thought I had one more," Rust said.

He wasn't alone. Many in the crowd of 18,445 and even some of the broadcast crews working the game believed his shot had made it into the net.

"That's a save that pulls you out of your seat," Cooper said.

Vasilevskiy recorded five of his stops on Jason Zucker, who had a solid, if unspectacular, debut with the Penguins one day after being acquired from Minnesota.

He played left wing on Sidney Crosby's line -- Patric Hornqvist started on the right side, but was replaced by Dominik Simon as the game progressed -- and showed flashes of the skating and skill that made acquiring him a priority for Jim Rutherford.

"He brings a lot of speed," Kris Letang said. "He's going to create room for guys out there. As far as his battle level, he's an intense guy. He works really hard. It's good to have him on our side."

How long Zucker will remain with Crosby is impossible to predict, but Crosby seemed encouraged by how they worked together.

"We had some good looks tonight," he said. "And we'll build off that."

The Penguins had some of those on their four power plays, too, but only managed to score on one of them, as Evgeni Malkin drove in a Crosby rebound at 11:31 of the opening period to give them a 1-0 lead:

Had they converted on either of their chances with the extra man during the third period -- including one awarded when Lightning defenseman Kevin Shattenkirk was called for slashing Simon with just 4:37 to go -- it might have had a profound impact on the outcome of the game.

"We have to do a better job when we have an opportunity to win the game like that," Crosby said.

Trouble is, their power plays became less menacing as the game went along. The failure to capitalize on those two third-period chances was an echo of their 4-2 loss in Tampa last Thursday, when they were unable to take advantage of an extended 5-on-3 late in regulation. A goal then likely would have pushed that game into overtime.

"We weren't as good late in the game," Sullivan said. "I think our power play is at its best when we just take what they give us and don't force plays. I thought we forced some plays late in the game and, as a result, we ended up chasing the puck, or they got clears.

"When we just take what they give us and we shoot the puck, a lot of times we can create offense off the spray, or the rebound. The goal we got was an example. ... Sometimes, we try to pass it into the net or we're looking for a better play and that better play doesn't materialize."

The Penguins entered the game with five regulars -- forwards Jake Guentzel, Dominik Kahun and Nick Bjugstad and defensemen Brian Dumoulin and John Marino -- unavailable because of injuries, but the Lightning was missing a few key guys, as well, because Steven Stamkos and Ryan MacDonagh are hurt.

Factor in fatigue stemming from having to go to overtime to earn a 2-1 victory in Columbus 24 hours earlier, and it was a commendable performance by the Lightning. Not that the Penguins were about to be overly impressed by the way Tampa Bay battled through that adversity.

"They're a good team," Jack Johnson said. "We don't have a lot of sympathy for other teams. Everyone goes through that over the course of a season. ... It was a good game against a good hockey team."

To be sure, the Lightning's lineup still was studded with difference-makers like Victor Hedman, Ondrej Palat and, of course, Vasilevskiy.

"They're one of the top teams in the league," Sullivan said. "They have a lot of offense. They have good, solid defensemen. They have a real good goalie. We knew it was going to be a battle."

Which it proved to be, as the point the Penguins picked for getting the game to overtime will go down as the only one they earned in three games against the Lightning this season.

Johnson, though, said that Tampa Bay's success during the regular season will be a non-issue if the Penguins and Lightning happen to collide in the playoffs this spring, a meeting that most likely would happen in the Eastern Conference final.

"You have to get to the playoffs, first and foremost," Johnson said. "Once you're in the playoffs, the regular season means nothing."