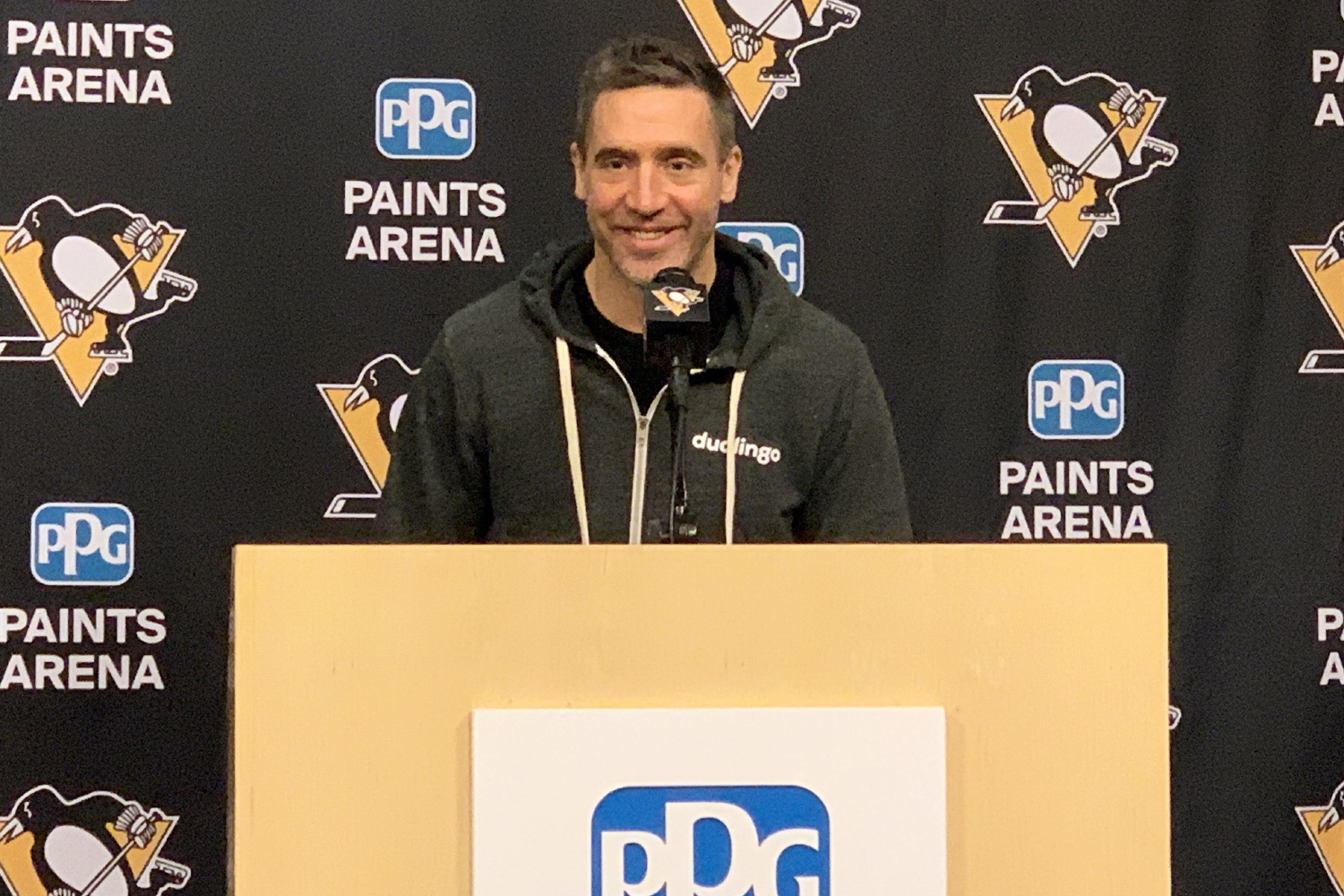 I checked -- "superstar" translated into French is just "superstar." So, "superstar treatment" is "traitement de superstar."

That might come in handy tonight when the Penguins host the Canadiens at 7:08 p.m. at PPG Paints Arena. It's the team's French language promotional night, and Max Talbot will serve as the team's ambassador.

Talbot's main role tonight will be that of PA announcer, and will make goal and penalty announcements in French to go along with Ryan Mill's usual English calls. It's not a role he's taking lightly.

"I've been watching a lot of Habs games" Talbot told reporters on Friday morning. "I'm like, what are the terms? As a hockey player you block out the noises, so you don't pay attention to that stuff. I'm anxious about it, I'm trying to use the right words and the right grammar and the right penalties for spearing and stuff like that. I hope there's not too many penalties. It's going to be challenging."

He gave a little preview of what fans can expect tonight.

"I'll drink some tea today," he laughed. "It'll be better than that."

The Penguins' promotional night is in partnership with Duolingo, a language-learning website and app.

"It's a great advantage now to have apps like this," Talbot said. "I remember I went to Russia, and I used an app like Duolingo to try and learn a new language, and it gave me the basics ... For me, I was older in age where I was thinking I was maybe going there for one year, one season, so you'e kind of like, 'Oh, I'll just wing it.' Looking back, if I knew I was going to be there for three years, I would have really put my mind into learning a language faster and more efficiently."

Talbot, in trying to learn Russian in his last three seasons in the KHL, could relate to Evgeni Malkin in his early years learning English in America.

"Geno, he didn't speak much English," Talbot said. "He was way worse than me at English, we couldn't communicate at all. He was my roommate. I remember at the time, for Geno to learn the English language, I realized he was good one day when he was like, 'Max, order room service for me.' I'm like, 'What do you want?' He's like, 'Steak, medium rare.' I'm like, 'You can call yourself! You're able!' That was two years after he came to Pittsburgh."

In those early seasons, the French Canadian players shared a strong bond, facilitated by Mario Lemieux.

"He would invite all of the French Canadian players to his home," Talbot said of his rookie season with Lemieux. "We created something with Mario, we were there with all the guys. Getting to spend time with Mario Lemieux as a kid, you're 18 years old and he's your hero."

During Talbot's time in Pittsburgh, he played with a lot of French Canadians who had big roles on the team -- Marc-Andre Fleury, Kris Letang, Pascal Dupuis, to name a few. He added that even Crosby, coming from Rimouski in the QMJHL, was "always speaking French" with that group. Talbot also mentioned some notable French Canadians in the Penguins' history -- Lemieux, Jean Pronovost, and Pierre Larouche.

"The heritage of the Penguins and French people has been great," Talbot said.

The French connections made Talbot's time in Pittsburgh easy, but Talbot also thought Pittsburgh's culture made him a great fit here.

"I was young, single, I had a lot of time on my hands," Talbot laughed. "I cared about this city. I feel like I come from a blue-collar family, both of my parents worked really hard. Pittsburgh is a blue-collar city, and I wanted to be involved in the city. ... I felt like this market was great. We all grew up together as a Penguin team, also with Sid, we're all the same age and wanted to help the city.

"The Penguins fans were really behind us."

After Talbot was done speaking to the media, he ducked out of the room to find Crosby so the two could catch up.