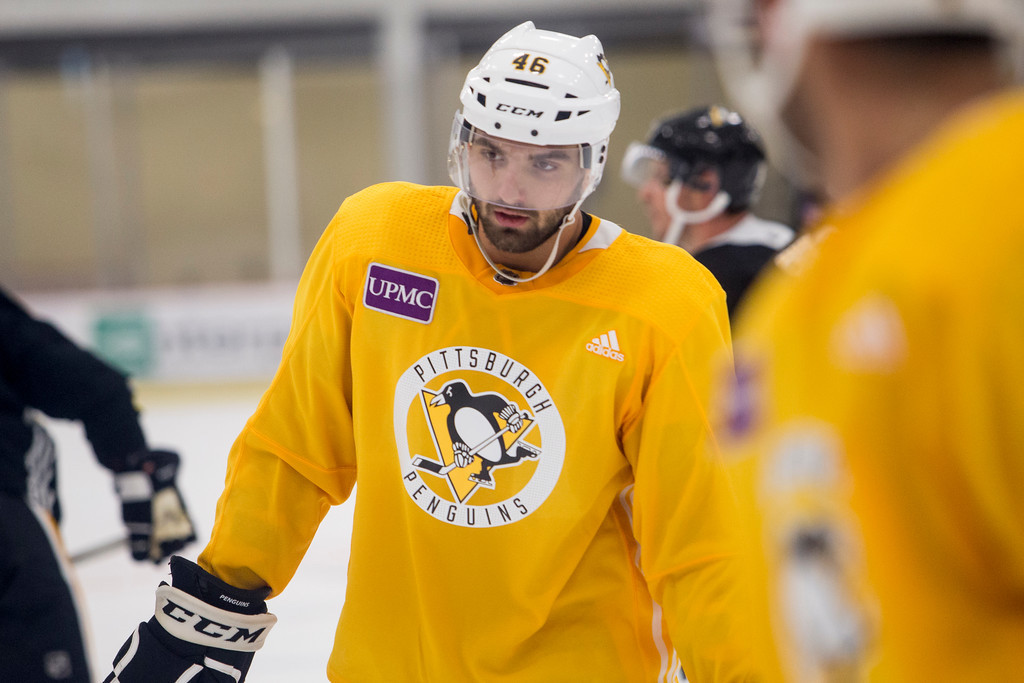 And he has one -- yes, one -- in the Penguins' past 30 games, as they prepare to face the Canadiens Friday at 7:08 p.m. at PPG Paints Arena. And Aston-Reese has gone 14 games since getting that one Jan. 4 in Montreal.

Now, there are countless examples of guys who were productive at one level and struggled to put up numbers at the next, and it's not as if Aston-Reese is regarded as one of the Penguins' primary sources of offense. He has established himself as a valuable member of what has become a highly effective third line, alongside Teddy Blueger and Brandon Tanev, and has secured a regular spot in the Penguins' penalty-killing rotation.

Nonetheless, Mike Sullivan said after practice Thursday that he believes Aston-Reese, who has five goals and seven assists in 55 games this season, is capable of showing up on the scoresheet more often than he has lately.

"We do think he's capable of more," he said. "Zach's a real good player. He has good instincts. He's strong in front of the net. I think it's just going to take staying with it, a stick-to-itiveness and shooting the puck when he has the opportunity, going to the net when he has the opportunity. He's good at the net-front. He's shown an ability to score in every level that he's played at, and we believe he has the ability to score at this level."

Aston-Reese acknowledged that, "it's a little frustrating, not scoring," but noted that he's had numerous opportunities to break out of his slump.

"I don't think it's for a lack of chances, either," he said. "There are games where I'll have three or four shots and pretty good Grade-As, and it doesn't want to go in for me right now, but that's fine. I've had that happen so many times throughout my career.

"I'd rather be defensively sound and not getting offense than to be getting offense and not being able to play defense. A lot of coaches in this league kind of preach defense-first, and being able to have that element of your game -- where if you're not producing, you're still having an impact on the game -- I think that's pretty important. Besides, there are plenty of guys who will put the puck in the net."

For what it's worth, Aston-Reese never had a major offensive impact early in his career at any level -- for example, he had eight goals in 35 games as a freshman at Northeastern -- but eventually became a reliable contributor at each of his stops.

"My career is a marathon, not a sprint," he said. "It's taken some time. It's always been that way. ... The frustrations I've been though in my career, it's just water off a duck's back."

• Dominik Kahun, who has missed the past six games because of a concussion, practiced with his teammates for the first time since being injured. He was quite involved in the workout, sitting out only drills that involved contact. "Being out there with other people again, the timing was new for me," he said, adding that he does not have a target date for returning to the lineup. Kahun said he had a suspected concussion while playing in Germany three years ago, but that he resumed playing a week after that incident.

• Jason Zucker, who made his Penguins debut Tuesday, said he believes the differences in the system his new team plays, compared to the one employed by his former club in Minnesota, work to his advantage. "I think it suits me well. It's speed-based and pushing the pace and trying to keep the pace up at all times. I think that works to my favor." The practice Thursday was his first since joining the Penguins, and Zucker said, "It feels like it's been a month since I touched the puck."

• Here are the personnel combinations used at the practice:

Share
Tweet
Email
How much salary can Penguins add at deadline?
Why Pirates for Dyson? ‘Ain’t too much out there’