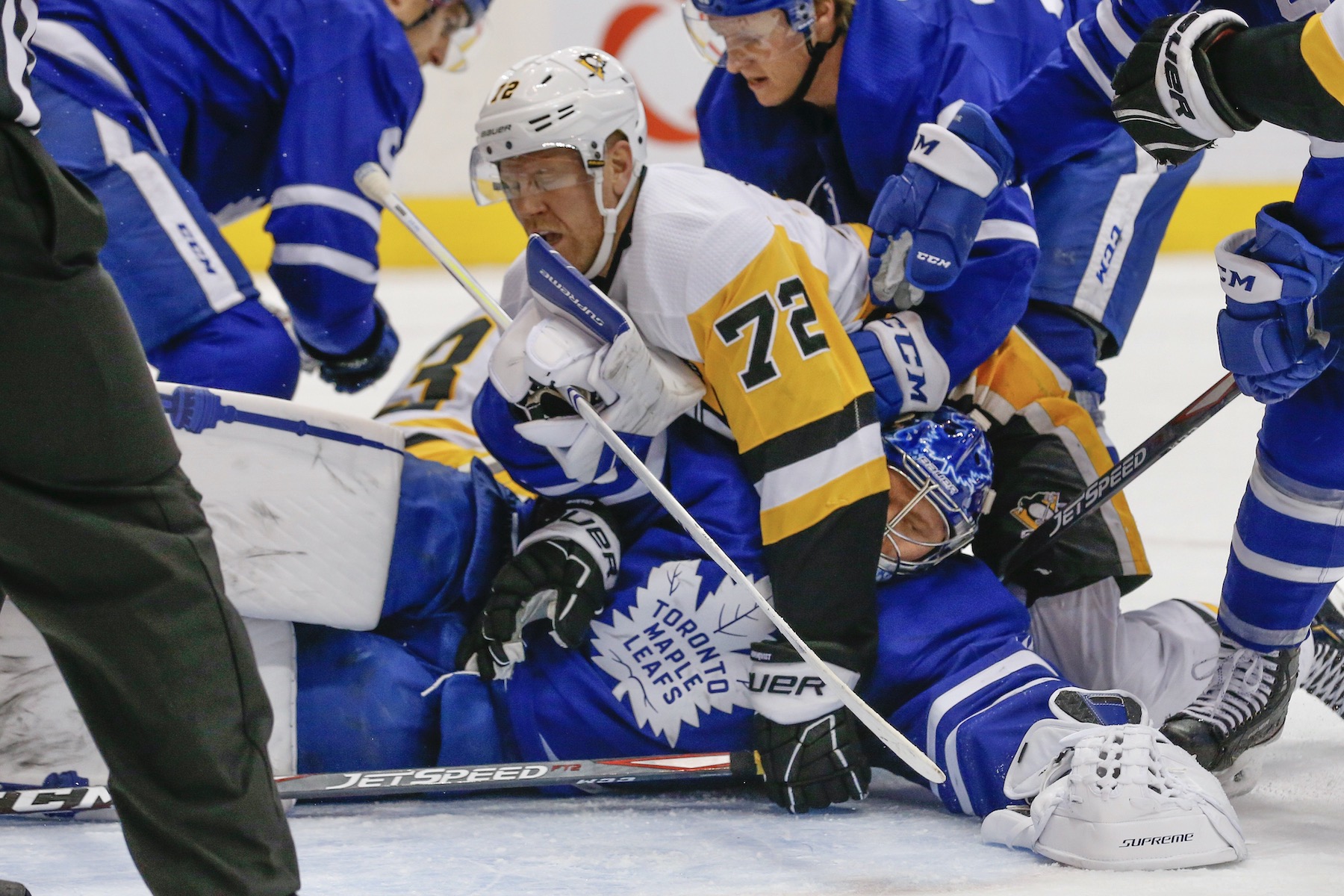 TORONTO -- This city likes to think of itself as the center of the hockey universe, with a deep appreciation for everything about the game.

If that truly were the case, the Penguins' 4-0 loss to the Maple Leafs at Scotiabank Arena Thursday night would have been stopped for a brief ceremony every time the Penguins won a faceoff. Those were, after all, pretty special occasions. Rare enough to be darned near historic, actually.

And it's not just that the Penguins lost a significant majority of the draws -- Toronto finished with a 33-20 advantage, a success rate of 62 percent -- but that three of those spawned sequences that ended with Matt Murray fishing the puck out of his net.

The Maple Leafs scored their first two goals four seconds each after winning an offensive-zone faceoff, their fourth five seconds after doing so.

That trend was pretty hard to ignore but, from Mike Sullivan's perspective, not at all difficult to understand or explain.

"It's an important part of the game," he said. "What was discouraging was, we won a couple of draws and we didn't get the puck out (of the defensive zone) because we didn't execute, so we put ourselves in a position to have to take more. And then we just didn't compete hard enough off the loss. We didn't defend hard enough. We didn't defend the net-front nearly as hard as we need to."

Those sequences, he suggested, were a symptom of a more troubling issue that has developed in recent weeks: A general decline in the Penguins' overall defensive play.

"Commitment," he called it.

"We have to go back to work," Sullivan said. "The first thing we have to do is recognize it, and then you have to pay attention to details."

Here's one detail the Penguins shouldn't overlook: The loss dropped their record to 37-16-6 and, coupled with Washington's 4-3 overtime loss to Montreal, put them in a tie with the Capitals for first place in the Metropolitan Division.

What's more, the defeat might have cost them more than just a couple of points and sole possession of the top spot in the Metro, because forward Dominik Kahun, playing in just his second game after missing eight because of a concussion, went to the locker room during the third period after appearing to injure his left leg or knee blocking a shot.

Sullivan said he did not have an update on Kahun's injury.

While the Penguins looked sluggish and out of synch for most of the evening, Toronto played like a team that believed its season might be on the line during those 60 minutes. Which is pretty much how Maple Leafs coaches and players had described their situation in the wake of a 5-2 loss at PPG Paints Arena Tuesday.

"That was a great response by everyone, I think," goalie Frederik Andersen said. "The way we want to be."

Indeed, if not for the logo on the front of their sweaters and the nameplates on the back, there wasn't much reason to recognize this team as the same one that had looked largely disinterested for most of Tuesday evening.

"You just don't like to get embarrassed," Toronto coach Sheldon Keefe said.

Toronto got the only goal it would need at 7:45 of the second period, when defenseman Jake Muzzin beat Murray from the left point. Murray did not appear to see the shot, which was understandable since the crest on Toronto forward Denis Malgin's sweater was just a centimeter or two from Murray's eyelashes.

That might have been the Maple Leafs' most effective screen of the game, but it was hardly their only good one.

"They were getting bodies to the net really well," said Murray, who finished with 26 saves.

And it also was not the only time they would score almost immediately after controlling a draw in the Penguins' end. That time, it was John Tavares besting Crosby, but No. 2 came after Tavares won a faceoff from Teddy Blueger and the fourth in the wake of Auston Matthews beating Evgeni Malkin.

Although those three faceoff wins had the most direct impact on the outcome, Keefe said his team's success on draws reflected the emphasis it put on rebounding after its listless showing 48 hours earlier.

"It's just a sign of how engaged we were in the game," he said. "Guys were hard on the puck, in all areas."

That had to be a great relief to the crowd of 19,386, many of whom probably entered the building fearing that the best player for the home team might be organist Jimmy Holmstrom.

The Penguins, though, insisted that they were fully prepared for the Maple Leafs to elevate their game.

"We knew they were going to bring their best," Murray said. "And they did."

The challenge for the Maple Leafs now is to prove that this performance wasn't an aberration, that they can replicate it on a regular basis during the stretch drive.

Do that, and their chances of getting back into the playoffs will be greatly enhanced.

"We’ve just got to find that energy, that bite, that jam that we had tonight and be able to bring that on a consistent basis," center Alex Kerfoot said.

Doing that hasn't been a problem for the Penguins for most of this season and, despite Sullivan's well-founded concerns about the deterioration in their defensive work of late, they continue to hover near the top of the overall standings.

This game, though, offered a refresher course in what can happen when their focus and intensity wane. When they routinely get outworked and lose puck battles.

And, yeah, when the other team is able to control too many faceoffs in the Penguins' end of the rink.

"We didn't deserve to win tonight," Sullivan said. "They played better than us. They outplayed us. They got what they deserved, and so did we."