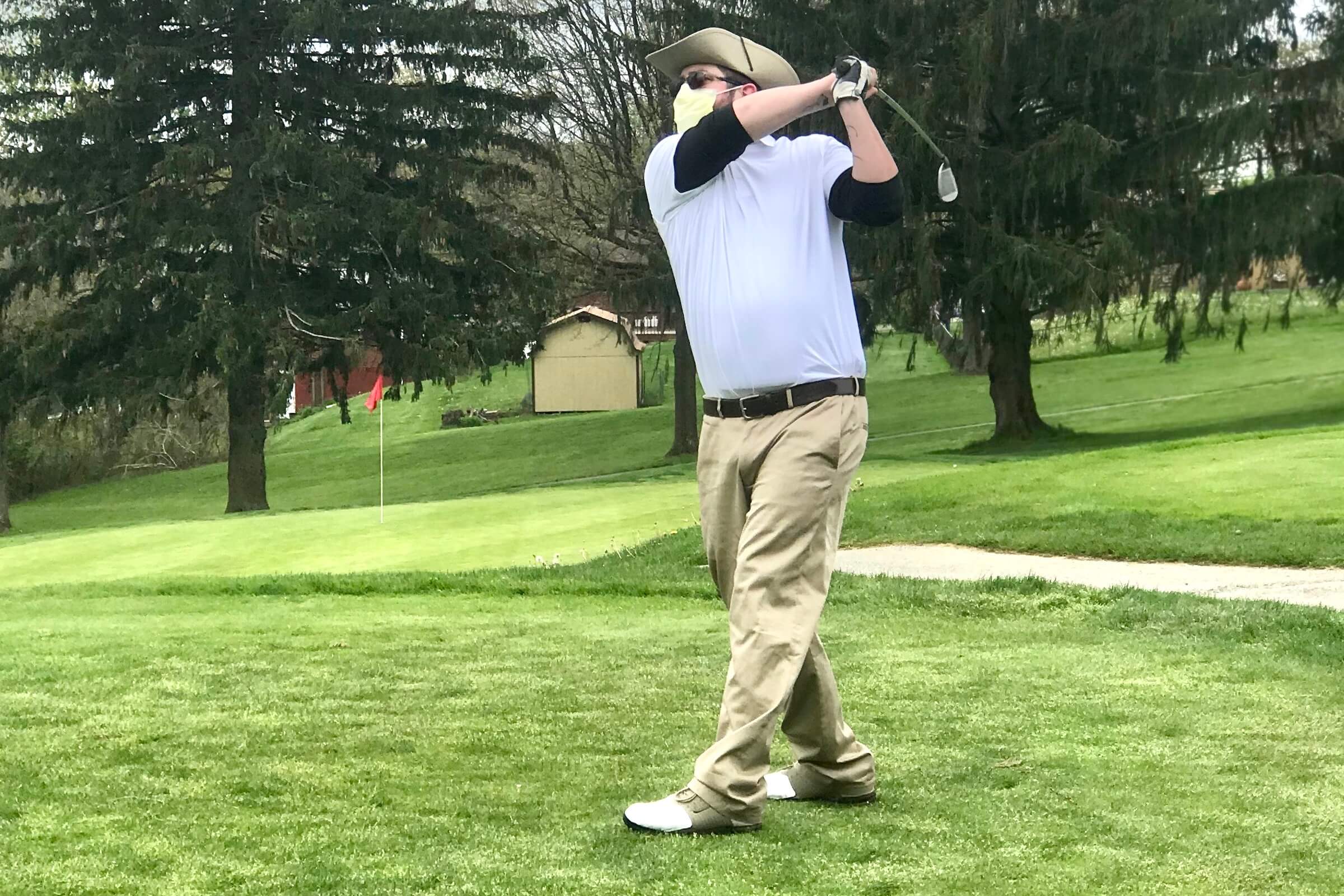 That all changed Friday.

Gov. Tom Wolf ended his decision to keep the state's golf courses closed for business in response to the coronavirus outbreak on May 1, leaving DeNinno and his staff at Moon Golf Club -- and courses across the commonwealth -- more busy than usual on a typical Friday in the Spring.

"I thought it was ridiculous," said Bill Fontana of Moon Township, a regular at the club. "You're outside. You're with somebody you know and golf with. With one cart per person, that would have been fine. Leave the flag in, that's fine. No rakes in the sand, that's fine, too. Why close it? They don't stop me from walking outside on the street, right?

Golf courses had been shut down in Pennsylvania for over a month as part of a stay-at-home order by Wolf to combat the spread of coronavirus. But courses in neighboring Ohio and West Virginia remained open despite similar orders from the governors in those states.

DeNinno had expected Wolf to begin easing restrictions on courses across the commonwealth soon. But he wasn't expecting the news earlier this week that courses would be able to open May 1.

It didn't take long for the weekend schedule to fill up.

The course was packed on Friday with foursomes going out every 15 minutes.

"We're absolutely happy to be open," DeNinno said. "It's a testament to how anxious people were to get out. Within four minutes, they were calling. It took one day to sell out Saturday. It took another day and a half to sell out (Friday). Sunday isn't too far off. People want to get back. They've missed being on the golf course. They've missed the staff. This place is kind of like home for them.

"They missed normalcy. This is what you do on a Tuesday afternoon when you're in a group. They're eager to get out. They've been confined to their homes. Now, they're getting out on 140 acres."

Even though the weather wasn't the best, with temperatures in the 50s and a steady wind, nobody seemed to mind.

Everyone had their own cart. Pins weren't pulled. Carts were cleaned immediately after they returned to be ready for the next rider. 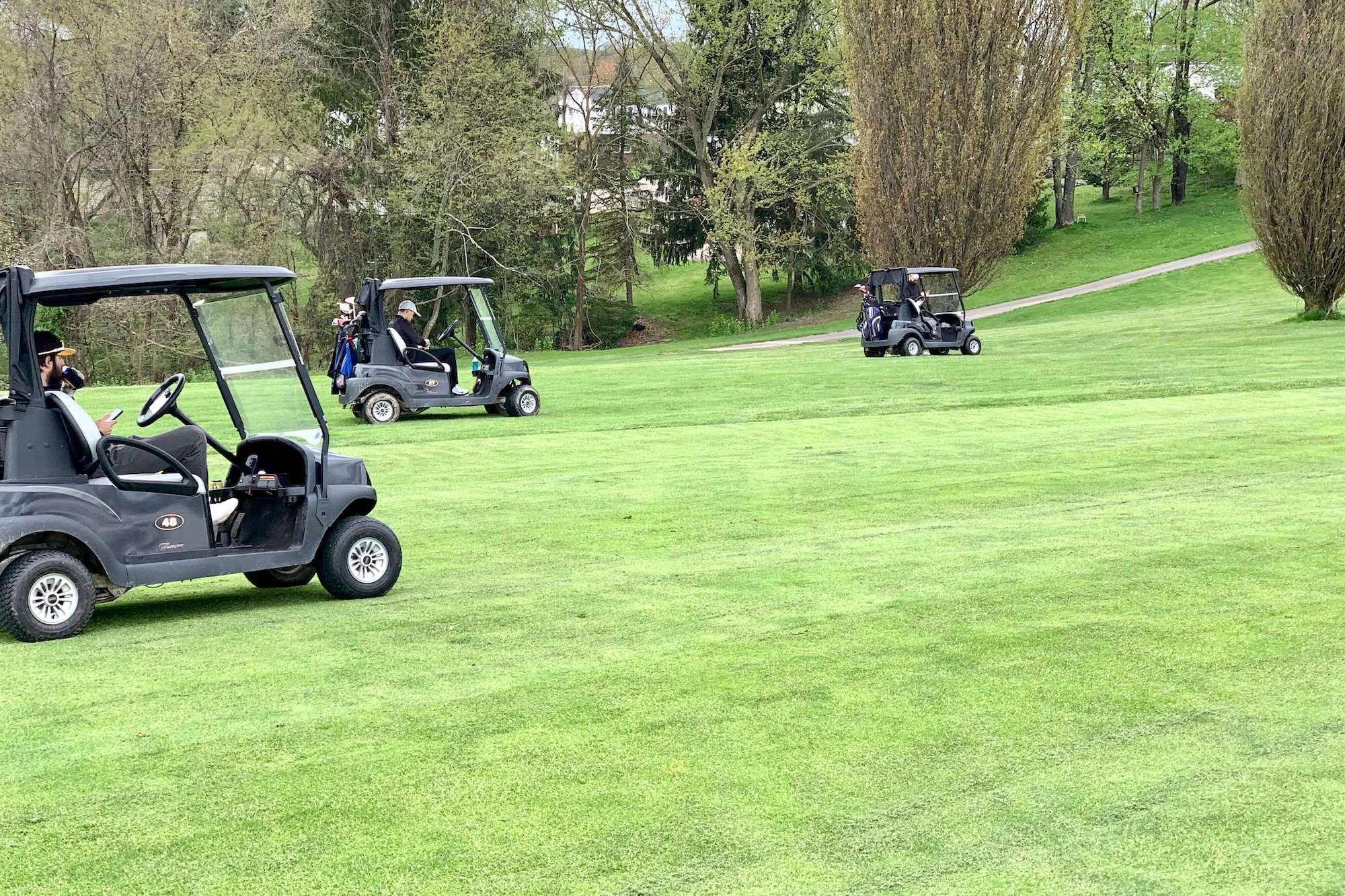 "I tried Ohio. It was so booked up you couldn't get a tee time until 5, 5:30," Fontana said. "You could only play nine holes. Now, you're able to get out of the house and do something."

Much like other facets of the world that have had to find ways to deal with social distancing, the course fast-tracked some innovations that made it easier for players to book their times or make a payment. The clubhouse remains closed, but players can book their tee time online at the club's web site. No money has to change hands.

Drive up. Load your clubs onto the cart and go.

"We talked to some other courses and some around here, too, as to what they were doing. Some things we were already prepared for," DeNinno said. "We already knew and prepared for one person per cart, not touching the flag sticks. We've chosen to invert our cups so the ball barely drops. We had benches on every hole. Those have been removed along with water coolers and the rakes in our bunkers.

"We planned on doing some things with new technology throughout the year. But it all got moved up. It's been an interesting four days."