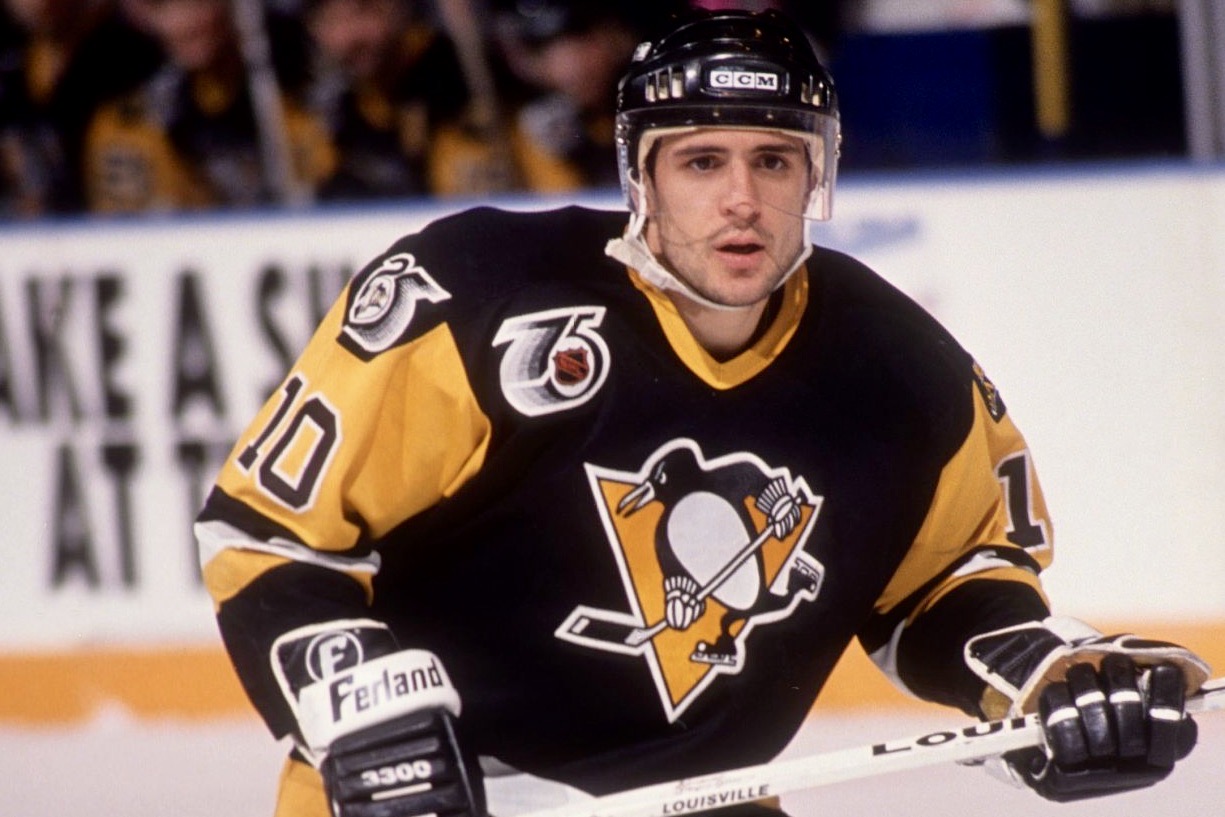 Installment No. 5 in an occasional series highlighting the most memorable game in which players participated as a member of the Penguins.

The Penguins were down, 2-1, in the series. The best player on their team -- and the planet -- was in street clothes, nursing a broken hand caused by an Adam Graves slash during Game 2. Another of their future Hall of Famers also was missing, too, because of a knee injury, also suffered in Game 2.

Of more urgent concern, the Penguins were trailing, 4-2, in Game 4 when Gordie Roberts was assessed a major penalty and game misconduct for cross-checking at 5:19 of the third period. Another Rangers goal while Roberts was in the penalty box, and the series figured to be all but formally wrapped up.

Some inspired penalty-killing and the goaltending of Tom Barrasso, allowed the Penguins to survive that crisis, so when Roberts' penalty expired, his team still had a pulse.

Just not much of one. Not with under 10 minutes remaining in regulation and a two-goal deficit against a team that had been the NHL's best during the regular season. What the Penguins needed at that point was a near-miracle.

And Francis delivered one.

Eighteen seconds after Roberts' penalty expired, Francis carried the puck through the neutral zone and, as he approached the Rangers' defensive zone, launched a shot at Richter.

And, from a Penguins' perspective, miraculously.

Game 4 would never be the same. And the course of that spring's playoffs had changed in a heartbeat.

Just 75 seconds later, Troy Loney converted a Jaromir Jagr set-up to pull the Penguins even, and ultimately, to put the game into overtime.

It wasn't there long.

A mere 2:47 into the extra period -- and 90 seconds into a Jeff Beukeboom minor for tackling Jagr that gave the Penguins their sixth power play -- Larry Murphy swiped the puck from Messier in the New York end and threw it toward the net.

Francis, with his back to goalie John Vanbiesbrouck, who had replaced Richter after the Penguins tied the game, tipped the puck between his own legs and inside the left post to give the Penguins a 5-4 victory that had been unthinkable just a half-hour earlier.

"I kind of scored that fluky one from outside the blue line to sort of give us life, and I think it was Troy who scored right after to tie it right back up," Francis said. 'Then all of a sudden, we get into overtime and I deflect one on the power play to give us the win."

That overtime goal capped not only the Penguins' comeback, but a hat trick for Francis. The only guy who figured out how to contain him all night was the teammate who tackled him in the left faceoff circle as Francis was celebrating the game-winner.

"Probably the most memorable thing was trying to get away from (Stevens) after I scored the overtime winner," he said. "I thought he was going to kill me."

Francis, of course, survived. And so did the Penguins, despite being without Mario Lemieux for the rest of the series and Joe Mullen for the balance of the playoffs because of the injuries they sustained in the Rangers series.

"Mario was such a huge part of our team, and Joey was such huge part of our team," Francis said. "When you lose guys like that, no individual replaces them. It takes everybody stepping up. I said back in the day that we had more guts than brains, because we didn't understand that we probably should have lost to the Presidents' Trophy winners when you lose those guys out of your lineup, but we still battled through it and found a way."

The dynamics of the series were inexorably altered when Francis' game-winner crossed the goal line. The momentum New York had generated with victories in Games 2 and 3 and had ridden through most of Game 4 vanished, replaced by the crush of a historical narrative that centered on the Rangers' inability to win a Stanley Cup since 1940.

"All of a sudden, the pressure went from us in that Game 4 to being all on their shoulders," Francis said. "Here's the Presidents' Trophy team playing against a team without Mario, without Mullen -- two of their top six guys -- and they can't put them away."

Instead, the Penguins did that to New York, earning a 3-2 victory at Madison Square Garden in Game 5 two nights later and locking up the series with a 5-1 victory at home 48 hours after that. They would go on to sweep Boston in the Wales final and Chicago in the Stanley Cup final to finish the playoffs with 11 consecutive victories.

And while getting past the Rangers truly was a team effort -- it had to be -- few contributed more than Francis, who believes that New York series encompassed most of his finest playoff work.

Perhaps the roots of what Francis accomplished in Game 4 against New York can be traced to Game 3, when he scored twice and had a typically strong two-way performance in a 6-5 overtime defeat.

"I remember driving home after that and talking to my dad," Francis said. "He didn't throw out the compliment very often, but I thought it was one of the best games I ever played in my life. He said, 'Yeah, I think you're right. You played an outstanding game.' And I said, 'And we lost. It wasn't enough. Now what do we do?' And he said, 'Now you have to do it again.' "