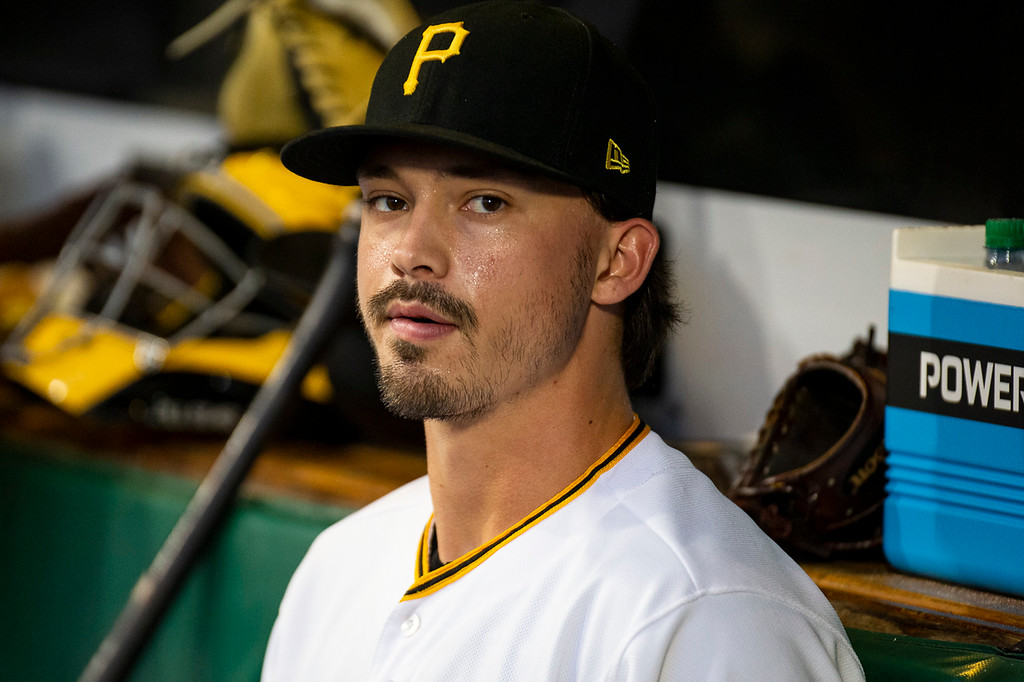 Bryan Reynolds, seated at his locker inside PNC Park, shrugs.

It's July 4, 2019, just past noon, and the Pirates are preparing to face the Cubs for the fourth and final game of their series, the Pirates carrying three consecutive wins in hand, including an 18-5 blowout in Game 1. That run moved them to 9-2 in their last 11 games, and it showed all over the players' faces pregame. When a clubhouse is winning, you can feel it immediately.

So, given that positive momentum and the holiday (the smoke rolling from Manny's BBQ behind center field carried a little extra spice for the 29,238 fans on hand, I swear it) I planned to patrol the clubhouse pregame and ask America's question:

Then, after the player makes his decision, I thought, I'd follow it up — journalism, yinz — by asking what toppings, specifically, comprise the perfect cookout treat.

I asked Reynolds first ... and I didn't need to ask anyone else. Perfection. Bag it up. My work here is done.

To understand Reynolds, you have to start with that demeanor. You gotta look to that ketchup-and-mustard response. I had to pull teeth to get the dude to go for cheese on his burger. Cheese, man.

It was a silly question, no doubt, but the answer said it all: Bryan Reynolds is not here to waste anyone's time. "Overthinking" is not a process he's programmed to execute. All problems — and thus all our questions — are simple to him.

May 3, 2019: Besides adjusting on the field, how have you adjusted to all this media *motions to the dozen phones and cameras swarming Reynolds*? How do you like that aspect of things?

"Uhh. *chuckles* I'm not a guy that's gonna strive to get in front of the camera every opportunity I get, but, you know, it's cool to get to do this [on] a little bit bigger stage than anything I've ever done, obviously, so, yeah. It's cool," Reynolds said.

Do any vets coach you to make sure this doesn't become a distraction?

"Not yet. I don't think I'll let it become a distraction. But, yeah. It's cool."

Aug. 16, 2019: How has the transition to the big leagues been for you? This is something you've thought about your whole life. Has it met expectations?

"Yeah, it's been awesome getting to live out a dream, but it's still baseball. Still the same game. So, as far as playing on the field, the talent is way up, obviously, but it's still the game I grew up playing, so that part of it is as familiar as it can be, and the rest I'm just taking in stride."

Cole Tucker, the Pirates' first-round pick in 2014 who got called up to the bigs alongside Reynolds, April 20, 2019, got just a little more animated when Reynolds' name came up that same day:

Sept. 9, 2019: Reynolds returns to San Francisco to face the Giants, the team that drafted him in the second round of the 2016 MLB Draft.

What was the visit like when you first came here with your fellow draftees in 2016? And how does it feel now that you're back here as a major-league player?

“It was cold,” Reynolds deadpanned.

I brought the topic up with Clint Hurdle next, and he had just a little more to say (watch the whole thing here, trust me):

Now watch it back with me.

The moment I mention "... to be back here, where it kind of all started for him," Hurdle lights up. And Hurdle lights up because he knows that's a big deal. The ninth overall pick in the 1975 MLB Draft, Hurdle understands what it means to get that opportunity to play at the MLB level. He's felt it. So when one of his young, budding stars has a chance to soak in that feeling and that moment a little, he perks up.

He answers my question — but turns the tables and fires a follow up of his own.

"I was kind of curious to hear what he had to say about coming back to San Francisco. So how was it, was there a level of excitement? It was good?"

Yeah, it was good, but in classic Bryan fashion. *laughs*

"He's special that way. And I don't anticipate a whole lot changing."

Not a whole lot changes with Reynolds, and that's by design. That's his mentality:

Bryan Reynolds told a story on the jumbotron about how he got kicked out of a game when he was five for mowing over the catcher at home.

Then he smacked a bases-clearing triple.

Dude is such a treat. #dkps #pirates

It wasn't just the demeanor, though. Reynolds is, as Hurdle put it, "special that way." That's a genuine take from a man who spent more time around Reynolds than any of us. It's all over everything Reynolds does. And beyond all that, there's a fantastic baseball player.

That kinda matters, too.

There's a slump there in the second half of Reynolds' season — but only by his standards and only on the efficiency scale. He hit more home runs and drove in more runs during the second half of his rookie campaign, but it came at a cost where his averages were concerned. Ultimately, Reynolds ended his 2019 season with a .314/.377/.503 slash line with 16 home runs and 68 RBIs in 491 at-bats. He remained in the NL batting title hunt throughout, giving Pirates fans something to track even as things crashed and burned en route to a 69-93 record.

“He’s lights-out,” Josh Bell was saying of Reynolds May 28 in Cincinnati. “I tell him all the time he’s a joke. He’s like a video game player. Both sides of the ball, playing defense, playing his tail off. Really fun to watch.”

"I think the hitter has exceeded our expectations this year," then-general-manager Neal Huntington said of Reynolds in late August. " ... We've seen him bounce from the corners and occasionally run into center field and just be a good baseball player, be a good teammate."

You might not agree with much of what Huntington says, but he nailed this one. Reynolds is a "good baseball player." Flat-out. In the field, in the batter's box, in the clubhouse, Reynolds showed everything and more one could expect from a first-year player.

Better yet, being flashy about it all doesn't matter to him (even if the flair kinda follows him anyway, as you can see above). Winning the batting title doesn't matter to him either, a point he stressed throughout the season, emphasizing that his teammates were keeping track of the race for him.

Now, the layer that makes things extra juicy: The most recent Pirates outfielders to flash this kind of potential and promise from the jump — Andrew McCutchen, Starling Marte and Gregory Polanco — all showed growth and development as early as Year 2.

McCutchen's stat line remained virtually unchanged, but Marte and Polanco each saw more action and were more efficient in Year 2. Players make that leap at the MLB level, knowing exactly what it takes to be a pro and understanding how they can adjust to major-league pitching and game planning.

The Pirates had one of the best rookies in baseball in 2019 with Reynolds — and there's literally no reason he can't be better in the future. He's showed no signs of slowing. His mentality was steady and consistent, even as the batting title conversation heated up and even as he became an increasingly appealing name and interview throughout that season.

None of it fazed him.

Reynolds is just a ketchup-and-mustard kinda guy, summoned to Pittsburgh to play baseball.

These numbers, these stats and these accolades are just pickles and onions — and those accessories have no place on Reynolds' plate.