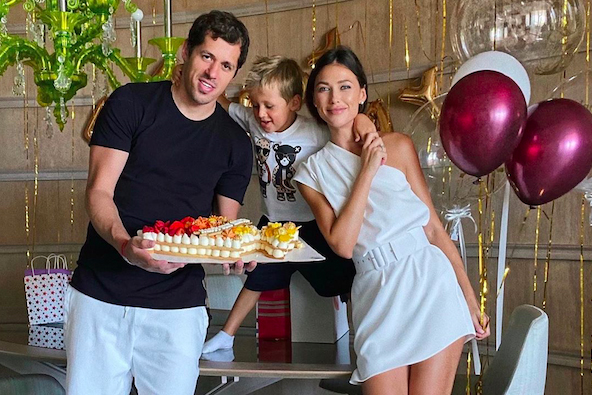 Evgeni Malkin's wife Anna Kasterova joined Russian newspaper Sport-Express for a lengthy video chat this week, where she spoke about what she and Malkin have been doing during the NHL's shutdown, Malkin's career, his future, and more.

Malkin, Kasterova, and their four-year-old son Nikita have been spending the shutdown in Miami. Kasterova said that she became sick in April and that their whole family was tested for coronavirus as a result. All three tested negative for both coronavirus and its antibodies.

Kasterova said that Malkin has stayed in shape by running and swimming, and that he's been able to skate in Florida during the shutdown. He's also changed his diet this year, cutting out potatoes and gluten, and eating fewer sweets.

"He doesn’t eat potatoes at all," Kasterova said. "This is more of a problem for me. ... Without potatoes it’s difficult to cook. If housewives read this, they will understand me. He even began to eat less sweets, cut out gluten. Even the recommended quick carbohydrates before the game — for example, pasta — are made from gluten-free pasta."

Malkin's kept himself busy out of the gym and away from the rink, too. Kasterova said that Malkin hired an English tutor to work on his grammar, and a Russian literature tutor, studying five days a week. He's been watching television in English but reading books in Russian, and is currently reading "Quantum Warrior: The Future of the Mind" by author John Kehoe. According to the Amazon description, the book "combines the most up-to-date scientific discoveries with mystical teachings from our major religions to create a vision of the quantum warrior and the possibilities of our future as a species."

The host asked Kasterova if they have any plans to catch up to Alex Ovechkin and his wife Anastasia, after Anastasia gave birth to the couple's second son Ilya last week. Kasterova said that they want a second child, and that she wants a girl.

Kasterova was asked about Malkin's relationship with Sidney Crosby.

“I can talk about it endlessly," she said. "This is a unique situation. But there is also healthy competition here. Plus a powerful interchange. When Sid gets injured, Evgeni becomes number one, leads the team. And vice versa. Outside of hockey, they are also good friends, sincerely supporting each other.

"Have I ever wondered what would happen if (Malkin) were in the team alone? Probably, he would be number one in the whole world hockey, given his talent, intellect and multilateral game. ... When Sid was injured and missed more than a month, Evgeni took the lead in his own hands — how his statistics improved. Pittsburgh almost never lost at that time. It was the highest level hockey, which proves once again that he is top."

Kasterova said that Malkin is happy in his role in Pittsburgh.

"(Malkin) has spent many years in Pittsburgh and knows everything here," she said. "He and Crosby are two No. 1s. Together they won three Cups. No one says Sid is less talented. He is just a giant in hockey. Plus, if (Malkin) consulted with me, asked if I would like to move to one of the most beautiful cities, where he will lead the team, I probably would say no. If he wins a fourth Cup, it will happen in Pittsburgh. A good manager, coach and team atmosphere are very important. Pittsburgh has it all. They love him there, and he [does] too."

Kasterova said that Malkin's first priority is to win a fourth Stanley Cup, but that he also hopes to win Olympic gold one day, and hopes that NHL players will be allowed to play in the 2022 Beijing Olympics.

"It was decided that the players would not participate in the (2018) Olympics," she recalled. "I saw how upset and depressed he was — he lost the opportunity to win Olympic gold. But he is a man of discipline. Evgeni always respects all decisions from the NHL. Does he want to win the Olympics? Yes, of course — who doesn't want to?"

Kasterova said that she expects Malkin to one day return to Metallurg Magnitogorsk in the KHL for the final season of his career.

"It would be right," she said, if Malkin ended his career with his hometown team.