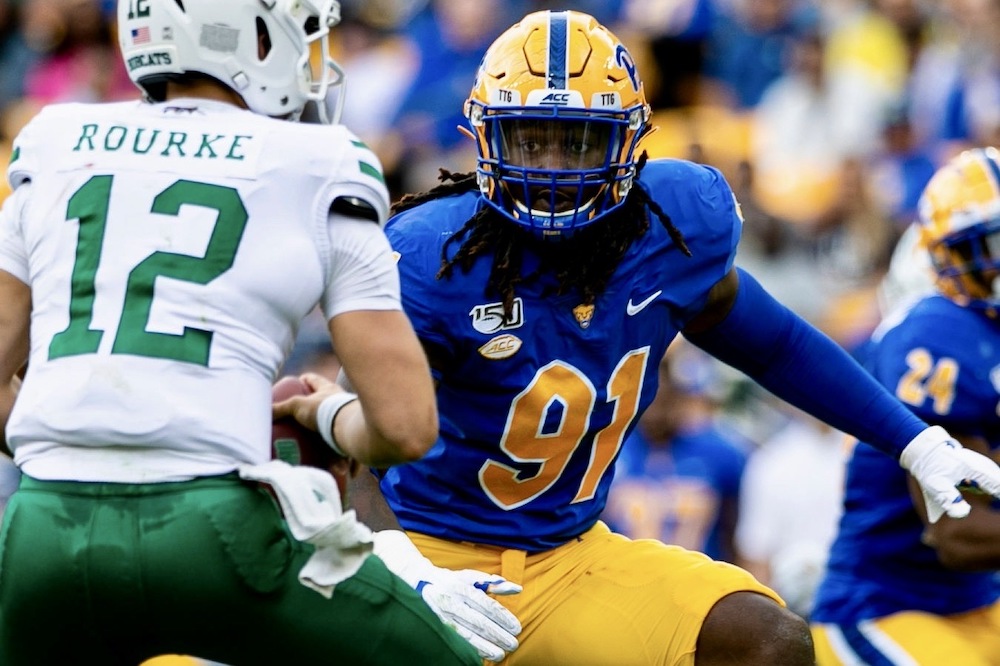 When Rashad Weaver suffered a right ACL tear during an August practice and was lost for the 2019 season, the news was considered a potential death knell for the Pitt defense.

Weaver arguably was the Panthers' top defender the year before, as the 6-foot-5, 270-pound defensive end from Fort Lauderdale, Florida, finished with 14 tackles for loss, six-and-a-half sacks, three fumble recoveries and 16 run stuffs. Things then took a darker turn along Pitt's defensive front when Keyshon Camp was lost for the season with a knee injury in the opener against Virginia.

While Jaylen Twyman emerged in Camp's absence and worked his way to second-team All-America honors, Patrick Jones II provided Pitt with consistent and often spectacular play in his first season as a full-time starter at defensive end. During a breakout junior season, Jones had 18 quarterback hurries, 12 tackles for loss, eight-and-a-half sacks and four forced fumbles. He earned second-team all-ACC honors.

With the help of Jones, Pitt's defensive front went from uncertainty following that season-opening loss to Virginia to one of the more productive units in college football. The Panthers averaged 3.92 sacks per game, which was tied with SMU for most in the nation.

Yep, good luck finding a pair of players who improved their professional playing stock more last season than Jones and Twyman. Last month, a CBS Sports mock draft had Jones going No. 9 overall to the Atlanta Falcons, making him the third defensive player off the board. Others have him listed as a potential first- or second-round pick

If those type of projections hold true and Pitt's defense -- boosted by the returns of Weaver and Camp -- plays at a level higher or similar to last season, Jones' decision to bypass the NFL Draft will be a good one.

"Me personally, I wasn't thinking like I was going to leave for the NFL," Jones said last month during a video conference call with reporters. "(Last year) it was my first year starting. So it never really crossed my mind 'til I started talking to people about the opportunity, but it never really was a thought in my head because I know I've got so much more to improve on."

Talk about a scary thought for opponents.

Jones, one of 42 athletes named earlier this week to the Lott IMPACT Trophy watch list given to the defensive player who best combines performance and character, on the field combines size, speed, strength and athleticism. He displays quickness coming off the edge, chase-down speed and a willingness to defend the run. It's a package that helped him turn in dominating performances last season.

And speaking of athleticism, check this out:

Hard to believe Jones was a two-star recruit out of Chesapeake, Virginia, which is an area Pitt's coaching staff is recruiting heavily.

Then again, so was Houston Texans' star J.J. Watt, who spoke with members of the Pitt football team on a video conference call last month. Jones paid close attention.

"I did a lot of research on J.J. Watt coming out of high school because we were both two-star recruits," Jones said. "So I wanted to look at somebody who has been in my position, somebody who made it to the top of my position. So I've been looking at J.J. Watt for a long time. So I just asked him questions like about how he developed his body with nutrition and stuff like that."

As for offseason work, Jones mostly spent the past couple of months working out alone or in a small group, occasionally including Twyman, because of the coronavirus pandemic.

Jones' sister, Mia, who lives and works in Atlanta, contracted the virus and recovered.

“It was kind of messed up because they didn’t take her (at first). They only took people that were critical, almost near death,” Jones said.  “My sister’s symptoms were pretty severe, and she couldn’t even get a test until it was almost to one of the worst points. Thankfully, she was blessed, and God was watching over her and pulled through it.”

Despite the closeness of the coronavirus impact, Jones has no hesitations about returning to more formal workouts at Pitt. The process begins Monday when players begin a phased return to activities that starts with a period of quarantine before groups of up to 10 are allowed to work out.