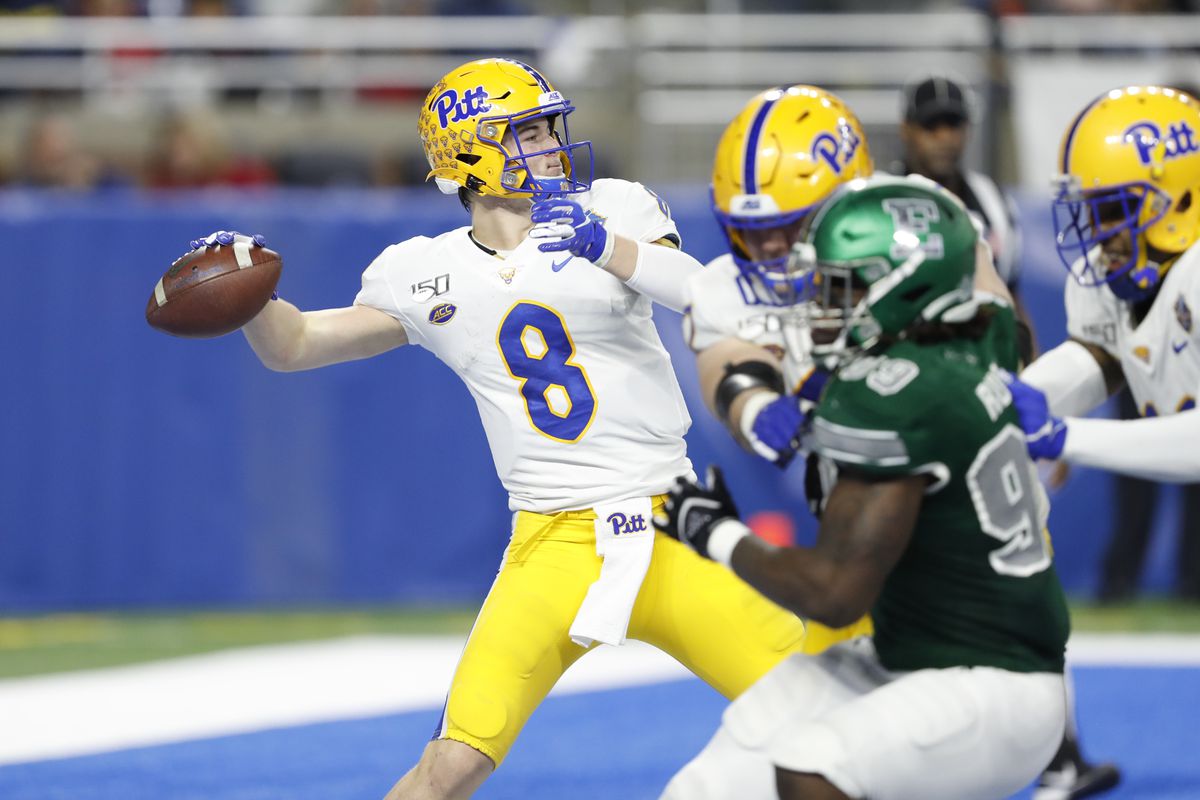 This is the first in a weekly series ranking starters or starting position groups in the ACC.

Kenny Pickett's first impression was a memorable one.

Pitt, sporting a 4-7 record heading into a 2017 home game against No. 2 Miami, turned to Pickett, then a freshman, as its starting quarterback.

The results were extraordinary despite Pickett's pedestrian statistics. He threw for 193 yards and a touchdown, and he rushed for another as the Panthers pulled off a 24-14 upset.

The win created expectations. Pickett didn't exactly live up to them as a sophomore, though Pitt's run-heavy offense was good enough to win a mediocre Coastal Division and earn a spot in the ACC championship game.

Pickett, who received an invitation to the Archie Manning Quarterback Camp last summer, showed progress in 2019 under first-year offensive coordinator Mark Whipple. He's even considered a candidate for the Senior Bowl.

Some QB prospects we’ve already studied for 2021 @seniorbowl. It’s early but we know you guys are ready for it.#TheDraftStartsInMOBILE pic.twitter.com/wwOwKY25EG

But where does Pickett rank among his ACC peers? Let's take a look. 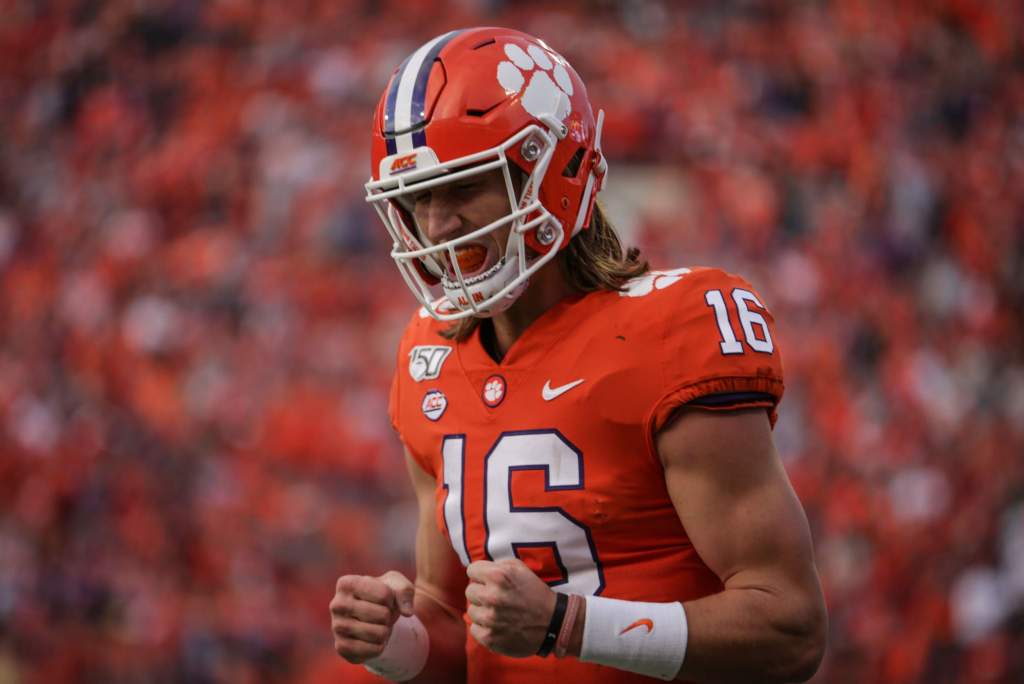 Talk about a no-brainer.

Already one of the great winners in college football history, Lawrence has all the tools, which is why many believe he's destined to be the No.1 pick in next year's NFL Draft.

Lawrence is the complete package of size (6-foot-6, 200 pounds), accuracy, arm strength and mobility. He's thrown 66 touchdowns and for 6,945 yards in only two seasons. As a freshman, Lawrence helped Clemson win the national title. The Tigers were runners-up last season.

The only thing missing from Lawrence's resume is a Heisman Trophy.

It's hard to top what Howell did as a freshman. In fact, in ACC history, only Deshaun Watson and Jameis Winston threw more touchdowns in a single season than Howell's 38 in 2019.

He's got the arm strength, as evidenced by a FBS-leading six touchdown passes last season with a throw of 40 yards or more. About the only knock on Howell is his play under pressure. Expect that to improve with experience.

Howell is the reason North Carolina is a trendy pick to win the ACC Coastal.

The Hurricanes' offense got an instant upgrade when the former Houston quarterback, who played wide receiver early in his collegiate career, chose Miami as his landing spot.

There's no doubting King's athleticism, but he hasn't played much since suffering a torn meniscus in 2018. At the time of his injury, the former Cougars standout had 50 total touchdowns (14 rushing). He then redshirted after Houston started last season 1-3, but he passed for 663 yards, rushed for 312 and accounted for 12 touchdowns in those four games.

Yes, Notre Dame is not an ACC member in football, but it does play six conference teams, including Oct. 17 at Pitt, so the Fighting Irish make the cut.

As for Book, if these rankings were strictly based on won-loss record, he would rate a couple of spots higher.  Yet, despite a 20-3 career record, eye-pleasing stats and an appearance in the College Football Playoff two years ago, he doesn't move the excitement needle much.

But check out these stats: 6,118 career passing yards, 57 touchdowns and 1,032 rushing yards. Topping last season's 33 touchdowns could be a chore without Chase Claypool, the Steelers' second-round pick.

If you said, "Micale who?" That's fair. Cunningham went by his middle name Malik before changing midway through last season, but there's no mistaking ACC defenses are aware of his playmaking abilities.

In his second full season as a starter, Pickett threw 469 passes (289 completions) for 3,098 yards, the fourth best single-season passing total in Pitt history. His 24.1 completions per game led the ACC, but 13 touchdown passes prove the Panthers didn't make enough big plays in the passing game.

Pickett deserved some of the blame. His downfield accuracy needs work. His receivers also need to drop fewer passes.

Jurkovec, a Pine-Richland High School product and the most heavily recruited quarterback from Western Pennsylvania since Terrelle Pryor, is a wild card mostly because the former Notre Dame backup is awaiting approval on an NCAA waiver to play this season for the Eagles.

Let's assume Jurkovec gets approved. If so, Boston College likely has its starting quarterback for the next three seasons and an upgrade over Dennis Grosel.

The Hokies, much like North Carolina, are a trendy pick in the Coastal Division, and the play of Hooker is a big reason for Virginia Tech's popularity.

The 6-4 Hooker provided plays with his arm (13 TDs, two interceptions in eight starts) and legs (five rushing TDs) in leading Virginia Tech to a 6-2 record as a starter. He went 124 pass attempts without an interception.

Hartman was the Demon Deacons starter and passed for 16 touchdowns as a freshman before an injury derailed his progress. Jamie Newman, who transferred to Georgia, took over as starter after Newman went down and did not relinquish the job.

Now, Hartman is back under center for Wake Forest, giving the team some much-needed experience.

When Blackman is on, he's one of the best in the conference. For Florida State, the problem is Blackman isn't always on.

Blackman's 41 touchdown passes, 390 completions and 5,079 passing yards are solid numbers, but the 6-5, 195-pound senior is learning his fourth offensive system. Mike Norvell, who was part of Todd Graham's 2011 staff at Pitt, is Florida State's new coach.

Norvell isn't the only Pitt connection to the Seminoles' quarterbacks group. Former Wisconsin starter Alex Hornibrook committed to Pitt while Paul Chryst was head coach but switched to the Badgers when Chryst left for Madison. Hornibrook isn't spectacular, but he could push for playing time.

A redshirt sophomore, Armstrong has attempted 20 career passes -- he completed 15 -- but spent the past two years as an understudy to Bryce Perkins, who led the Cavaliers to the ACC championship game and an Orange Bowl appearance last season.

Armstrong is unproven, but Virginia returns every starter on the offensive line. That should afford him time to gain confidence.

The Clemson transfer has two years of eligibility remaining, but if he lives up to the hype he had before backing up Lawrence, his stay in Durham, North Carolina, might not last long.

Brice completed 82 of 136 passes for 1,023 yards with nine touchdowns and four interceptions at Clemson.

Improved play on the offensive line could be key for Devito, who was sacked 43 times last season.

In his first season as a starter, Devito passed for 2,360 yards and 19 touchdowns. He did not throw an interception in the Orange's final six games despite facing consistent pressure.

Graham has a strong arm and is a good runner but accuracy is an issue. He completed just 87 of 193 passes (45.1 percent).

Leary became the first redshirt freshman to start at quarterback for the Wolfpack since Russell Wilson in 2010. The comparisons end there.

He completed 101 of 201 attempts for 1,219 yards, nine touchdowns and five interceptions.