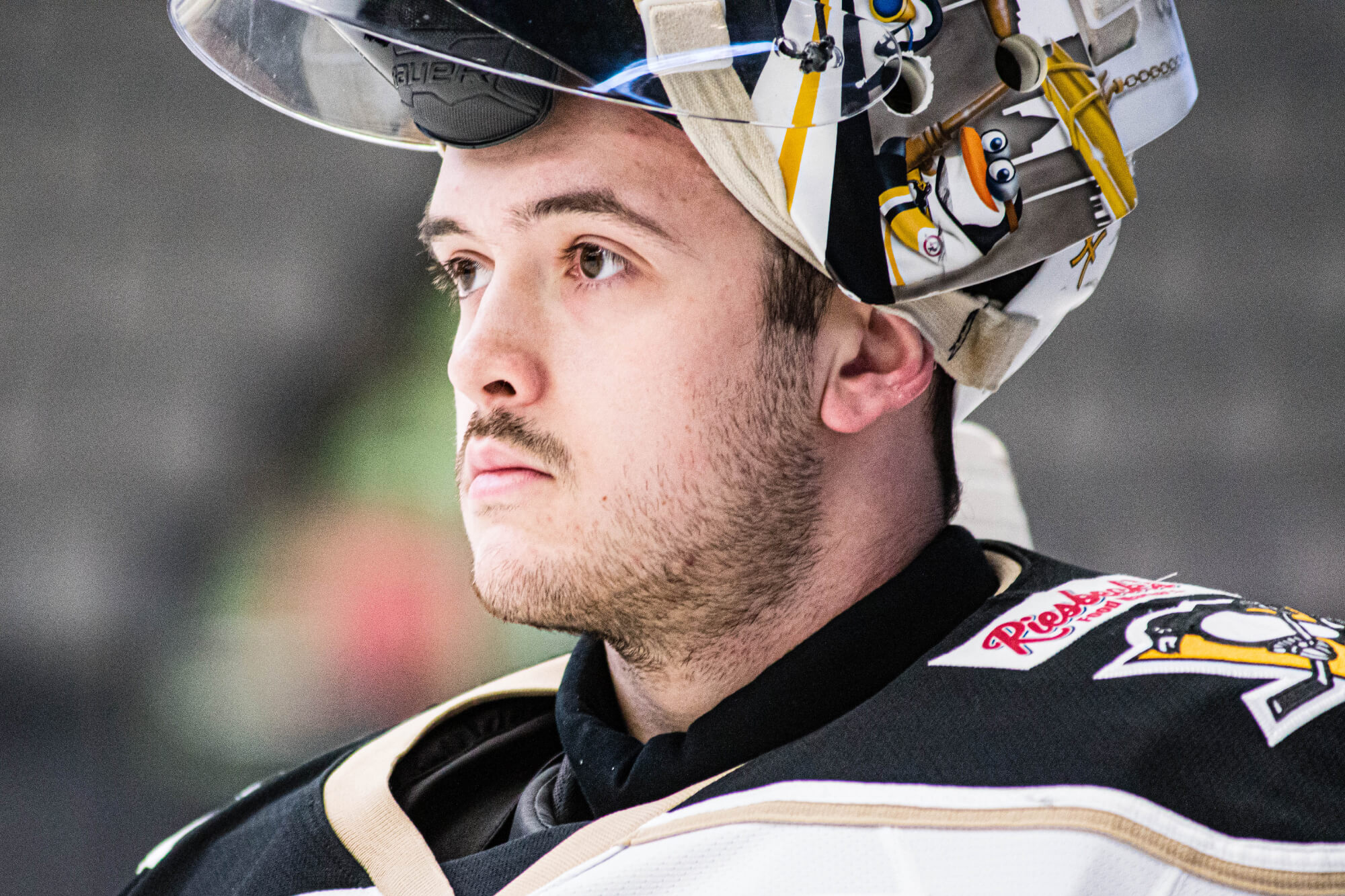 Thursday marks a full month since the Penguins reopened the UPMC Lemieux Complex to players for informal skates as part of Phase 2 of the NHL's return-to-play plan.

Players from the NHL roster as well as some prospects have been trickling back into town over the last month or so, and the informal skates now have a full attendance.

One player who has been in Pittsburgh since the day the doors of the facility reopened a month ago is 21-year-old goaltending prospect Alex D'Orio, who is looking to be one of the extra goaltenders on the Penguins' expanded playoff roster if the season reopens next month.

D'Orio, who played in his first professional season this year, said the Penguins called him about a week before the start of the informal skates and asked if he would be able to get to Pittsburgh, and he jumped at the opportunity.

"For me, it was a no-brainer, especially at that time," D'Orio told me this week. "In Quebec we didn't have any ice that was open. For me, it was a good way to start going back on the ice and keep getting ready for the playoffs or next season. Even at the beginning, a lot of people were already on the ice. That was nice. We're practicing, going in the gym, and getting ready for what's going to happen." 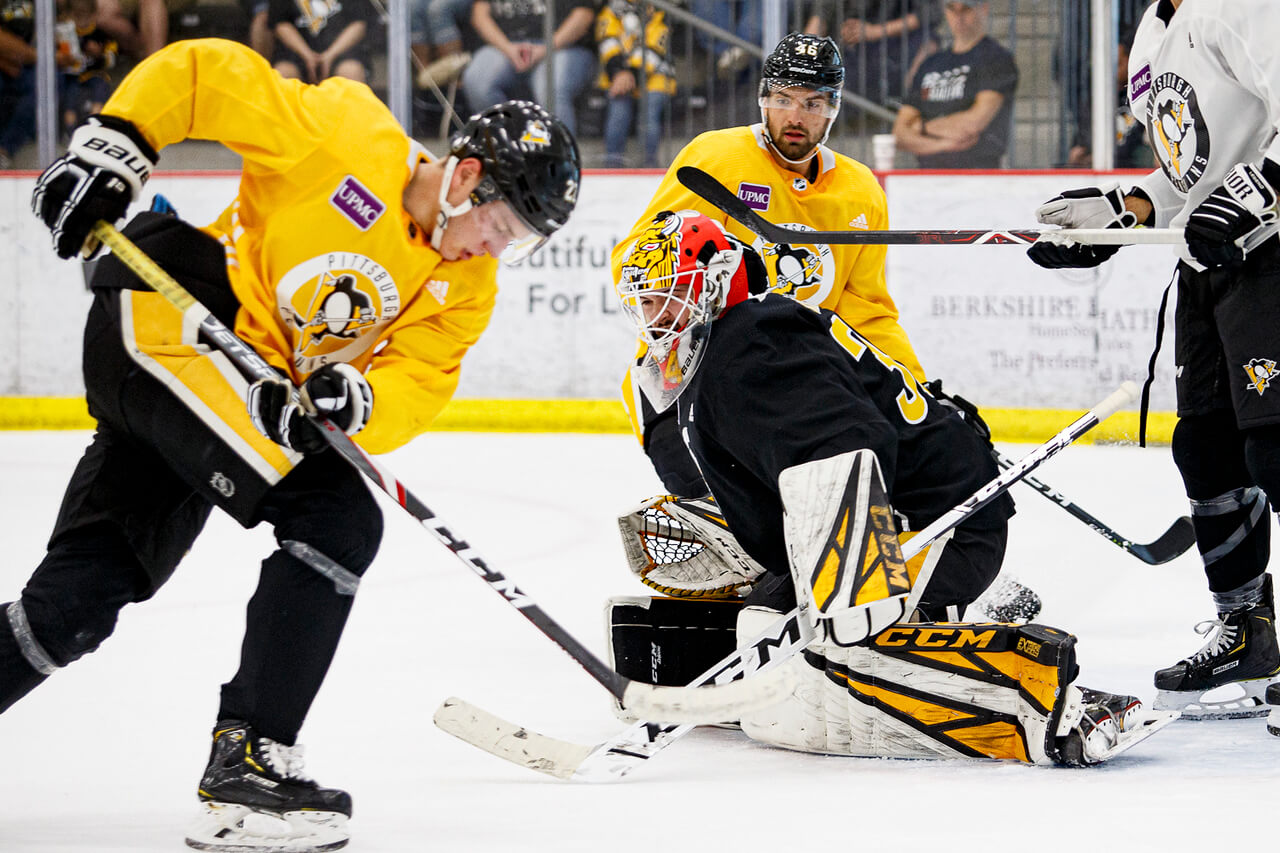 For the last two weeks Penguins players have been skating in groups of up to 12 players. D'Orio has been skating in a group with other Black Ace players, including top forward prospect Samuel Poulin and top defense prospect Pierre-Olivier Joseph. For the first two weeks of the skates, when sessions were limited to just six players, D'Orio skated in a group with Sam Lafferty, Anthony Angello, Zach Trotman, Jared McCann, and Chad Ruhwedel, all players who saw NHL time this season.

"It's helping a lot to have a great quality of shooters," D'Orio said of the opportunity. "For me to be around those guys for a month was huge for my development and the way that I want to get ready for what's coming."

While D'Orio wasn't able to be on the ice in Quebec leading up to the informal skates, he was still putting in work. He was able to work out four times a week in his trainer's gym, and had weekly virtual meetings with goaltending development coach Andy Chiodo to study game film from this season, and go over what D'Orio needs to do to get ready for next season.

With the number of goaltenders in the minors -- Casey DeSmith, Dustin Tokarski, Emil Larmi, and D'Orio --  D'Orio spent the entire season in the ECHL with the Nailers. When I spoke to him in September during Pittsburgh's training camp, he said that the prospect of playing his first professional season in Wheeling wasn't something he was worried about.

"I know for goalies it’s not the same thing as other players," he told me during camp. "Just in this organization with Casey DeSmith, he started in the East Coast, and look at where he is right now. I just want to go play hockey.”

D'Orio appeared in 31 games for a Nailers team that was one of the weakest teams in the league defensively and was depleted by call ups for much of the season. He posted a 12-15-2 record, a 3.43 goals against average, and an .892 save percentage.

"Except for the (shutdown) I think I'm very happy about my first season," D'Orio said of his rookie year. "It was a big learning season for me for how to be a pro. I got a lot of games in Wheeling. Overall, I'm pretty happy that I had a chance to play, especially in Wheeling. They gave me a lot of time for my rookie season."

When I spoke to D'Orio a month into the season, he said that the speed of the professional game was the biggest adjustment coming from junior hockey.

"The play is faster, the players are better, the shots are stronger," he said. "The players can make plays way more easily, and there’s less chance for them to miss a play. I think for a goalie it’s a big difference to be out right every time to be ready to receive a shot, or a play that the other team is making."

Chiodo made several trips to Wheeling throughout the season to work with D'Orio, and the two spoke on almost a daily basis. Even when Chiodo was in Wilkes-Barre, he was able to watch all of D'Orio's game film, and go over it with D'Orio virtually.

D'Orio also benefitted from his relationship with his goaltending partner in Wheeling, 29-year-old Jordan Ruby.

"I had a great relationship with Jordan," D'Orio said. "It was great to have a guy like him around me for my rookie season. He knows the drill, what's going on in pros. To have him around me helping me mentally, even giving me ideas of what to work on during the season technically on the ice, we were a great duo."

When I spoke with Ruby back in December, he told me about how impressed he was with the way D'Orio carried himself and acted like a professional at his age.

“He’s a humble guy,” Ruby said of D'Orio. “He doesn’t really talk about himself. He knows he’s under an NHL contract, but he comes in, wants to work, and just kind of keeps to himself. On the ice, simple things. If he gets scored on in practice, he says, 'Nice shot!' to them. That just shows you right there, that says a lot for a goalie. He’s a great teammate. I just try to encourage and help him as much as I can."

Just as with last summer's training camp, D'Orio said he isn't thinking too far ahead to next season, noting that "we don't even know what's going to happen in the next few weeks."

Whenever the 2020-21 season does end up happening, D'Orio will just look to come into camp and show that he's ready to take the next step.

"I'm just trying to get ready to be in the best shape I can be, so I can make sure in training camp I can prove that I can be in the AHL."