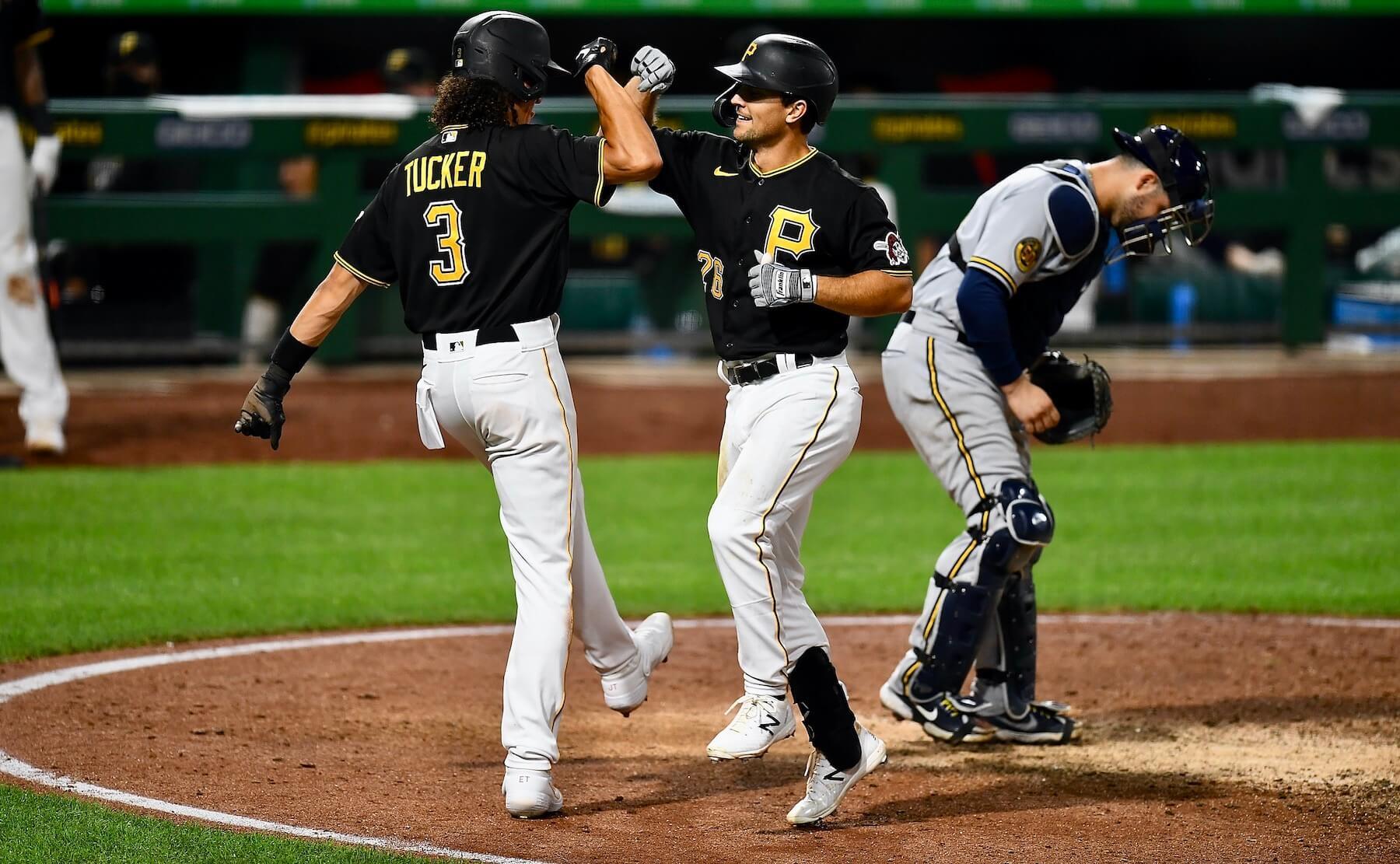 On Monday, the Pirates blew a four run lead in the ninth and lost in extra-innings to the Brewers. Such a loss could have carried over to the next day, if not the whole series.

On Tuesday, the Pirates returned the favor, erasing a four run deficit in the seventh before Adam Frazier went yard in the eighth to beat the Brewers at PNC Park, 8-6.

"Really proud of our group," Derek Shelton said during his opening remarks. "Resilient in coming back. I think that's the one thing our fans are going to learn about this group is they don't give up. They haven't. We've clawed back in every single game. Extremely resilient. Really fun night for our group. Monday night was a tough night. Our staff and players bounced back."

That bounceback started as soon as they got into the clubhouse after Monday's game.

"When everybody came into the clubhouse, we made sure that they know that, hey, you know what, we fought," Derek Holland said. "Unfortunately, we didn’t get the win. We did everything we could. Let’s keep that momentum, use that in today’s game, and I thought the guys did a great job of that."

It was a night of redemption not just for the team as a whole, but several of the Pirates' hitters, because while the bullpen took most of the blame for blowing the late lead, they failed to get the big hit and plate the runner in scoring position in the 10th and 11th.

Like most of the Pirates' lineup, Frazier has struggled out of the gate, but he squared up a center-cut Bobby Wahl fastball with the game on the line:

When asked if he knew he had it off the bat, Frazier responded, "Honestly, no."

"First ball I’ve driven all year," Frazier said. "I kind of forgot what it felt like. It felt pretty good.”

But Frazier almost didn't have a chance to play the hero after the bullpen struggled again the inning prior.

Entering the seventh tied 2-2, Chris Stratton and Miguel Del Pozo were erratic, combining to walk five of the first six batters of the inning, with an Orlando Arcia double sandwiched in between.

Shelton then turned to Geoff Hartlieb, who was recalled from the Altoona alternate camp shortly before the game after Kyle Crick and Clay Holmes were placed on the injured list, with the bases loaded and nobody out. He rose to the challenge, pitching two innings while only allowing one inherited runner to score on a sacrifice fly, though he was the beneficiary of two outfield assists.

The first was from Guillermo Heredia in the seventh:

The second came from Bryan Reynolds in the eighth to gun down Ryan Braun at home and keep the game tied:

"I'd say it's one of my better ones up here [in the majors]," Reynolds said about the throw.

The two outfielders also had the bats going. Heredia drove in the first two runs of the game on a bases loaded single in the fourth, and Reynolds went 2-for-4 with a run and a stolen base.

Both players were hitless entering the game. That was quite surprising of Reynolds, who was a model of efficiency during his rookie year of 2019.

Shelton wasn't worried his left fielder's slow start, saying before the game that, "Reynolds is going to be fine. He's going to hit. Not worried about it in the least bit."

And what was going on in Reynolds' head?

"Yeah, I was sweating it, but I still trusted that I would get another hit at some point," Reynolds said.

The Pirates quickly loaded the bases in the home half of the seventh and caught a break when first baseman Justin Smoak airmailed a potential inning-ending double-play into left field, bringing the Pirates' back within one. Phillip Evans later knotted the game up with two outs, beating the tag at second for a hustle double.

"They play hard," Shelton said. "You watch guys down the line, they're busting their ass. There's a lot of good things that happened, and it showed up tonight. It showed up late."

That set the stage for Frazier, and eventually Nick Burdi, who got a strikeout and induced a double-play in the ninth for his first major-league save.

"This is one of those moments where, you know, it’s been six years in the making," Burdi said. "Three surgeries later, finally got the first one. So it was definitely exciting.”

Speaking of firsts, Hartlieb earned his first career win for his two innings.

"To see guys get their first win, first save, first strikeout, any of the firsts, I think it’s one of the coolest things," Holland said. "... We’re going to have a lot of young guys doing these things and we’ve got to continue to keep that momentum, keep those guys feeling good about themselves, keep that confidence there, let them know that we’re there for them."

He was in and out of the zone all night, walking three and hitting a batter, but he finished with only two hits on his ledger. The second was a two-run homer to Keston Hiura in the sixth, his lone blemish of the night.

"I’m a big guy on walks, and I felt like the walks that did happen were competitive walks," Holland said. "Overall, I thought we did a good job of working in and out, up and down, changing guys’ eye level and attacking."

After losing by one run in two of their first four games of the season, partially because of questionable bullpen work as a team, the Pirates aren't underselling the importance of Tuesday's win, especially as they try to navigate one of the toughest early season schedules in baseball.

"This is a big win for us," Reynolds said. "Last night was tough, but that's baseball. We bounced back well and put together a good, solid game. Frazier picked us up there. Good momentum swing for us."