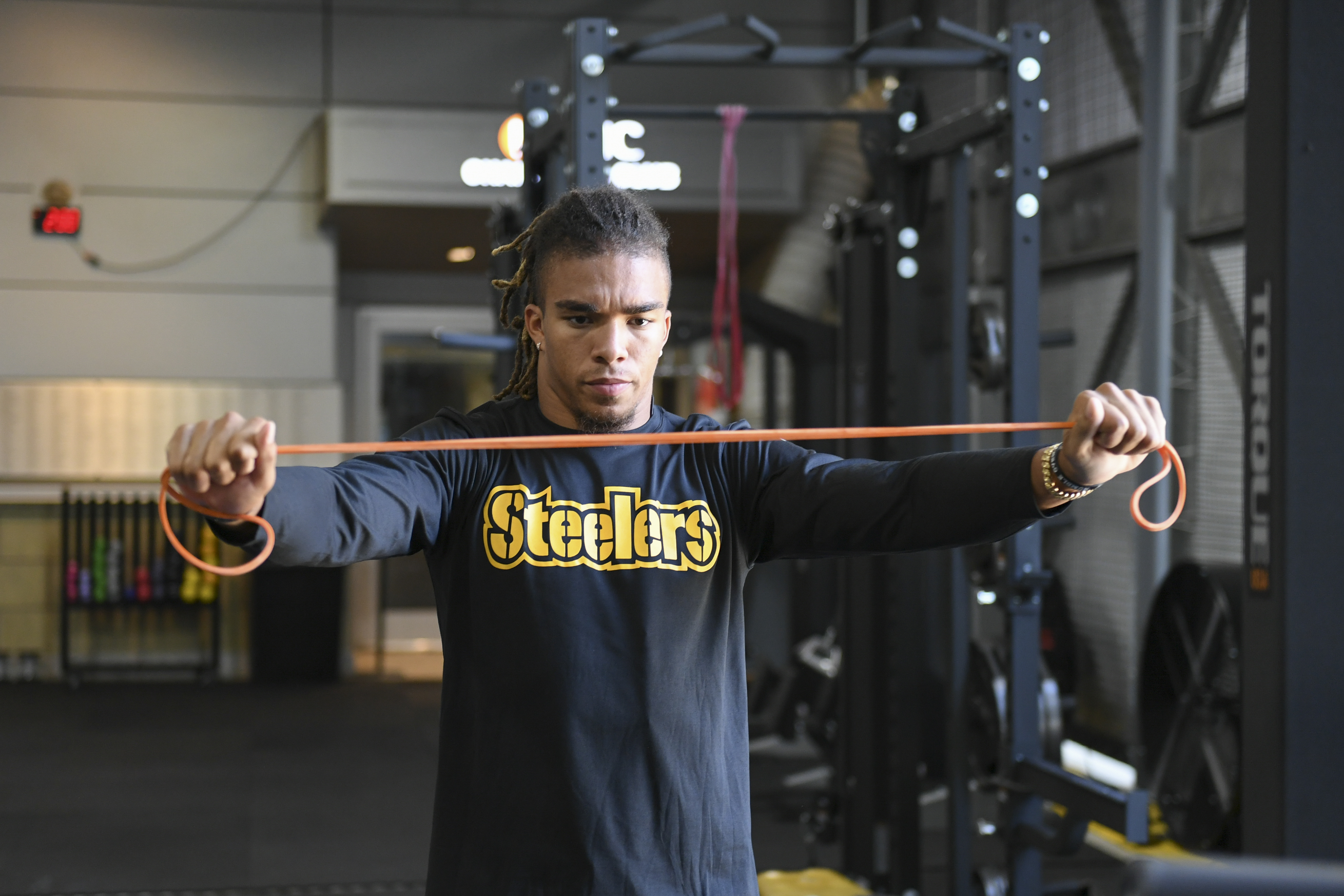 There aren't many open spots on the Steelers' offense. The team returns 10 offensive starters from a year ago, including getting quarterback Ben Roethlisberger back following an elbow injury that limited him to six quarters of play.

But that doesn't mean offensive coordinator Randy Fichtner doesn't plan on some spots being contested once the Steelers finally take the practice field. His optimism about what the Steelers offense can be extends beyond just the fact Roethlisberger is back.

Though the Steelers only have 14 padded practices -- beginning Aug. 17 -- before they play their regular season opening Sept. 14 against the Giants at MetLife Stadium. That won't leave a lot of time for any "battles" to take place, especially since there will be no preseason games played.

But Fichtner isn't ready to call any of them before they start.

Matt Feiler will get the first opportunity to replace retired Ramon Foster at left guard. That means Chuks Okorafor and Zach Banner will compete for the starting right tackle job held down by Feiler the past two years.

Waiting in the wings is 10-year veteran guard Stefen Wisniewski, signed in the offseason as a free agent from the Chiefs.

There are options. But Fichtner also acknowledges the lack of practices could make these camp battles more skirmishes than full-blown competitions. There won't be time for much more.

"I think anything is possible for sure," Fichtner said. "I think you would just like to know, you want to give the best opportunity for us to move in this kind of time period given the reps. I think it’s just the prudent thing to do."

Chances are, unless Okorafor and Banner show they can't handle the right tackle position, Feiler will be at guard and one of the two young tackles will be in the starting lineup.

"I do know, Matt is very intelligent. Matt is very physical," Fichtner said. "Matt had a, in my opinion, a hell of a football season last year. He’s going to be successful whether he’s inside or out, and if he puts himself in a position that we feel comfortable maybe with one of those younger or (Wisniewski), one of those younger or experienced guards, we have to play the best five. And, we have to figure that out quickly enough."

The younger guards to whom Fichtner refers are Derwin Gray, a seventh-round pick in 2019, and Kevin Dotson, a fourth-round pick this year.

Those two will get opportunities. But, as it will be with most of the team's young players this season, it will be tough to crack the lineup -- especially early.

"When you’re really talking about where they can help you, I’m rooting that they can help us immediately right out of it all, but I’ll be honest, I’m not counting on it," Fichtner said. "I don’t think it cool to do that."

The same goes for second-round pick Chase Claypool, a wide receiver. But the Steelers have more depth there with JuJu Smith-Schuster, Diontae Johnson and James Washington returning.

Anything the Steelers get out of Claypool this season will be a bonus.

One other new player on whom Fichtner will be counting will be tight end Eric Ebron. The veteran tight end was signed in the offseason to a 2-year, $12-million contract to help beef up the team's play at the position.

Two years ago, the Steelers set team records for tight end production in both receptions and yardage. Last season, with starter Vance McDonald banged up and no real second option, that production was less than half what it had been the year before.

The Steelers now have a pair of tight ends with starting experience. But, like McDonald, Ebron has struggled with some injuries. Still, he was in the Pro Bowl two years ago when he caught 13 touchdown passes for the Colts.

"Availability is always the biggest issue when you play that really tough position," Fichtner said. "You have to play it somewhat like a race car. But you have to be able to be a Ford truck, too. They play in a world that is very physical and their availability will allow us to utilize two tight ends, if not more, and that will be awesome. I always feel comfortable when I have two tight ends, dependable, that can equally be good in the pass and the run. And again, I like Eric, I like everything about him. I haven’t had the chance to meet him, but just the virtual and that type of thing has been really good."

The new pieces are fine. But the Steelers offense likely will revolve around the production it gets out of known commodities.

It can't have Roethlisberger limited to two games, running back James Conner play just six quarters are he did in the final eight games of last season, or JuJu Smith-Schuster hampered by injuries as he was a year ago by concussion and knee issues.

Conner and Smith-Schuster both are headed into the final season of their rookie contracts. Both were Pro Bowl players in 2018. Neither played at anywhere near that level in 2019.

"I realize the injury might have kept them from certain things, but the truth is, they have a lot to give," Fichtner said. "It’s been out there before. They’ve seen it. They’ve done it. They’re been there, done that guys. Both have been to the Pro Bowl. Both of them had outstanding years the year prior. It can happen again, and it will. I think there’s a lot of positivity right now. I think they’re committed to doing all the right things to put themselves in position to be better this season."