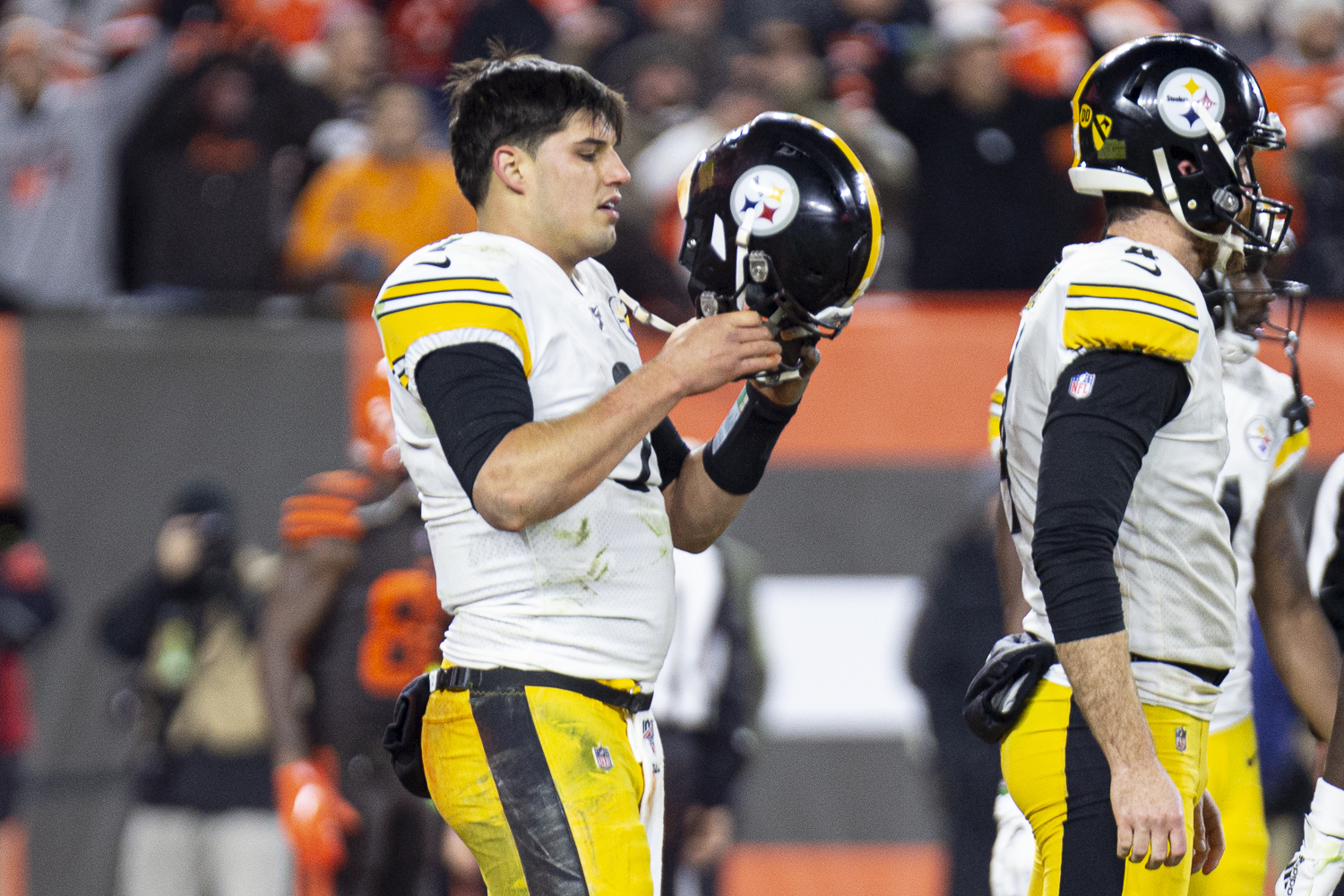 [theme-my-login show_title=0]
Mason Rudolph walks off the field during the Steelers' 21-7 loss to the Browns in Cleveland. – MATT SUNDAY / DKPS
Share
Tweet
Email

The Browns thumped the Steelers, 21-7, in Cleveland Thursday night — but little of the post-game chatter focused on the game itself.

Instead, it centered around this, a late brawl sparked when Myles Garrett tackled Mason Rudolph late and then … Well, just watch:

The players in the game shared their thoughts.

“I know we play a sport that’s violent, but the dude’s defenseless when it comes to that,” Cam Heyward said. “If you want to set it up, set it up, but it never got to that point, man.”

“Of course that’s not who we want to be at the end of the game,” Browns head coach Freddie Kitchens said.

“It’s inexcusable. I don’t care, rivalry or not, we can’t do that,” Baker Mayfield said on the field after the game. “ … That’s just endangering the other team. That’s inexcusable. He knows that — [or] I hope he does now.”

And their peers — past and present — lost their collective minds, too.

That’s assault at the least... 6 months in jail on the street.. now add the weapon and that’s at least a year right?!

Honestly, the worst shit I’ve ever seen. Worse than anything Burfict ever did

If Myles had just took his helmet off and threw it or dropped it, I would have no qualms. Mason started it. But Myles took it to the next unacceptable level. Forget player conduct. He violated the rules of brotherhood of the league with that swing!

Listen people. If he had caught Mason Rudolph the right way, he could have killed him or hurt him very very badly. F that. This is serious.

Myles Garrett- Can’t swing his helmet, ever, that’s the obvious.

Mason, don’t try to rip a grown mans helmet off then charge him helmetless, this ain’t no frat party... you think Myles Garrett just wanted to talk?

*This is not a defense, this is stating the obvious!

Others stood up for the Steelers' Maurkice Pouncey, who retaliated with a series of punches and a kick to a downed Garrett after the helmet-swinging incident.

I fu**ing love this Oline! Regardless of what anyone else thinks!

F Dat! @MaurkicePouncey you gotta do what you gotta do. If they hit Lamar with a helmet I swear it would be a riot at that exact moment.

He swung a helmet and hit a dude in the head with it. Its a minor miracle we didn't see a Rudolph's skull split wide open on national TV. Not really much to wait on, regardless of context. https://t.co/4j1e3Ot8ia

Just so yall know that inside a @nfl locker room @MaurkicePouncey is a hero. He protected his QB and he was willing to risk it all for his teammate. Ain't many dogs like that left in the game. He should be fined but no Suspension for Pouncey. That's a REAL TEAMMATE! @nflnetwork

Even old friend Antonio Brown had to chime in:

This for you Mason !!!!! pic.twitter.com/J8N3TLOWHp

Wow turn on the TV and see Myles use the helmet to smack the QB dude would have been mopped up back in the day dude better get a lot of games for that assault with a weapon. That was very classless those are the Browns 🤷🏾‍♂️

Neither @steelers @MaurkicePouncey nor DeCastro should be suspended! All they did was protect their defenseless QB. They shouldn’t be penalized at all. @MylesLGarrett should be DONE for the the year! #SteelerNation #Steelers #HereWeGo #Browns #factorback pic.twitter.com/mwIulPvRb0

I have seen players hit with helmets at practices. This is the first I’ve ever seen in game. Myles Garrett needs to be done for an extended period of time. No pay, and heavy fines! His final action were inexcusable, but anyone who implies it’s anything more than that is wrong!

So what's it mean for Garrett? Probably this:

Myles Garrett done for the year

Browns source on Garrett just now: "Beyond Wow! I'm completely embarrassed about the situation. I have never been apart of anything like that. Unbelievable. For us to play as well as we did and for that to happen...disheartened."

Stephen A. Smith believes Myles Garrett should be suspended for the rest of the season.

Bro i can’t even believe that just happen.

Suspend fake tough guy @MylesLGarrett for the rest of the year. Period.

Actually Assault! He should be escorted out of the stadium in handcuffs #mylesgarrett

He’s done for the rest of the year

That. Is. Insanity. Wow.

Damn this fight taking away from Melo shine 🤦🏾‍♂️

Share
Tweet
Email
While Garrett lost mind, Steelers lost a big game ☕
Rooney on game’s finish: ‘It is a shame’