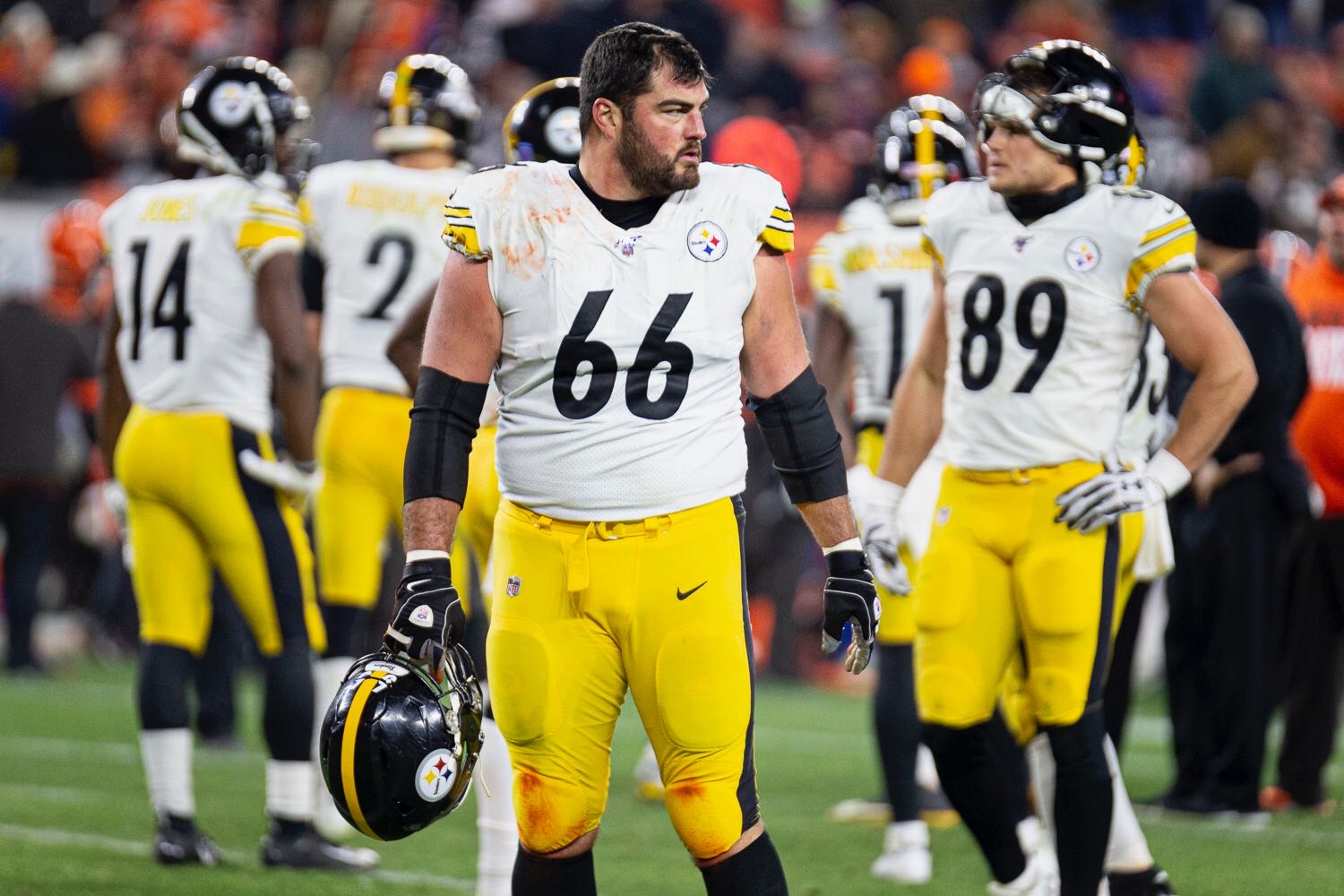 If teams can simply overload the Steelers’ offensive line and win, this will be a rough final six games.

The Steelers’ 21-7 loss to the Browns at First Energy Stadium last Thursday included four sacks allowed, a season high that raised the team’s season total to 15. That’s still the second-fewest in the NFL, but the o-line’s performance has hit a snag of late.

They’ve allowed seven sacks the past two weeks against the Browns and Rams. What’s more, the offense has averaged 50 rushing yards in those two games, which is not something that can continue if staying in contention.

Let’s look at how they can turn things back around:

Plenty of the Steelers’ issues the past two weeks have been about matchups. Two weeks ago, they faced the best defensive player in the NFL, Aaron Donald, and last week they faced one of the league’s premier edge rushers, Myles Garrett.

Garrett accounted for zero sacks, but he hit Mason Rudolph three times and drew two holding penalties from Alejandro Villanueva. Randy Fichtner did scheme help for Villanueva’s matchups with Garrett through most of the night, but Villanueva still struggled.

You can see Vance McDonald help Villanueva by chipping Garrett from the outside shoulder before he goes into his route. But Villanueva’s feet stop chopping and Garrett crosses his face to beat him inside. Villanueva ends up holding him to keep Rudolph clean, drawing the penalty:

One of the worst sins of offensive linemen in pass protection is failing to protect their inside gap. Villanueva got help to his outside and still allowed Garrett to beat him inside, which cannot happen. Garrett is an elite athlete that will capitalize on linemen slow in their footwork or sloppy in fundamentals.

That happened again to Matt Feiler on a third down where Chad Thomas beat him inside. He also gets help to his outside shoulder from Trey Edmunds, who chips Thomas. But Feiler doesn’t move quickly enough and Thomas’ swim move beats him to the inside:

Thomas isn’t a matchup nightmare like Garrett or Donald, so this is more inexcusable. But the film clearly showed most of the line’s issues came from individual mistakes in subtle footwork.

As good as Villanueva has been in the past, he’s always had his lapses when you’re reminded why he was an undrafted lineman, just like Feiler. The Steelers’ line had survived so far because they were helping negate those issues and neither player had atrocious games.

While the game progressed, those problems lessened. And that’s a good sign for first-year line coach Shaun Sarrett. They made adjustments to address where they were getting beat and avoided major communication failures for most of the second half.

But other matchup issues came when the line was overloaded and needed help. Like this sack by safety Juston Burris who overloaded the left side of the Steelers’ line.

Rudolph and the line had the proper adjustment called to protect against the overload, but Jaylen Samuels was unable to make the proper stop in the hole, leading to another fumble off a sack:

If teams can simply overload the Steelers’ offensive line and win, this will be a rough final six games. They need extra protectors that can do what James Conner did last year when he made major strides in protecting Ben Roethlisberger.

Those overloads also impacted the running game, which only produced 58 yards against the Browns. But what’s most troubling about the Steelers’ run game is that it can’t be relied upon for even the shortest of distances, like on third and fourth downs with one yard to go.

And the answers on how to fix that remain the same as when I wrote about the Steelers’ short yardage issue in early October; play against opponents’ aggression.

Here’s another third-and-1 where ex-Steeler Morgan Burnett snuffs out Trey Edmunds before he can even get going. Burnett is a safety lined up in front of Mack Wilson and blitzing off the edge. Nick Vannett is lined up too wide to stop Burnett, who adjusted to the spot when the Steelers were already set.

Look at the entire Browns defense and you can see the only thing on their mind was to blow up the run:

What’s huge about Burnett’s play is that the rest of the Steelers’ line does its job. They control the line of scrimmage and collapse all the Browns’ linemen and linebackers inside to give Edmunds an isolated shot to beat a cornerback. But because Burnett overloaded one side, he beat it.

These are the times the offensive line can’t do it themselves. They need Rudolph and Fichtner to catch a defense off guard and capitalize when an overload blitz is sent. That happens on occasion, but not often enough.

Here is a second-half adjustment when the Browns blitzed six and the Steelers pick it up, allowing Rudolph to find James Washington for 22 yards.

The Browns even try a delayed stunt and everything is picked up. Rudolph has the pocket to stand his ground and step into his throw:

Feiler and Villanueva weren’t alone in their mistakes, as even veteran Ramon Foster missed an inside-gap blitz on a fourth down that cost the Steelers.

But those all are temporary mental or fundamental lapses that we’re seeing these players execute. That’s why no part of these last two games should suggest the offensive line is falling apart, just having breakdowns here and there.

If the line bounces back, don’t be surprised. But if they don’t, especially against a Browns’ defense without Garrett, it will trigger major alarms about the state of the unit moving forward.

Carter’s Classroom needs your help! We are seeking sponsors for the 2019 NFL season that would be willing to see their brand grow through advertising with us. All interested parties should contact me at christopher@dkpittsburghsports.com.