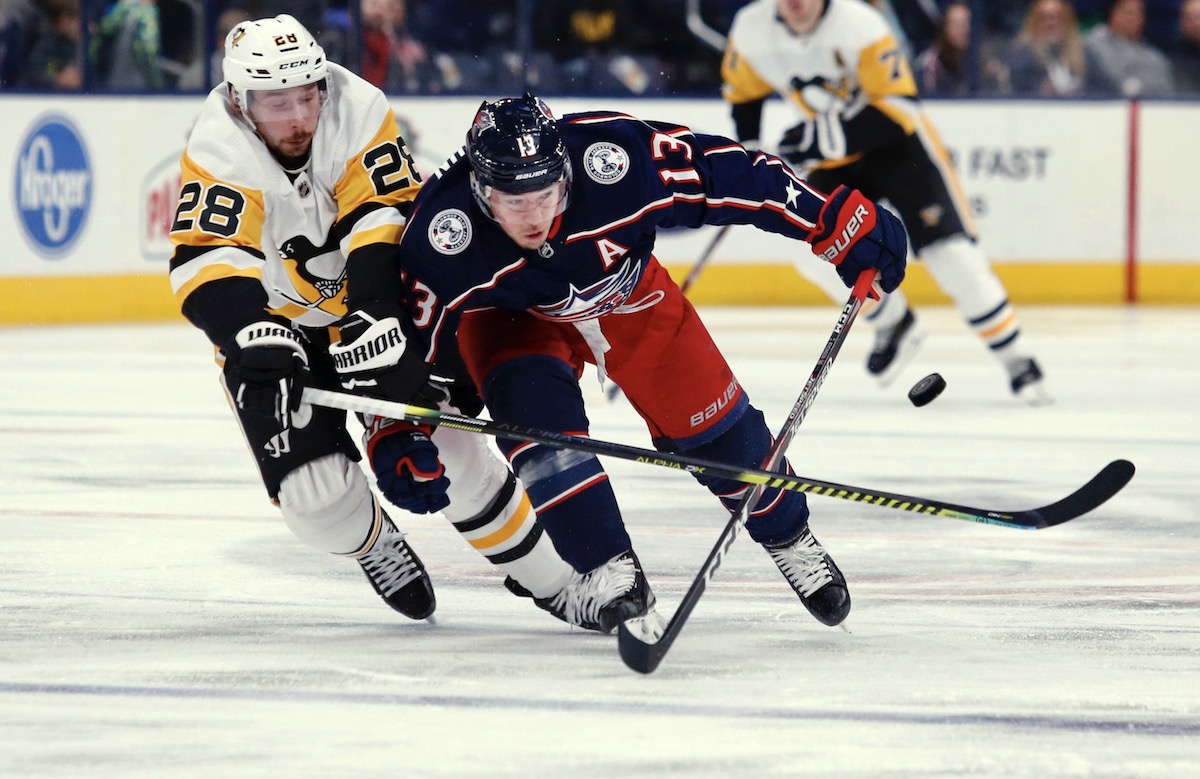 COLUMBUS, Ohio -- “I just don’t think we played well enough tonight,” Mike Sullivan said of the Penguins' performance after a 5-2 loss to the Blue Jackets at Nationwide Arena on Friday night.

The Penguins got off to one of their worst -- if not the worst -- starts of the season in the first period here, and it's a miracle the game was 1-1 after 20 minutes. Sullivan was asked if he had an explanation for why the start was so poor.

And yet, Tristan Jarry was able to keep the Penguins in it in the first period. The Blue Jackets' only goal was an Oliver Bjorkstrand shot that deflected in off of Gustav Nyquist. There's not much Jarry could have done on this one:

The Penguins tied the game late in the first. Dominik Simon, bumped to the top line after Bryan Rust was injured in the morning skate, chipped the puck out of the zone to Evgeni Malkin, who flipped the puck over Columbus defenseman Zach Werenski to Jake Guentzel. Guentzel waited out Joonas Korpisalo then slid the puck five-hole:

"We didn't play hard enough, we didn't play smart enough," Sullivan said of his team's start. "It's hard to win when you get outplayed the way we did early in the game. Having said that, we survived it, 1-1."

The Penguins looked much stronger in the second period, but a couple of soft goals put them in a hole they weren't able to get out of.

"It's 1-1 after the first, then we give them some easy goals," Patric Hornqvist said. "They probably deserved that in the first period, but it was 1-1 after."

The first goal of the second period was the most boneheaded. Malkin, who led the team with two giveaways, tried to drop the puck back to Brian Dumoulin but instead left it right in the lap of Nick Foligno, who finished just 26 seconds into the middle frame:

The Penguins' penalty-kill, which went 2-for-4, allowed its first goal of the game 2:26 later with this backhander from Nyquist:

Another Columbus power play allowed Foligno to get his second. Jack Johnson blocked the initial shot but lost the puck in his skates, and Foligno was just able to sweep the loose puck into the net:

Kris Letang scored a one-timer off of a feed from Guentzel at 5:20 of the final frame to cut the Blue Jackets' lead to two, and the Penguins were able to rack up a total of 18 legitimate third-period scoring chances to the Blue Jackets' three. But there would be no rally, and Nyquist outraced Letang in the final minute to complete the hat trick with an empty-netter.

"It's tough to come back every single game," Hornqvist said. "We had to give them credit, but we have to be better as a team. We have to find a way to play better, even when we don't have our best game. We have to stick with it."