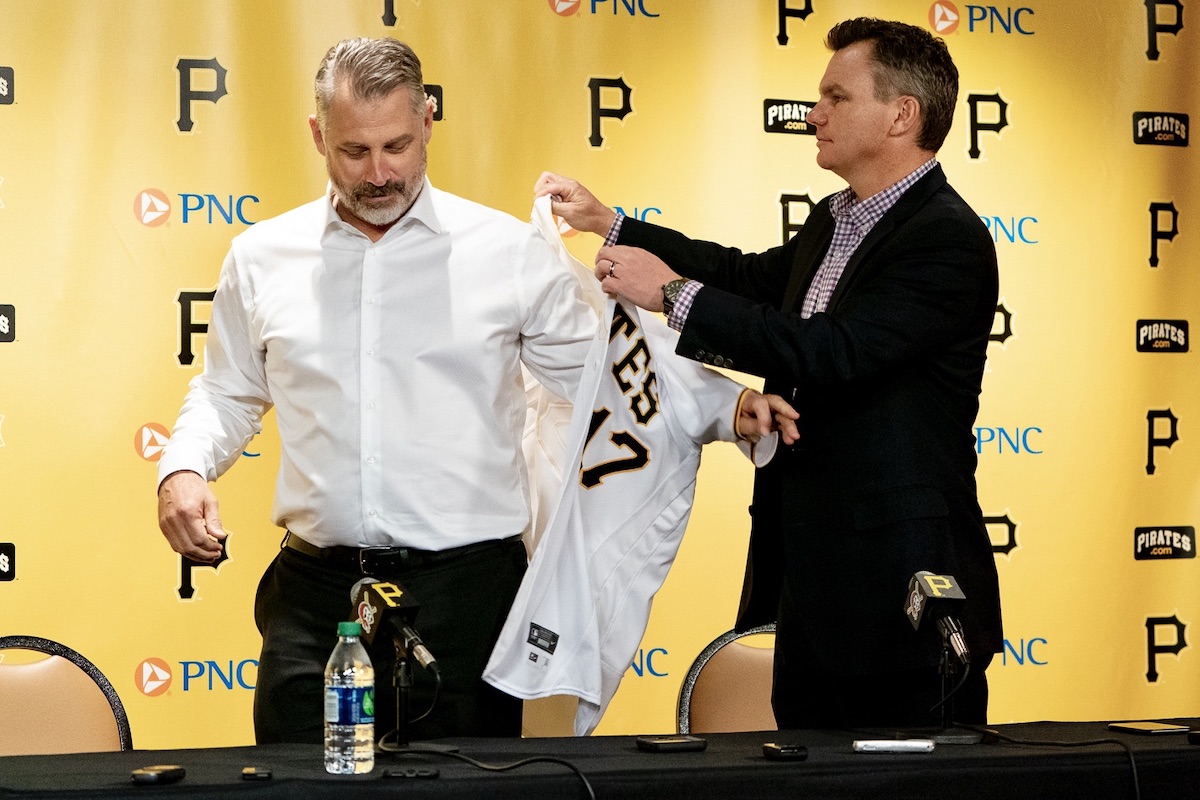 Amid a swirl of snowflakes outside PNC Park and a spectacular swirl of change inside, the Pirates' new braintrust beamed from the press conference podium about the bright future of baseball around here. And fairly so. If I'm being honest, this wintry scene was more uplifting than any witnessed here all summer.

Partly, that's because Derek Shelton was a blast.

The new manager, finally introduced a week after he was announced and two-plus months since Clint Hurdle's firing -- hey, a lot's happened, right? -- laughed and smiled with a visible ease and sense of self-assurance. He made others laugh and smile, as well.

On how long his hiring took: “I have the cleanest garage of any house in Florida. I probably cleaned it 15 times.”

On sharing that podium with Amherst alum Ben Cherington: "I’m definitely not as smart as Ben. I went to Southern Illinois."

On clumsily donning the No. 17 jersey presented to him by Cherington, then sitting down with several buttons still undone: “This has never gone smoothly for any manager who has ever done it, right?”

That kept on throughout the session and beyond, when Shelton, Cherington, Bob Nutting and Travis Williams broke into separate interviews. Smiles, laughs, self-assurance. And not a solitary trace of the nose-in-the-air condescension of any of their predecessors. Just a bunch of guys feeling good about where they are and where they're headed.

"One thing I've probably learned the most is the more you talk to players, the more you build relationships — not only on a professional level but a personal level — it's going to lead to better things," Shelton would say. "We're going to start that way. It's definitely going to be a culture where we're going to have fun. You're going to see us laugh. It's gonna be a fun place to be around. And I think from the players I talked to, starting a couple days ago, they're excited about it."

They are, actually. Joe Musgrove, the clubhouse's leader in every way, stood silently in the back of this press conference room. The previous day, he'd begun indoctrinating Shelton to our way of life ...

Before you ask, yeah he's been there.

... and here he was on this day as a show of support. Josh Bell, who's also been hanging around town "until it gets cold enough to chase me away," as he told me, met with Shelton face-to-face here over the weekend. I've heard from other players who are stoked, who can't wait to get going with this guy.

It's all good in the moment.

But that also raises this: If Shelton and, more important in this equation, Cherington, like these guys, do they build around them? Or, do they survey the damage in the minor-league system wrought by Neal Huntington and Kyle Stark, and decide instead to blow it up and replenish at the lower levels?

I pounded this issue with everyone in sight: Rebuild or not?

That started with the chief decider himself, Cherington. I mentioned to him that I didn't sense there'd be much appetite for a rebuild. Not with his current players, who are seeking support from above. Not with the public, which ran out of patience roughly three decades ago. And he replied ... cautiously: "The kind of player we want with the Pirates is one who wants to win. That's going to help us, having players who want to win. I would be excited to hear that from players. And then, it's our job to try to support them as much as possible, help them any way we can, whether it's coaching support, information support, giving them the best chance to succeed. And we're just going to focus on getting better."

If that sounds like a GM who hasn't made up his mind, yeah, you've nailed it.

Cherington and I spoke extensively later, and he's been so swamped with immediate, pressing tasks -- hiring the manager, rounding out the coaching staff, preparing for Winter Meetings next week in San Diego -- that he's hardly had opportunity for even a cursory review of the system, much less giving it the exhaustive attention it deserves. I get that.

But that doesn't change that deciding on a rebuild is the top priority for this franchise this offseason.

Assuming it hasn't already been decided.

As mentioned, I carried on several conversations here, and based on those, I feel comfortable saying that the Pirates' foundational thought entering 2020 is that they'll adopt more of a hybrid stance: Build around younger players already here, such as Bryan Reynolds, Kevin Newman and the like, while pursuing prospects in exchange for older players.

And you bet, from what I was told, that means Starling Marte's a goner. If it doesn't happen next week in San Diego, then it'll happen over the offseason or even in the first half of the 2020 season before the July 31 trade deadline. But one way or another, provided there's value in return, he'll be traded.

I've written since August that I'd be OK with that as long as a competent GM was in place. That's now the case.

Nutting's made clear to all concerned he doesn't want "a chase for .500," meaning settling for mediocrity with patchwork moves. That's a healthy thought process. At the same time -- and this, in the fullest context, is to Huntington's credit -- there are enough younger pieces already in place that the hybrid approach can work if executed smartly. Move Marte after what might've been the best year of his career. Maybe even consider moving Bell at his peak, with three full years of arbitration control ahead. But otherwise, fortify the present, including with a realistic increase in payroll.