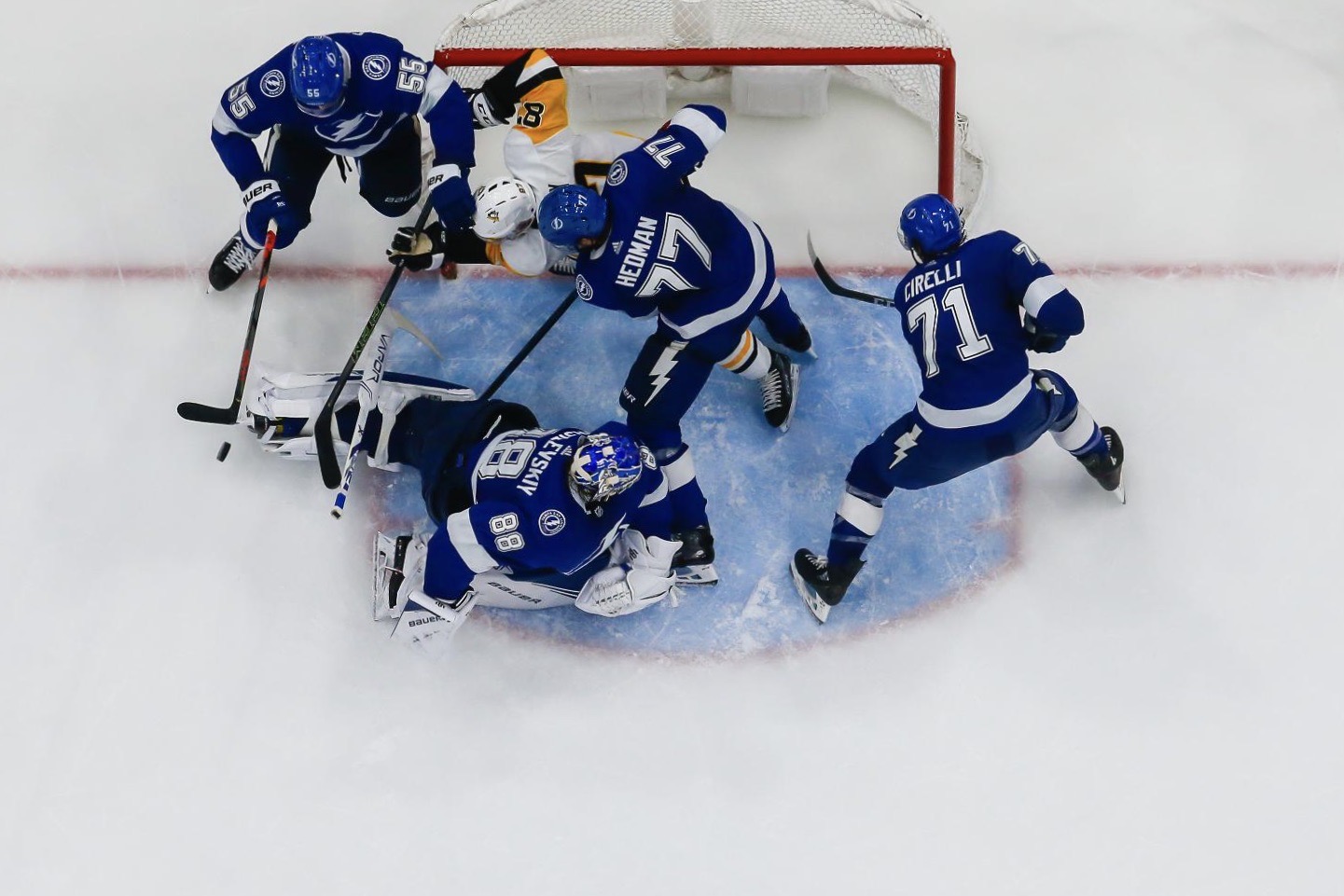 So when I'd sat next to him in the visitors' locker room late Thursday night at Amalie Arena, asking him about all that'd just gone awry in the Penguins' 4-2 loss to the Lightning, it required not the slightest prompt for him to point the finger squarely at himself.

Which, of course, was ludicrous.

This was on the NHL's best, deepest, hottest team. And from the Penguins' perspective, it was basically on everyone not named Evgeni Malkin.

For the record, though, this is what McCann was referencing:

That Steven Stamkos goal, the one that put Tampa Bay up, 2-0, in the first period, actually was on McCann. Sidney Crosby had been leading a three-on-two the other way, and Justin Schultz had rushed up to present a trailing target. And initially, McCann did well to hang back and fill Schultz's role, as he's required. But once Nikita Kucherov poked Crosby's pass, then chased it down by the boards, McCann had no business pursuing him.

Once he did, Kucherov launched play the other way and led to the predictable finish by one of the planet's finest:

But again, it came with ample company. Crosby made a similar mistake later on a Kris Letang pinch, and Anthony Cirelli made that one hurt, too:

And there'd be more.

"We were on our heels a little bit," was how the captain himself assessed the broader scene. "They've got a fast team, we gave them some time and space, and they took advantage of it."

Which would be fine. If this were isolation rather than an extension of this undercurrent rut the Penguins have dug the past couple weeks. And also if this matchup weren't a chance to measure comparable places in the standings against comparable realities.

But it was both those things. And what's moved me of late, above and beyond any outcomes, is that it's become increasingly clear that what's currently on the wings won't cut it.

Not without Jake Guentzel.

Not without Jim Rutherford making a major move to replace him.

Bryan Rust's got the 22 goals, so he's set apart. He's blossomed into something special. But if there's anyone else poised to rise up into championship-caliber top-six wingers among McCann, Patric Hornqvist, Dominik Simon, Zach Aston-Reese, Brandon Tanev, any of the various Wilkes-Barre recalls or -- heaven help us -- Alex Galchenyuk, I'm not seeing them. Neither of the injured forwards, Dominik Kahun and Nick Bjugstad, figures to be transformational upon his return, either.

Fair or not, McCann's case might sting the most, since he's been the one bumped up to the Crosby line in Guentzel's absence. He's got 14 goals for a career-best pace, to his credit. But he's now scoreless with a minus-6 rating over the past seven games. When Simon fires blanks, it feels semi-palatable since he does so many little things to help Crosby and drive possession. McCann just isn't that type, though, and it's evident without any sort of advanced analysis, in that the Crosby line's possessions are one-and-done all too often.

McCann's feeling it, too. I asked about any additional burden that's applied not just to him but to all wingers with Guentzel out, and his response couldn't have been more candid.

"Honestly, it's it's tough to replace a guy like Jake. He's a great player," McCann began. "You know, I want to be that guy. And I want to be somebody that you can rely on. Tonight, I wasn't good enough."

Seemingly catching himself from being too tough on himself, he added, "I'm just gonna be better."

He will. But it won’t be enough.

And yeah, I’d be writing precisely the same even if the Penguins had put one home on that over-passing five-on-three and somehow prevailed against yet another visibly superior opponent, as occurred Sunday in Washington. Because the ultimate goal for this franchise, at this stage of the Crosby/Malkin era, can’t be superstar-ing, scratching and squeaking past the NHL’s elite, though that can be fun. It’s got to be the Cup.

Rutherford's expressing no urgency on the trade front, but that's standard for him and most executives. He's here. He saw this. He's seen these other games. He's seen his head coach roll out more of the Crosby/Malkin two-headed monster than ever. And he knows what all that means.

As the team boarded the charter bus outside the arena after this one, Rutherford stood outside, speaking on his cell. One can only hope he keeps burning through those roaming minutes.

• I'd heard here in the afternoon that the Penguins' coaches were seriously considering making Galchenyuk a healthy scratch. Turns out, they needn't have bothered. He'd wind up suiting up, and he'd wind up once again ranging somewhere between abysmal and barely visible with no points, no shots, a minus-1 rating and an egregious giveaway in the first period that should've made him a minus-2.

I get wanting to maintain a player's trade value, but the other 30 GMs know he's been terrible. So, in the interim, there's no rational reason to keep using him in games. He adds nothing, subtracts much.

• In fairness, Sam Lafferty and Anthony Angello weren't any better on that same fourth line, which logged nine flat shifts.

That matters, too, toward what I was discussing above. In the Penguins' recent Cup seasons, they always had that surge from Wilkes-Barre, most of it on the wings. That's nowhere on the horizon.

• I did cite Malkin as the exception, right?

Good, because he just kept right on, scoring and setting up both goals:

Man, that second one's an artful finish. I should probably exempt John Marino, too. It's just that he's so easy to take for granted.

• Uplifting news, by the way, as our Dave Molinari confirmed here through a source, that Marino apparently will be OK despite being struck in the left cheek by a deflected Stamkos shot in the third.

• Anyone else surprised Matt Murray made a second consecutive start?

I was, but just a bit. I'm sure Tristan Jarry will get the game in Sunrise and, in turn, Murray will get the Lightning again next Tuesday at PPG Paints Arena. So there remains no controversy in one direction or the other.

• Murray was strong again, by the way, particularly in a first period that probably should've been 4-0 or 5-0.

I asked about his evening:

• The guy at the far end was really strong, but then that's been true for more than a month now for Andrei Vasilevskiy. This 29-save victory improved his ongoing points streak to 15-0-2, a span in which he's posted a 2.09 goals-against average, a .930 save percentage and two shutouts.

"Vasy's been huge for us, and he was again tonight," Victor Hedman, the big defenseman, said. 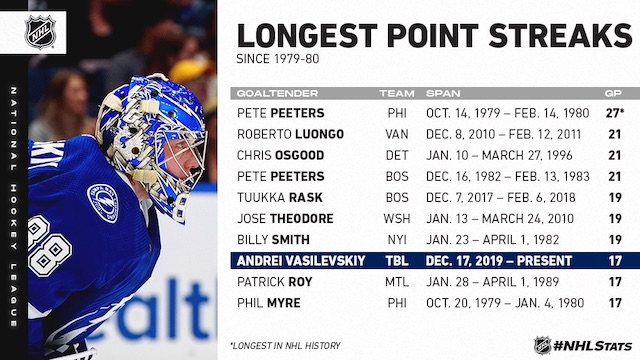 • This had nothing to do with the final score, but Cedric Paquette's filthy cross-check from behind on Crosby being called a minor ... that might be OK by the NHL's current guidelines, but it really shouldn't be. It's unfathomable to me that the league continues to tolerate the use of the stick as a weapon on opponents' backs, necks and heads. Never mind doing so from the blind side.

At the very least, a cross-check from behind -- regardless of the body part attacked -- should be a major. Every single time. No gray.

• Paquette will do that again to someone again next Tuesday. He's good for a couple cheap shots a game. Can't imagine why.

• Onward across Alligator Alley. Practice at noon at the Panthers' place. The lunch special is the two-man advantage.