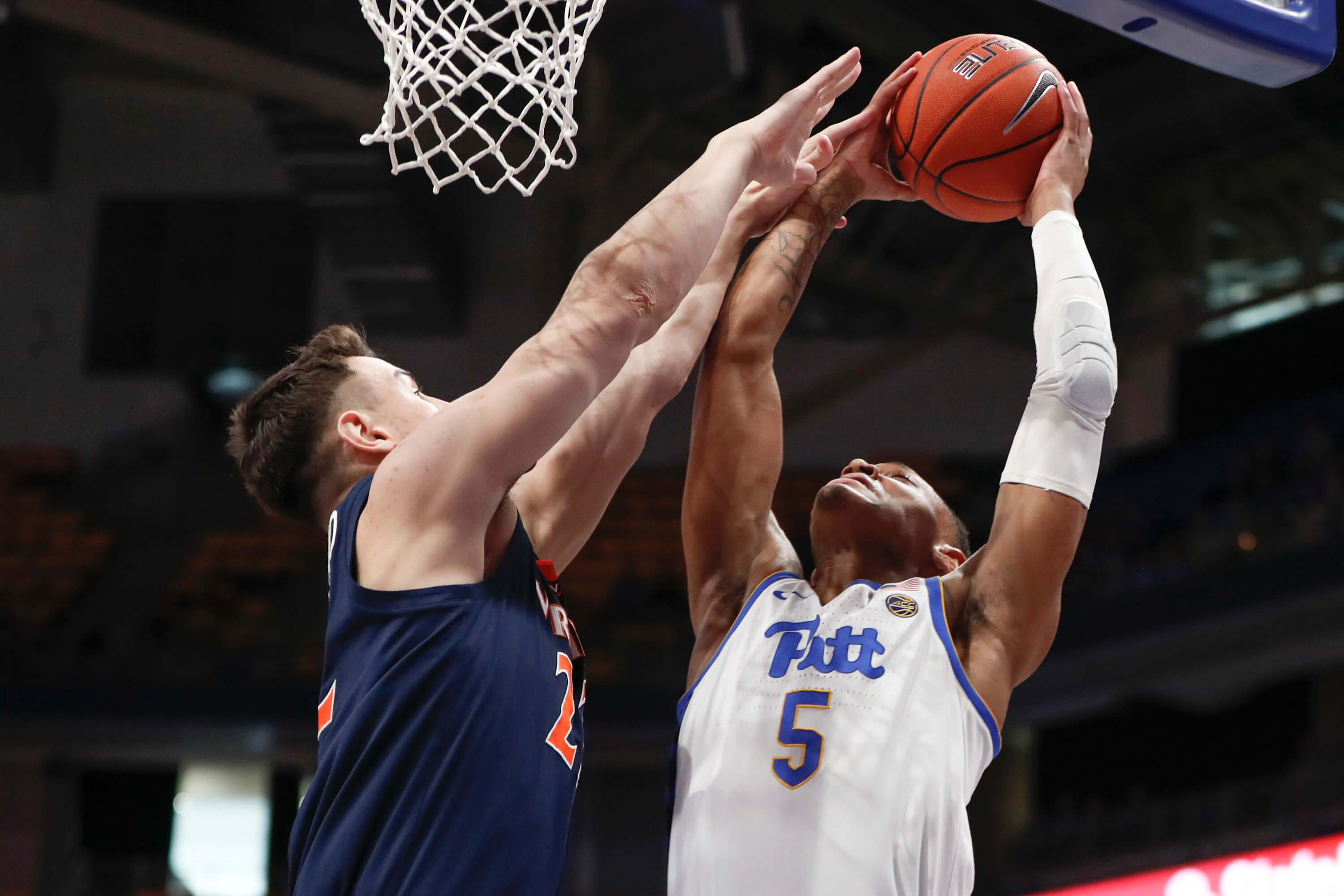 Pitt saw its losing streak extend to four games with a 59-56 loss to Virginia on Saturday afternoon at the Peterson Events Center. But of all the losses Jeff Capel's team has suffered en route to its 15-13 record, this might have been the best encapsulation of the team's year.

If you want to know why, look no further than how their second half went.

After a competitive first half where the Panthers fought to keep Virginia within striking distance at 31-29, it took 14:25 to score their next 10 points. By the time that happened with 5:35 left to go in the second half, Virginia had opened the score up to 51-37, its largest lead of the game.

Virginia has the reputation of a great basketball program under Tony Bennett, and especially a great defensive program. The Cavaliers are the best defensive team in the country coming into Saturday's game, allowing 52.6 points per game.

Their stifling defense limited the Panthers to 19 percent during that slow opening to the second half. It was the lead from which the Panthers never recovered.

But they sure did try.

Xavier Johnson, who led the Panthers with 16 points, keyed two surges in the final minutes.

The first started with just under 3:30 left in the game and saw the Panthers score eight points in just 45 seconds. Johnson had two assists that accounted for six points between Trey McGowens off a three-point shot and Terrell Brown off a three-point play off a foul, and Johnson would add his own made shot.

But the second surge was what put the game within reach. As two minutes were left, the Panthers went on a 7-0 run over a span of 66 seconds. Johnson had a hand in every single point with an assist to Au'Diese Toney that led to another three-point play off a foul, and two baskets of his own in the paint.

He also created these opportunities with defense has he logged a block, a rebound and a steal that kickstarted the run.

"We were aggressive," Johnson said when asked how the run got started. "Coach told us to go 33 on the 1-2-1-1 press and that helped us turn around. We are a good defensive team. That is where we excel."

That formula played a huge part in the Panthers' effort to keep the game within reach. They scored 18 points off turnovers, a factor Capel knew would be key.

"We were able to force turnovers," Capel said. "That's one of the things coming into the game that we wanted to do. We felt like that if we could pressure the basketball and force turnovers that would allow us to get out of transition and get some easy baskets against their defense that wasn't set yet. I thought when we did that towards the end, we were then able to force some turnovers, get some defensive rebounds, and we were able to get into transition and softened their defense up maybe a little bit.

"Then, we had a little bit of movement, and we made some shots."

This has been the source of the Panthers' best games this season. Even if they aren't shooting efficiently, their best moments happen when they're playing fast with Johnson and McGowens slicing through defenses with explosive drives that either lead to their own points or open opportunities for teammates.

All but one of the Panthers' points came from their bench. Toney flanked Johnson with 13 points, while both Brown and Justin Champagnie finished with nine, and McGowens had eight.

But the Panthers shot 38.6 percent from the field, lower than their ACC-worst 40.7 percent for the season. Of their 13 losses, this was the fifth-highest their shooting percentage, and maybe that was part of the reason this was their first loss by a single possession this season.

If anything, that shows that this lack of efficiency on offense is a theme, and maybe the theme, of the season.

Missed shots and not finishing possessions where they've worked for open looks plagued all but Johnson and Toney against Virginia. McGowens made just 3-of-9 field goals, just like Brown, who missed all six of his shots from close range. Champagnie was even worse only making 4-of-12, including hitting one of his four three-pointers.

But the worst came from Ryan Murphy who was 0-6, including 0-4 on three-pointers. And that doesn't include the shot he didn't get off at the end of the game when Johnson drove the ball to the perimeter and gave Murphy a chance to score.

The lack of efficiency was an obvious problem, even with Virginia's elite defense.

"They are the best defensive team in the country," Capel said of Virginia after the game. "Year in, and year out, they're pretty consistent there so I think a lot of it had to do with them. They are a hard team to score against. Some of it was us. We were trying to avoid contact instead of trying to go through contact."

That bit about contact was definitely about Brown and forwards Eric Hamilton and Abdoul Karim Coulibaly. That trio of big men made only three of their 12 shots combined.

Combine the problems with the forwards' performance in the paint with a horrible showing on three-point shots and it makes for a very tough day against the NCAA's best defense.

"Some are good looks and some of us just have to step up our game and have enough confidence to shoot it," Johnson said on the Panthers' issues with three-pointers. "I think we have some pretty good shooters on the team, it's just not showing on the court."

• The notion of the team's problems with efficiency and consistency was not lost on either Capel or the players. As Capel talked about after last week's loss to Florida State, he knows his program has a ways to go before they establish a regular high level of play that can pull of big moments against defenses even as good as Virginia.

Having the ACC's worst field goal percentage means every other part of the Panthers' game has to be perfect. But with a young team in a program rebuilding from the Kevin Stallings days, that means the team will be very inconsistent as they grow.

Or as Capel put it after the game, incredibly inconsistent.

"When you go through lulls, six minutes today, five minutes another game and you don't score, when you're not experienced and you're not mature, that affects everything," Capel said.

"That affects everything; it affects body language, it affects defense, it affects rebounding because you put so much on yourself to score when you know you're struggling. Today we got down and we started pressing. We were able to force a couple turnovers and get some easy baskets. We hit a three, finally, McGowens hit a three. Those things gave us a little more juice and I thought it put them on their heels."

That 'finally' by Capel sounded like a sigh of relief, as it was the team's third, and final, three-point shot made and it came with 3:12 left in the game.

Sophomore guard Toney, who had his 10th game with points in the double-digits, also noted the team's problems after the game.

"Sometimes we take our foot off the gas," Toney said. "And there are too good of teams in this league to do that. You always have to put your foot down."

You could see the demeanor Capel mentioned during that second half stretch when it took them over 14 minutes to score 10 points. Players passing on open looks, not finishing strong in the paint, all part of an offense that was unsure of itself even when it had schematically beaten Virginia's defense by finding the open man.

"It's frustrating," Toney said of the offensive shortcomings. "But at the same time we are all here together. We just have to find a way to get out of this hole we are in now. Only thing we can do is move forward, and just keep pushing and grinding through it."

These are the war stories and battle scars that will be worn by the young players such as Johnson, Toney, McGowens and Champagnie in the coming years as Capel tries to improve the program and get them back in the NCAA tournament for the first time since 2016. How they grow from them will define their collegiate careers.

• The one major statistical category the Panthers top the ACC in is turnover margin, where they average a difference of +3.52 turnovers per game. This means they're forcing an that much more turnovers per game than what they're surrendering.

That only got better today with Virginia's 16 turnovers, compared to the Panthers' 10, moving their average margin to +3.60, which would still be the best in the ACC.

If there's anything for Pitt to lean on as a strength for the final three games of the year and carry into the 2020-2021 season, it's the rate of success in this department.

And for Bennett's Cavaliers:

Pitt returns home to face Syracuse Wednesday at 7 p.m. at home. Hunter Homistek will have the coverage.