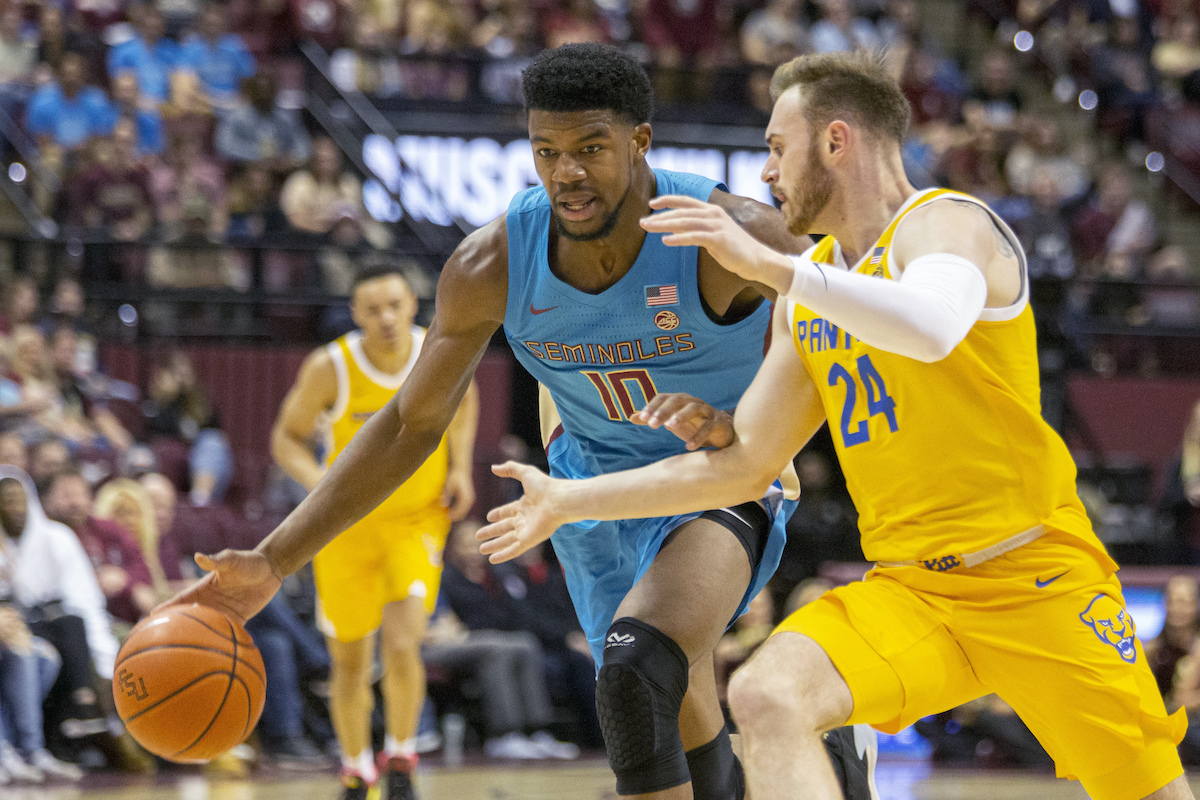 TALLAHASSEE, Fla. -- Sorry, Panthers fans, but this 2019-20 season isn't getting prettier. The reasons were smeared all over this 82-67 defeat against No. 8 Florida State Tuesday night at the Donald L. Tucker Center.

We can point to Trey McGowens shooting 0 for 7 from the field or Xavier Johnson going 3 for 14. Justin Champagnie's 2-for-8 effort wasn't encouraging, either. Maybe you want to talk about that 40-27 rebounding edge Florida State enjoyed, this after entering the half tied with 17 boards apiece.

That's lazy. Distilling this one to a specific player or a specific stat doesn't cut into the meat of the problem. But Jeff Capel does. He fired up the chainsaw at the podium after the loss, carving out exactly what plagues this Pitt team.

Volume up and enjoy:

If the truth hurts, then this rant is a kill shot.

"We need time," Capel began when asked about the team's lack of depth. "I've been here for a little bit over a year. We need time to recruit, and then we have to win some recruiting battles. It's going to happen, but it's not going to happen right away. Maybe because of the start we got off to, people thought this is going to happen, like, quick."

He snapped his fingers.

"It's not quick. There was a dumpster fire that I took over. And we've done a really good job. These guys have fought and we've put ourselves in a position where we've won more games than we did last year, we've won more conference games, there's an energy about our basketball program right now. But it's not going to happen overnight."

Shoo. Take a breath, because there's more to come. We talked about how Pitt ran out of gas against Virginia Tech, a theme that also reared its head in the team's previous loss to Clemson that kicked off its current three-game skid. And while that sounds like a too-convenient narrative — more of an excuse than anything — there's merit to it when you dig into this Pitt roster.

Tonight, Johnson, Au'Diese Toney and McGowens all logged 30-plus minutes.

Barring foul trouble, they do that every night.

Champagnie just missed the cut with 28, shortened because of two quick, early fouls. Gerald Drumgoole logged a season-high 19 minutes, while Karim Abdoul Coulibaly and Terrell Brown split time at the five, putting up 15 and 24 minutes, respectively.

OK, that's cherry-picked and a little exaggerated. Let's take away the five who played under five minutes of garbage time. That leaves 11 players — and all 11 played at least 10 minutes, maxing out with Trent Forrest's 25 and P.J. Walker's 24.

Pitt just can't compete with that. There's the physical side — Florida State keeping its players' legs fresh — but it's mental and schematic as well. Different players bring different looks and different skill sets, and the constant rotation, the waves upon waves of bodies, were simply too much for this Panthers team to handle.

"Their depth, their size, their athleticism just overwhelmed us," Capel said.

The players felt it, too.

"We have guys playing 40 minutes, 35, 30 vs. their guys playing 20 because they go deep in their bench," Brown acknowledged after this one.

“It’s really hard and frustrating because you don’t have the fresh legs," Toney added. "You’re playing 30 minutes a game, and so it’s more mental than anything but like coach said, you gotta dig through, push through adversity.”

So what can you possibly do about that? It's not just game over because you're logging big minutes, right?

“When we use timeouts, I just hydrate a lot, get the massage gun, just keep your body prepared for the next couple minutes of the ball game," Toney was telling me. "And you gotta block out stuff, like, you know if you can’t go, but it’s just your mind telling you you can’t go but you really can go.”

Tuesday night, it just wasn't there for these Panthers, and facing a team that went 11 deep for significant minutes highlighted the issue like never before. But if it wasn't all clear from watching the action on the court, Capel made sure there were no lingering question marks after the game. Here's how he finished in that video up there:

"And so we have to be able to recruit," Capel said of the solution. "We got three guys that we're excited about coming in [John Hugley, Noah Collier and Max Amadasun]. We have a kid sitting out [that I think] is really, really good [Ithiel Horton]. And so if we can keep the core together along with some of the guys we have, then we'll get quality depth. But we do not have it right now. There's nothing we can do about that right now."

Here, Capel became more animated. It was obvious that simply talking about the issue was frustrating to him, and he let us know about it.

"And you guys follow us," Capel said, meaning myself and the other Pittsburgh-based reporter on the scene. "You should know that. You should know that. That shouldn't be something you ask. There's nothing we can do about that. This is who we are. We can't make a trade and we can't do that. And so, this is who we are. Understand that. Don't get ahead of yourself with this stuff."