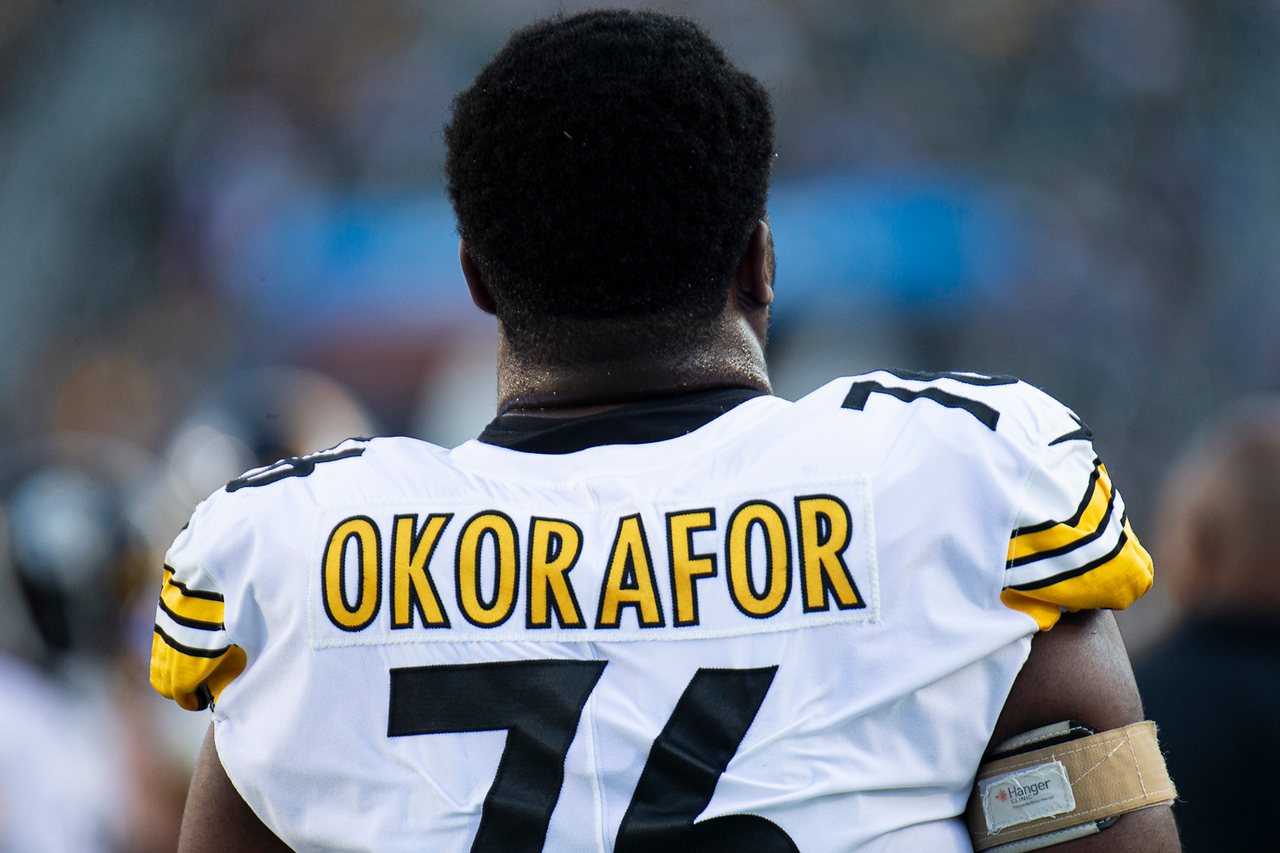 I'll credit my Steelers Nation Radio partner Matt Williamson for this one, though I'm sure he didn't come up with it, but he says it all the time: Teams tell you what they think about themselves or their personnel by the offseason moves they make.

There's plenty of evidence what the Steelers are thinking and how they feel about their team with some of the moves that have happened in the past two days.

First, they prodded Ramon Foster into retirement with the idea that either B.J. Finney or Matt Feiler would replace him at left guard.

They would have been OK with either option -- within reason. They weren't going to spend a bundle on Finney, not with Chuks Okorafor and Zach Banner waiting in the wings.

The Steelers made a pitch to keep Finney, who signed a two-year deal with the Seahawks that could be worth as much as $9.5 million if Finney plays the way he's capable. The Steelers weren't willing to go that high. They couldn't even guarantee Finney would be a starter.

What if, for example, Okorafor, a former third-round draft pick, comes to camp this year and lights things up?

The potential for that is there. After all, he had surgery to repair a torn labrum after his rookie season. He'll be two years removed from that issue in 2020. There were plenty of draft analysts in 2018 that had Okorafor as one of the top five offensive tackles available. But because he was a small school player, having come from Western Michigan, he was going to take time.

The Steelers, obviously, feel that time is now.

That doesn't mean it will be handed to him. Banner is a former fourth-round draft pick. He let his weight get away from him early in his career. But he's in a much better place now. And he's motivated.

One of the things that has made Feiler so valuable is the fact he can play any of the five spots on the offensive line, including center. That's why the Steelers have valued him over Finney. And the coaching staff loved Finney. But Feiler is the more valuable player. And he is an upgrade overall at guard. That's why the team made the move to shift him inside to guard last season to face Aaron Donald when the Steelers played the Rams.

A line with Finney at guard and Feiler at tackle would be good. Finney would have been an upgrade over Foster -- certainly the Foster we saw last season.

But Feiler will be even better. The only question is if Okorafor or Banner will be good at right tackle.

By making this move, the Steelers are saying they believe that will be the case.

• The next move that showed you how the Steelers are feeling about things was the restructure of Ben Roethlisberger's contract.

Yes, it saved them money in 2020. And they have an out with him after this season, though the price tag of the out went up several million with the restructure.

But the fact the Steelers felt comfortable restructuring Roethlisberger's deal shows they feel his rehab continues to go well. Otherwise, they would have restructured some other deals to get the space needed to get under the cap.

If the Steelers want to lower than 2021 cap hit, they can tack another year onto the end of his current deal next spring.

The three-year, $9.75-million agreement with the Steelers is ridiculously backloaded. He has a base salary of just $1 million this season with a signing bonus of $3.25 million. That means Watt will count just over $2 million against the cap this season.

We have a tendency to look at deals and say, well that's an average of $3.25 million per year. But Watt won't count anywhere near that much on the 2020 cap. Heck, he'll still count under $3 million on their cap in 2021 when his base salary is $1.75 million.

Watt has a $1 million roster bonus and salary of $2.75 million in 2022. But if the Steelers like him and he's still playing well, they'll re-sign him to a new deal at that time.

That looks like a bargain, especially considering the $825,000 they'll save against the cap if or when they release Nix.

• There was no way the Steelers could come anywhere close to the three-year, $39-million deal Javon Hargrave got from the Eagles.

The Steelers will find a run-plugging nose tackle in free agency. The move will come in the next few weeks.

Keep an eye on the guys who get cut. They don't affect the compensatory picks formula. Imagine, for example, if the Steelers were able to add former Vikings nose tackle Linval Joseph on the cheap - and by cheap, I'm saying a one-year deal with $5 million.

That won't happen because he just signed with the Chargers Wednesday. But the Steelers could get Brandon Mebane, the guy Joseph will now replace with the Chargers, for pennies on the dollar.

• If the signing of Derek Watt at an average of $3.25 million per season makes T.J. Watt happy -- and it does -- and makes it easier to work out a long-term deal in the future isn't it worth it?

And it's not like it's charity. Derek Watt can play.

• I've been writing it for several weeks, but I'll repeat it again since some fans are in panic mode over the Steelers losing Finney. The Steelers needed to take an interior lineman who can play center in the draft whether Finney stayed or left.

If Finney stayed and was in the starting lineup, the Steelers would want a guy capable of stepping in to replace Maurkice Pouncey in case of in-game injury. They don't like to have to change two spots to fill one.

And if Finney left, which he did, the team has a need for a swing interior lineman to back up the guards and center.

But that doesn't mean they take one with one of their first two picks, unless that's where the value is at. And in this draft, there are only a couple of guys -- Cesar Ruiz and Lloyd Cushenberry -- who are really true Day 1-2 talents. Maybe Wisconsin's Tyler Bladsz or Temple's Matt Hennessy will be available later. But you certainly don't take them in the second round when whatever player they draft isn't going to start in 2020.

• The Browns acquired a tight end (Austin Hooper), right tackle (Jack Conklin) and backup quarterback (Case Keenum) on the first day of the legal tampering period. They signed those guys to contracts worth more than $100 million.

Wonder what it will cost the next new GM in two years to cut those guys loose?

Between the three of them, they have been voted to the Pro Bowl once, that coming from Conklin in his rookie season before everyone realized he's a subpar pass blocker.

• The Ravens upgraded their defensive line with the signing of Michael Brockers and trade for Calais Campbell -- at least on paper.

Both have been really good players in different ways. Campbell is a solid all-around player, while Brockers is a plus run-stopper.

But how much does Campbell, who turns 34 in September, have left? And who's going to play linebacker?

The Ravens' top four linebackers all are unrestricted free agents, though Matthew Judon was franchise tagged. Still, the Ravens are going to spend about $40 million this season on Campbell, Brockers and Judon. You can't have stars everywhere, but it's called a front seven, not a front three.

The Ravens also have defensive tackle Brandon Williams on the books at just over $14 million this season.

Again, they're better on paper with their defensive line. But the second-level situation isn't good. And they have a massive hole to fill at guard with the retirement of Marshal Yanda, who was their best offensive lineman — even last season.

Now, once training camps start and we finally get to see Roethlisberger throw, that could change. Maybe.

But if the offseason shows anything, it's that the games aren't won on paper. Otherwise, the Browns would have been hoisting the Lombardi Trophy last February in Miami. And we know that didn't happen.

I've been covering the Steelers since 1993, the first year of true free agency. And I've heard the teeth-gnashing from Steelers fans every year. Yet somehow, I've only covered three losing seasons. By comparison, the Steelers have gone to four Super Bowls and nine AFC Championship games in that period.

• Anybody else tired of all the Tom Brady 24-hour, wire-to-wire coverage?

Remember, teams tell you what they think with their offseason moves. If the Patriots still thought Brady was a top-tier quarterback, they would have re-signed him.