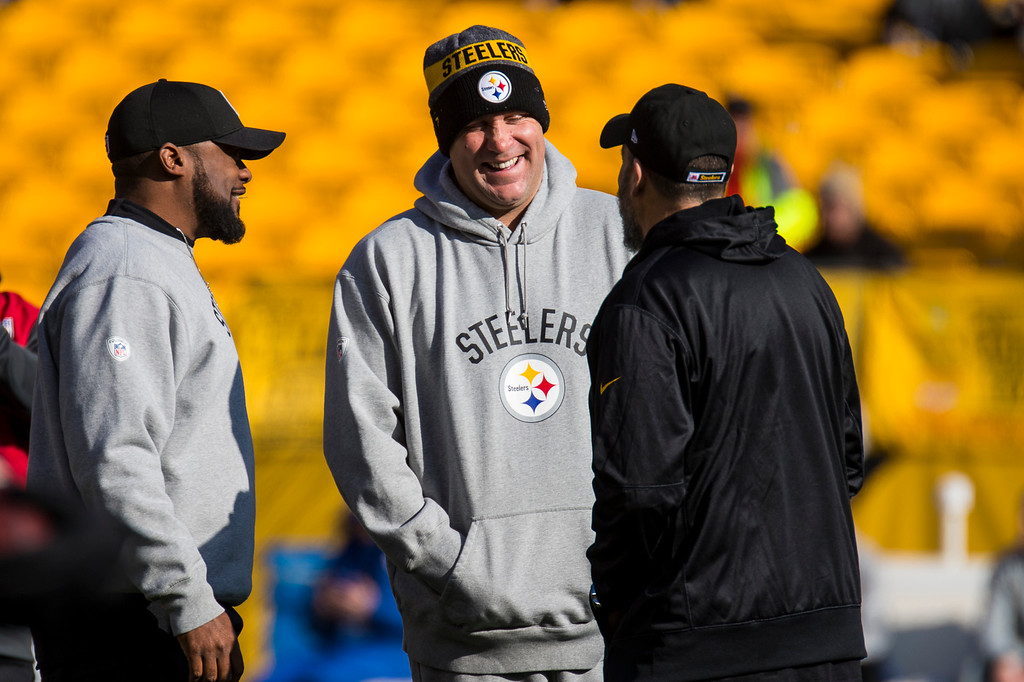 Most recently, Haley took a job as offensive coordinator for Riverview High School — something to keep him busy while he plots his next step.

In an interview with SteelersTakeaways.com, Haley said he's "enjoying my time with my family" while helping take care of his parents in Orlando, Fla.

Throughout the interview, Haley discussed several points that will pique the interest of Steelers fans, as well. He discusses how he came to be hired by the Steelers in 2012, what led to the breakup after the 2017 NFL season and much more.

Take, for instance, this nugget, where Haley discusses the "friction" with Ben Roethlisberger. There were reports that Roethlisberger asked for a "buffer" between himself and Haley, and various similar stories surfaced after Haley's firing. Roethlisberger has kept it classy in the wake of that firing when asked, and the situation has largely blown over.

Still, Haley was asked about it, and he offered the following:

"My number one priority – the direction given to me by [Mike Tomlin] – was to change the way Ben played the game," Haley began. "They wanted to prolong his career and get him away from some of the backyard scrambling style of play that he liked – and was very successful at. So we worked together and evolved his game so he got the ball out faster and let his receivers make plays."

From 2006 to 2011 — the six seasons before Haley's hiring — Roethlisberger was sacked 261 times in 88 starts, almost exactly three sacks per start (2.97). With Haley's offense, however, that figure plummeted, as Roethlisberger was sacked 163 times across 85 starts in the Haley era (1.9 sacks per start). So Haley was successful in helping to eliminate that "backyard scrambling" that would sometimes cause Roethlisberger to hold the ball longer than necessary, leading to hits and, naturally, sacks.

Still, those reports of tension between the two linger, and Haley addressed them.

"The friction thing was overblown," Haley said. "We’d play golf and go out to dinner together. It was tough at the beginning for sure – he and [Bruce Arians] were very close. But I had nothing to do with Bruce leaving. My only regret is in not talking to Ben sooner about implementing the new offense – not talking to him right away. I didn’t understand his sensitivity to losing a good friend in Bruce. But we had a good relationship and had fun together too. I enjoyed it there and being with him."

To Haley, this was no surprise.

"When I was there there were a number of key defensive guys that were retiring," Haley said. "The defense was in a serious transition. It wasn’t the same defense of years before. That’s how Ben and I came up with the 'We need to score 30 points a game' quote. Mike and I met every week and we’d go over how many points we’d need to score that week – sometimes it was just 'As many as we can.'

"I just think that wherever I’ve been I’ve taken what I’ve been given and used it to the best I could. In Arizona, we didn’t have a great run-blocking line and Edgerrin James wasn’t the back he used to be, but we had [Kurt Warner] and great receivers, so I pushed the passing game. I felt that was my strength: I wasn’t system-oriented. Sure I had my terminology and that, but I never tried to fit a square peg into a round hole. You play with the guys you got – [Bill Parcells] always beat it into me that you find out what your players do best and get them to do it. We were lucky in Pittsburgh that we had Ben, great receivers and [Le'Veon Bell] – so we could be balanced and run and pass."

Read the full interview, where Haley discusses his breakup with the Steelers, Jack Lambert skinny-dipping (yep, for real) and much more right here.