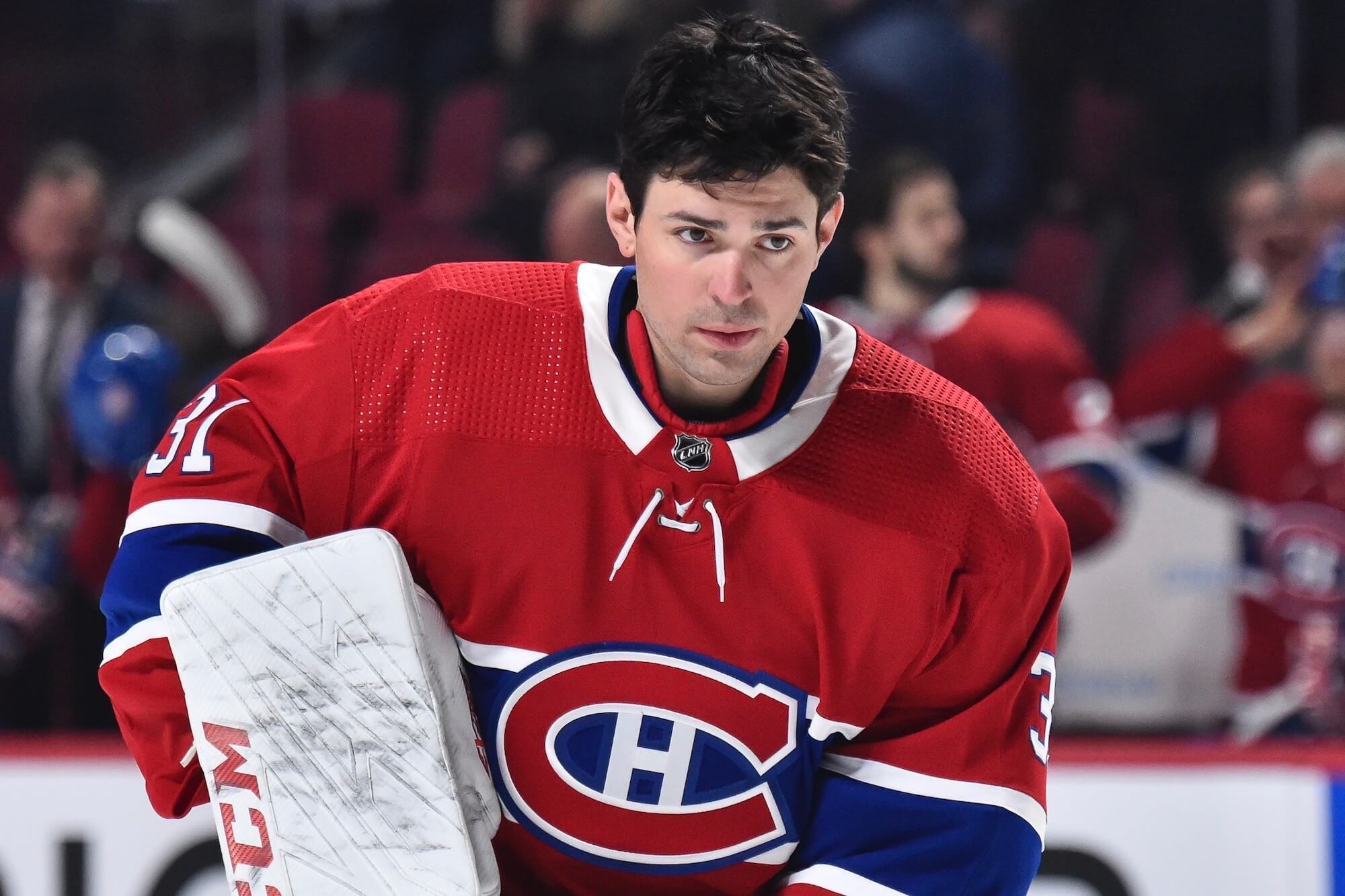 There's no telling when, where or even if the Penguins and Canadiens could meet in the Stanley Cup playoffs this summer.

But assuming they do -- and there's reasonable optimism to be found within the weekend's player vote approving a 24-team tournament that would align these two opponents in a best-of-five preliminary round -- then I'll also safely assume the following:

1. Carey Price will be awesome.
2. The Penguins will prevail, anyway.

Hey, it's been a while. I'm allowed to ease back into the prediction business.

Tackling the latter first: Montreal's no match. Not in any context, even this apocalyptic one. The Canadiens played 71 games in the regular season and won a grand total of 19 in regulation, dangling 10 points out of the final wild-card spot at the March 12 shutdown at 31-31-9. They'll get their top scorer back from IR in Tomas Tatar, but the other side gets Jake Guentzel, and that's no match, either.

No group of skaters that's got Tatar, Brendan Gallagher, Max Domi, Shea Weber and a couple others could fairly be called terrible, but it's equally fair to suggest that their place in the standings -- 24th overall and, thus, the worst team in this tournament -- is an accurate reflection of reality.

All else being equal, I'd take the Penguins in 2.5.

And yet, all else might not be equal. Because Montreal's player at the most important position hasn't had an equal for the better part of his career.

Check Price's goals-against average, and it's 2.79, good for 32nd in a 31-team league. His save percentage of .909 carries the same rank. To the distant observer, he appears to be no better than the team employing him. And as a result, his oft-cited elite status tends to come with no shortage of detractors.

I'm not one of them. I covered his first NHL victory -- Oct. 10, 2007, at the Civic Arena -- as well as his most prominent performance, for Canada's gold-medal entry in the Sochi Olympics in 2014, when he was Mike Babcock's unwavering choice from an all-universe pack. And all he's done over a dozen-plus NHL seasons around that is win the Vezina Trophy as top goaltender and Hart Trophy as MVP, both in 2015, and get selected to six All-Star Games while -- oh, by the way -- passing the legendary Jacques Plante a year ago for most victories for hockey's most decorated franchise.

Unlike Plante or Patrick Roy, though, Price hasn't exactly been surrounded by much in Montreal. As a result, he's appeared in only 60 playoff games against 682 regular-season games, and none since 2017.

Want to know who can tell the difference?

For that, always, always, always ask the participants. I've done that forever across all sports, and it never fails. They see, hear and feel detail we never could. They're informed of specific facets through coaches' films that we'd never know. And when assessing opponents, they'll be as fair and objective as anyone.

When I've asked the Penguins over the years, it's been Price. By a metric mile.

When the NHL Players Association conducted its annual survey of its membership earlier in this 2019-20 season, surveying 588 total players, the selection for the league's best goaltender went to Price with an incredible 41.55 percent of the vote. Marc-Andre Fleury was a remotely distant second at 8.93 percent.

Doubt the veracity of that?

Think the athletes maybe didn't invest much thought into it?

OK, try this: Best forward went to Connor McDavid with 68.35 percent, with Sidney Crosby a remotely distant second at 14.93 percent.

But when that same survey challenged players to choose "one player to have on your team if you had to win a single game," Crosby leapfrogged McDavid, 44.03 percent to 30.53.

So yeah, they were awake. And you'd better believe they know.

Price remains athletic as ever at age 32 and covers plenty of net at 6-3, 217 pounds, but neither of those traits mean as much, as people inside the game will attest, as his unrivaled combination of cool, confidence and technical brilliance.

That was evident again on a first-hand basis this past winter in three meetings with the Penguins: 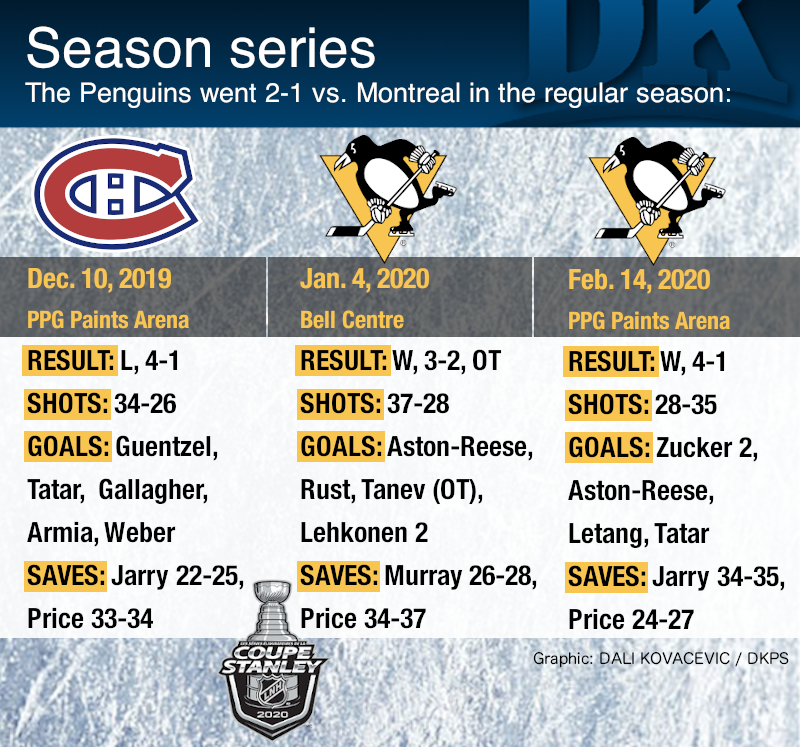 I rewatched all three games over the weekend, if only because ... my goodness, it was fun to watch three hockey games that might actually mean something toward the future, you know?

And I was reminded throughout, in seeking out examples of what Price does best, that it's seldom the super-splashy.

Here’s a save from the first of those meetings, the 4-1 Montreal victory:

I kid you not: Of Price's 33 saves that night, this might have been the most dynamic. That's how he rolls. His chief strength is squaring up the shooter in all settings and minimizing the chance he can be beaten by surprise.

Zach Aston-Reese gets off a dangerous one-timer up there. Quick release. A little lift. Ticketed for top-shelf glove side. But Price tracks John Marino skating behind the Montreal net, keeps the paddle down to guard against a wrap, then rises up -- shoulders, glove and all -- the instant the puck's out Aston-Reese.

Let’s go to the next meeting, up at Bell Centre:

This was a power play. Evgeni Malkin slides forward from the left point and whips a wrist shot. Price stops by again staying square and tall. Now lock onto the eyes of everyone involved. To my count, only two people know where that rebound went: Price and puck-sniffer Patric Hornqvist. But by the time Hornqvist pounces for what probably would've been a goal 99 times of 100, Price is ahead of him with the left leg pad.

And even that's not what's most impressive up there to me.

Watch it again, and this time just focus on Price's shoulders and glove. The violent jutting out of the left leg throws most goaltenders way off balance. It's a desperation move, so that's understandable. But Price still keeps the shoulders up, blocker up, glove up, in the infinitesimal chance that the rebound attempt could be elevated.

That, my friends, is what the players see that the statistics might not show.

Price didn't just make that save. He made so many other hypothetical ones on the same sequence.

A couple more from that meeting:

Jared McCann makes a wonderful dash into the Montreal zone, dancing through Jeff Petry, then Weber. If there were justice, he'd finish in style.

Price could over-commit, as some goaltenders are prone to do when a scoring chance materializes out of nowhere. He also could, sensing that Weber was diving back to minimize McCann's options, venture forward for a Fleury-esque pokecheck. He does neither. He instead plants himself atop his paint. And despite a low stance that cuts off the highest-percentage targets, he keeps the blocker up to reject what was actually a terrific shot by McCann.

Dude should've made every highlight reel for a month. Instead, it was right to a commercial and buried forever.

What's above is a two-on-none, essentially, in which Price is staring down none other than Malkin and the Penguins' top goal-scorer, Bryan Rust. And talk about a scoring chance materializing out of nowhere. This was a rapid-fire rush in which everyone in red is caught lagging.

Except Price. He respects Malkin's shot once the puck's on the forehand but also sees that Malkin never averts his vision from Rust. As such, a super-duper-slo-mo of this will illustrate that, as soon as Malkin angles his shoulders for the pass, Price's own left arm and shoulder begin heading toward Rust.

He doesn't just make the save. He smothers the rebound.

One more, from the final meeting, back home:

Goaltenders wear a fair amount of equipment, but the best ones still take pride in their feel for the puck. Matt Murray talks about this a lot. There's an extra sense for where the puck's just struck them, and a reflex -- because there's no time for anything more -- that corresponds.

There's poor McCann again, doing well to carve himself another partial break. This time, rather than high blocker, he tries a Crosby favorite in aiming for the vertical space under the glove and above the pad. It's never there. And actually, there's nothing there at any stage of this. Price might as well be covering the map of Quebec.

So, on one hand, Price might already be in McCann's head with the blocker. (Don't laugh. Forwards never, ever forget a save on a golden chance.)

And on the other, the part I really love, he shows that feel of the puck. The way the shot hits the top of his left pad, he momentarily glances toward the glove, thinking it might have gone in that direction. But then, clearly sensing the puck touching his stick blade ever so slightly, he reacts artfully with both the blade and his right leg to keep McCann from a second swipe.

Oh, and he lost these last two games I described, I should add. He loses a lot of games.

He'll lose to the Penguins, too.

But neither of those things mean he isn't the best.