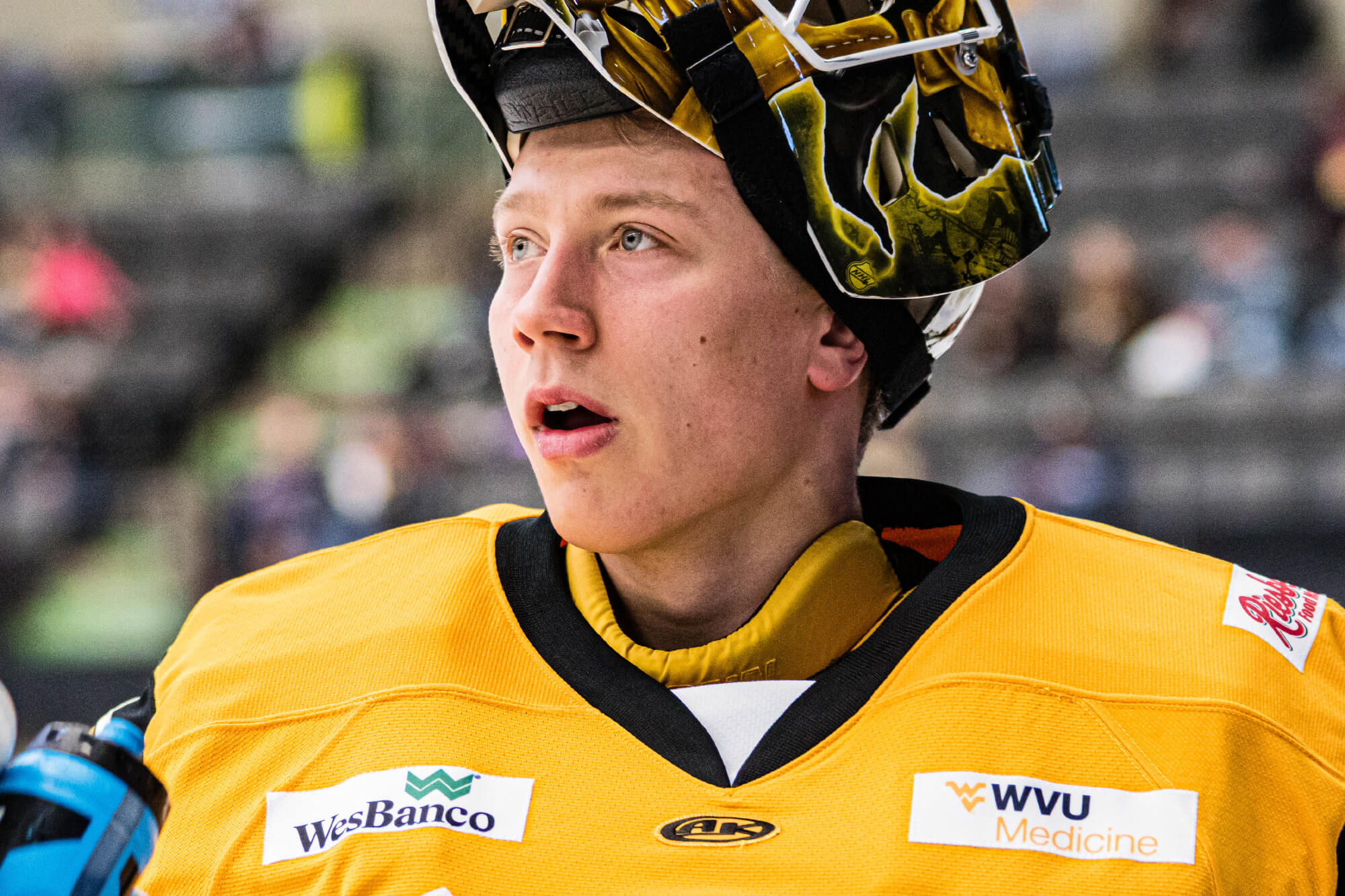 Emil Larmi didn't have the easiest journey to Pittsburgh.

I mean "journey," literally. His trip this week from Finland to Pittsburgh in order to join the Penguins for their expanded playoff roster was a four-day ordeal with a couple of failed attempts along the way.

"It was Wednesday, everything was supposed to be alright," Larmi told me of his trip after finally arriving in Pittsburgh. "I wasn't even thinking that they wouldn't let me go, I just went to the airport. You can travel to the U.S. from Finland, there are a couple of different visas, residents and something like that. But my visa wasn't on the list, I'm just not allowed to come."

Larmi explained the reason for the delay in his own way in an Instagram post that day: 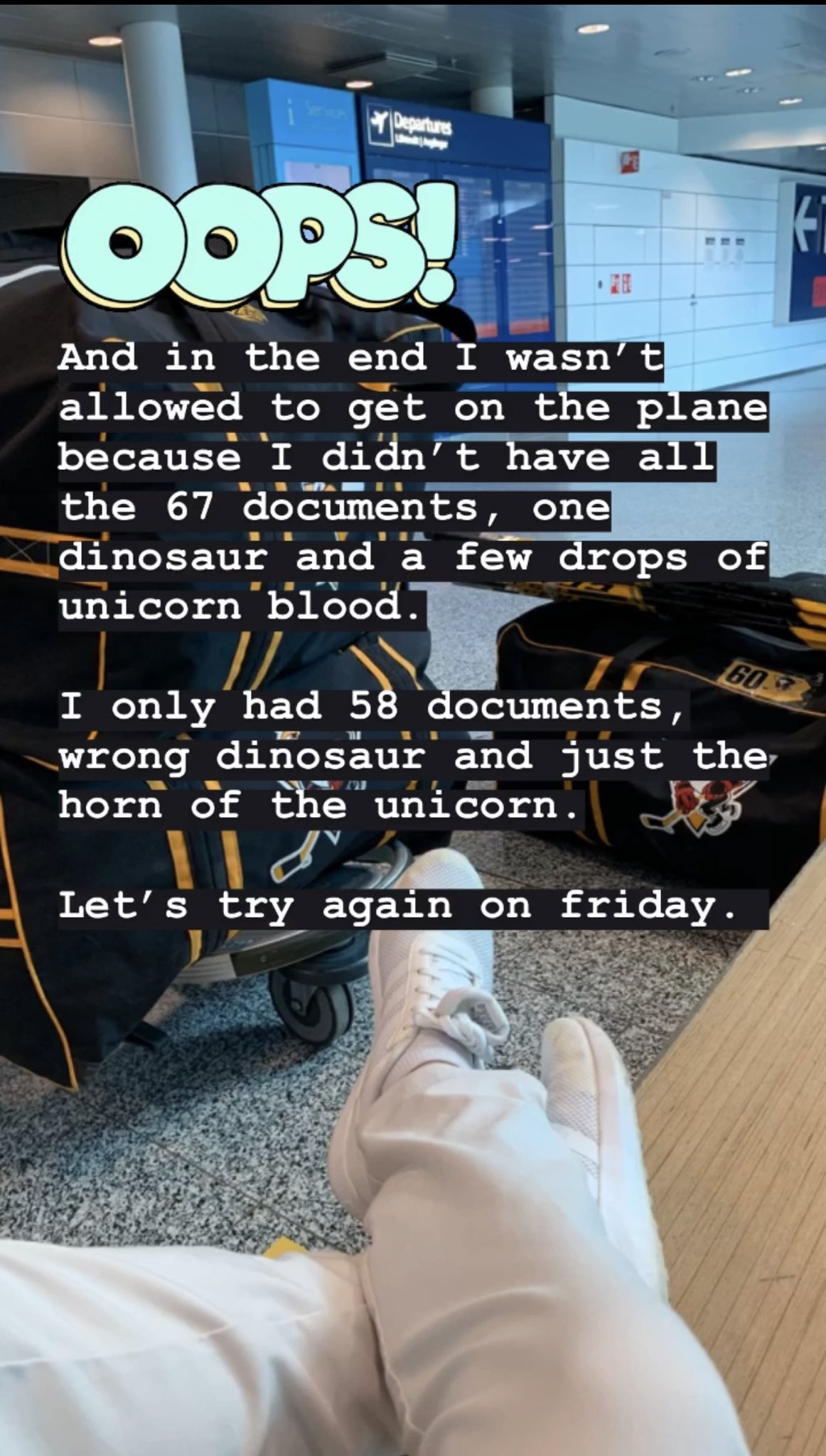 Stuck in Finland, Larmi called Penguins manager of team services Jason Seidling in what was the middle of the night in Pittsburgh.

"Everyone tried to work on it, and there wasn't anything they could do. It's been a long travel for (Seidling) as well," he laughed.

Larmi's next flight was booked for two days later, on Friday. Larmi isn't 100 percent sure what happened with the situation in those two days, but the NHL had to look into the issue, there was some emailing back-and-forth between the Penguins and Delta and U.S. Customs.

"It was the same story again," Larmi said. "The airline wasn't sure if they were able to let me go or not."

Larmi's third attempt at a flight was the following morning, so he stayed in a nearby hotel overnight, and he showed up the next morning prepared.

"I had tons of new papers, all the emails that the organization has with Delta, and it says on the email that I'm allowed to go," Larmi said. "I didn't even know what was going on anymore, I just hoped for the best. Then I finally made it."

Larmi had already had his share of ups and downs with air travel this season. He came to the United States early before training camp, and was training with Casey DeSmith and Tristan Jarry in New Hampshire. On the day they were supposed to fly back to Pittsburgh, Jarry drove himself and Larmi to the airport, with both parties assuming they were flying out of the same airport. They were not.

“That was Jarry’s fault,” Larmi laughed when telling me the story that training camp. “We got to the airport and looked at our flights, his was departing from Boston and mine was departing from Manchester. I took an Uber and made it.”

Then, in January, Larmi was recalled from Wheeling to Pittsburgh to back up Matt Murray in Montreal after DeSmith misplaced his passport. Larmi didn't have to play, but he got a nice trip to Montreal and an NHL paycheck for the day.

“It was a bit different,” he told me back in January of his one-day stint in the NHL. “One day I’m riding the bus, then next I’m on a first-class plane. Then I’m at the Bell Centre, and after that I’m flying with the team on a private jet. The hotel was nice as well, I wasn’t complaining about that.”

Larmi joked that DeSmith's misplaced passport might have been what was causing the problems trying to get back into the country this time around.

"Maybe the problem was that I was trying to use Casey's passport," he laughed.

Now that Larmi is finally in Pittsburgh, he is going to quarantine for 14 days in his hotel before getting back on the ice with Penguins players for their voluntary skates. He's looking forward to the small-group, informal setting of the skates.

"That's weird," he said of the informal skates. "Of course I've skated with a couple of guys, but when we aren't able to see any groups except the one we're with, that'll be weird. At least I'm going to be the only goalie on the ice. I'll get a lot of shots. It might be a good thing as well. It's weird, but it is what it is."

Larmi hasn't been on the ice at all since the season shut down in March, but has been able to keep up with his usual off-ice summer workouts. It hasn't been entirely unlike a typical offseason.

"I'm feeling good," he said. "It's a long time (off the ice), but that's usual. For example, last summer, well ... I can't even remember. Last summer is way too far away. But it's normal to be months without being on the ice. It's been like ... three months already? That's a long time. I probably can't play hockey anymore. We'll see."

During this break, goaltending development coach Andy Chiodo has been checking in with each of the Penguins' goalie prospects on a weekly basis over video chats, and Larmi has been able to go over his game films with Chiodo.

"We went through the last season and went through what he wants me to do over the summer and next year," Larmi said of Chiodo. "We see what's going on with my game, what I can do better, things like that."

For now, Larmi's focus turns to his role as a Black Ace on the Penguins' expanded playoff roster.

Larmi has championship experience under his belt already. He led his club HPK to a Liiga championship in 2019, and he won a World Junior Championship with Finland in 2016. This will be his first postseason experience of any kind in North America, and he's hoping to be able to grow from the experience as a Black Ace.

The travel mishaps and experience being a Black Ace during what is set to be the weirdest Stanley Cup playoffs in awhile will be a fitting end to Larmi's whirlwind rookie season in North America.

In his third start in Wilkes-Barre/Scranton in October, Larmi started to faint in the locker room during an intermission, he suspected due to a concussion sustained earlier in the period. After the health scare, he was out of the lineup for three weeks. After a rocky few starts following his return, he was assigned to Wheeling in December. His one-day stint in the NHL came two weeks later. In total, he played just nine games for Wilkes-Barre and 11 games for Wheeling before a global pandemic cut the season short.

"It was weird," Larmi laughed when reflecting upon this season. "Well, it was rough. It wasn't what I expected, but at least there's something to learn. It was rough. I just have to keep focusing on what's coming. At least it's fun to get back on the ice and practice with the NHL team. I'm still excited about the future."

While Larmi describes his rookie season as "rough," Wilkes-Barre head coach Mike Vellucci liked how Larmi responded to the adversity.

"Unfortunately for him, he’s had a tough year," Vellucci told me back in March. "But it’s not his fault. It was a difficult season how everything played out. We got Casey, it just changed the whole thing. He got injured after he had a great start. It was just one of those things, the poor kid couldn’t catch a break. It’s nobody’s fault, but where do we go from here? He just needed to get his confidence back. He went down to Wheeling and played really well. They were very happy with him, (Chiodo) was really happy with his growth. It was just a great learning experience for him."

"No passing out, no pandemic," he laughed. "I can take the NHL game again though. That's the one thing I'll take. Otherwise I hope to have a bit different season than this year."

"This whole season felt like five years! All the time something was happening," he said. "There wasn't any stable time when I was able to just do the normal things. When I came back to Finland after the season, that was the first time I was able to think about what happened over the last 10 months.