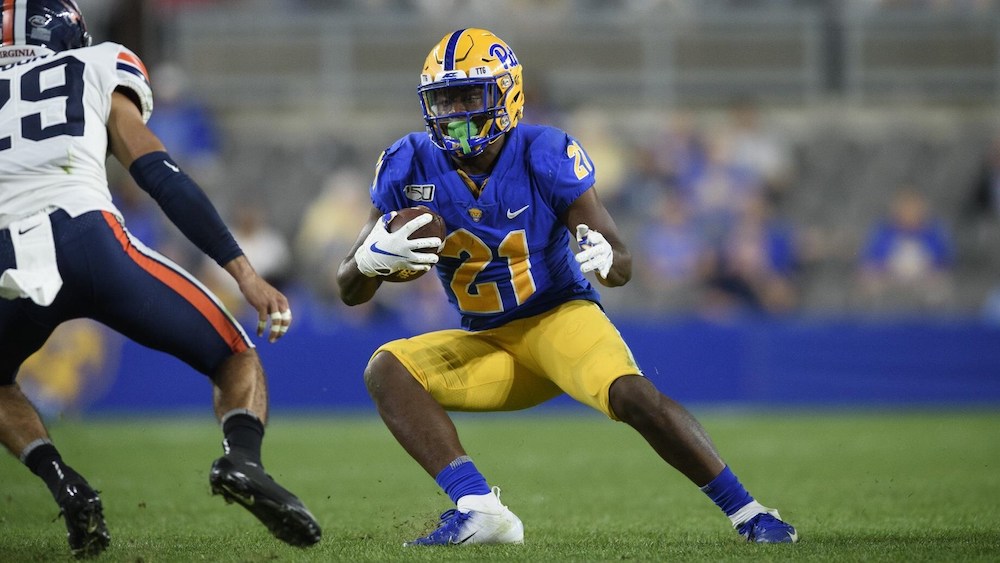 This is the second in a weekly series ranking the top starters or position groups in the ACC.

Todd Sibley already committed to Pitt in 2017 by the time the Under-Armour All-American game was played, and the recruiting win was seen as a big one for the Panthers.

A three-star recruit according to Rivals, Sibley held offers from Michigan and Ohio State. The recruiting website listed him as the No. 24 high school running back in the nation. He was a powerful, bruising runner -- the type Pitt has so much success with in recent seasons.

And he helped Pitt land another heralded running back.

A.J. Davis, another Under-Armour All-American selection that year, held a slew of offers. We're talking powerhouse programs such as Florida, Georgia, Auburn and Michigan. A four-star recruit, Davis announced his commitment to Pitt on ESPN2, and it sent the Panthers' coaching staff into a frenzy. Rivals listed Davis, a native of Lakeland, Florida, as the No. 14 running back in the nation.

It sure seemed Pitt had its next great running backs in place, the guys who would carry the tradition established by Tony Dorsett, Craig "Ironhead" Heyward, Curtis Martin, LeSean McCoy, James Conner and company.

Pitt still is waiting for Davis and Sibley to continue that tradition.

In 2018, the pair waited in the wings as Quadree Ollison and Darrin Hall topped 1,000 yards each in leading the Panthers to an ACC Coastal Championship. Last season, the first under pass-heavy offensive coordinator Mark Whipple, Davis and Sibley had opportunities along with freshman Vincent Davis.  The results were mixed.

As a junior, A.J. Davis led Pitt with 530 yards (4.2 average) to go with four touchdowns. Sibley, who will be a redshirt junior, rushed for 249 yards and no scores, while Vincent Davis posted 314 yards with five touchdowns and showed the most burst among the team's top three backs.

Injuries played a role. A.J. Davis missed games against Delaware and Duke because of injury. His best game came against Syracuse, rushing for 103 yards on 16 carries. He also was a factor in the passing game with 23 receptions for 269 yards, including seven for 94 yards against Penn State.

Sibley rushed for 106 yards against Delaware, but was hurt in the fourth quarter against Miami and did not travel to Virginia Tech.

Vincent Davis, listed at 5-foot-8, 175 pounds, missed games against Duke and Delaware, but emerged late in the season. He rushed for a team-high 69 yards in the Quick Lane Bowl win over Eastern Michigan, and his 61-yard touchdown against Georgia Tech was Pitt's longest run of the season.

The play of the offensive line, which allowed 76 tackles for loss, also contributed to the running game's struggles. But Pitt will need more from its running backs in 2020 to be mentioned among the ACC's best.

This is as much a no-brainer as Tigers' quarterback Trevor Lawrence topping last week's list.

Many believe Etienne is college football's best running back, and the hype is warranted. The explosive, dynamic playmaker is a factor in all phases of Clemson's offense -- he finished last season with 37 receptions for 432 yards -- and he gives Clemson two preseason Heisman Trophy hopefuls. Etienne rushed for 1,614 yards and 19 touchdowns, and he averaged 7.8 yards per carry as a junior.

Opposing coaches must have quivered when the 5-10, 210-pound Etienne opted to return for his senior season.

At 5-9, 182, Hawkins isn't a big, bruising runner, and he didn't come to Louisville with the pedigree of Etienne, but, man, did he put together a monster redshirt freshman season.

Hawkins rushed for 1,525 yards and nine touchdowns while averaging 5.8 yards per carry in 2019. One of the top freshman runners in college football last season, Hawkins dazzled with his speed and explosiveness. One of the top athletes in the ACC, Hawkins reportedly has been measured with a vertical jump of 40.6 inches and 4.36-second speed in the 40-yard dash.

About the only knock on Hawkins is his production in the passing game. He had just four receptions last season.

Carter has been productive, rushing for 1,003 yards last season and never going below 558 yards in his first three seasons. He's multi-dimensional. With 21 receptions last season, Carter has 57 in his Tar Heels career. And, because North Carolina also features Javonte Williams, Carter isn't subject to the wear and tear other top running backs face.

Heck, Carter even handled kickoff-return duties for North Carolina, and his production is a reason why the Tar Heels are being viewed as a favorite in the Coastal Division.

With ACC rushing champion A.J. Dillon in the NFL with the Packers, Bailey gets his opportunity to be the Eagles' bell cow.

But expecting numbers approaching the 1,685 yards and 14 touchdowns Dillon put up in 2019 probably isn't fair, not with Jeff Hafley in his first season as head coach. A former Pitt assistant from 2006-10, Hafley will seek more offensive balance.

Still, Bailey is big (6-1, 240) and rushed for 844 yards and seven touchdowns in a backup role last season. And behind an experienced offensive line, Bailey should be in line for a big season.

Other ACC backs have better career production, but the guess here is Mason is a strong candidate for a breakout season.

The Yellow Jackets struggled offensively in 2019, but Mason's 899 rushing yards, seven rushing touchdowns and 5.2 yards per carry accounted for 49.1 percent of the team's rushing output. At 6-1, 219, Mason has the size to break tackles, and the junior will be pushed by highly-touted freshman Jahmyr Gibbs.

Nicknamed "Bam," Knight is the lead in a 1-2 backfield punch with Jordan Houston. Less dynamic and athletic than Houston, Knight is a candidate to hit 1,000 yards this season after going for 745 with five touchdowns a year ago.

Knight isn't a game-breaking athlete, but he runs with power and purpose.

Harris was a heralded recruit, but the 5-10, 205-pound junior has yet to distinguish himself in the Hurricanes' backfield.

Last season, Harris split carries with DeeJay Dallas -- Dallas finished with 115 attempts; Harris totaled 114. He should be Miami's featured back this season. A threat in the passing game, Harris rushed for 576 yards and five touchdowns last season. Expect those numbers to increase significantly.

Dixon probably figured he would be the Tigers featured back in 2020, but when Etienne opted to return, those plans changed.

The 5-10 junior is a big-play machine, averaging 8.8 yards per carry as a freshman and 6.1 last season. His 11 touchdowns in two seasons as a backup further proves how much talent is on Clemson's roster. Dixon also figures into the passing game, finishing with 14 receptions in 2019.

He'd definitely be a starter for several ACC teams.

The other half of the ACC's most productive backfield in terms of rushing yards, Williams rushed for 933 yards and five touchdowns for the Tar Heels. Williams (5-10, 215) has the size, and his 17 receptions prove he's a consideration for quarterback Sam Howell.

Walker spilt time last season with Cade Carney, but with the latter out of eligibility, the Demon Deacons will turn to the 5-10, 200-pound sophomore to be the featured back.

Walker displays patience and big-play ability, including a 96-yard touchdown run -- the longest in Wake Forest history and an ACC best in 2019. He had nine carries of 20 yards or longer came on 98 attempts. He'll need to become a bigger factor in the passing game, as he finished his freshman season with three receptions.

Share
Tweet
Email
Live Qs at 5: Dale’s answers on the Steelers, anything else
Class of 2022 search rekindles for Pitt’s Capel