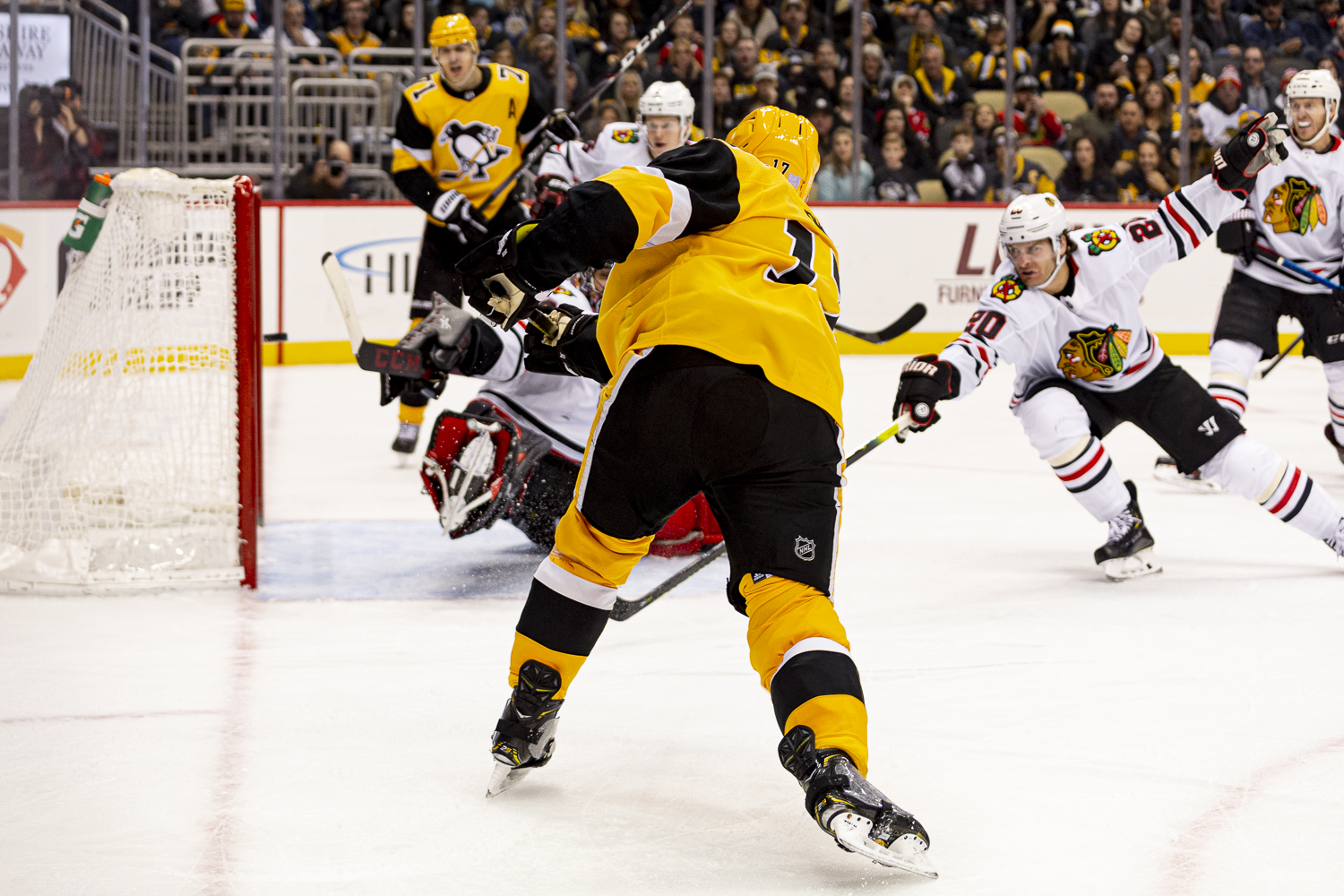 With a 3-2 shootout win over the Blackhawks, the Penguins have now rallied from multi-goal deficits in three straight games, winning the last two. The rally came with no help from the ailing power play, which extended its scoreless streak to 26 consecutive failed opportunities after failing to score on three power play attempts on Saturday.

The win also snapped the Penguins' 10-game losing streak against the Blackhawks, their first win since the meeting on March 30, 2014, a 4-1 win in which Lee Stempniak scored the game-winner. The only Penguins from that last win who were also in Saturday's game were Sidney Crosby and Olli Maatta. The former left the game early with a lower-body injury, and the latter was wearing the white of the visiting team instead of gold this time around.

The Penguins had the first power play opportunity in the game when Patrick Kane was called for tripping at 19:24 of the first period, and deployed a power play unit of Justin Schultz, Marcus Pettersson, Evgeni Malkin, Jared McCann, and Bryan Rust to finish the period, separating Crosby and Malkin as had been done in Friday's practice.

Goals from Dominik Kubalik and Kane 1:38 apart had the Penguins in a 2-0 hole at 8:47 of the second period. Three minutes later Ryan Carpenter was called for slashing and the Penguins were on their second power play of the game. Crosby and Malkin were reunited on the top unit along with Bjugstad, Guentzel, and Schultz. Yet again, the power play came up empty.

Those two power plays, combined with another early in the third period on a Dylan Strome tripping call, produced a total of two shots on goal. Two. It wasn't that their shots were going wide or getting blocked, either. They only even attempted three combined shots on the power play, with that third attempt being blocked. And as the heat map illustrates, those two shots on goal weren't exactly from the high-danger areas of the ice: 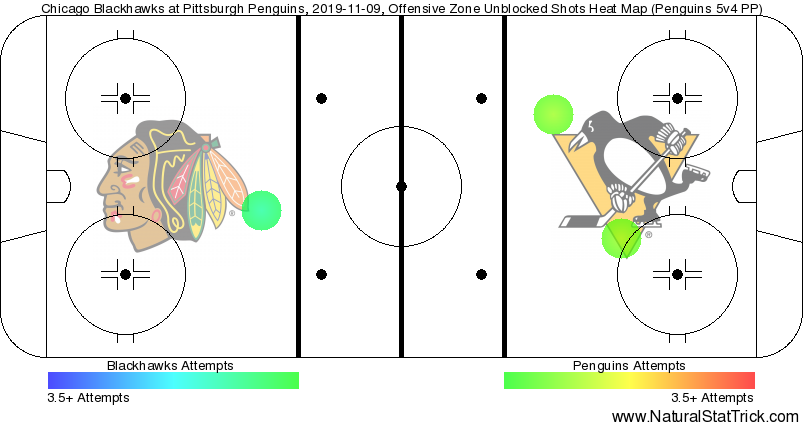 Seriously, the Penguins attempted 40 shots in 51 minutes during five-on-five. They had three attempts in six minutes of power play time. Their offensive pressure dropped 28 percent by going on the power play. If the Blackhawks really wanted to shut the Penguins down, they should have kept racking up the infractions.

"We have a lot of good players that have had a lot of success on the power play for a long time," Mike Sullivan said. "We have a lot of different combinations, guys coming in and out of the lineup ... The one thing I will say is we haven't had a net presence as consistently in the last handful of games, probably since Patric Hornqvist got hurt. That's one thing he brings to our power play that's important. You have to make it tough on the goalie. You have to take sight lines away, you have to limit his mobility just by being in around the crease."

Sullivan also said that they'd like to see the players return to relying more on their instincts on the power play, as opposed to overthinking things, which tends to happen when a streak like this is happening.

Guentzel didn't have an answer when asked what was ailing the power play after the game.

With no help from the four minutes of power play time in the second period, Guentzel got the Penguins on the board with just under four minutes remaining in the middle frame. Malkin's patience on the play was great, waiting until he baited Corey Crawford as far as possible to the right side of the cage before making the pass to Guentzel:

"It was an unbelievable pass," Guentzel said of the feed from Malkin.

Midway through the third period, Rust evened the score off of a beautiful pass from John Marino:

"I was trying to scream pretty loud there," Rust said of calling for the pass from Marino. "It was pretty loud in there, I don't know if he heard me or if he just had his head up and made a really nice play. Either way it was an unbelievable pass."

In the waning minutes of regulation, officials missed a blatant tripping call from the Blackhawks on Brandon Tanev, drawing the ire of Tanev and the other players on the ice. But given the way the previous three power plays went, the officials probably did the Penguins a favor.

The Penguins outshot the Blackhawks 5-2 in the scoreless five-minute three-on-three overtime period, and the game went into a shootout, the first of which for the Penguins this season.

Guentzel scored on the first attempt, and Blackhawks captain Jonathan Toews was unable to summon all of his leadership abilities to will the puck past Murray on his attempt. Malkin was stopped in the second round, and Kane scored on his shot to even the score. Jared McCann scored in the third round, and Murray stopped Alex DeBrincat to seal the win.

It wasn't the prettiest win, especially with Crosby being lost to injury after the opening shift of the third period, but yet another comeback showed the resiliency of the group.

"It shows what kind of character we have on this team," Guentzel said of the rally. "Not the second period we wanted, but to come out and get two points there is huge."

"It shows a lot of character," Rust said. "We're really not making it easy on ourselves. ... We do seem to have a pretty good leadership group in here, and we do just know when to push a little bit harder."

Share
Tweet
Email
Crosby hurt, but seen leaving arena without much issue
U.S. women in ‘disarray’ in sweep by Canada