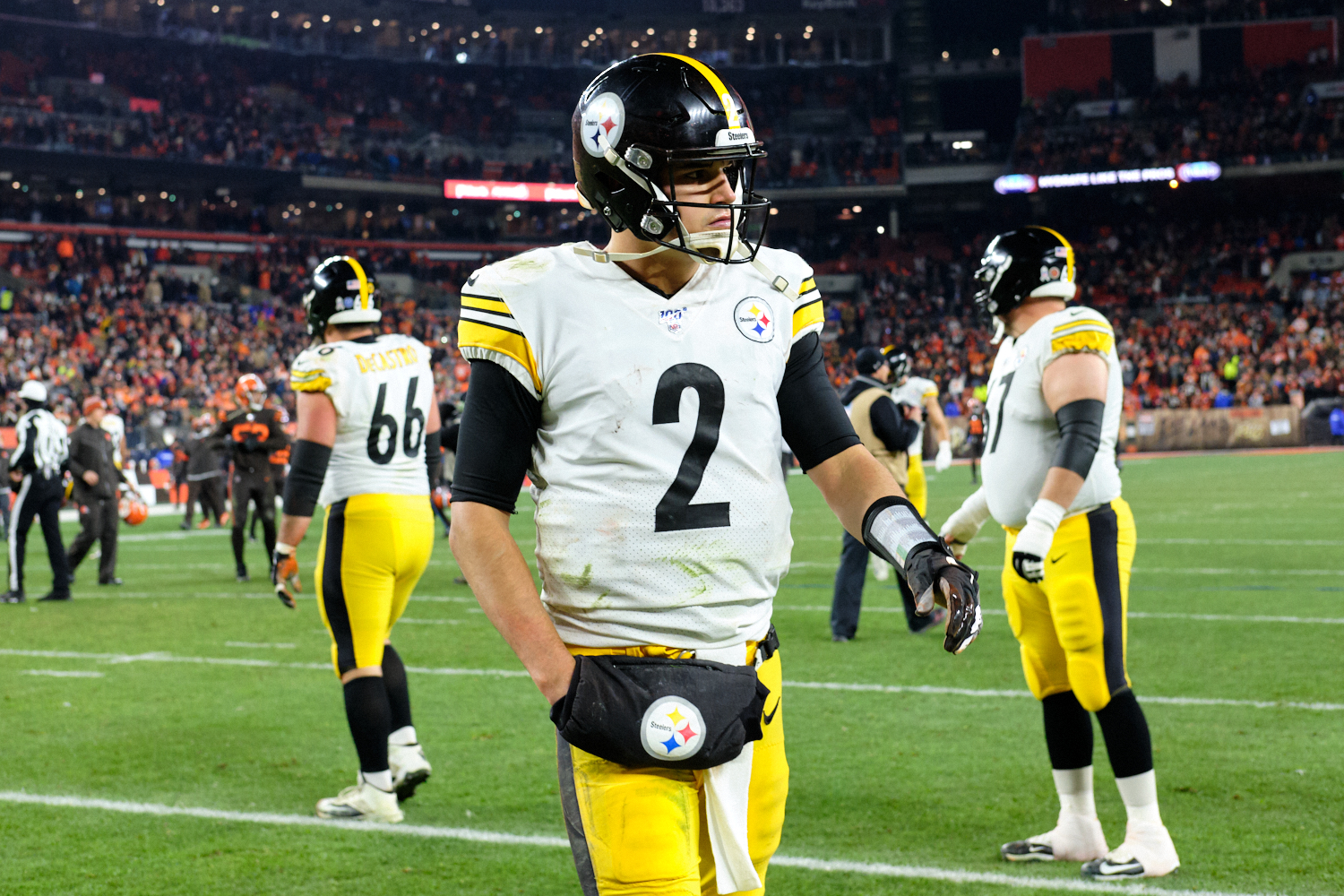 CLEVELAND -- Thursday night have the look of a Steelers-Bengals game?

It sure did from my vantage point at FirstEnergy Stadium, especially the end of it. But it was headed that way long before Myles Garrett lost his mind -- a situation to which the league responded to Friday, swiftly and appropriately.

The Steelers have something the Browns want -- a winning culture. They have a history. They have a method and a plan that allows them to compete even when things seem at their most bleak.

The Browns? They've got years and years of losing floating upon the tears of their fans.

That brings me back to the Bengals.

When the Steelers and Ravens were going back and forth winning the AFC North and Super Bowls, things often got nasty. The games were hard fought and physical. Things got heated. The two franchises didn't like each other because they were the thing standing in the way of the other reaching the top of the mountain. But they respected each other -- for the most part.

The Bengals? They were never a true contender for the ultimate goal, the Super Bowl. Sure, they'd win a division title every once in a while. But once the playoffs started, they did the same thing time and again -- they lost.

And they lost because they didn't know how to win. Oh sure, they could win a game here and there. But they couldn't do it when it mattered most. That was when they'd do something so obscene they'd find a way to extract defeat from the jaws of victory. See playoff game, Jan. 9, 2016, as an example.

Why did those things happen?

Which brings us back to the Browns.

Freddie Kitchens is taking some heat for what happened on the field at the end of Cleveland's 21-7 victory over the Steelers. That's fine. He's the head coach. And he did, after all, say in training camp after the Browns got in bunch of fights with the Colts in a joint practice that his team, "wouldn't back down from anyone."

That's akin to giving the players the green light to do whatever. It's why the Browns have looked completely undisciplined this season, committing 87 penalties, three more than the Cardinals for the league lead.

They are equating taking personal fouls and other penalties with toughness. That's why, when Garrett ripped the helmet from the head of Mason Rudolph and assaulted him with it, his teammates cheered from the sideline.

Wildest thing I ever saw. Was 10 yards from it. Myles Garrett completely lost it, connected the helmet square on Mason Rudolph’s head. And the Browns were celebrating the whole thing from the sideline.

It was akin to the Bengals' celebrations with Burfict over the years.

It's what teams with poor character do. They don't understand what it takes to win. Or more importantly, what it takes not to lose.

Which brings us to the person ultimately responsible for Thursday night's events: John Dorsey, the general manager. Dorsey, you'll recall, was in charge in Kansas City when the Chiefs brought in questionable characters in the name of winning, including running back Kareem Hunt.

Since joining the Browns as GM -- after being fired by the Chiefs for questionable management tactics -- Dorsey has done the same thing, bringing in questionable characters, trying to cut corners in the name of winning. That included signing Hunt when nobody else would touch him after multiple violent incidents that caused the league to suspend him for the first 10 weeks of this season.

The Browns are a reflection of their management. Management thinks it can cut corners to win. The players think acting tough in a game, taking cheap shots and stupid penalties, makes them look like a team that won't be bullied.

Instead, they will spend the rest of this season answering for their ridiculous actions, built upon a culture of nothing.

A winning culture can't be bought. And it can't be faked. The Steelers have it and the Browns proved once again that they don't. And they have no idea how to get there.

• The "Hot Takes" guys like to take controversial stands on things. But I can't imagine looking at what happened late in this game and trying to blame Rudolph for Garrett's decision to try to bludgeon the quarterback with his own helmet.

That's like two guys getting into an altercation on the playground and one guy pushes the other, who then pulls out a weapon and tries to kill him. That's what could have happened in this situation. And the league is damned fortunate it didn't.

The NFL got it right on this one with Garrett's indefinite suspension. He'll have to apply for reinstatement, which will probably include some caveats that have him attending some anger management classes. After all, earlier this season he was disciplined for taking a swing at Titans' tight end Delanie Walker. He's no angel.

• I applaud Maurkice Pouncey for coming to Rudolph's defense. It's what I would have done, as well. But he also stepped over the line. Kicking a player when he's down -- as Pouncey did to Garrett -- can't happen. Pouncey deserved a suspension for his actions. And he got three games. If you look at that part of it as a stand-alone incident, that was deserved.

It also wouldn't surprise me if his appeal is heard and his suspension is reduced to two games, which would still keep him out of the rematch with the Browns in two weeks.

•  Rudolph wasn't good Thursday night. It was easily his worst game. But let's not pretend that four-interception games don't happen to everyone. After all, Ben Roethlisberger has three such games in his career.

I'm not comparing Rudolph to Roethlisberger at all. And maybe that's the thing some people are struggling with right now. They're expecting Rudolph, in his first season as a starter and second year in the league, to be Roethlisberger, a Hall of Fame quarterback. That's just not realistic. He won't be that guy right now. He might never be that guy.

Thing is, they don't have to know that yet. The Steelers aren't going to take a quarterback in the draft in 2020. Maybe they'll take one in 2021. But that decision hasn't been made yet because it doesn't need to be.

• As much as anything, the Steelers' offensive issues are about a lack of playmakers.

They're ridiculously young at the skill positions. Rudolph, as mentioned, is in his second season and just made his seventh career start. JuJu Smith-Schuster is in his third season. He'll turn 23 next week. James Washington is in his second season. Diontae Johnson is a rookie. James Conner can't stay on the field and the running backs behind him don't have 100 career combined carries.

Roethlisberger would be having his issues with this group. Would the offense look better? Probably. But we won't know that for sure until 2020. And even then, these guys will all have another year of experience under their collective belts.

• Even at that, expect the Steelers to make a move or two given their injuries. It might not be at running back. Benny Snell could be ready to come back as soon as Week 12 against the Bengals. But receiver has been and continues to be an issue.

Johnny Holton caught his first pass of the season in this one after failing to catch a ball on his first 12 targets of the season. And that was on his seventh target of this game. Holton has been very good on special teams — he's been a very good gunner on special teams. And with Artie Burns -- the other gunner -- suffering a knee injury against the Browns, the Steelers might not be able to afford to move on from Holton. That's especially true with both Smith-Schuster and Johnson heading into concussion protocol.

Even if they feel good about the potential for Smith-Schuster and/or Johnson to be cleared by next weekend, with the protocol, you just never know.

So what do they do?

Bringing back Eli Rogers probably makes the most sense now. Rogers is strictly a slot guy, but with both Smith-Schuster and Johnson questionable, at best, a slot receiver who knows the offense would be a welcome addition.

• Everyone is blaming the run-game issues on the offensive line. But it's never been a line built to drive people off the ball. This line was built to protect Roethlisberger, who would get the Steelers into good plays at the line of scrimmage. It's built around mobility and pass blocking.

The Steelers could be doing a better job in run blocking. But it also wouldn't hurt to have backs who hit the hole more quickly. The coaches obviously don't trust Jaylen Samuels in pass protection. Trey Edmunds was out there as an extra blocker -- not that he did a great job of blocking. And they can't use 195-pound Tony Brooks-James because of that, even though he's the fastest of their backs.

To me, adding talented speed, whether it be at running back, receiver or even tight end, is the team's biggest need in the offseason. That becomes more apparent with every game.

• The defense was due for a "bad" game. And if that loss is as bad as it gets, the Steelers will be just fine. The Browns had 293 total yards. They were 6 of 16 on third downs. They averaged 4.3 yards per play. The defense missed some opportunities for sacks and big plays. Unfortunately, it didn't make those plays.

Given what the Steelers had on the football field for a large portion of this game once Conner and Smith-Schuster were no longer out there, that wasn't good enough. But it almost was. And that was because the defense was keeping the Browns off the board, even if it wasn't forcing turnovers or getting sacks.

• There seems to be a prevailing notion that somehow the Steelers are deficient overall on special teams. But FootballOutsider.com's rankings going into Week 11 -- which don't include Thursday night's game -- have the Steelers at 15th overall in special teams play this season.

That's certainly not great, but it's not bad, either, especially after finishing 27th in that same metric last season.

A big part of that has been their kicking game, when either Chris Boswell or Jordan Berry take the field. Both have been very good this season. But it was Berry's inability to get the ball cleanly on the ground against the Browns that led to a miss for Boswell, just his second of the season and first inside of 50 yards.

How different might this game have been had that kick been good?

We won't ever know, but if the Steelers had scored to make it 14-10 as opposed to 14-7, after being shut out in the first half, the game would have had a different feel.

• It can't be overstated how much the Steelers' offense was hamstrung by having three players -- receiver Tevin Jones and Edmunds and Brooks-James -- who were on the practice squad for the majority of this season. In fact, Jones was activated from the practice squad Thursday and wound up playing the most snaps of them all.

That affected the offense greatly.

Wait, you might ask, haven't those guys been on the roster all season?

Sure. But their practice time, when on the practice squad, consists of largely running the offense of that week's opponent. They are way down the pecking order when it comes to running the Steelers' offense. Yes, they sit in the meetings for their position group, but seeing something in the classroom isn't the same as repping it week after week.