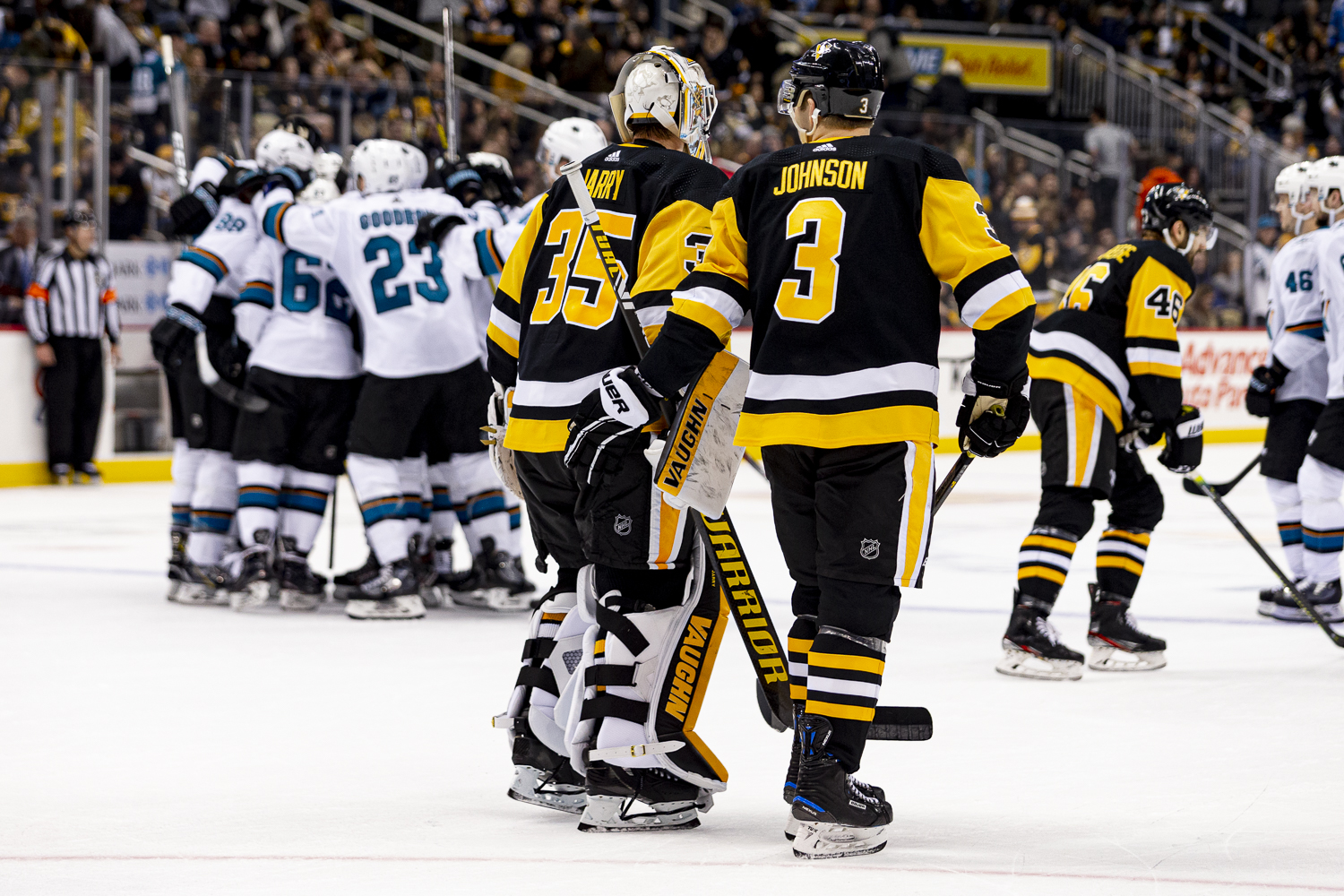 Sharks vs. penguins is one of nature's great mismatches. The ones with the fins and multiple rows of teeth cover the spread pretty much every time.

And so it has been lately in the NHL, too.

During the regular season, anyway.

As evidenced by their 3-2  overtime loss at PPG Paints Arena Thursday night, it doesn't much matter how much -- or how little -- the Penguins do well when they face San Jose. More often than not, they end up as so much chum for the Sharks, who now own three consecutive victories against them and have won four of the past five meetings.

Oh sure, the Penguins fared pretty well in that little six-game get-together they had with San Jose back in the spring of 2016 -- well enough that they held a parade to celebrate it -- but the Sharks generally find a way to leave the rink with a couple of points when they meet during cold-weather months.

Brent Burns provided their margin of victory in the most recent exchange of hostilities by scoring a power-play goal at 2:02 of overtime, hammering a slap shot through a screen and past Tristan Jarry from the slot while Kris Letang looked on from the penalty box, where he had been sent for an ill-considered trip of Logan Couture.

While the Sharks are 18-21-3 and would need the Hubble telescope to make visual contact with the Western Conference playoff field, almost any team is dangerous with a four-on-three power play.

And when that team can send out a foursome including the likes of Burns, Joe Thornton and Evander Kane, the chances of its power play actually lasting the full two minutes fall somewhere between minuscule and microscopic.

"They made a good play, by a bunch of good players," Mike Sullivan said. "It was a heck of a shot, and they got a good screen. ... It's just a tough situation when you have to kill two minutes of four-on-three."

Letang's tripping minor, it must be noted, was not the Penguins' only costly mistake on this evening; it simply was the one that sent the crowd of 18,620 streaming to the parking lots.

On '80s Night at PPG Paints Arena, their puck management during the first period sometimes seemed like an homage to the clubs that ushered in the darkest period in franchise history.

They allowed, by Sullivan's count, three two-on-one breaks before the first intermission. That's a bad night for most teams and a bad month for these Penguins, who have been so fundamentally sound and responsible for most of this season.

"That's not something we've done a whole lot of," Sullivan said. "I don't think we've given up three two-on-ones in the last 10 games. And that's the type of game we have to play."

One of those odd-man breaks made San Jose's second goal possible, as John Marino threw a poorly placed pass to defense partner Marcus Pettersson, who was unable to corral the puck. Patrick Marleau pounced on it, and set up Couture for the goal that broke a 1-1 tie at 17:51 of the first period.

Although the Penguins actually gave up more shots in the second (10) and third (11) periods than they did in the first (8), they were far more sound defensively after the first intermission.

"I thought we regrouped after the first, played pretty solid and didn't give them too many opportunities," Jack Johnson said.

The Sharks were fairly stingy, too. They packed the area in front of goalie Aaron Dell with bodies, with the intent of limiting the Penguins' close-range and second-chance scoring opportunities.

It was clear that even with Sidney Crosby and Jake Guentzel in street clothes, San Jose respected the Penguins' ability to generate offense.

"We still have plenty of guys who can score, even with all of our injuries," Johnson said.

The Penguins maintained offensive pressure throughout the game -- "We were taking what the game gave us," Sullivan said -- and finished with 38 shots, but the only two that eluded him came from Patric Hornqvist.

He exploited a Mario Ferraro giveaway for his eighth of the season exactly one minute before Couture scored, and converted a Bryan Rust feed for No. 9 at 19:09 of the second.

The second of those secured one point for the Penguins, and they played well enough for much of the game to earn another. They adhered, for the most part, to the formula that has allowed them to survive injuries that, by any reasonable standard, should have done irreparable damage to their playoff prospects.

That, of course, has not happened. Not yet, anyway.

"We played really well," Hornqvist said. "That's been our story the whole year. We've had guys in and out of the lineup, big guys, and we still find a way to play good hockey. We stick to the details and play hard for each other. If you do that in this league, you give yourself a chance to win every single night."

Even when it doesn't seem like it's nature's way.