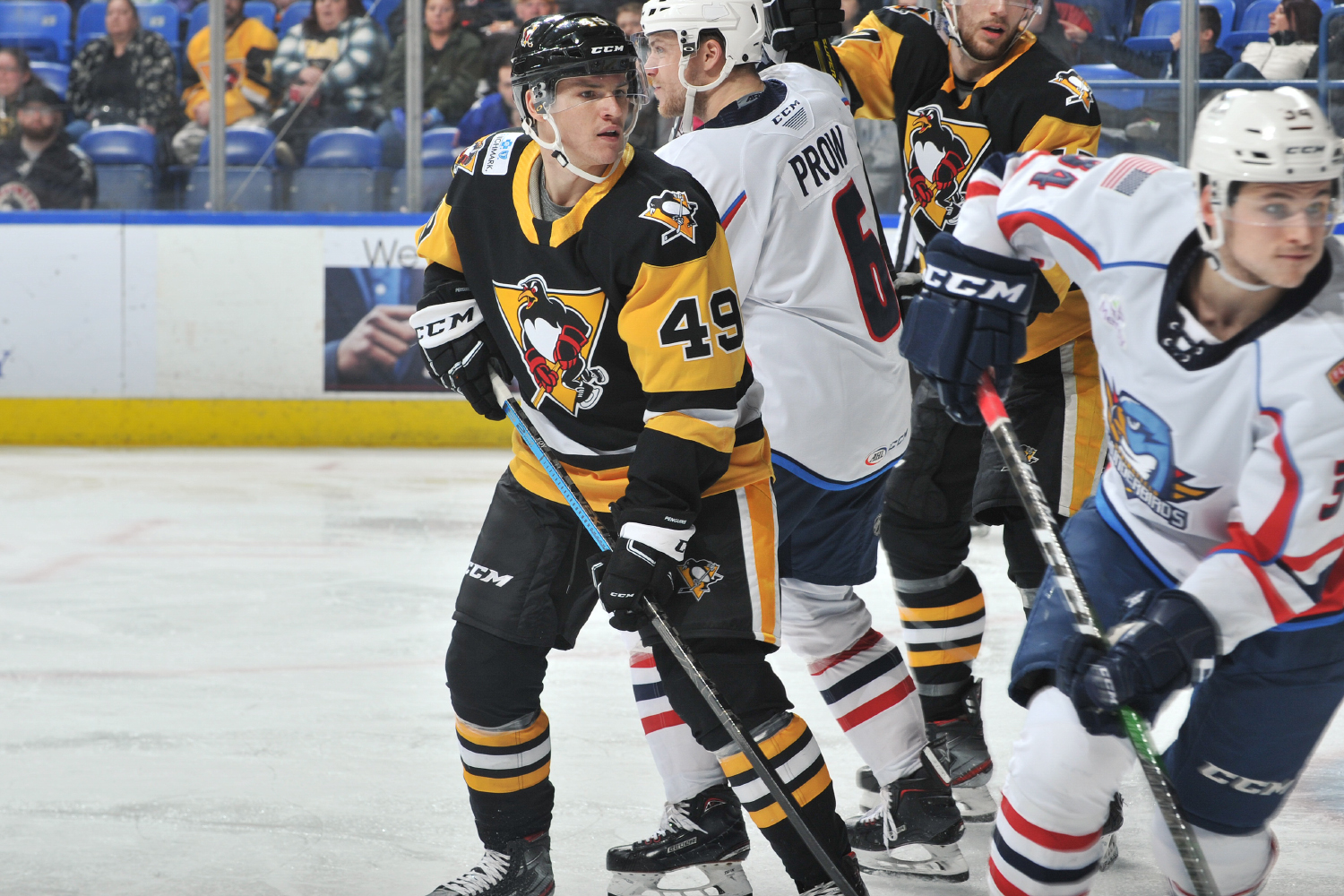 In December, the Penguins acquired left wing Kevin Roy from the Florida Panthers in exchange for forward Ryan Haggerty.

The trade accomplished two things. Moving Haggerty was a step toward getting Wilkes-Barre/Scranton under the AHL's veteran player limit. In the process, the Penguins were able to add a good, young forward with some NHL experience under his belt.

Roy, 26, was the Ducks' fourth-round pick in 2012, drafted out of the Lincoln Stars where he was teammates with Zach Aston-Reese. He spent the next four seasons at Northeastern University, where he was again teammates with Aston-Reese for another three years. He captained Northeastern his senior season as the team won the Hockey East Championship.

Roy, a native of Greenfield Park, Quebec, chose to go the college hockey route rather than play in the QMJHL.

"I was always good in school," Roy told me. "As a family, we didn't find any reason to just put school aside. It was becoming more popular, a lot of players coming out of college and having success at the NHL level. Having a degree in the back pocket, you never know what could happen or how long it lasts. It was never really an option to just put school aside. So we combined both and used hockey to just use the best education possible and live out your dream to play hockey for a living."

Roy turned pro in 2016, and spent the last three seasons in the Ducks organization. He played 125 games with the Ducks' AHL affiliate San Diego Gulls, scoring 31 goals and 57 assists. He made his NHL debut with the Ducks in 2017-18, and played in 25 NHL games that season, scoring six goals and one assist. He was limited to just three NHL games and 11 AHL games last season with an injury.

Roy signed with the Panthers over the summer, and began the season in the AHL with the Springfield Thunderbirds, where he scored four goals and 10 assists in 23 games. On Dec. 17, he was traded to the Penguins and assigned to Wilkes-Barre.

"I was very excited to join this organization, having this great opportunity here with the Penguins," Roy told me of his reaction to the trade.

Now that Roy has been in the organization for a few weeks, his early impressions of his new team are good.

"The organization is awesome," he said. "It's really welcoming, a very good setup here. I think everything is there to succeed. It's an organization that treats players really well and helps players find their game, move to the best league in the world and find success there. I think that's very exciting."

After eight games in Wilkes-Barre, Roy has one assist and is still searching for his first goal. He's playing on the left side of the top line, alongside Andrew Agozzino and Anthony Angello.

Roy is described in various scouting reports as having great speed, and being an exceptional passer with a good hockey IQ. In describing his own strengths, he points to his vision and playmaking.

"Offensively, I can make a lot of plays. I can create space for my linemates, I see the ice pretty well," he said. "I'm good around the net, good hands to give myself some time and space to make plays."

Roy is a little on the smaller side at 5-foot-10, 175 pounds. He thinks his size, coupled with his skating ability, can be a benefit at times.

Since Roy has already had a taste of NHL action, he has the advantage of knowing what he exactly needs to work on in his game to stick at that level.

"I think being consistent every night and consistent in all three zones, throughout the game," Roy said. "Take care of the puck, and the rest will take care of itself if you're playing the right way."

At the rate Penguins forwards are dropping, it wouldn't be out of the ream of possibility for Roy to find his way back to the NHL in the Penguins organization soon.

• Forward Graham Knott was re-assigned to Wheeling on Jan. 2.

• Forward Thomas Di Pauli was recalled by Pittsburgh on Jan. 3.

• Forward Cole Cassels was signed to an AHL contract on Jan. 4.

• Defenseman David Warsofsky last played on Dec. 13 and is dealing with a groin injury.

• Agozzino will be the Penguins' representative at the AHL All-Star Classic this month. More on that here.

• Dec. 31: vs. Springfield, 5-4 shootout loss
Sam Miletic opened the scoring 7:38 into the first period with his seventh goal of the year, then Agozzino extended the lead 18 seconds later with his 12th. The Thunderbirds took the lead after goals from Dryden Hunt and former Penguins Paul Thompson and Ryan Haggerty. Jan Drozg tied the game in the final minute of the first period with a power play goal, his second in the AHL.

Jake Lucchini, Roy, and Angello were all stopped in the shootout, and Casey DeSmith stopped one of two Thunderbirds shooters faced.

Chase Berger led the Penguins with 10 shots on goal as they outshot the Thunderbirds 41-32.

DeSmith took the loss with 27 saves on 31 shots.

The Penguins went 1-for-3 on the power play and 3-for-4 on the penalty kill.

• Jan. 3: vs. Hershey, 6-2 loss
Agozzino opened the scoring 6:53 into the first period with his 13th of the year, and the Bears tied the game seven minutes later.

The Bears scored four unanswered goals -- one on the power play -- in the second period to take the lead.

Agozzino cut the lead to three goals 56 seconds into the first period with his second of the game and 14th of the year, and the Bears sealed the win with an empty net goal.

Angello led with five shots on goal as the Penguins and Bears each recorded 32 shots.

Dustin Tokarski started the game and was yanked after 28:46 when he allowed four goals on 18 shots. DeSmith -- who was supposed to on his way to Montreal at the time but couldn't find his passport earlier in the day -- finished the game and stopped 12 of 13 shots. Tokarski was credited with the loss.

The Penguins went 0-for-4 on the power play and 2-for-3 on the penalty kill.

• Jan. 4: vs. Springfield, 6-3 loss
Miletic scored the first period's only goal, his eighth of the year.

The Thunderbirds tied the game 1:21 into the second period, and Adam Johnson regained the Penguins' lead with his fourth goal of the year. The Thunderbirds scored twice in the final two minutes of the period, the first of which came on a power play.

Angello again led the Penguins with five shots on goal as they outshot the Thunderbirds, 33-30.

DeSmith -- starting on a night in which he should have been backing up in Montreal -- was in net for the entire game, and took the loss with 24 saves on 30 shots.

The Penguins went 0-for-2 on the power play and 3-for-4 on the penalty kill.

Agozzino's two goals against Hershey came on his 29th birthday:

Bellerive's shot went up and over the goaltender:

• Matt Abt joined Nick Hart on the podcast: