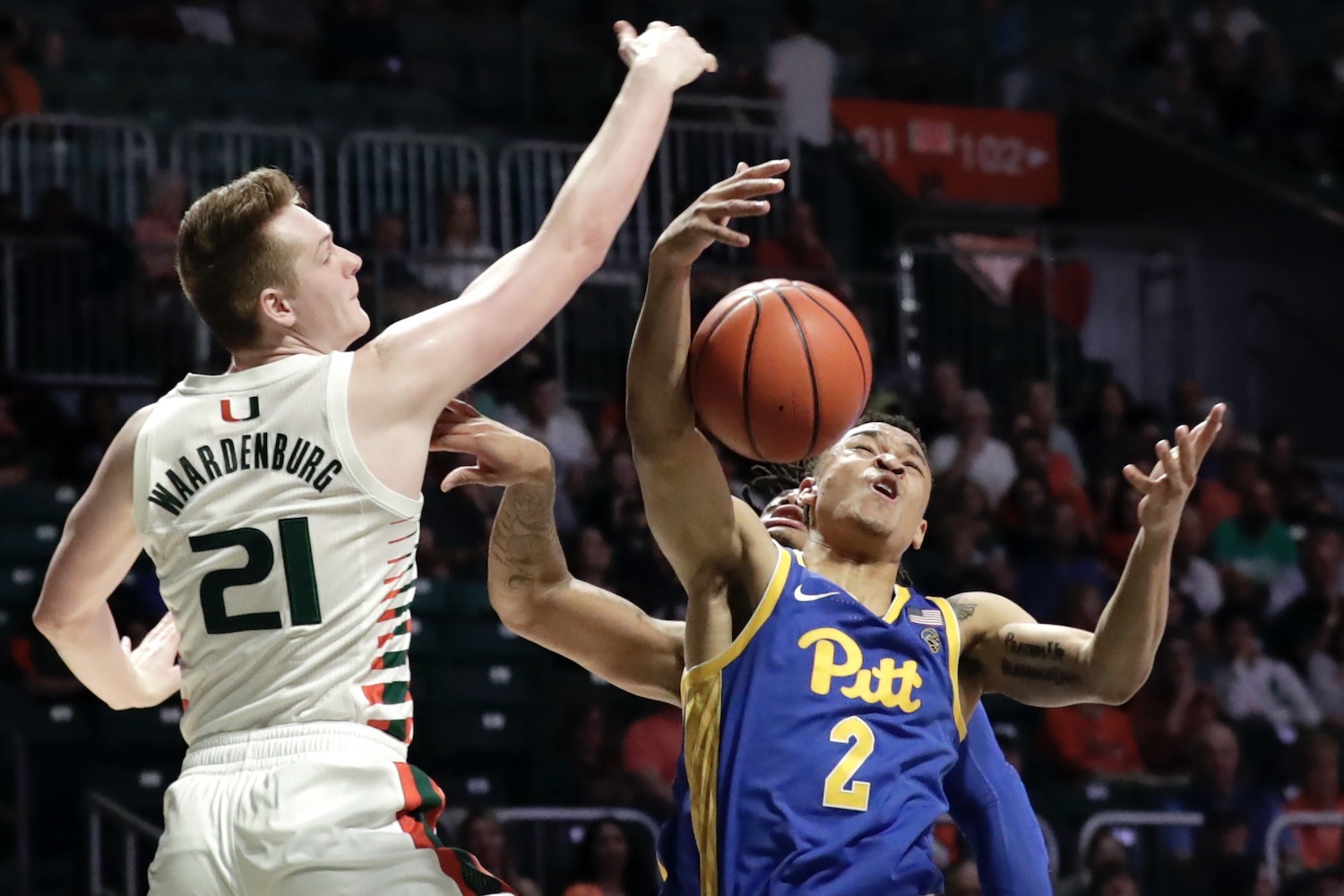 CORAL GABLES, Fla. -- Wanna see the highlight for Pitt in their 66-58 loss to Miami at the Watsco Center on this Sunday evening?

Prepare yourselves. Here it is:

That's Trey McGowens drilling a 15-foot jumper and tying the game at 18 with 9:25 to go in the first half.

Definitely. But that's also as good as it got for the away team. Pitt never led in this game — coughing up the first 16 points will do that — and they tied the game precisely once. There it is up there. It wasn't enough.

On this day, none of it was enough.

"It’s not worthy of winning, and the basketball gods don’t reward you for that," Jeff Capel was saying of his team's effort and energy.

So let's focus on that: Effort and energy. It's tedious to pore over stats and the obvious narratives. Pitt shot 36 percent from the field, including 19 percent (3 for 16) from three in this one. They committed 11 turnovers. None of that is ideal.

But where effort and energy are concerned, what's the deal there? That's controllable. And that, above all, reigns supreme coming out of this one. Because don't forget:

• Pitt cruises into Chapel Hill, N.C., to wipe out North Carolina on the road, 73-65, for the team's first ACC road victory in almost three years ... then loses to Miami on Sunday.

It's not like this possibility — that Pitt would be too caught up in a big win to move on — is new to Capel and company. I literally asked him about it specifically before the game, and he told me it was a priority (to avoid) for the team.

"That's a great question and something that's really important," Capel replied at the time.

The interesting layer here is that Pitt has shown an ability to move on from losses.

So ... What's going on after big wins? If this program is expected to elevate to the next level, it can't get consumed by its own greatness every time it beats a Florida State or a North Carolina then give up 16 free points in the next contest. That just won't work — particularly as conference play continues to heat up throughout this 2019-20 season.

I asked Capel about it after the game here:

"It wasn’t what’s required in order to win, especially on the road," Capel said. "It’s not what’s necessary. One of the things that we talked about in our program is that there [are] certain requirements to become good. And we didn’t do the things necessary to do that tonight, so we weren’t worthy of winning.”

That's not it. Not quite. That's a good answer from Capel in a general sense, but it doesn't quite strike the heart of what we're after here.

"We just have to be ready in warmups, starting in warmups," Terrell Brown was saying after the game. "I saw it, I tried to talk to people, but it's kind of something players have to take into account for their own."

We're getting warmer. I took the idea to McGowens. What does "starting stronger" really mean?

"Umm ... I would say the UNC game. Everybody just kind of came together," he replied.

Still not it. That comeback effort against the Tar Heels is a solid example of what this team can do when it's clicking, no doubt, but it still doesn't quite dig into the grander point here.

I went back to Brown, as directly as I could, in search of that answer. First, did that North Carolina win linger?

So how do you fix it?

"[We'll] practice tomorrow and be ready for our next game," he finished.

That's it, then. Move along. Do not pass "Go." Do not collect $200. It's as routine as that for these Panthers, a simple move forward with nothing deeper granted in the wake.

This loss is what it is: A young team struggling to shake off the effects of a big win against a better-than-advertised foe.

"I think their record’s a little bit misleading in the league," Capel was saying of Miami. "Their three losses have been twice to Louisville … and then their third loss is to Duke, who obviously is one of, if not the best team in the country."

Sorry to cross sports on you for a moment, but the scene reminded me of one game — a Steelers Week 15 loss to the Bills at Heinz Field — in the aftermath. That loss marked the first of three consecutive defeats that doomed the Steelers season, and while nobody knew it at the time, there was an air about that particular stumble. When asked to define the loss, the players and coaches really ... couldn't. At least, not in a way that'd satisfy a hungry audience.

"They were able to execute when it really mattered," T.J. Watt was saying of the Bills back in mid-December following the Steelers' loss at home. "Credit to them. They're a really hard-nosed, gritty football team that was able to run the ball."

“This one’s gone. We lived it,” Mike Tomlin added in his postgame press conference. “There’s scarcity in this business … There are no seven-game series and things of that nature. So we respect what transpired tonight. We understand it. And there’s nothing we can do about it as we sit here but get focused on our next opportunity. We will do that. I promise you that.”

See how Watt's and Tomlin's answers here are similar to Capel's or McGowens' or Brown's? Every now and then in sports, you don't need to go searching for some divine point or some deeper meaning. The other team will execute better some nights. Other times you'll come out flat.

Tonight, these Pitt Panthers came out flat. While the trend is undeniable and the team needs to fix it — a point well-taken by Capel and his players alike — there's no need to dig too far into this one.

"Disappointing loss for us," Capel said. "I thought we had an amazing opportunity coming off of a big win to go on the road and have an opportunity to get another one. And we didn’t have the maturity level necessary as a group, all of us. Every one of us — coaching [staff], everyone — needs to move on to the next play. And until we learn that in our program, then we won’t become the consistently good program that we’re striving to become."