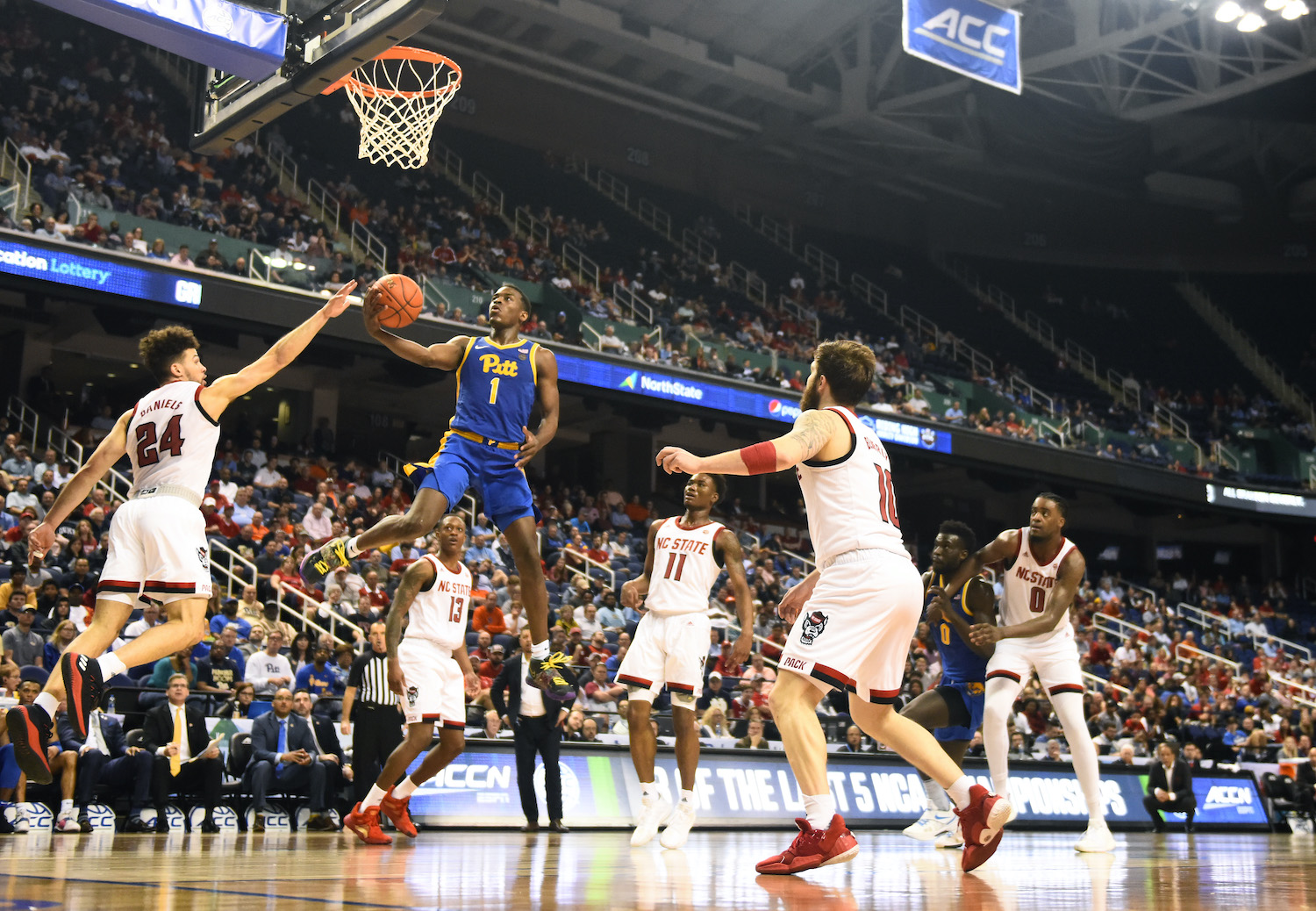 The Pitt Panthers were blown out by North Carolina State, ending their season at 16-17. But there’s reason to smile.

Yeah, that can be tough to digest after a blowout, 73-58 loss to North Carolina State down here at Greensboro Coliseum to bring the season to a whimpering end, but the signs are everywhere.

And I’m not even talking about Jeff Capel, the highly touted head coach captaining the ship. I’m talking about this: Justin Champagnie, the freshman standout who just put up 31 points in the team’s opening-round win down here over Wake Forest, fielding questions after their loss to North Carolina State and saying all the right things.

I mean, all the right things. I lobbed him a softball:

“What’s the highlight of your season? What’s something you look back at and smile?”

“I mean, just getting to stay with my teammates,” Champagnie said. “I love all of them, especially the seniors. They played a big impact on my game and who I am as a person. I look up to them. I think that’s just a highlight of my season, just being with them and getting to know everybody on a personal level. These are my brothers for life, so that’s the best part of my season.”

That’s selfless and classy, and my goodness, it’s coming from the mouth of an 18-year-old player. Champagnie was named MVP during the team’s championship run through the Fort Myers Tip-off tournament earlier this season. He scored 30 against Georgia Tech in a win back home at Petersen Events Center. He was coming off a career-high one game earlier in his first ACC Tournament action.

He did this just Wednesday against North Carolina State:

That Champagnie putback was just filllltttthhhhyyyyy

And that’s the response he gives. Pitt got a good one with Champagnie, but such an answer also brings the magnifying glass back upon the sophomore duo of Xavier Johnson and Trey McGowens. Those two burst onto the scene as freshmen a year ago, and many felt they were the answer to Pitt’s woes: Two dynamic scoring guards with athleticism for days, equally likely to pick your pocket as they are to flush it at the other end with a roar.

Then came the 2019-20 season and … eh. I haven’t blared the “regression” horn all season, and I won’t start now, but the two disappointed and failed to meet expectations. There’s no doubt about that.

But check this out:

“We had our spurts [this year],” Johnson, fresh off a 15-point, eight-rebound, eight-turnover, nearly-fouling-out disappointment said. “But I guess when we had our mental losses and dudes got caught up in [themselves] — me personally, too. I’ll be honest. We got caught up in ourselves, listening to outside people, so, I mean, that just broke us up completely.”

Wait, did Johnson really just admit to getting caught up in the outside noise and losing himself a bit?

He sure did. And McGowens doubled down later. Asked what changed after the team beat Georgia Tech at home and went on its seven-game skid to close the regular season, McGowens offered the following:

So what does that mean? Guys were stat-chasing? Guys were too focused on the critics and the naysayers?

Take that as alarming, take that as you will, but my takeaway is this: Capel and company have a self-aware group here. It’s frustrating when McGowens (four) and Johnson (eight) combine for 12 of the team’s 14 turnovers in a win-or-go-home game in the ACC Tournament. No doubt. It’s doubly frustrating when their play all season lagged behind expectations.

But these two get it. They really do. Their play on the floor, when they engage “hero ball mode” comes from a good place, even when the results don’t follow. They want to win and to improve. I mean, this is Johnson when asked if he’s going to take some time off now after being eliminated:

Couple that with Champagnie’s attitude above. And now allow me to hammer home this point one more time:

Next year’s Pitt Panthers will look nothing like this year’s. Count on it.

There’s four-star power forward/center John Hugley on his way. There’s 6-foot-10 Max Amadasun and 6-foot-8 Noah Collier, both three-star players with length and upside. Oh, and there’s Ithiel Horton waiting his chance to actually lace ’em up, too. Horton, a transfer from the University of Delaware, had to sit out this season due to NCAA transfer regulations, but early signs are glowingly positive for his game and how he can impact next year’s team.

Know how I just said this is a self-aware group?

This is Johnson’s answer when asked what excites him about next year:

“The new recruits,” he fired back, zero hesitation in his delivery. “As coach said, IT [Ithiel] better come soon. I’m pretty sure he’s hyped and he’s going to be ready to work this summer, and all the new guys, they’ve all been hitting me up on Instagram and stuff. They’re all excited, so that’s good.”

And, sure, I know I said it’s not all about Capel earlier, but it is up to him to lay that foundation of a winning, team-first basketball team. That’s been missing in this city, and it’s his mission and his duty to bring it back. Eric Hamilton, a graduate senior who just played his last college game, instantly felt and identified that sense of culture Capel’s tasked with revitalizing.

“Coach [Capel] is implementing the right culture,” Hamilton said after this one. “It’s not like the culture that we have here is wrong by any means. Coach Capel knows what he’s doing. I 100 percent trusted him this year. He’s, over anything else, he’s a winner. But it takes time. You’re not going to just come in and take a program from zero wins in the ACC and next year you guys jump to first, second or third. It just doesn’t work like that.”

“Every single year he’s just going to continue to improve and implement his culture and he’s just getting guys that just fully believe in what he’s trying to accomplish,” he said. “I’m pretty sure once he gets those guys that are willing to do that — and I’m not saying that the guys that we were with this year aren’t — but once that becomes 100 percent implement, and it’s fully believed throughout everyone, I fully believe that Coach Capel could be competing for the ACC Championship in the very near future, with future teams.”

More talent is on its way, and it’ll immediately mix with a more experienced, growing and developing group that understands exactly what’s expected — no, demanded — of them moving forward. From 14-19 to 16-17 is OK. From 3-15 in ACC play to 6-14 in ACC play is an improvement, too. But …

“We want to take leaps instead of steps, because, you know, we don’t want to be at the bottom of the ACC no more,” Champagnie said. “It kind of sucks to lose.”

Yeah, it does. And how this program’s trending, there will be even less of that losing stuff in 2020-21.

• All that up there is more important than this game itself. Pitt players confirmed they were burnt out — again — after giving a full, 40-minute effort to wipe out Wake Forest in the opening round of the tournament. That “wall” still lingers, and it’s something they’ll have to figure out how to overcome in 2020-21 and beyond.

“We felt it. We felt it,” Champagnie was saying of the quick turnaround. “I woke up this morning, I was really tired and my body was just kind of achy. It’s just preparation, rest, and we just gotta come out here and fight no matter how much time we have between games.”

“It does affect [you],” Johnson added. “My legs are a little bit weaker than what [they were] yesterday. But, I mean, you just gotta work through it. We worked all through the summer, some [days you’d have] weak legs, come back every day and work out.”

• On the other side, North Carolina State put together a well-rounded effort, with four scorers in double figures, Devon Daniels leading the way with 23.

• Want some more self-awareness from Johnson? Asked what he needs to work on the most this offseason:

“The main thing is my jump shot,” he said. “I think my jump shot is still not there to where it has to be at this level.”

• The red flags certainly perk up when McGowens and Johnson acknowledge the distractions and the me-first attitude. One thing I’ll add is this: While Johnson has been quick to put blame on himself and accept that responsibility (he did it after the Wake Forest loss much earlier, back in January, too, you’ll recall), McGowens seems less engaged on that front.

But count me in among those eagerly tracking his offseason — and whether he’s part of the team next year.

• Au’Diese Toney, after rolling his ankle badly a day earlier in the team’s Round 1 win, returned to the court for 31 minutes, but his play suffered at both ends. He clearly grimaced and hobbled at times, jogging when he normally sprints and hustles. Toney’s game is built around that energy and that “balls to the wall,” as Hamilton would put it, attitude, but it just wasn’t there today. He scored just four points and added two rebounds, a steal and a block.

“I mean, yeah, it [the injury] affected him big time,” Johnson said. “I could see it. Coach could see it. I don’t think he was himself. I could see him kind of limping and kind of, like, jogging a little bit, but I know next year it’ll be better for him.”

• Hamilton appeared to fight back tears as he offered the following final thoughts on his season and, as a result, his career:

“This is a special team, you know? We didn’t quite finish how I wanted to. We’re really talented and stuff like that, but it was a young team and so we had our ups and downs. But we definitely, definitely improved from last year but not quite where I wanted to be, because I definitely wanted to make the NCAA Tournament or the NIT. It didn’t work out like that, unfortunately.”

• Just as a final sprinkle on the “Hey, next year will be better” sundae, freshman Abdoul Karim Coulibaly scored three points in 10 minutes and added some needed enthusiasm, out-playing the older, more experienced Terrell Brown for the second straight game. Brown, by comparison, logged just four minutes after playing three in Round 1 due to Coulibaly’s success.

That torch has been passed. Coulibaly cares, and it’s evident every time he takes the floor. There’s a passion to his game, but there’s also skill and finesse not often seen in a big man. He’s still acclimating to the college game in America — and to, you know, speaking English — but his resume steadily got stronger throughout the season. Give him another summer, and Pitt might just have something there, too.

And for Kevin Keatts’ Wolfpack:

That’s a wrap on 2019-20 for these Pitt Panthers. Next up: Potential roster moves, transfers — and they still have an open scholarship to fill, too. I’ll have that coverage as it develops.