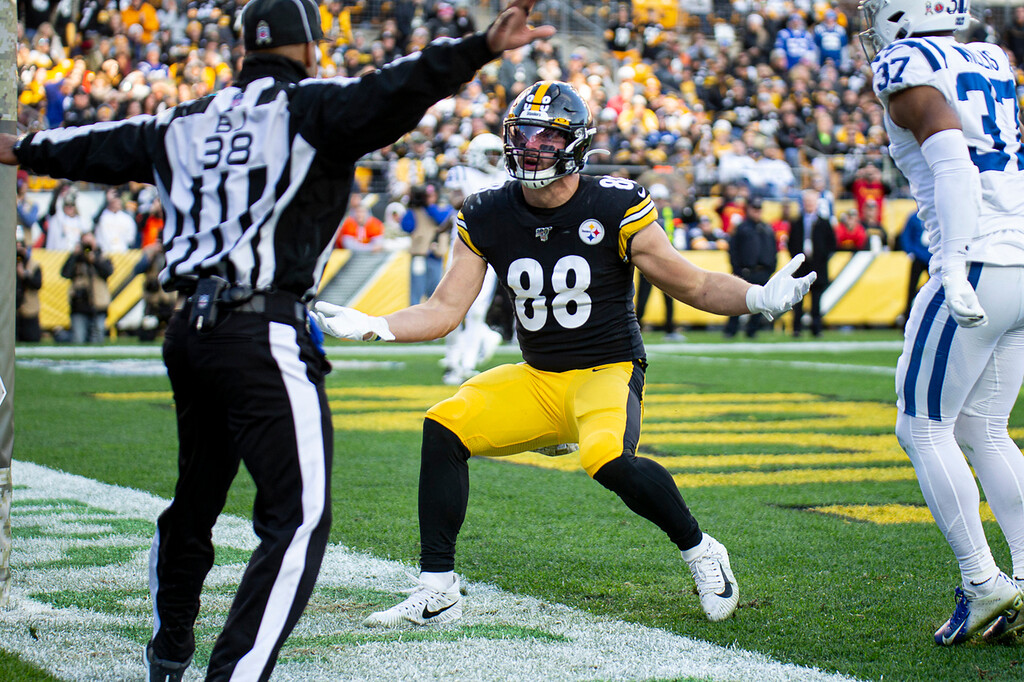 Nick Vannett said that — and I have the video, shot from the Steelers’ locker room following their Week 4 win over the Bengals at Heinz Field. It was Vannett’s first game as a Steeler after being traded from the Seahawks for a fifth-round pick and, coincidentally, also the Steelers’ first win of the 2019 season.

So spirits were high when I asked him how it all felt, to be in Pittsburgh, to put on that black and gold and to run out in front of those fans:

It was everything we heard from Vannett from Day 1 in the Steel City. He was swarmed by media after practice upon his arrival, and he fielded questions with smiles and enthusiasm, even throwing in a few jokes and some Browns slander just to fully endear himself to Steeler Nation.

“I mean, growing up in Columbus, Ohio, there’s so many Steelers fans,” Vannett was saying. “That’s all you see is black and yellow. It’s either that or Browns fans, and obviously I’m not going to be a Browns fan.”

“Black and yellow” faux pas aside (and you’ll notice he corrected it in the video above) it was clear Vannett was feeling refreshed and rejuvenated after leaving Seattle.

So what’s this all about?

“I can’t say I have too many great things to say about that organization just from my time being there because it wasn’t the most pleasant experience I’ve ever had,” Vannett was telling reporters … in Denver, about the Steelers, after being signed by the Broncos during the 2020 free agency period.

To fully understand Vannett’s position, you have to rewind the tape all the way back, to Day 1 in the NFL.

Vannett, who was considered a top-five tight end prospect in the 2016 NFL Draft, was selected in the third round by the Seahawks. After playing four years at Ohio State, Vannett brought plenty of tape and pedigree to the table.

At the 2016 Senior Bowl, Vannett elevated his stock, showing off his strong hands and ideal size, even drawing comparisons to Rob Gronkowski in the process. The guy’s nickname is “Baby Gronk,” after all. It’s a lofty comparison, but it wasn’t an accident. It was hasty to be certain, but Vannett, at 6-foot-6, 260 pounds did have ideal size. And he did show off a unique ability to do it all from the tight end position.

This context matters, because when Vannett arrived in Seattle … meh. He caught three passes in nine games as a rookie, 12 in 15 games as a sophomore and 29 in 15 games in Year 3. Clearly, “Baby Gronk” was not Gronking in Seattle.

“I always felt like toward the end of my tenure with the Seahawks, I felt like I was slowly getting kicked to the curb a little bit,” Vannett said. “They had another guy, a young guy they brought in, [Will Dissly], they were pretty high on and they kind of saw him to be my successor.”

So when the Steelers came knocking, Vannett felt it was his time to finally live up to the nickname and, more importantly, to showcase the abilities he truly felt he possessed.

Here’s Vannett again, on Day 1 at the Rooney Complex:

“Even since the Heath Miller days, when I was in high school and middle school, just kinda watching him thrive in this offense, watching [Vance McDonald] thrive, Jesse James and all the other guys that have played before me,” Vannett began. “Man, they utilize their tight ends here and that’s something I’m not used to where I’ve been, even college. I just can’t wait to show the player that I am in all aspects — run game, pass game, pass protection.”

It’s clear what happened here: Vannett thought he was finally getting his chance to shine … then the spotlight never sparked. He caught 13 passes for 128 yards and zero touchdowns in 13 games with the Steelers, toiling away in the NFL’s second-worst passing offense and third-worst offense overall.

He caught two passes for 28 yards in that debut against the Bengals then never caught more than one pass in a game until a Week 15 loss against the Bills, when he caught five for 40 yards. In three games — Week 12 vs. the Bengals, Week 14 vs. the Cardinals, and Week 17 vs. the Ravens — Vannett didn’t even see a target.

For a guy who felt underutilized but who also felt his time had finally arrived, this stung. Bet on it.

Add into this the fact that many felt Vannett might be coming back to Pittsburgh for another year (or more). He did show some promise at times, and it seemed he did have potential to become that James/Matt Spaeth-like, reliable, do-a-little-bit-of-everything No. 2 tight end.

Free agency opened, though, and there was no deal. Would the Steelers let him walk after just 13 games, sacrificing that fifth-round pick for a playoff-less 2019?

Yep. They made that clear when they signed Eric Ebron. With Ebron and McDonald in the mix, Vannett was pushed out the door. Any potential opportunity evaporated, and he signed with the Broncos one day later.

There, he’ll compete for playing time with 2019 first-round pick Noah Fant and Jeff Heuerman, a sixth-year player out of Ohio State. Early on, it seems Vannett understands his new role and has set reasonable expectations.

And speaking of being reasonable and measured, Vannett also flatly admitted that the Mason Rudolph/Devlin ‘Duck’ Hodges Steelers of 2019 might not have been the perfect representation of the “Steeler Way.”

“It seemed like I came into an organization where the wheels were starting to fall off a little bit,” Vannett said. “Guys were getting hurt, [Ben Roethlisberger] was down. So I feel like I never really got to experience the true benefits, the true atmosphere that the Steelers normally would have because I came in on a crazy situation.”

Yeah, that soundbite’s not as fun or as catchy as the first one, huh? But, just like everything else with Vannett from college to Seattle and beyond, it provides vital context.

Maybe he’ll find his footing with the Broncos.

Or maybe we’ll hear him humming a new tune during the 2021 offseason. Wouldn't be the first (or the second) time.