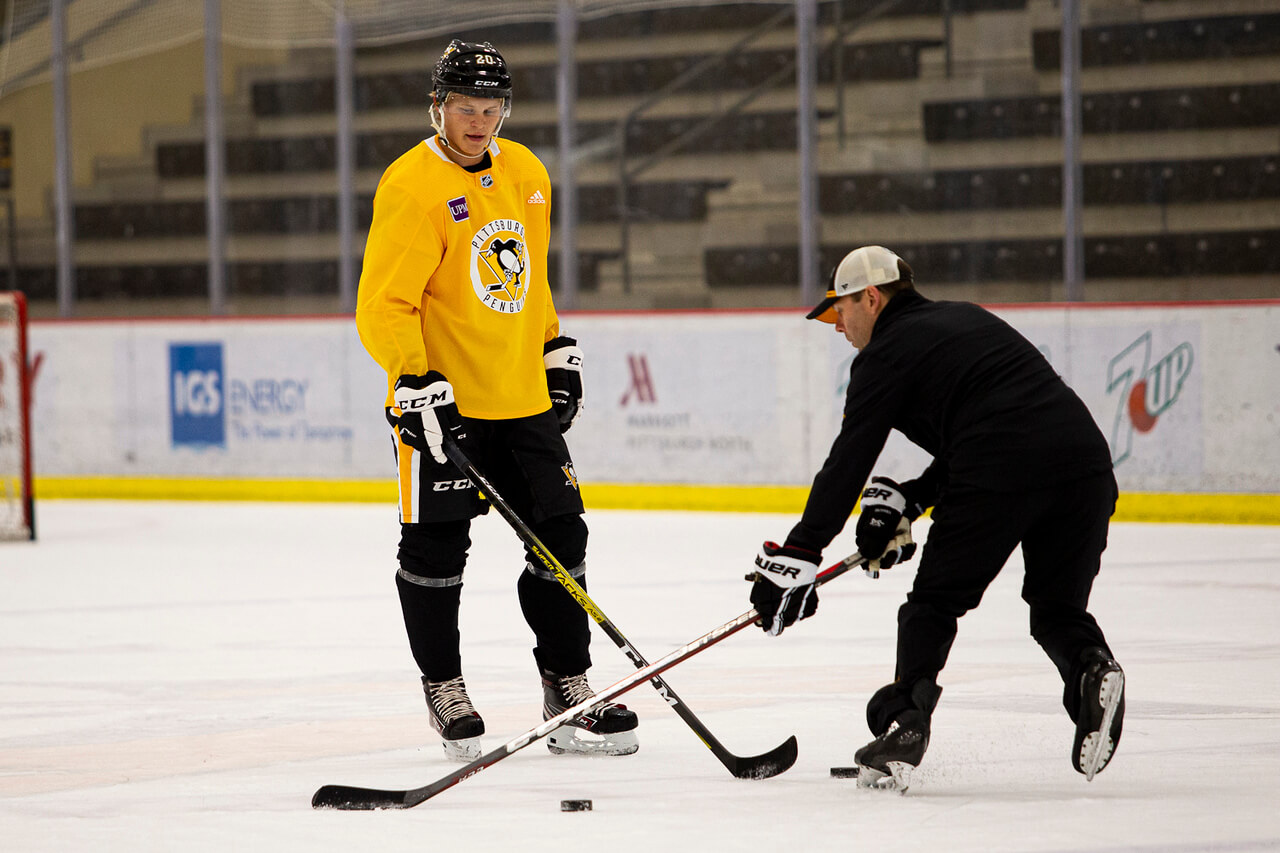 Ty Hennes is the Penguins' Swiss Army knife. He does it all.

Hennes, the Penguins' skills coach, will run the occasional NHL practice throughout the season with some specialized skills drills. When an injured Penguins player isn't ready to rejoin full practices yet and skates on his own before practices, Hennes is the guy skating with him. Right now, Hennes is leading the Penguins' informal skates in Phase 2 of the NHL's return-to-play plan, a role he spoke about with me earlier this week.

One part of Hennes' job that he finds particularly rewarding is his extensive work with the Penguins' prospects.

"It's the best part of the job, I think," Hennes told me this week of his work with the prospects. "You're able to work with guys from 18 years old, and maybe you see them in Wilkes-Barre at 20 years old, and then you see them in the NHL at 22. That pipeline has been pretty strong from Wilkes-Barre to Pittsburgh in the past. Getting to see those guys called up is pretty exciting."

Hennes, who is in his fifth season with the Penguins, makes regular trips to Wilkes-Barre each year. He estimates that he makes about 40 trips to work with the Penguins' AHL affiliate in a typical season, usually when the NHL team is on the road, since Hennes doesn't usually travel with the team.

Hennes makes trips to Wheeling during the year too. He'll run skills practices and work with the ECHL coaching staff, and even scout games and write reports on the Nailers' players for management.

This year Hennes wasn't able to spend quite as much time in Wilkes-Barre or help run as many practices in Wheeling, given that he was usually back in Pittsburgh working with the many injured players throughout the season. That didn't stop him from helping the Penguins' prospects from afar, though.

With the prospects, whether they be in the minor leagues or in juniors like Samuel Poulin or Nathan Legare, Hennes will create individual skill drill videos for each player tailored to each player's specific needs. If a prospect needs extra help with, for example, a particular facet of his skating or his hands, Hennes is aware of that and is able to help the player develop in that area by sending the player videos to replicate.

Hennes also works with management to learn what type of role they hope to see a prospect eventually take on in the NHL. He's then able to send the prospect drills that can help him develop into that type of player. Since Hennes regularly works with the NHL club, one way he can do that is taking videos of Pittsburgh players who serve similar roles working through the drill to show the prospect.

"If you have a guy like Kasper Bjorkqvist, you possibly see him as a net-front presence with net-front skills we hope him to have at the AHL level and hopefully NHL level," Hennes said. "We can send him drills that we've done with Patric Hornqvist. Not only can he see the drill, but he can see the guy at the NHL performing and executing these drills."

Hennes' work with the minor-league players isn't limited to NHL-contracted players or the true "prospects" either. Over the years players all the way down to the ECHL-contracted players in Wheeling have told me about what a luxury it is to be able to work with Hennes at that level, and how it's a benefit that comes with being in the Penguins' system even if you aren't a drafted player on an NHL contract.

“(Hennes) is working with the guys at the highest level, some of the best guys in the world,” Nailers defenseman Aaron Titcomb once told me. “To have him around and pick his brain and ask him questions, that’s teaching that I don’t think you can find anywhere else. I’m definitely lucky.”

When Hennes is making those trips down to the minors, he'll speak with those coaches ahead of time to learn more about what the needs of the team are.

"Are there areas of focus (the coaches) felt the team struggled with the past weekend? For defenseman, it may be puck retrievals. For forwards, it may be offensive zone entries or wall play," Hennes said. "That way, you're specific with what you do on the ice, and it relates to the messaging from the coach on that particular day. You just try to create that continuity and develop an effective practice for that team."

Hennes' work in helping injured players isn't limited to the NHL club either. Even if he can't work with an injured player in the minors in person, he'll still create videos for a player of things they are still able to do. Bjorkqvist, for example, was unable to skate for the majority of the season after injuring his ACL and requiring knee surgery in October. Wilkes-Barre head coach Mike Vellucci told me that Hennes worked with Bjorkqvist on his hands during the year.

"(Bjorkqvist) worked on other aspects of his game that we talked to him about with (Hennes), our skills guy," Vellucci told me in March. "We talked about working on his hands and his shooting. If that guy didn’t stick handle three or four hours a day, he was doing it five or six hours a day. He’s such a hard worker.”

Hennes said that with injured players in the minors, he'll send the player a series of videos related to one particular skill that progress in difficulty as the player continues to get better. They'll work on the same drill for a few days, then the player will take a video of themselves doing the drill and send it to Hennes before he sends them the next step.

"It creates accountability," Hennes explained. "But it also creates a video library for the players that are going through the rehab process. They're able to see their progression, their steps in development. It builds mental confidence showing where they started, where they are today, where they can be next week."

And with someone like Bjorkqvist, with whom Hennes worked all year, that progression in drills may happen a little quicker.

"Kasper is the most eager, attentive, hungry player to get better on the ice and off the ice. He's dialed in and hungry for more." Hennes said. "A skill series usually takes three, four days for a guy to get comfortable. He spends so much time on it. You have to be two steps ahead of Kasper, because you didn't know if it would be tomorrow or two days from now before he's calling asking for something more."

Seeing that drive from the young players who are so close to achieving their dream is what makes working with the prospects so rewarding for Hennes.

"The greatest thing working with these guys is you really get to know the players," he said. "They are kids. They are so hungry to learn, and how coachable they are. Whether they're in the NHL and willing putting in effort to stay and become a consummate NHL professional, or the players in the AHL that know they're so close, you're working with very internally motivated and driven athletes.